The National Archaeological Museum of Athens is one of the finest and largest archaeological museums of Greece. Founded at the end of the 19th century its primary role was to house the vast collection of the most important antiquities discovered across Greece, while preserving their historical and cultural value.

The Brief History of the National Archaeological Museum of Athens

The National Archaeological Museum was the first museum founded in the Greek state in 1829 after the liberation of Greece from the Ottoman Empire with its original address being the island of Aegina. The museum was later moved to its current location in the heart of Athens in 1866. With a generous donation of land from E. Tositsa and a substantial donation from the Bernardakis family from St. Petersburg, the museum with the architectural designs of Ludwig Lange and Ernst Ziller’s touches on its façade – took its final form and opened its doors to the public in 1889. 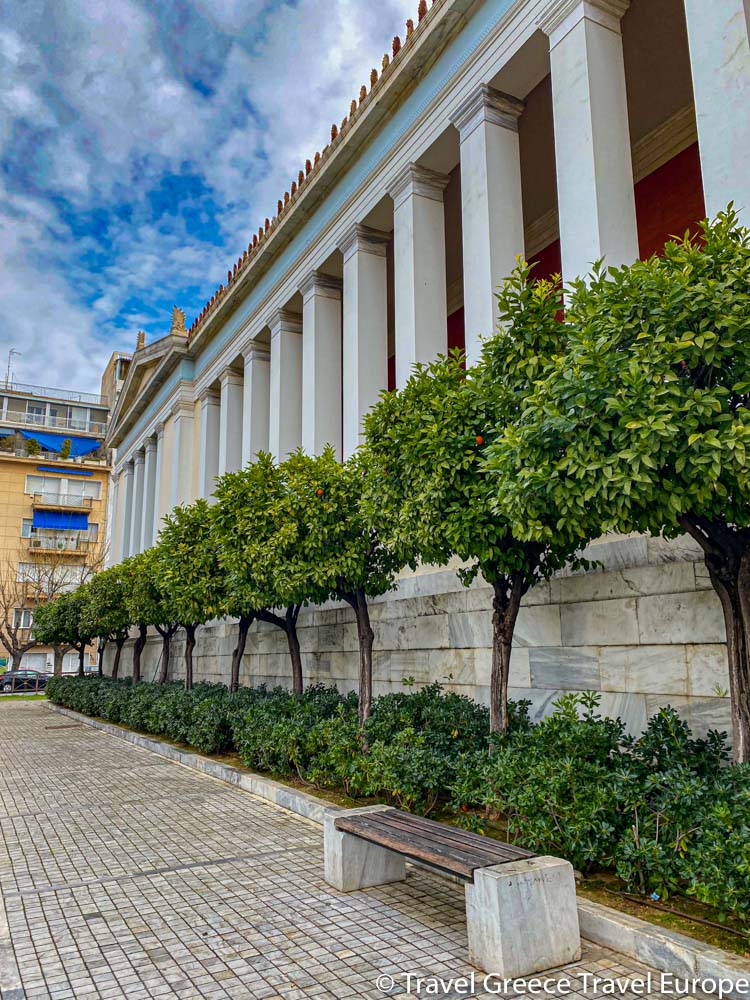 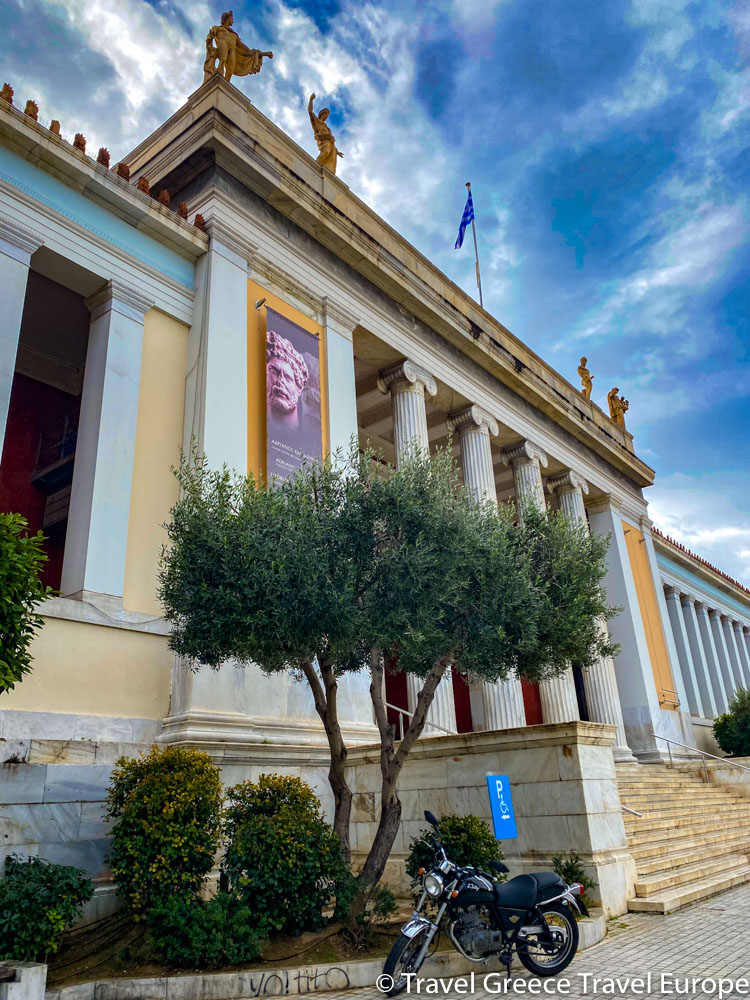 During World War II antiquities from the Archaeological Museum and other museums were packed in boxes and stored in the basements of the Museums around the country and other locations.

The National Archaeological Museum of Athens mainly houses excavations from the Attica region as well as other parts of the country. Its vast collection accounts for over 11,000 artifacts from prehistory to late antiquity.

Today in its 8,000 square meters of space visitors can admire a total of five permanent collections:

The Collection of Prehistoric Antiquities

This vast collection is dedicated to the prominent works of the advanced civilizations that developed in the Aegean from 6th millennium to 1050 BC. Exhibits include excavations from Neolithic, Cycladic and Mycenaean civilizations as well as findings from the prehistoric settlement of Thira in Santorini.

The early Cycladic culture spanned the 3rd millennium BC.

Due to their privileged geographical location in the middle of the Aegean between the two continents (Europe and Asia Minor) as well as the close proximity to Crete and the Greek mainland – allowed the Cyclades to control trade and communication throughout the wider region. Most finds of the Early Cycladic period (3200-2000 BC) come from burials. 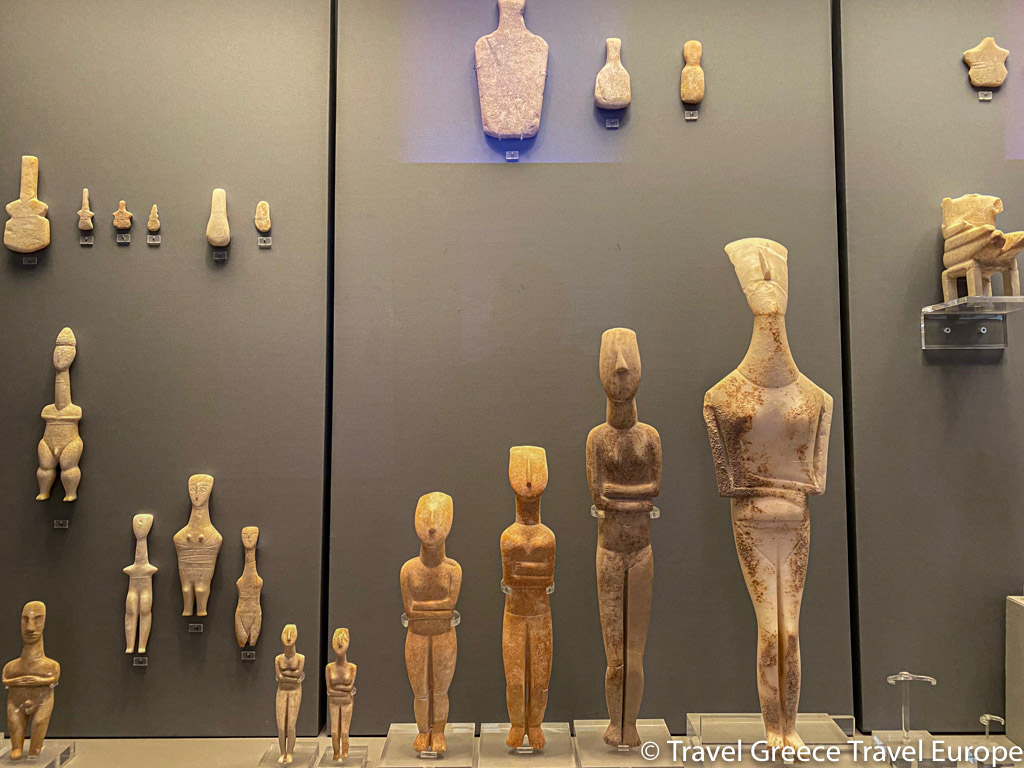 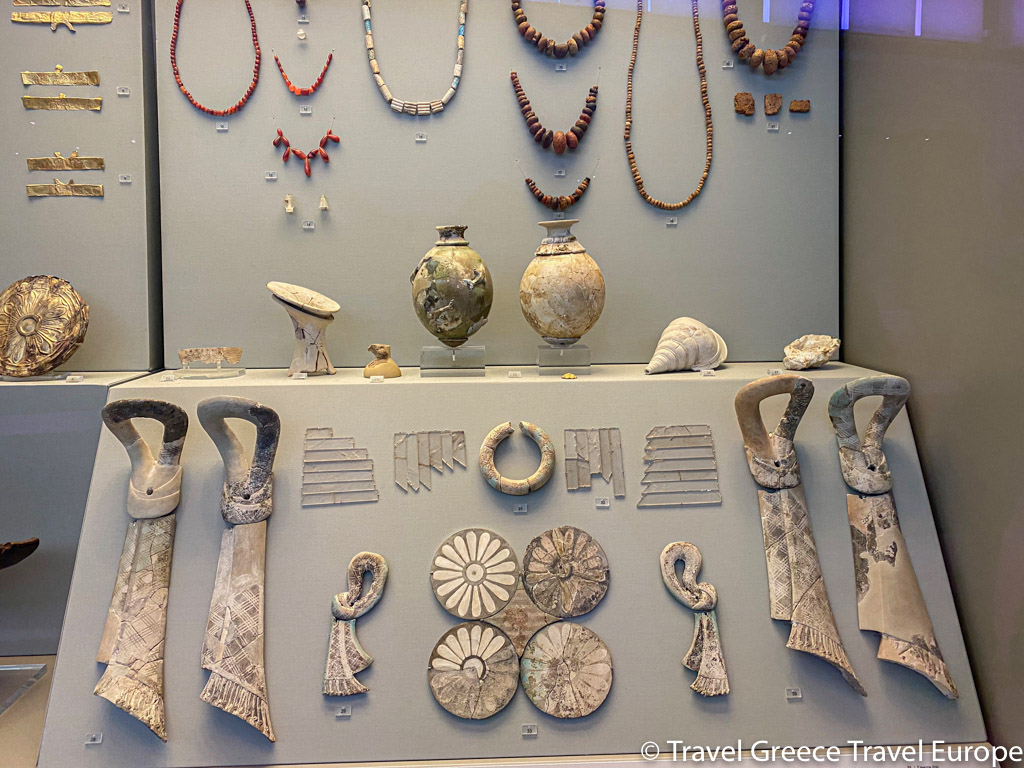 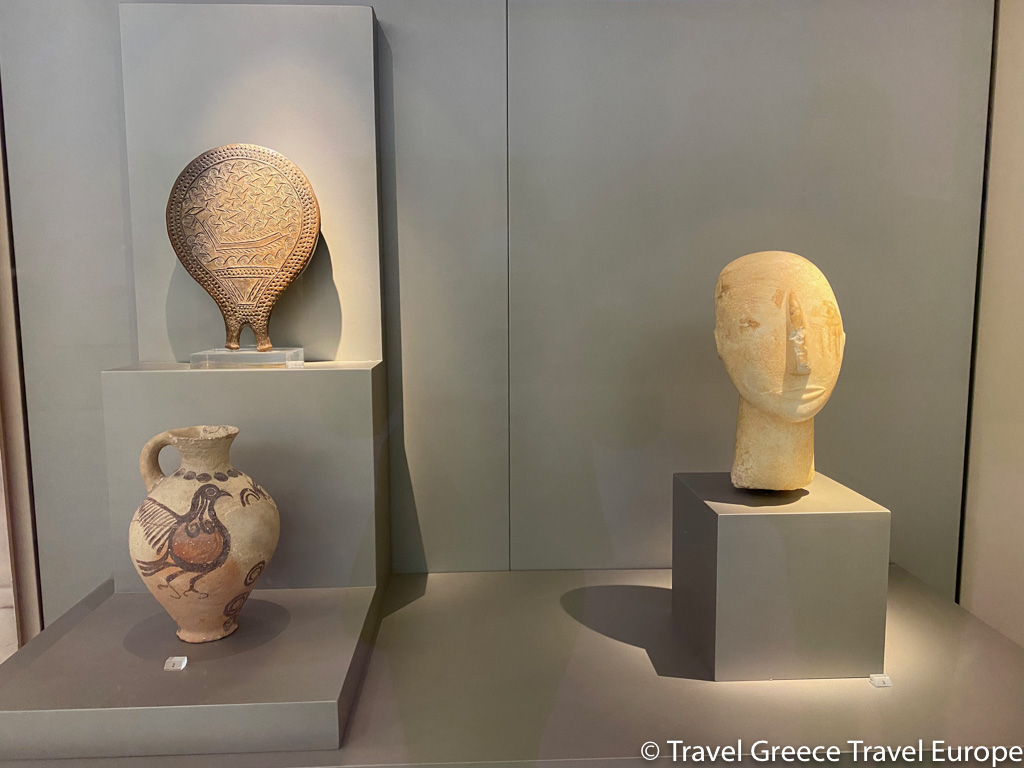 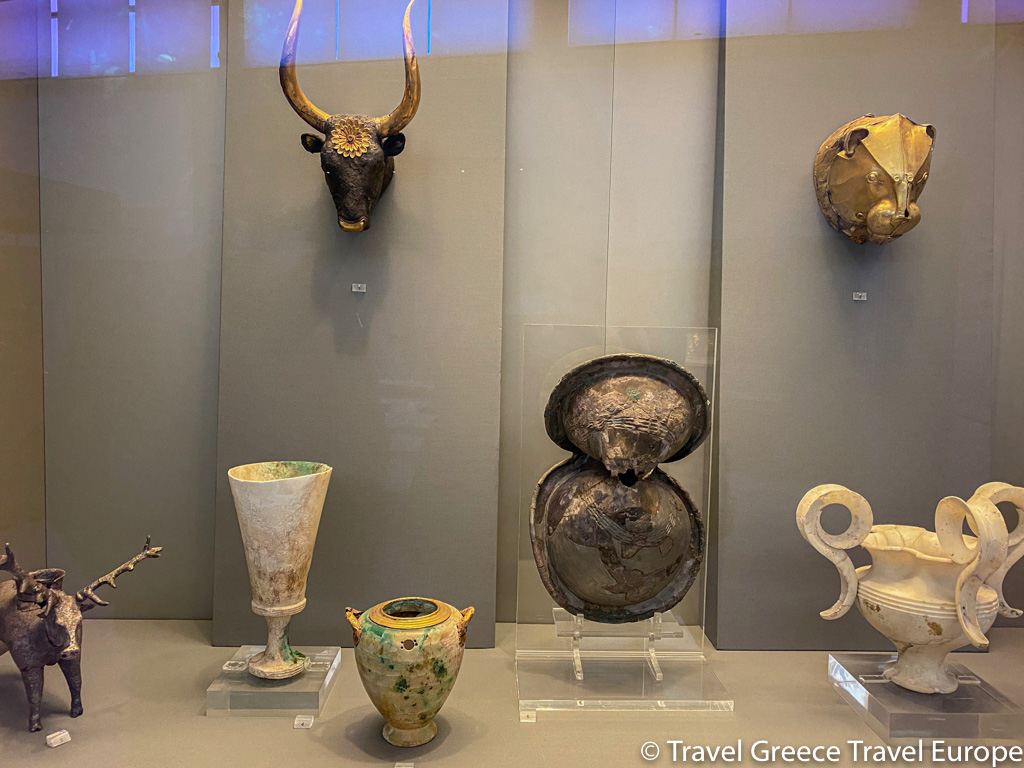 A notable collection dedicated to the frying pan vessels depict the most characteristic creations of the Cycladic Civilization. The frying pans which are shallow vessels made mostly of clay, with incised decoration on the exterior were discovered in graves. The decorative motifs depict symbols of the sea and sky in forms of spirals, circles with short rays, stars, triangles, fish and starfish. Their function remains unknown, yet most likely they were used for practical and ritual purposes alike. The most impressive examples of frying pans were discovered at the cemetery of Chalandriani on Syros. 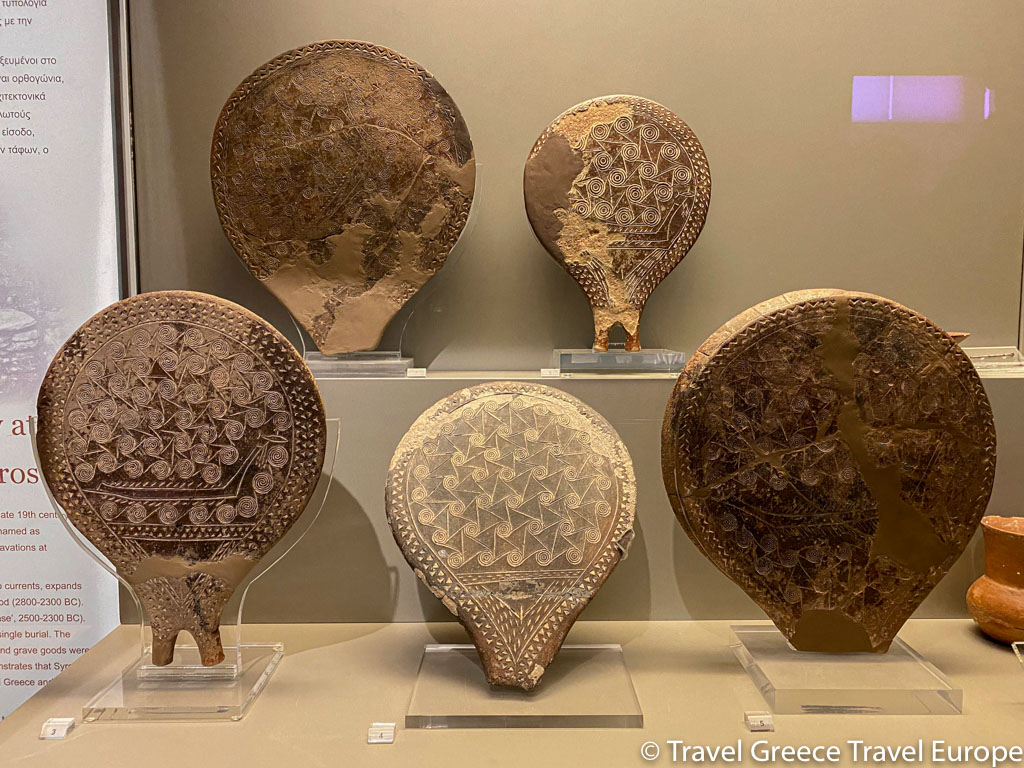 The origins of the Mycenaean civilization (1600-1100 BC), with its greatest center Mycenae in the Peloponnese, is known for its ruling warrior class who enhanced their relations with Crete’s Minoan civilization, thus importing materials, ideas and skills. 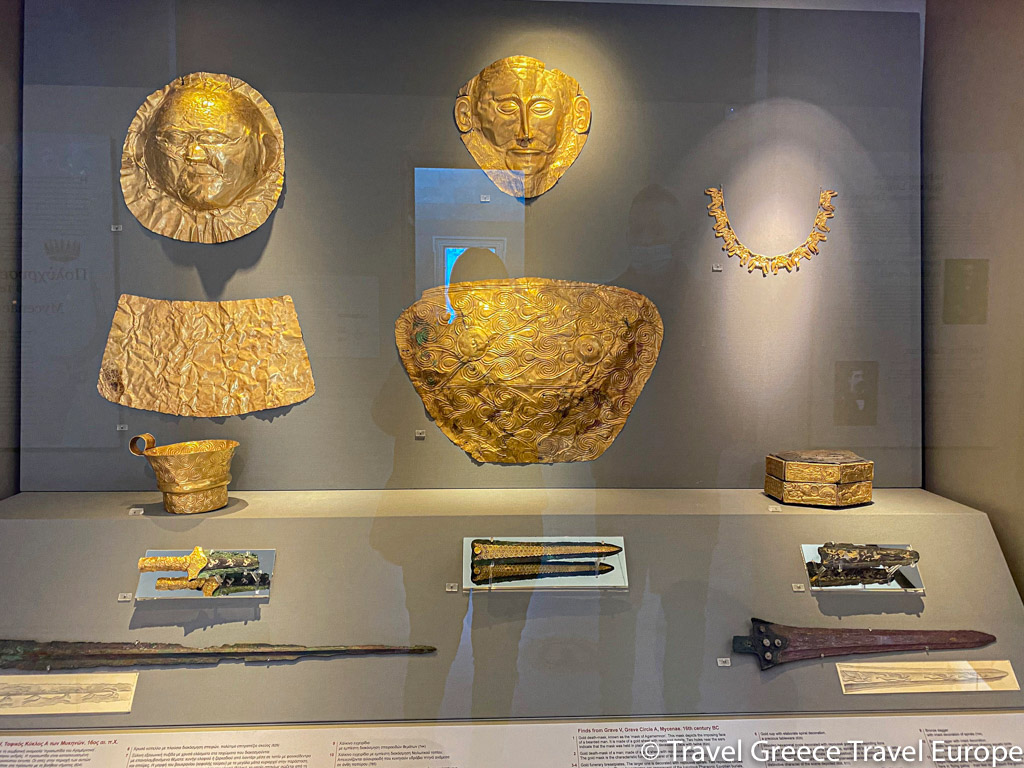 The discovery of Grave Circle A in 1876 by Heinrich Schliemann brought to light the great, unknown civilization, confirming Mycaenae’s importance during this period and verifying Homer’s description of Mycenae as “rich in gold”.

The Collection of Sculpture Works – the extraordinary collection unveils the evolution of ancient Greek sculpture from the 7th century B.C. until the 5th century AD. Today the collection numbers approximately 16,000 sculptures which come from public buildings of Attica, Eastern mainland Greece, the Peloponnese and the Aegean islands, as well as sanctuaries and necropolises. Also a significant number of sculptures come from Thessaly, Western Greece, Macedonia, Thrace and Cyprus. 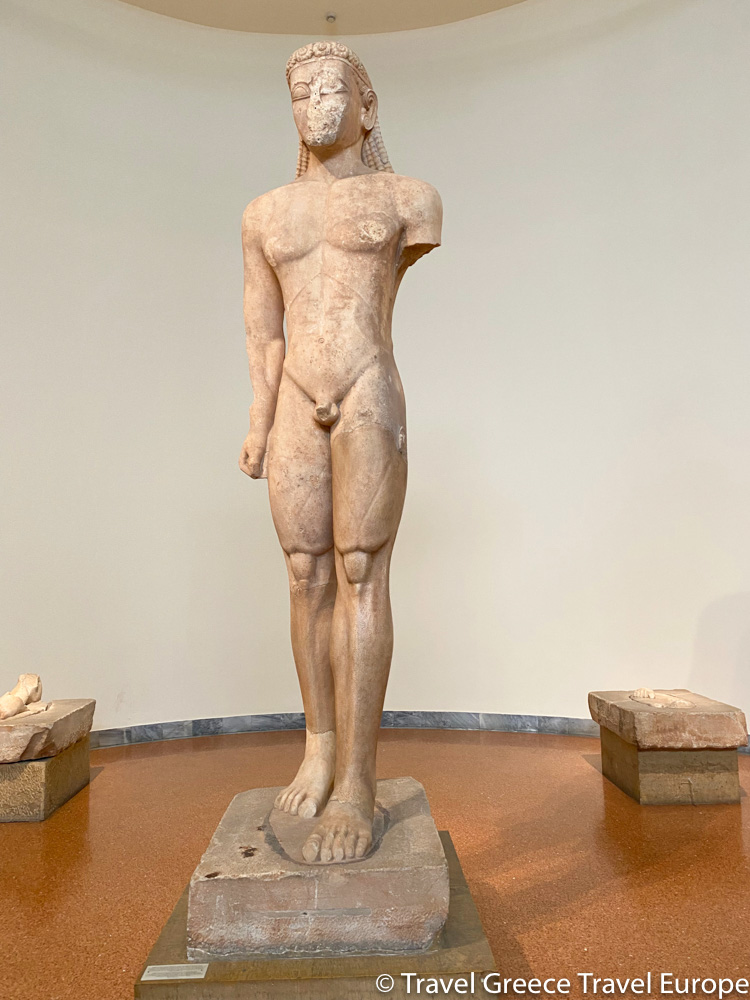 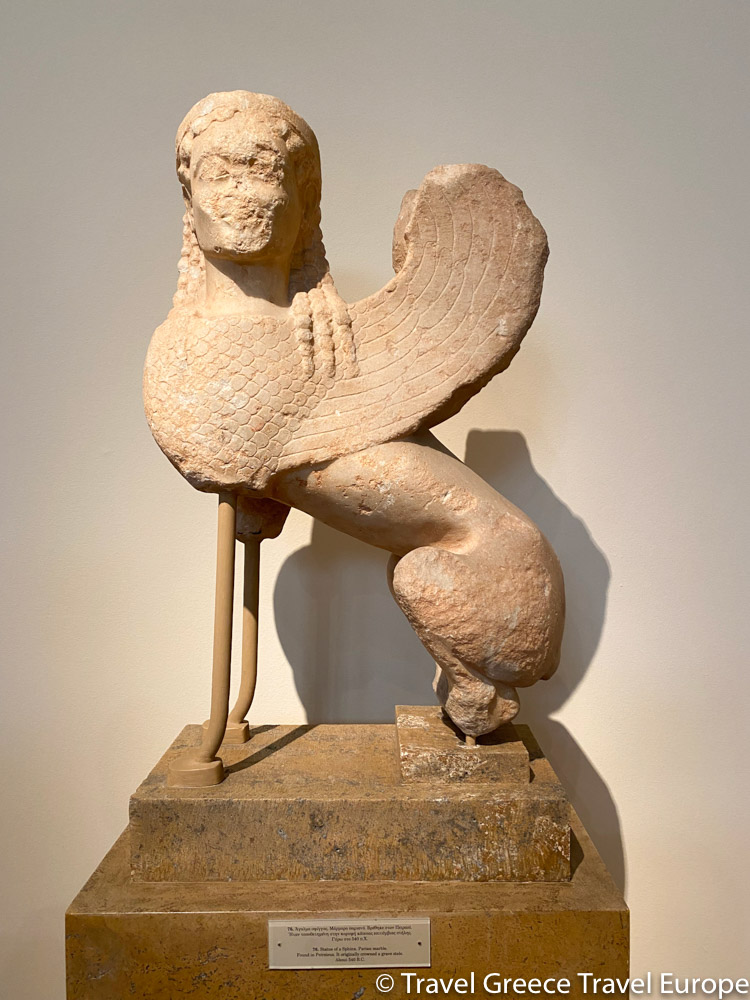 The ground floor of the museum, Hall 7-35 is divided into four sections dedicated to the Archaic, Classical, Hellinistic and Roman period.

The Collection of Metalworking Works is one of the richest collections of original works, statues, figurines and miniature crafts displaying the evolution of metal work throughout the centuries, the multiple artistic trends as well as the varied traditions, daily life, cults and beliefs of the people from Geometric to the Roman period.

The metalwork collection is housed on the ground floor of the museum Hall 36-39 and is divided into four segments – the introduction to Metal Work Collection, Geometric, Archaic and Classic Period.

The Vase and Miniature Collection boast over 6,000 representative works of ancient Greek ceramics from the 11th century. B.C. up to the 4th century B.C. Other notable exhibits on display are from significant sanctuaries of Sounio in Attica, Heraion of Argos in Argolis, among others. 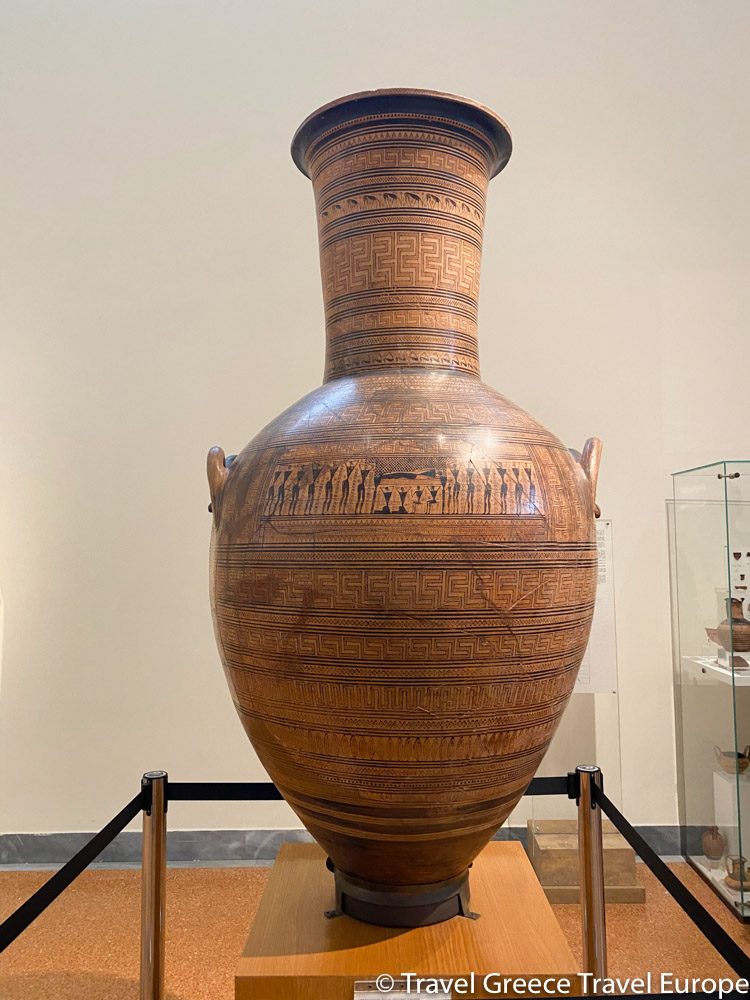 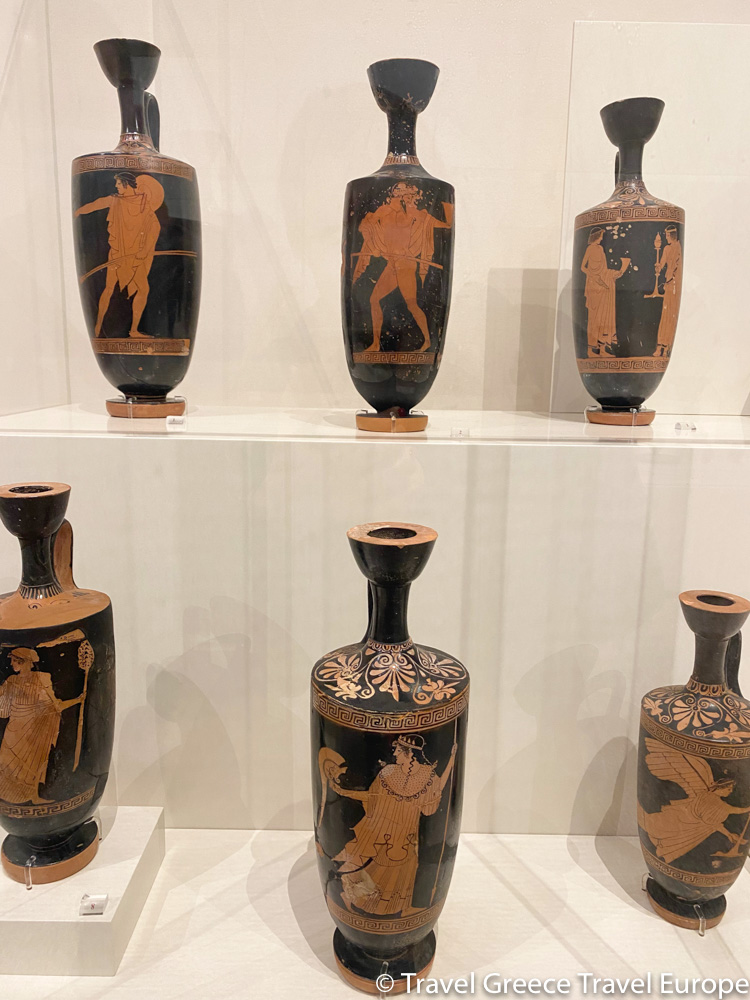 The imposing collection is found on the 1st floor of the museum (Hall 49-57) and is divided into four periods: Geometric, Archaic, Classical, and Late Classical/Early Hellenistic Period.

The Egyptian Collection holds a significant position in the National Archaeological Museum Athens, and its core is made of the significant donations of two Greek expatriates from Egypt, Ioannis Dimitriou and Alexandros Rostovich. The Collection was further enhanced thanks to the donations made by the Greek Archaeological Society in 1894, and the government of Egypt in 1893 as well as other smaller individual donations and objects found in excavations carried out across Greece. 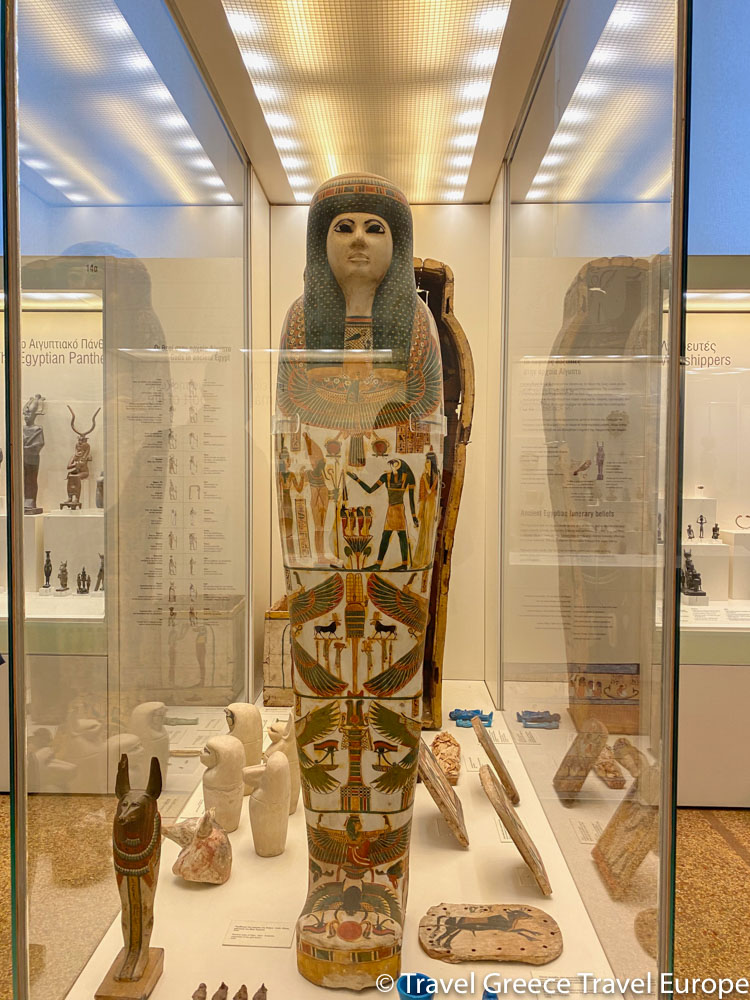 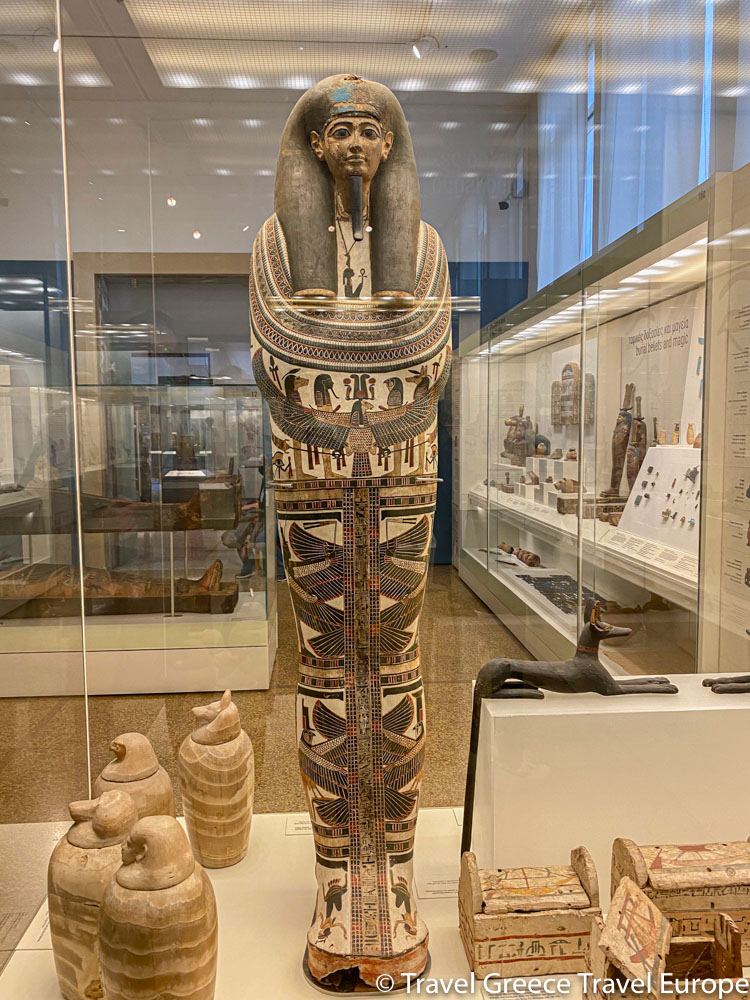 The prominent collection of the archaeological museums has many notable objects, below we list some of our favorites. 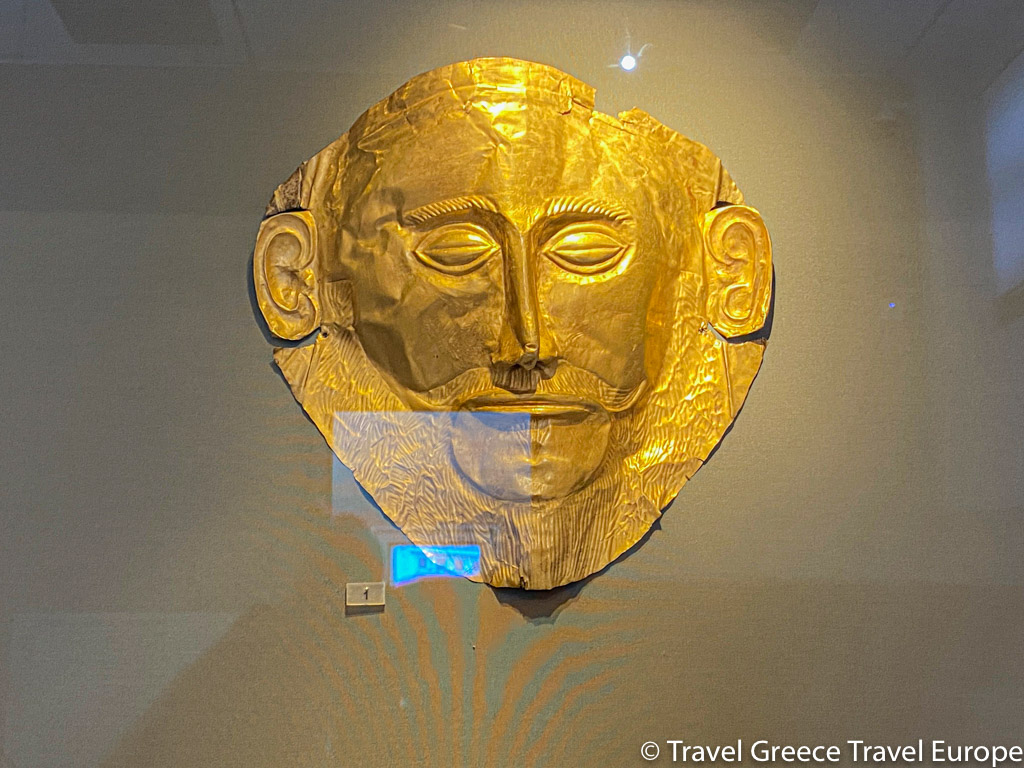 The original mask from the 16th century B.C. is housed in the National Archaeological Museum, a copy is on display at the Archaeological Museum of Mycenae. The hammered gold sheet depicts the imposing figure of a bearded man. The two holes near the almost cut ears were used to secure the mask over the deceased’s face with a cord. Schliemann attributed this discovery to Agamemnon.

Clay frying pan vessel with a depiction of a boat which showcases the great significance of seafaring. Discovered at the Chalandriani cemetery on the island of Syros. (Collection of Cycladic Antiquities, Ground Floor, Hall 3-6)

Spring fresco, the only fresco of Akrotiri, Thera, which was found intact, in place, extending onto three walls of the same room depicting the Theran landscape prior to the volcanic eruption. Room D2, Complex Delta. Akrotiri, Thera, 16th century BC. 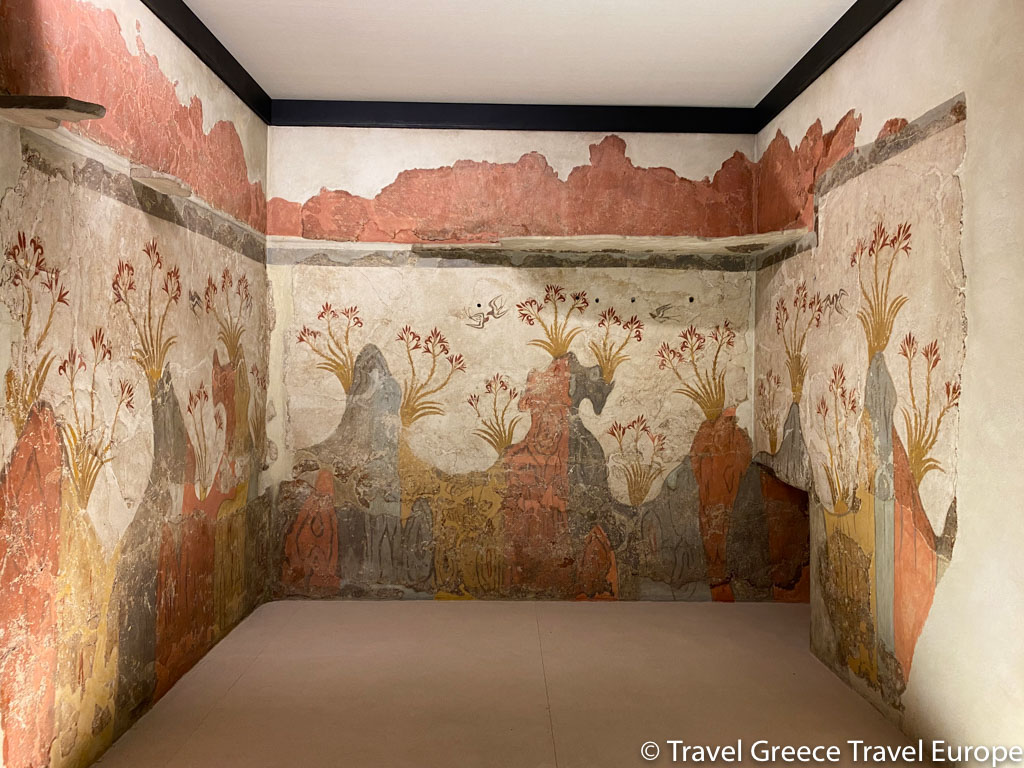 The Boxers fresco that portrays two naked boys wearing a belt and boxing gloves. Room B1, Building B. Akroteri, Thera, 16th century BC. 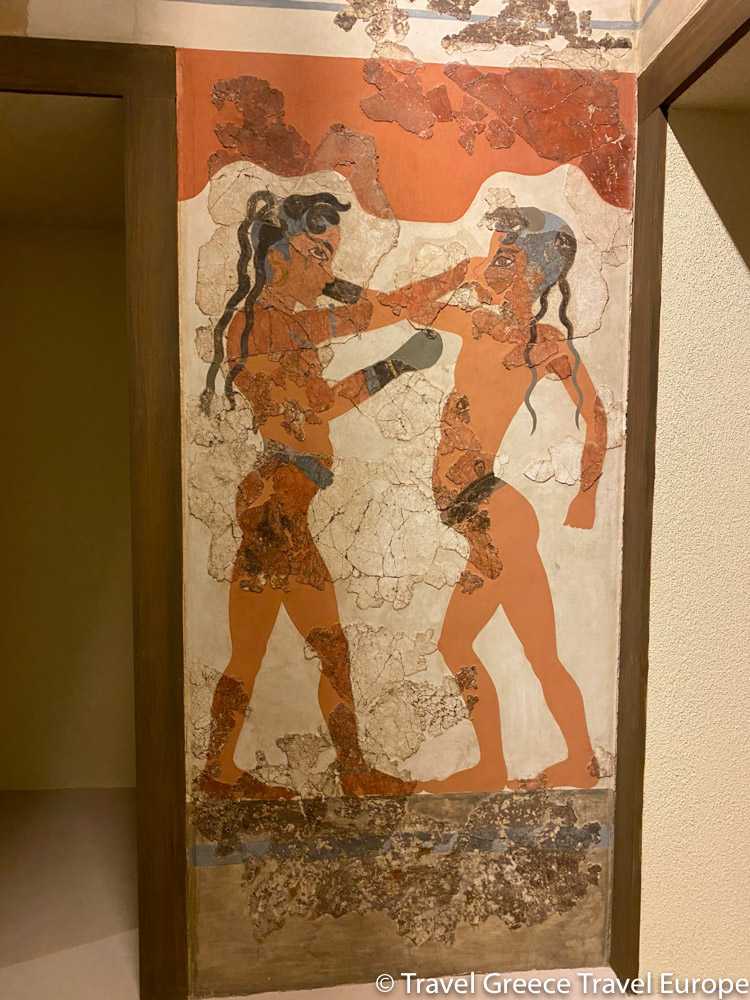 Both frescos displayed at the Collection of Antiquities of Thera, Ground Floor Hall 3-6.

15161 Bronze statue of Zeus or Poseidon, it was found at the bottom of the sea of Cape Artemision in north Euboea. The god is holding a thunderbolt or trident in his right hand. A fine example of the Severe style known for the excellent rendering of motion and body anatomy. 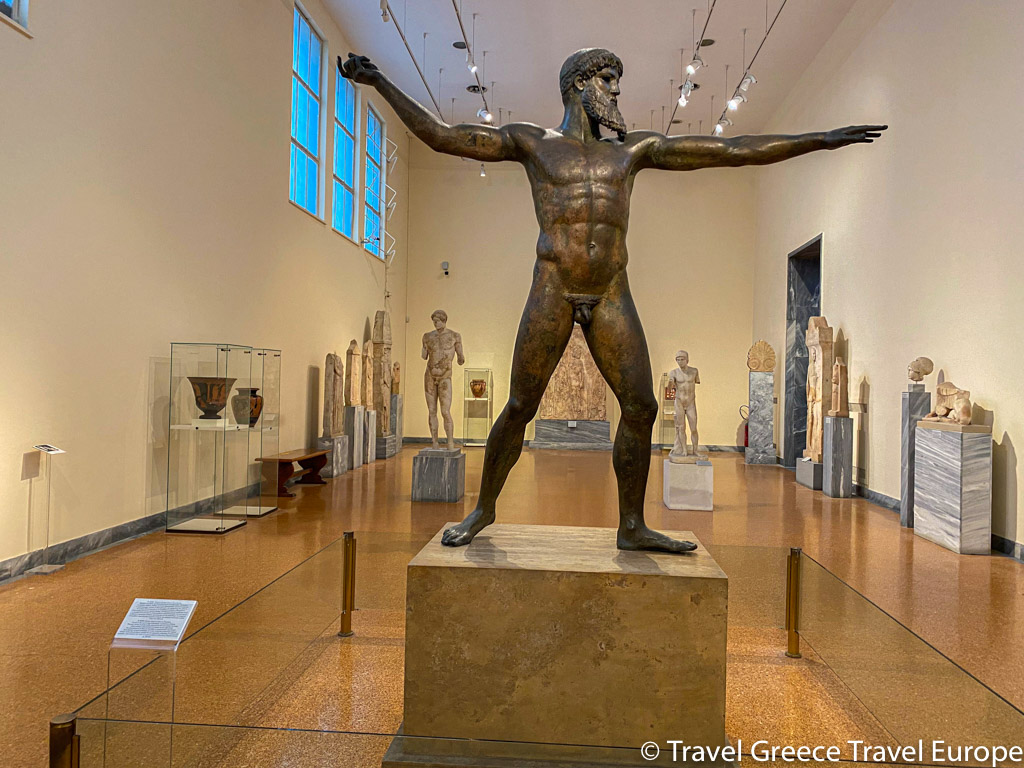 15177 Bronze statue of a horse and a young jockey, it was retrieved in pieces from a shipwreck off Cape Artemision in north Euboea. The work is known as the Artemision Jockey. 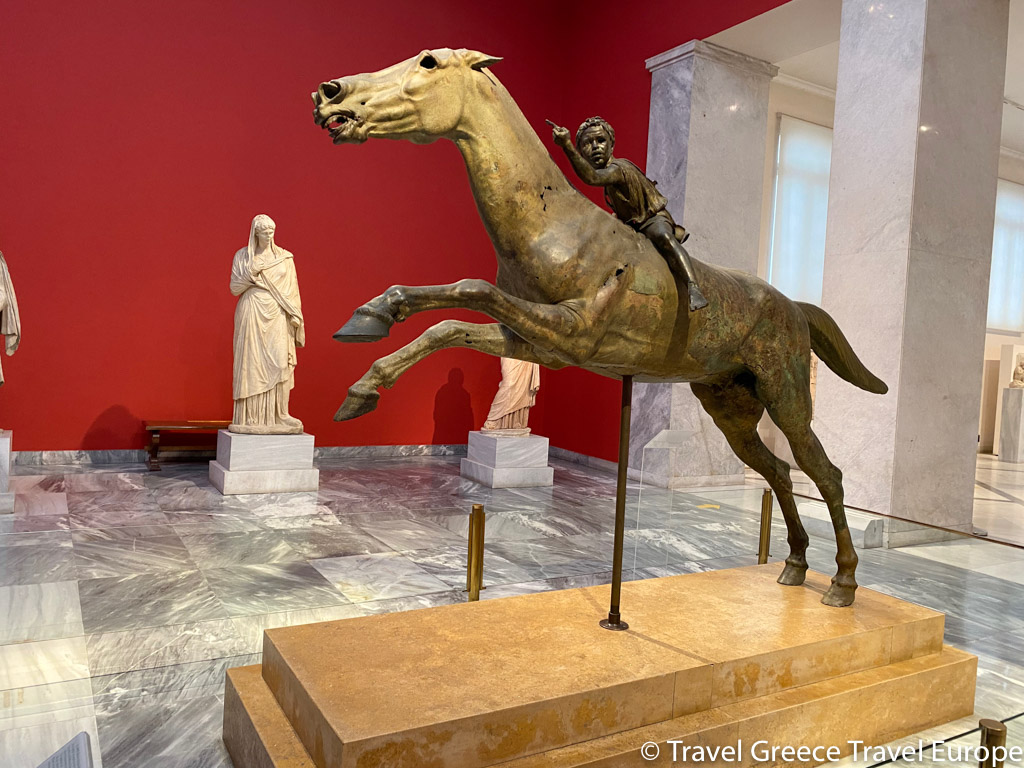 Marble group of Aphrodite, Pan and Eros, made of Parian marble was discovered in the “House of the Poseidoniastai of Beryttos” (Beirut) at the ancient site of Delos. In the sculpture the nude goddess Aphrodite is trying to defend herself from the goat-footed god Pan, while god Eros has come to her rescue. (Hellenistic Period, Ground Floor,  Hall 7-35) 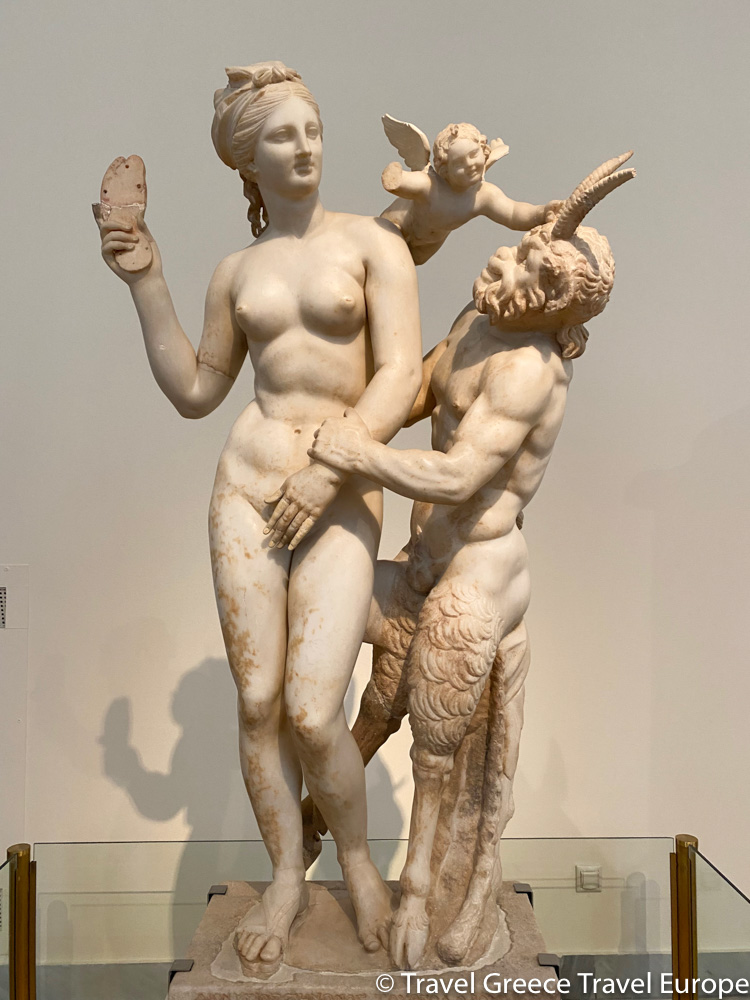 Bronze statue of the emperor Augustus (27 BC – AD 14) depicted in maturing age, was found in the Aegean sea between the islands of Euboea and Agios Efstratios. (Roman Period, Ground Floor,  Hall 7-35) 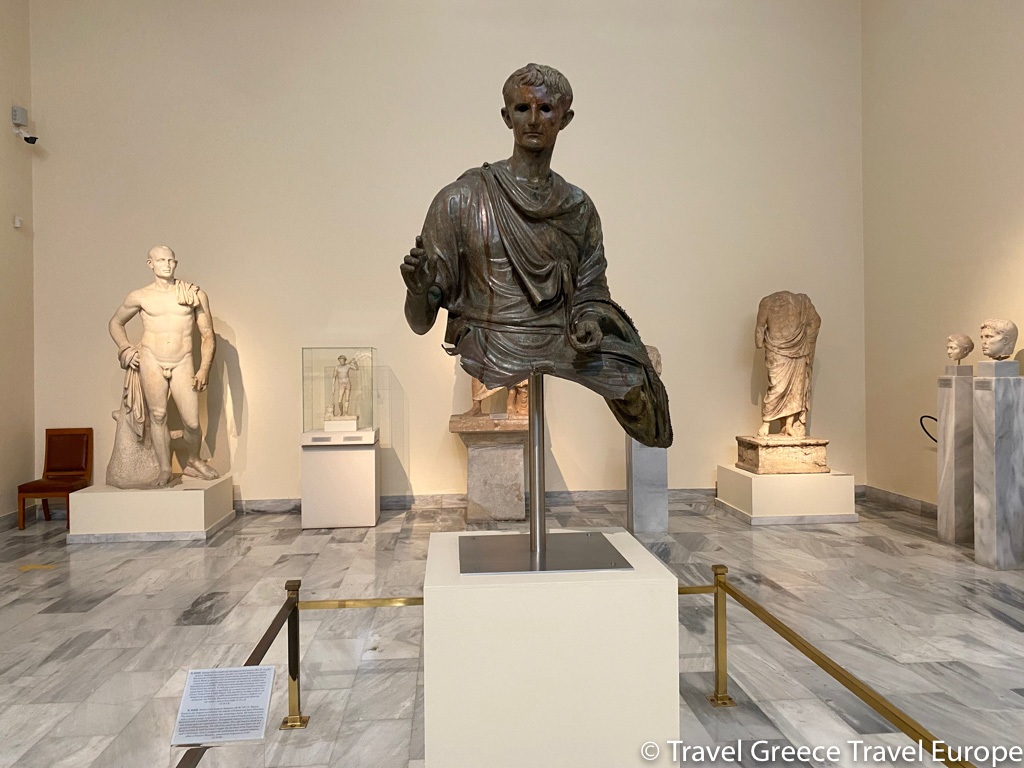 Bronze statue of the emperor Augustus

The Antikythera Mechanism is among the remarkable findings of the Antikythera shipwreck. The 82 fragments of the Mechanism are housed in the Bronze collection of the National Archaeological Museum. More than a century of research has confirmed that it is the oldest known astronomical and calendrical calculating machine. It has been named the “World’s First Computer”. 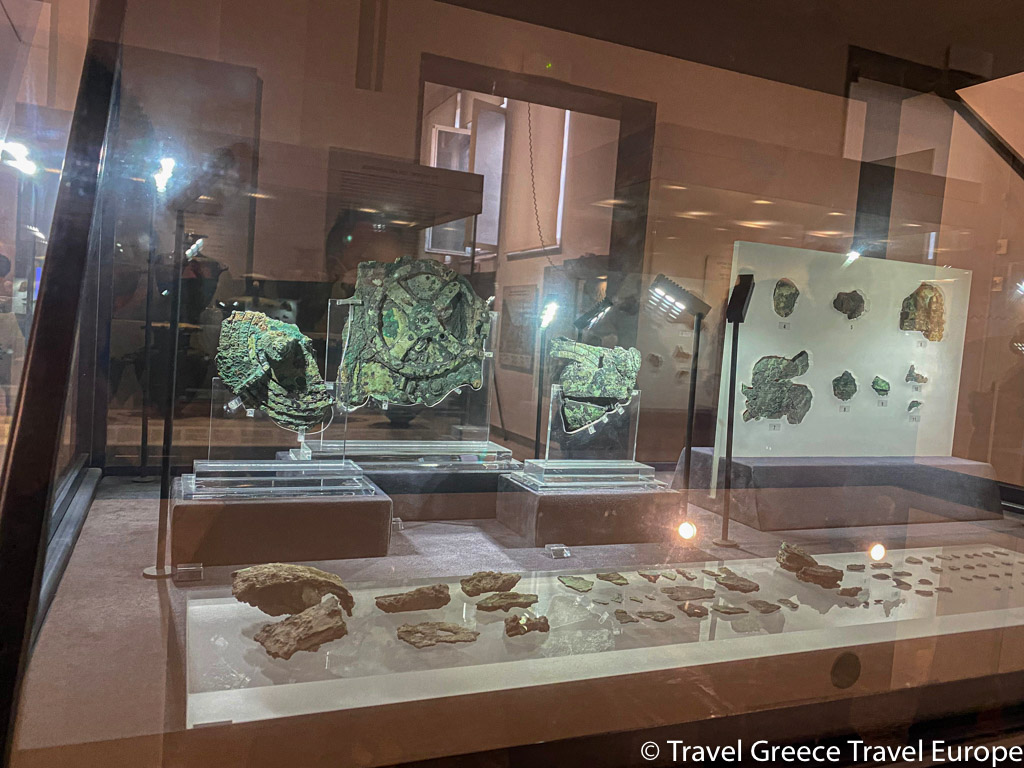 The National Archaeological Museum is closed on 25 – 26 December, 1 January, 25 March, Orthodox Easter Sunday and 1 May.

Best Things to do in Monemvasia, Greece