The Best Day Trips from Athens

Greek history spans over centuries as findings of excavations show that the first settlement in Ancient Greece dates from the Palaeolithic era (11,000-3,000 BC). In the 8th century BC, the civilization of Ancient Greece appeared in the light of world history. Throughout the ages, the Greeks have been building and leaving history behind them in the form of impressive archaeological sites, among others.

Greece has innumerous tourist attractions and a significant amount of historical sightseeings that would take a lifetime to visit all. The good news is that Greece is a relatively small country, which allows its visitors to roam easily and quickly from the capital city of Athens to some of the most important attractions which are geographically near, or not.

We have created a list with the top 10 best day trips from Athens for those seeking to expand their adventure a little further. 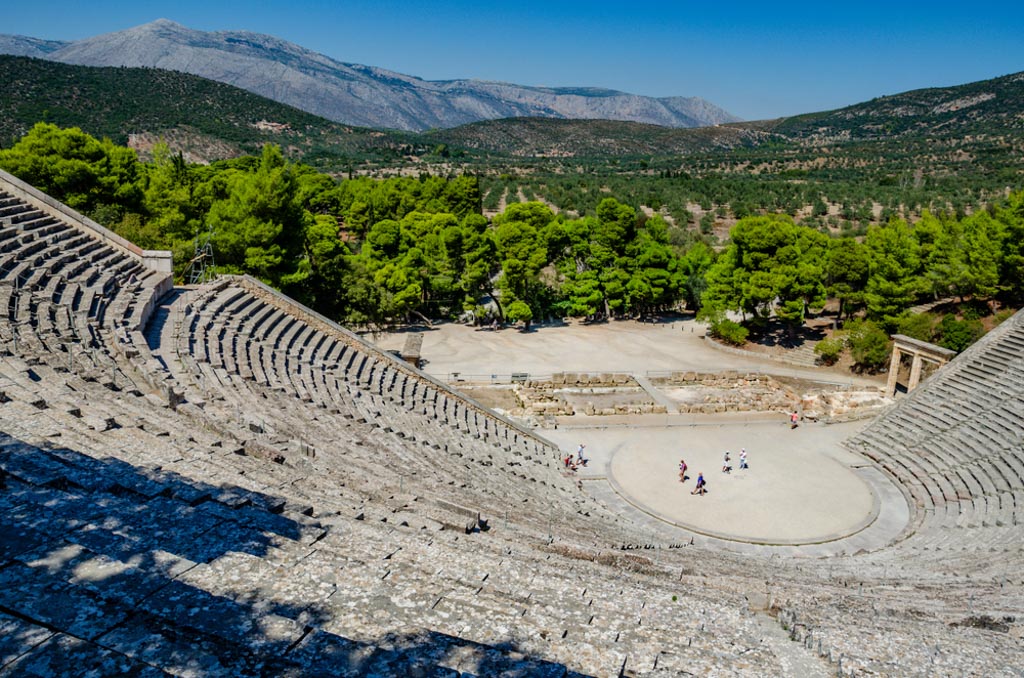 Located on the northeastern side of the Peloponnese, in the regional unit of Argolis or Argolida, Epidaurus is one of a kind archeological site. Epidaurus is mostly famous today for its ancient theater that hosts concerts and music festivals until today during the summer. The theater was constructed in the 4th century BC in honor of the Olympian God of Medicine Asclepius, whose healing sanctuary was located nearby.  The remains of the place considered to be the birthplace of modern medicine can be visited by visitors and there is also a small museum in the area which exhibits the findings from excavations made in the area.

Many daily tours depart from Athens to Epidaurus daily. We suggest the following tours:

Day Tour to Mycenae and Epidaurus with Lunch

2. The Archeological site of Mycenae 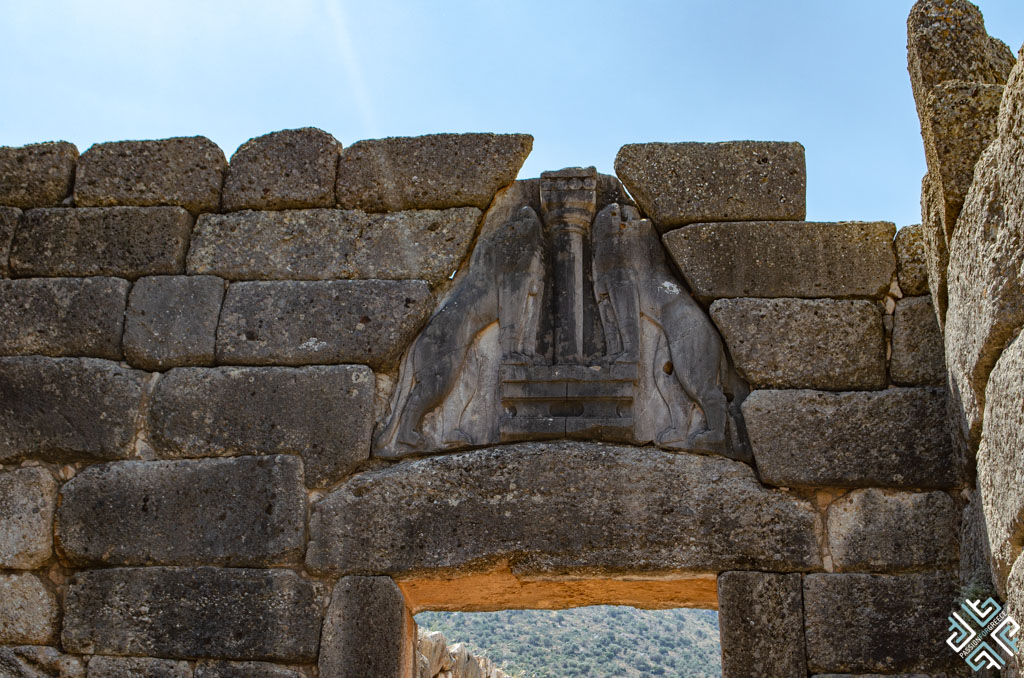 Another famous archeological site in Peloponnese with great significance to the Greek Ancient world is Mycenae. This town was home to one of the most significant prehistoric Greek civilizations, the Mycenaean civilization that flourished from about 1600 to 1000 BC. The powerful kingdom was founded by the legendary king Agamemnon, son of Atreus, who led the Greeks in the Trojan War according to the writings of Homer. The ancient town was surrounded by enormous walls, ruins of which have been well preserved until today. The most impressive foundation of the city, still standing today, is the Lion Gate, the symbol of the Mycenaean power, and the Treasury of Atreus, which mythology has that it was built by Cyclops. The site also has a museum that displays incredible findings from excavations made in the area, such as the gold death masks of Mycenaean kings and other gold and bronze objects found in tombs of kings and nobles.

3. Delphi- The Center of the Greek Ancient World 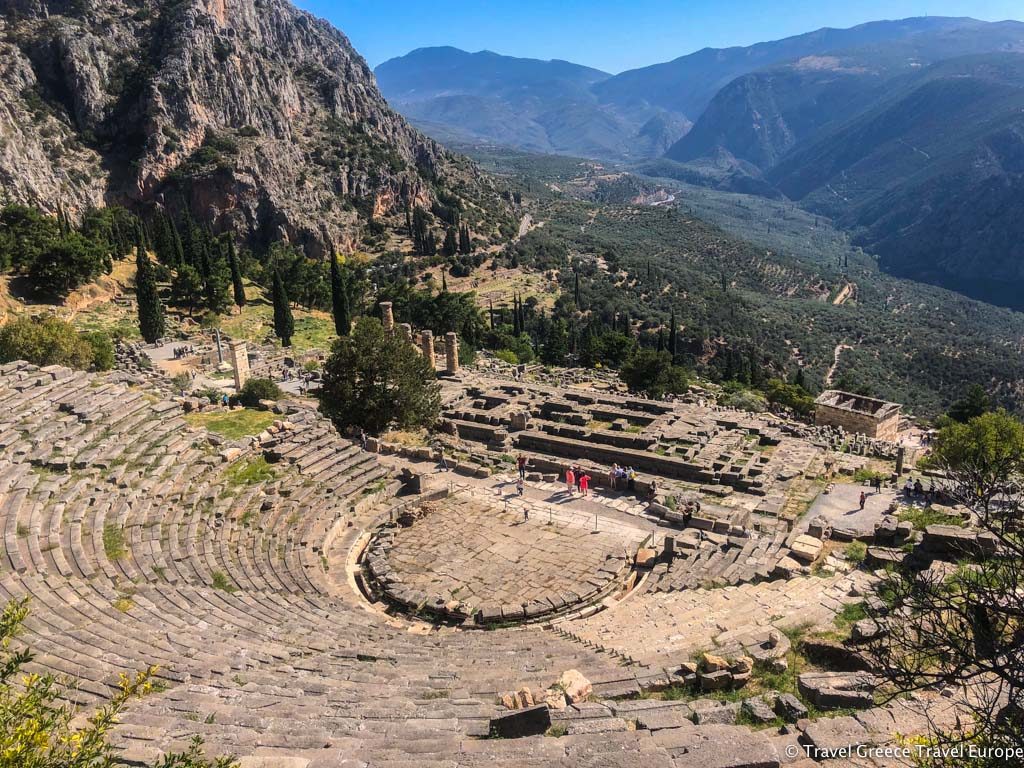 Nestled between two towering rocks of Mount Parnassos high above the Gulf of Corinth, lies the archeological site of Delphi. In Ancient Greece, Delphi was a sacred precinct as there lied the Pan-Hellenic sanctuary of Apollo, the Olympian God of Light. It was in this temple where according to Greek Mythology, the “Pythia” served as the major oracle, consulting people about important decisions throughout the ancient Greek world. Delphi was also the site of the “omphalos”, the “navel of the world”, thrown by god Zeus, which marked the center of the world to the Ancient Greeks. Today Delphi is listed as an UNESCO World Heritage Site.
The archeological site is located 180 kilometers northwest of Athens. Visitors can visit Delphi from Athens by a regular bus service (KTEL) departing from the center or alternatively they can join a full-day tour to Delphi from Athens by booking a tour operator package. Check the links below.

4. Arachova- A cosmopolitan village in the Greek Mountains 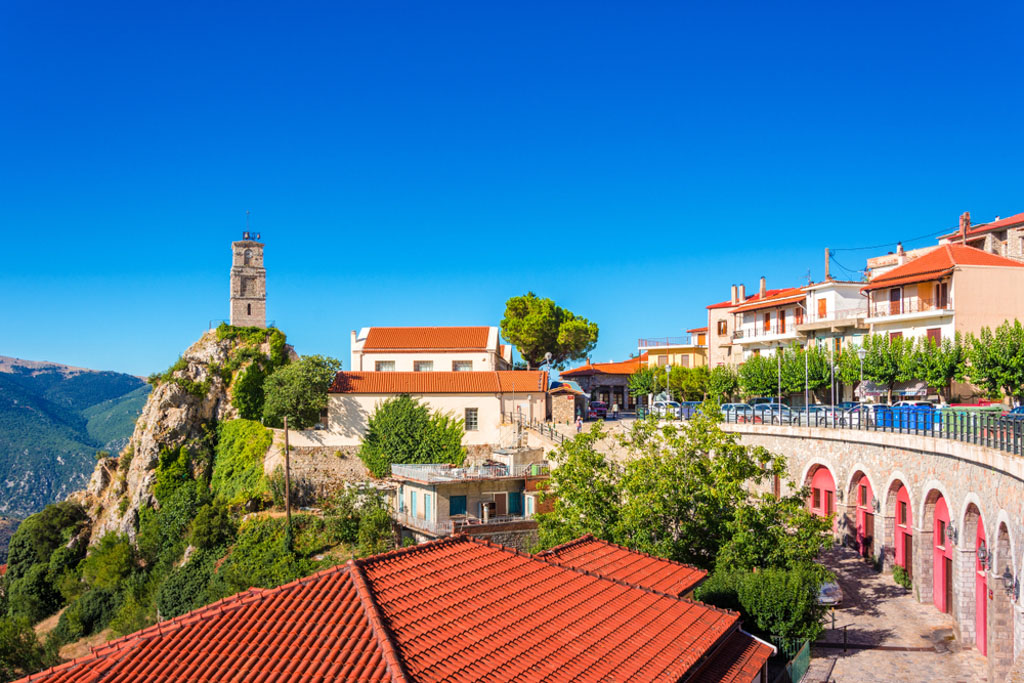 Another exciting day trip from Athens is the mountainous cosmopolitan village of Arachova, located at a short distance from the archeological site of Delphi. Greek people call Arachova the “winter Mykonos” as it attracts a lot of famous and rich people during the winter. The picturesque village located in the Mt of Parnassos is a perfect day-trip destination as it is only an hour and a half drive from Athens. The village is packed with traditional Greek taverns, but also elegant restaurants, cozy cafes and atmospheric bars, boutiques for shopping lovers, and shops with traditional goods from the area. The Mt Parnassos Ski Center is also very close to the village, which is worth visiting either you want to practice your ski moves or just to have some fun in the snow. Although it is an all-year-round destination, it is recommended you visit this village during the colder months, as when the snow decorates the village, Arachova looks like a small town from a fairytale.

5. Nafplio – The first capital of the newly born Greek state 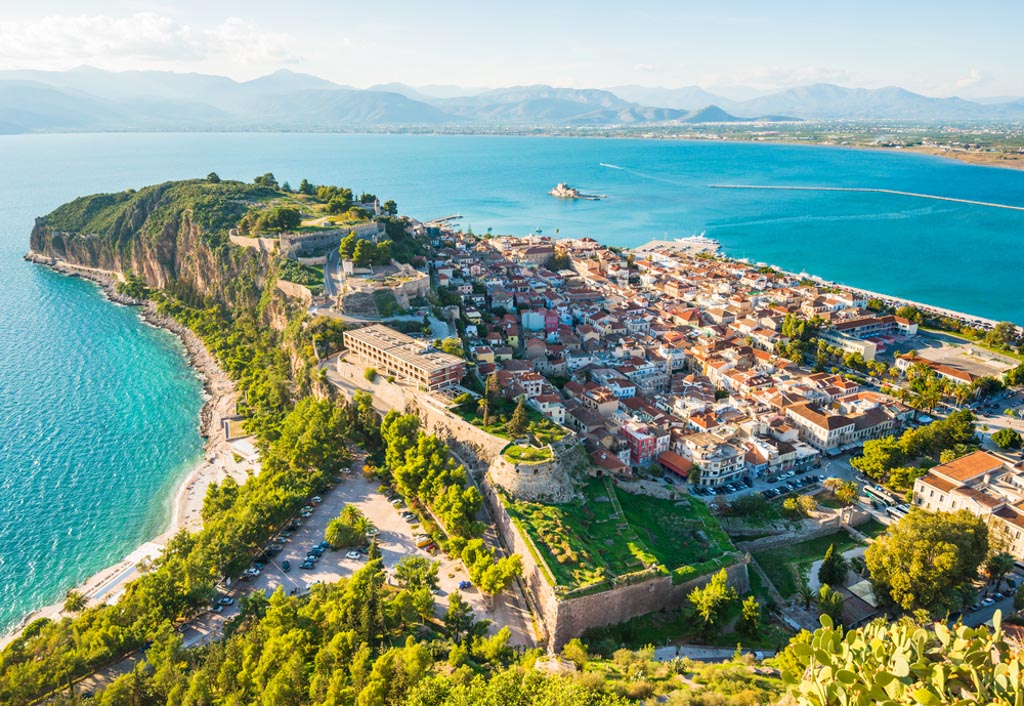 Nafplio is by far one of the most beautiful and romantic towns on Greece’s coast, an easy day trip or weekend getaway from Athens. Nafplio was the very first capital of the newly born Greek state between 1823 and 1834. The town bursts with splendid Venetian and Neoclassical architecture and fortresses, ancient forts, seaside restaurants, picturesque narrow streets, atmospheric cafes and bars. The most famous attraction of the town is the hilltop Palamidi castle, nestled on the crest of a 216-meter high hill which can be reached either by a 999-step climb or by car and the small water castle islet in the harbor, named Bourtzi, which can be either admired by far or visited on a boat tour. 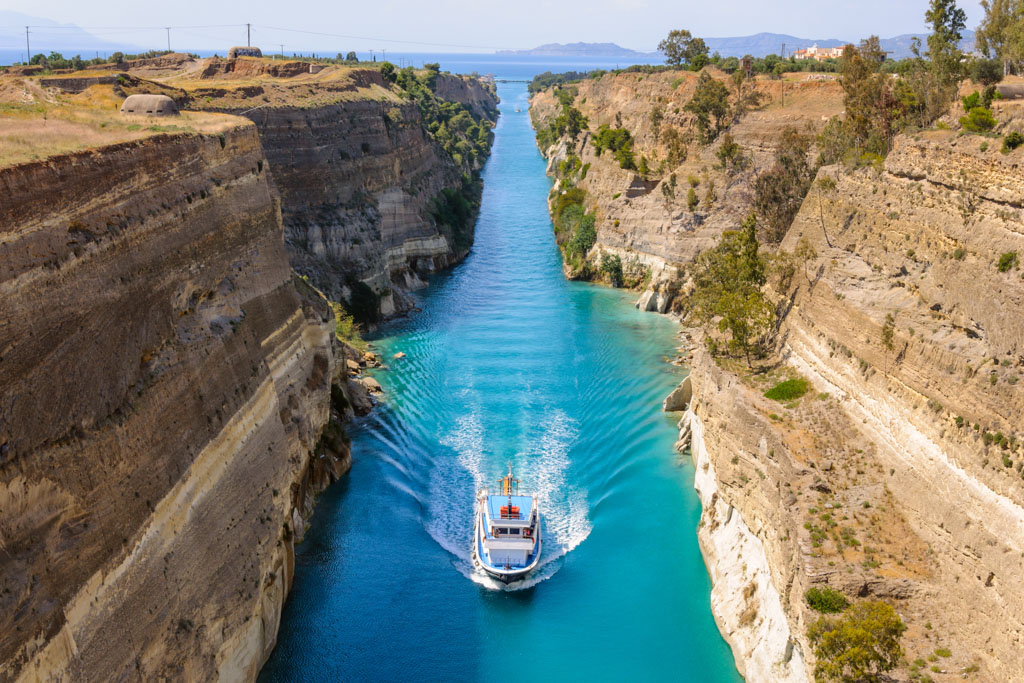 The Isthmus of Corinth is a narrow channel that separated the peninsula of the Peloponnese from the rest of the Greek mainland. On the west of the Isthmus is the Gulf of Corinth and to the east, the Saronic Gulf and is at this very point where the Aegean Sea meets the Ionian Sea.  Channels have been built today to connect these two parts of lands and they have become a famous attraction for tourists, as not only the views are incredible, but also because it has become a spot for high-adrenaline activities, like bungee jumping.

Additionally, there is also a lot of history connected to this place. In ancient times Corinth used to be one of the most powerful and culturally important cities in Greece. The ancient city of Corinth ruins is a very interesting archeological site that attracts hundreds of visitors to visit the notable temple of Apollo from the 6th century or the Ancient Agora. In this very own ancient city is as well where St. Paul lived, preached and wrote the First Epistle to the Corinthians.

A visit to the Isthmus of Corinth can be combined with other attractions as in the tours suggest below: 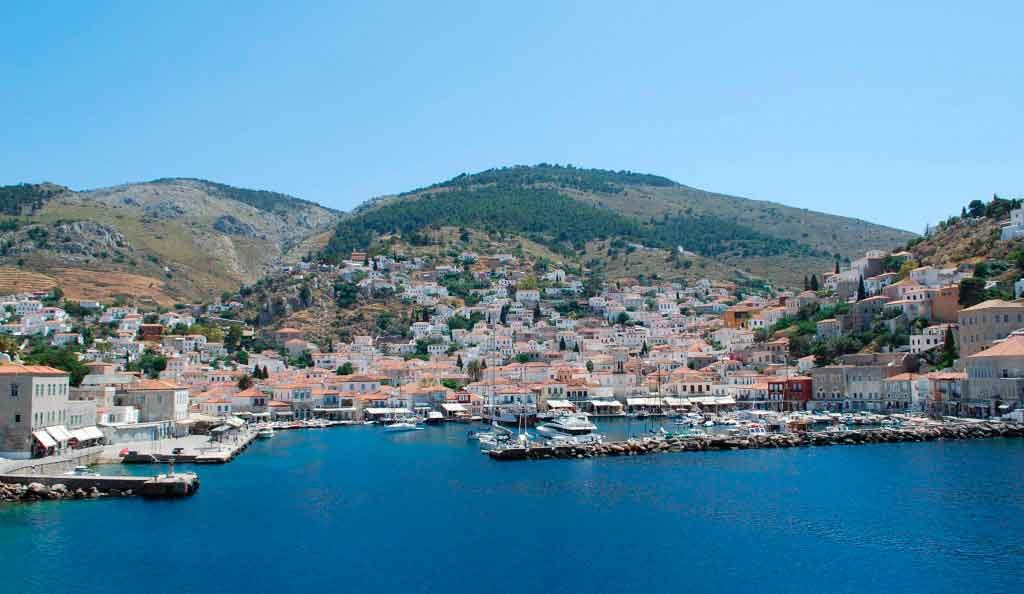 There is no debate that the most famous Greek attraction is to visit one of the hundreds of beautiful islands of this blessed country.  If you are visiting Athens and its surroundings but still want to visit an island don’t worry we got you! In the port of Piraeus, you can find various tour operators that conduct day cruises to the islands of the Saronic Gulf, which are located at a short distance from Athens. The most popular day cruise routes will take you to the beautiful islands of Aegina, Hydra and Poros. What these islands share in common is that they are small, allowing visitors to see enough in a few hours. Explore antiquity temples and ruins in the island of Aegina, stroll around the narrow bloomed streets of Hydra and shop in the colorful markets and save a dive for when you arrive in Poros, which is blessed with Golden Beaches or instead admire the views of this tiny island from the top of the tower clock. The cruise journey itself is amazing. You can gawk at the crystal blue waters of the Aegean Sea while counting the islets you pass by and maybe even be lucky enough to see some dolphins’ parade.

From Athens: Day Cruise of the Saronic Islands

Situated in the northeastern part of the Peloponnese, Nemea is an archeological site of great importance both in ancient and modern Greece. It is here that the Nemean Games were born in 537 BC, attracting visitors from all corners of Greece. According to Greek mythology, ancient Greeks would hold the Nemean Games every two years in honor of the king of the gods – Zeus. 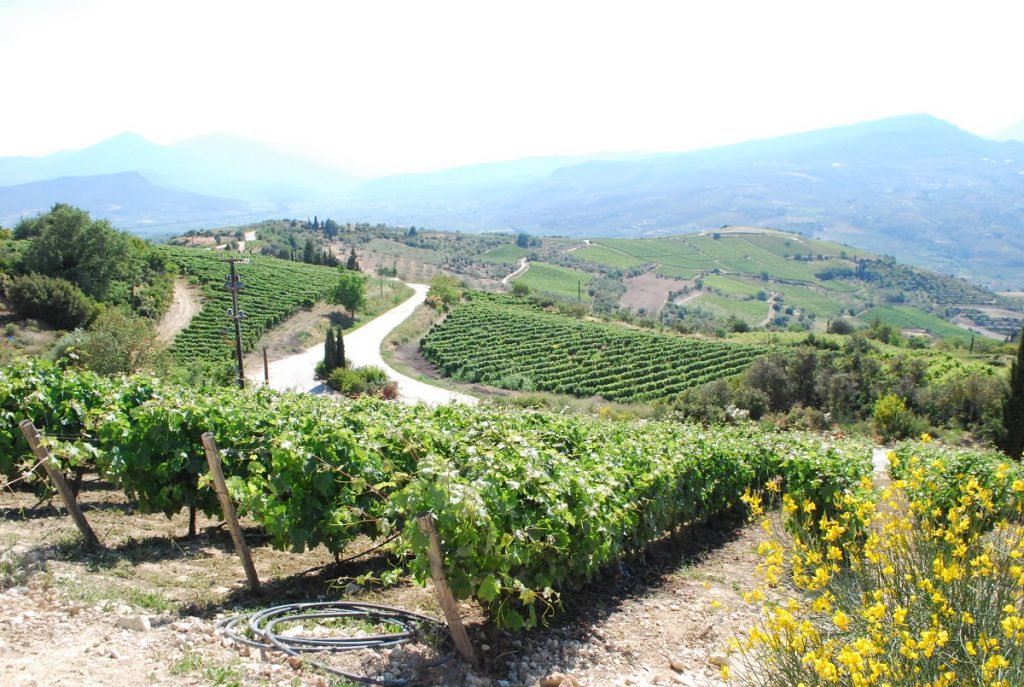 Mythology also claims that in this same site Hercules executed the infamous Nemean Lion. Today Nemea is a compelling winemaking region that attracts tourists for the numerous and famous wine vineyards found in the area. The Nemea land produces a variety of grapes, with the most famous being the red Agiorgitiko. Other grape varieties include Malagousia, Chardonnay, Merlot, Rodites, and Cabernet Sauvignon. The wines produced in the area are famous worldwide. The dozens of vineyards in the area offer wine-tasting and wine-educational seminars to visitors. Some of the most popular vineyards in the area are:

Nemea is worth visiting at any time of the year.  The best way to get to Nemea is by car or a private tour. The trip to Nemea is worth the drive as you will have to pass the Isthmus of Corinth which connects mainland Greece with the Peloponnese peninsula.

Check out these recommended tours:

Situated in Central Greece, at a very close distance from the prefecture of Attica, Evia is an island that exceeds tourists’ expectations about Greek Islands. 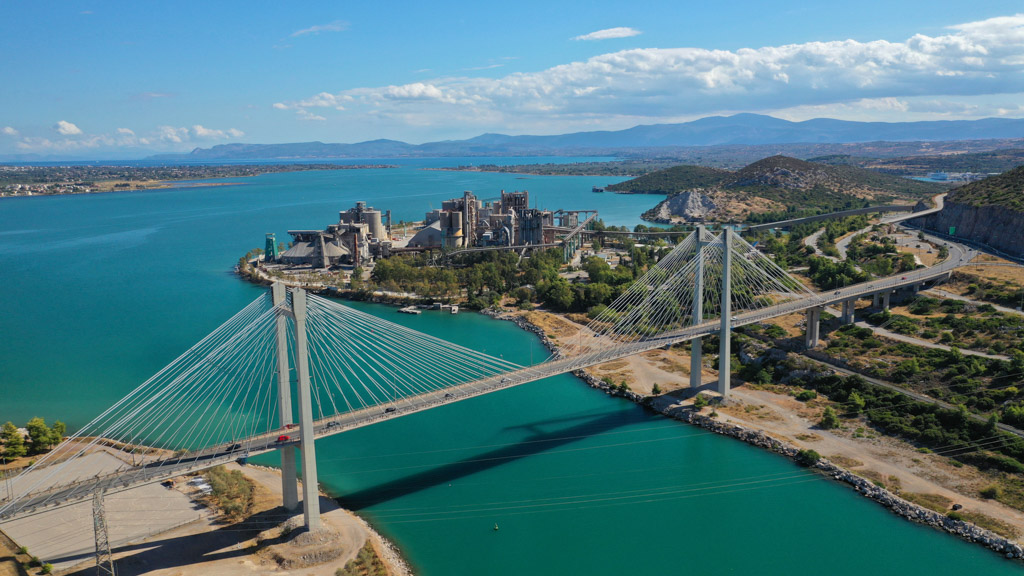 This massive island is blessed by nature: paradisiac beaches, crystal clear waters, thermal sources and spas, vast greenery, ancient cities and ruins. The island’s capital is the seaside town of Halkida, which can be reached by car from Athens, through a large channel that separates the island from the mainland. The town is very popular amongst Athenians for the delicious and fresh seafood restaurants and the countless beautiful beaches, making it the perfect day gateway from the noise and traffic of the capital. On the Southern part of the island, there is another village which is worth taking a day off to visit, especially during summertime! Karystos is a little typical Greek village. The waterfront abounds with ouzeris, seafood taverns and cafés, yachts and fishermen boats are docked in the marina and the friendly local people are hanging around in the squares and cafeterias of the town. In the area around there is an abundance of organized and pristine beaches which can be reached either by car or by a local public bus. To reach Karystos from Athens, you will need to hop on a Ferry from Rafina port to Marmari, from where you can either rent a car or hop on a bus ride heading to Karystos.

10. Day Tour to the Monasteries of Meteora from Athens by train 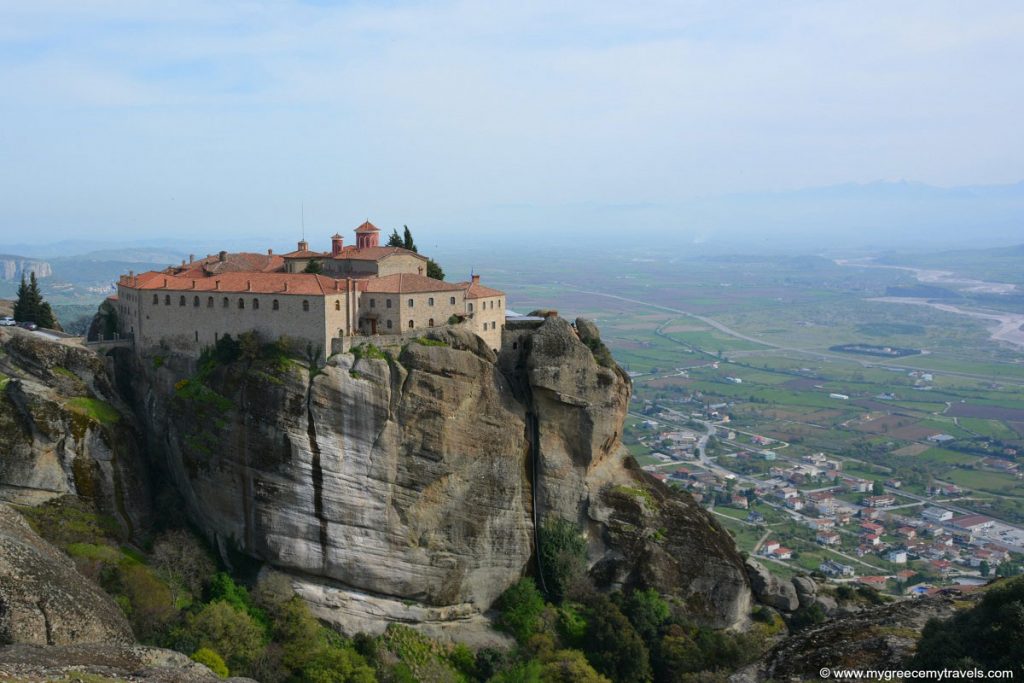 Meteora is an extraordinary combination of giant rock formations with one of the largest and most precipitously built greek Christian Orthodox monasteries and one of the best day trips from Athens. The complex of the monasteries is made up of six monasteries built on immense natural pillars and hill-like rounded boulders which rule the local area scene. Since 1988 the monasteries of Meteora became a member of the UNESCO World Heritage Historic Gems and is one of the must-see attractions in Greece. Traveling from Athens to Meteora thanks to the Modern Metro and Railway System has become easy and quick, allowing tourists to plan a day-visit to this incredible UNESCO World Heritage site of Greece. The train departs from Athens to Meteora from a train station called Larissis or Larissas Athens railway station, every morning at 07:20 am and arrives within 4h20m. The journey itself is worth the trip, as the train passes from beautiful off-road, not touched by humans, parts of Central Greece, rich in greenery and wildlife.

Check out this recommended tour: