Lagoudera Taverna on Kea is the locals’ choice for traditional home cooked Greek dishes. Plus, it has a great story of starry-eyed inspiration behind its name.

What did Sofia Loren have do with a traditional Greek restaurant on Kea?  Well, the story I learned behind Lagoudera Taverna diverted to another Greek island’s restaurant with the same name but comes full circle back to Kea. It was a story that owner Vasillis Boutsikas was happy to tell us over his home cooked Greek dishes he has been serving for twenty years.

Travel by ferry to Kea island, a short one hour ride from the Athenian port of Lavio, took us right to the island’s port called Korissia.  That was where one night we returned to meet Vasilis. There he stood in place as he has over the past two decades welcoming his countless guests.  During my visit, the island’s gastronomy was certainly on the agenda.  Our local tour guide, Yiannis of Keadivers, recommended we try out the dishes that has helped build a solid reputation for Lagoudera Taverna. 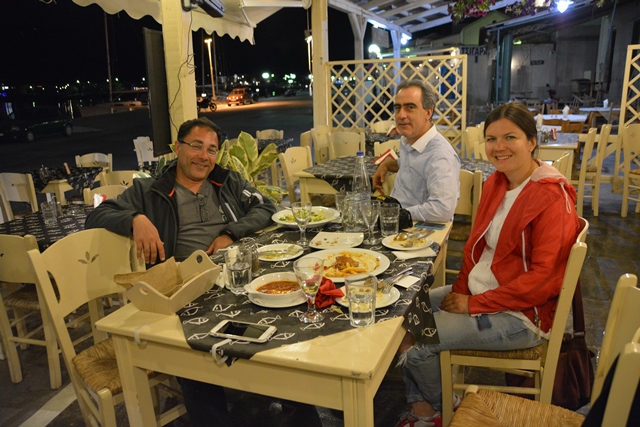 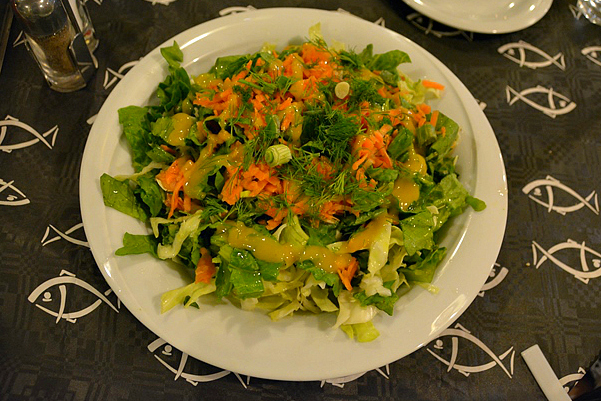 As we started off with the Lagoudera Taverna salad, a tossed green salad complete with fresh greens, local carrots and an olive oil vinaigrette, I asked Vasilis what lagoudera means.  He explained it was the wooden mechanism used on some boats to change direction in the water. Vasilis pointed to one hanging on the wall as décor. However, the story wasn’t over. The word meant more than that. With a smile, in Greek, he told us about a trip he took in his youth with friends to Hydra island. That was where the fabulous and famous Lagoudera restaurant club was making headlines.

“We were young! We didn’t have any money but we wanted to eat at the most cosmopolitan place on the island – so we did somehow,” he laughed as he waved a hand in the air.   “You know Lagoudera was the place to be.”

I didn’t know at all. Turns out, Hydra was a top jet set destination in the 60s and 70s. Hydra’s Lagoudera was the “go-to” island thanks to a 1957 shooting of the Hollywood film Boy on a Dophin starring Sophia Loren. It was the first international movie to be shot in Greece, and after Loren’s visit, other stars followed to become the jetsetters that jet set to Greece including Bridget Bardot, Elizabeth Taylor, John Lennon and Greek movie stars. Apparently, they all used party it up at the legendary Lagoudera. 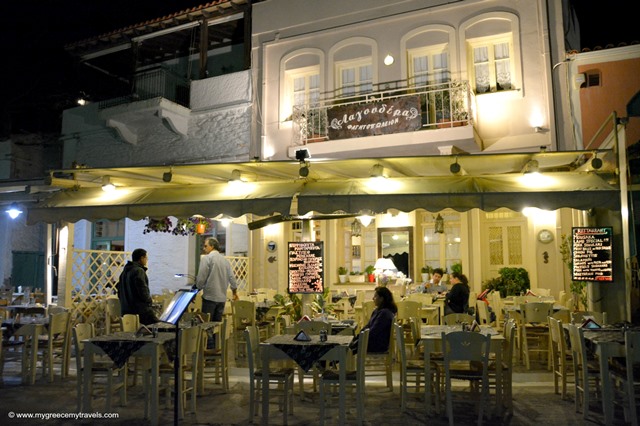 With that youthful memory in mind, Vasilis later named his own restaurant on his island Lagoudera.

Using family recipes handed down from his own family and his wife’s family, they offered a menu of savory Greek magirefta dishes which are slow-cooked or baked and always prepared with olive oil. We tried traditional plates including soutzoukakia a traditional dish from Nea Smyrni – all delicious. The mushroom pie, one of my favorite Greek savory pies, was absolutely lovely and different from other recipes I had tried.  Lagoudera’s was prepared with a white sauce topping. 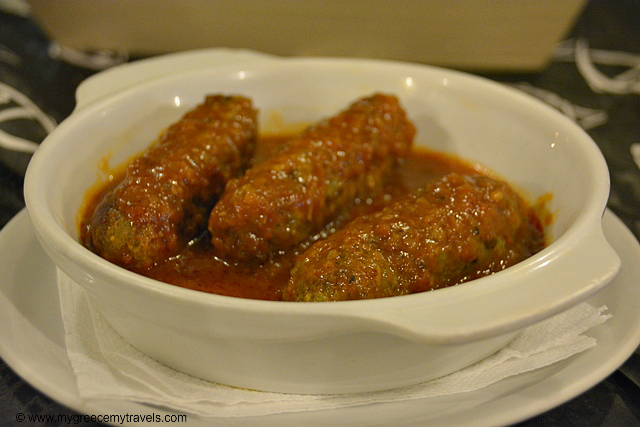 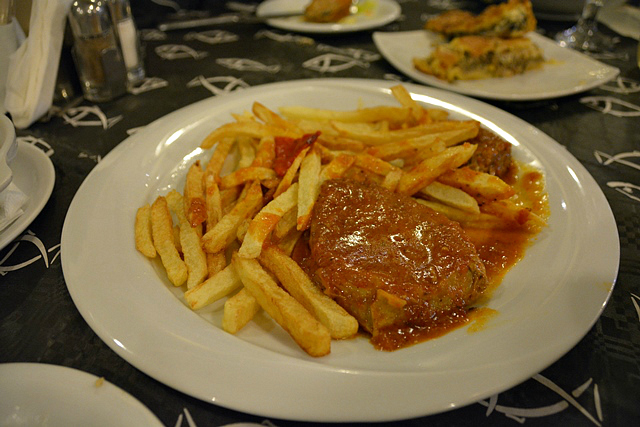 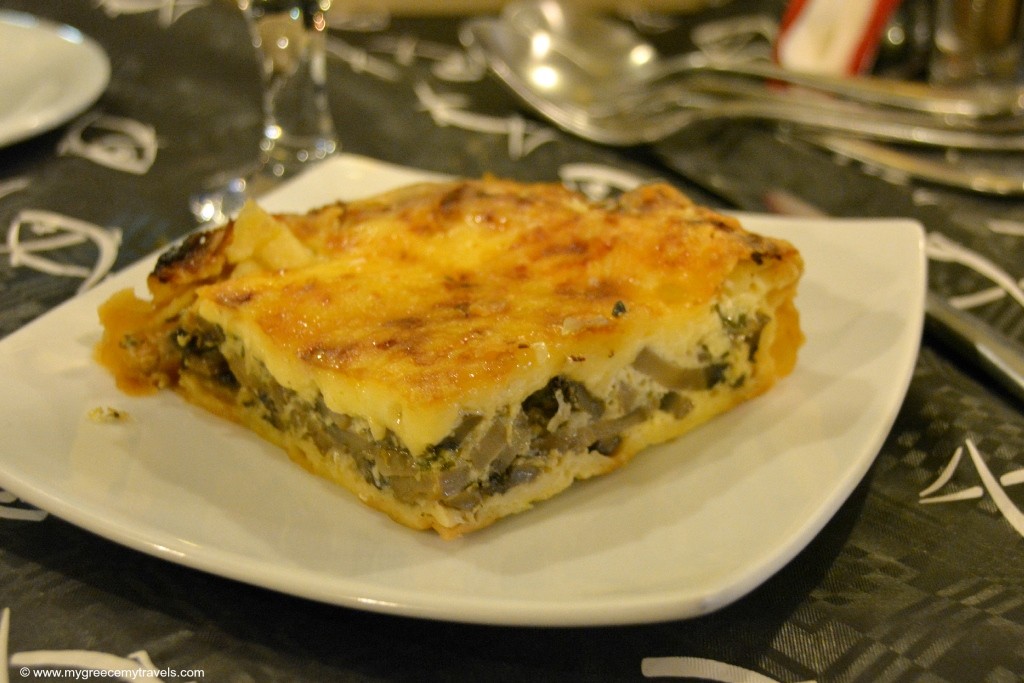 After years of traveling via ferry to the Greek islands, I’ve found the main ports were always a busy hub where passengers load and unload and get their bearings and meet their loved ones or a representative from a local hotel.  On the island of Kea, Korissia port was a destination to head back and dine.

When the crowd had left the harbor and its bobbing yachts and ships and reflection of the moonlight on the water offed a calm setting to enjoy a hearty Greek meal.

Lagoudera Taverna on Kea, situated right on the dock, has it all – a view, great food and something even more – a name backed by a story of great memories possible in the Greek islands. 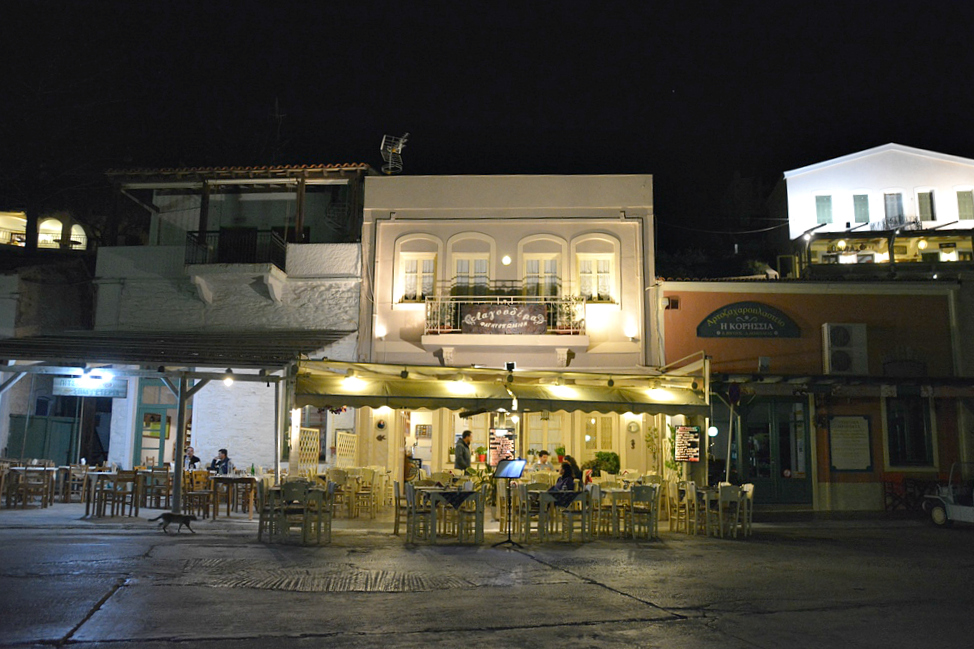 How to get to Kea

Take a ferry from the port of Lavrio.  Tickets start at 11 Euro one way. Check www.openseas.gr for ferry schedules.

Where to Stay in Kea

Check out my review of the Red Tractor Farm here.

What to do in Kea

Kea is a beautiful island with many places to explore including its main town, churches, hiking paths and more. Check out my post: Top Things to Do on Kea Island.

Have you ever eaten a great meal on Kea island?