Chernivtsi along with Lviv is considered the cultural center of Western Ukraine. Because of its beautiful architecture, it is often called ‘Little Vienna’ or ‘Little Paris’. ‘Chernivtsi’ comes from the word ‘chornyi’, which means black. During the middle ages, there was a fortress on the territory of modern Chernivtsi. It was built from the black oak blocks, hence the name. Later, during the twists and turns of history, Chernivtsi was a part of Hungary, Poland, Moldavia, Ottoman Empire, Austro-Hungarian Empire, Romania, Soviet Union and finally Ukraine. All of it turned the face and color palette of the city from black to multicolor.

Chernivtsi got its current old-European style look, while it was a part of the Austro-Hungarian empire. Although the city is not big (a quarter-million people live there), it’s very charismatic and without a doubt, it’s one of the most beautiful cities in Ukraine. Here’s a detailed 2-day itinerary for your stay in Chernivtsi. 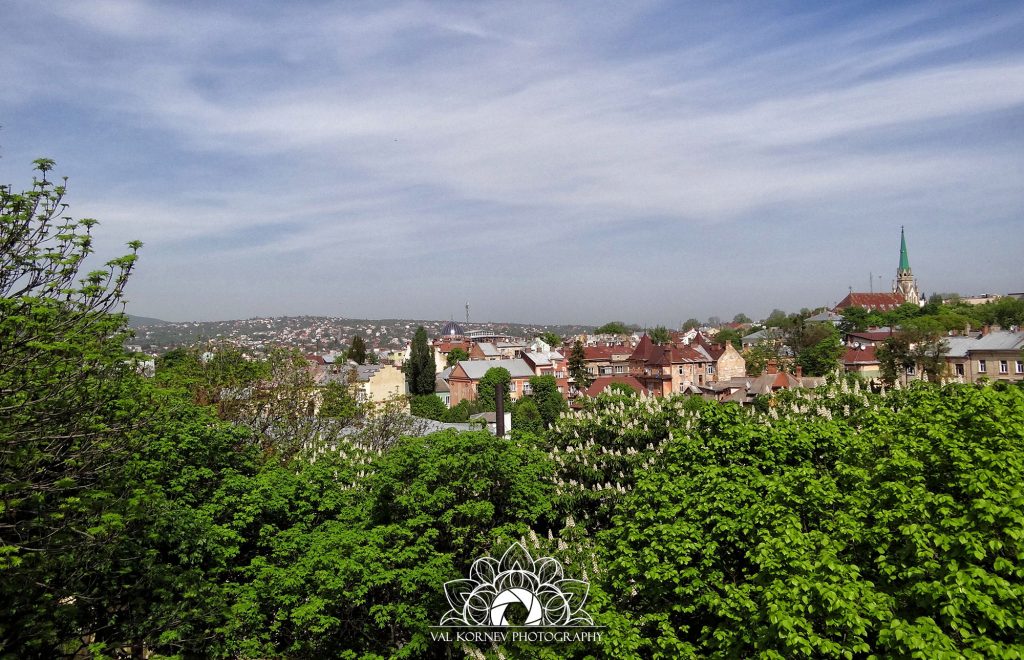 All attractions of the first day are located in a walking distance. 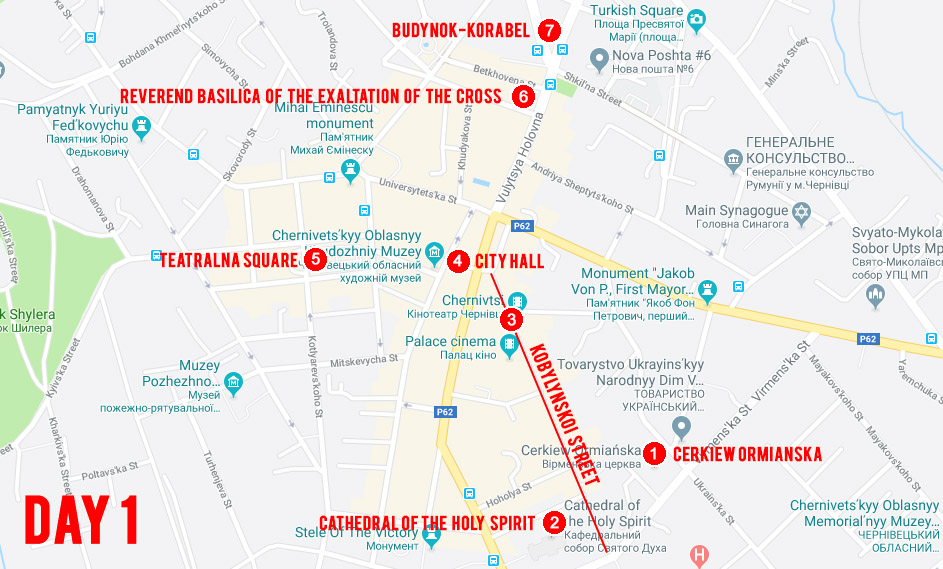 Remarkably, the Austrian King helped to build this church and it has been in his protection for a long time. Today it’s one of the most beautiful churches in Chernivtsi. It unites Armenian, Gothic, Byzantine and Romanesque styles. You can visit it not just to enjoy beautiful architecture, but to listen to the pipe organ and classical music that is being played there quite regularly. 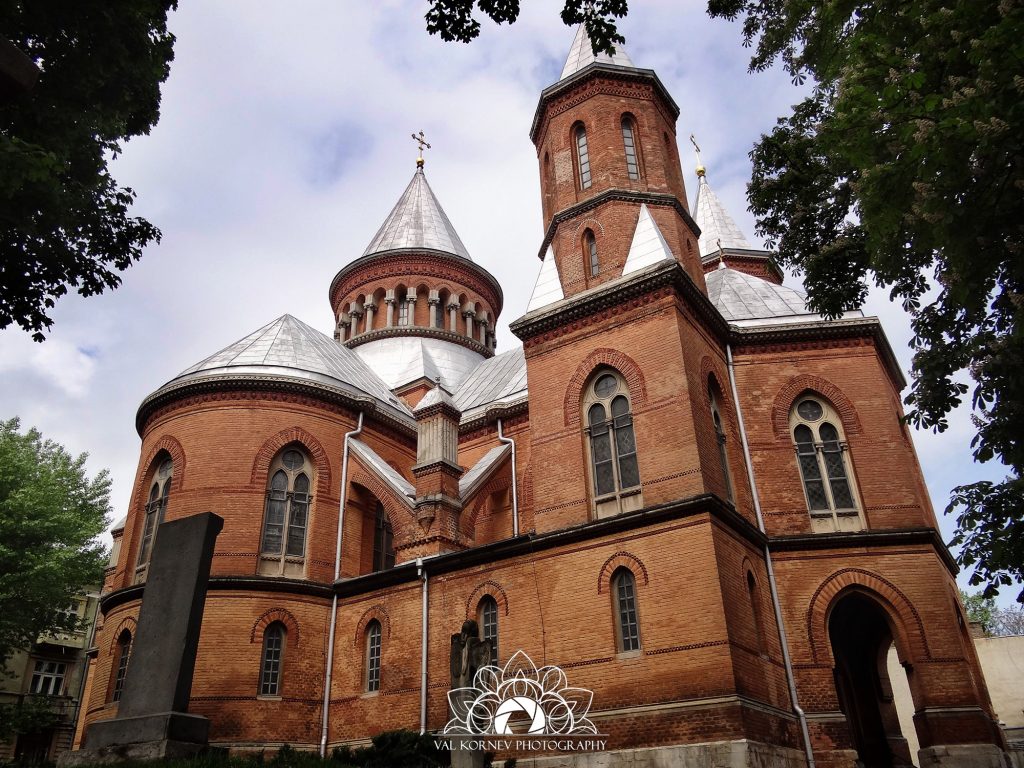 2. Cathedral of the Holy Spirit. This cathedral was also built in the 19th century and it is considered a jewel of the city. Built in neo-renaissance style, it has beautiful wall-paintings made by the Austrian craftsmen and frescos from the 19th century. It’s funny that it had a pink color until it was re-painted in 2017. While it was pink, tourists called it a ‘Barbie church’. The territory around the cathedral is also nice. You can spend 15-30 minutes there before proceeding to Kobylynskoi Street.

3. Kobylynskoi Street. This is the most magnificent street in the city and for this reason, you must visit it more than once. It is said that during the rule of Austro-Hungarian it wasn’t allowed to walk this street wearing dirty shoes and street cleaners used warm water and soap to clean it daily. This street is 700 meters long and every building on it has its own history. People come here to have a walk, drink a cup of coffee and relax after the working day. 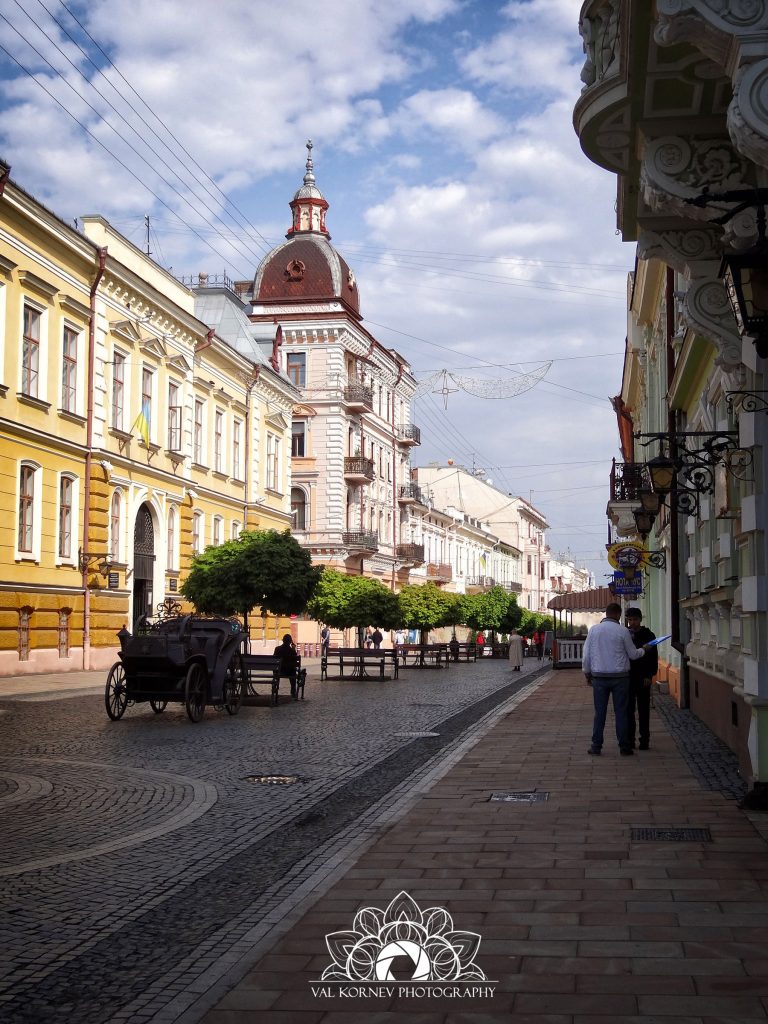 4. City Hall. A bright-blue building with a 50-meter tower that you will see shortly after you finish exploring Kobylyskoi Street is the city hall. Starting from 2004, every noon a trumpeter wearing a national suit climbs the tower to play the unofficial hymn of Chernivtsi. A distinctive trait of the city hall’s tower is two clocks. The clock on the top was installed during construction and the clock above the main entrance was given as a gift from the mayor who governed Chernivtsi from 1866 to 1892.

5. Teatralna Square. The theater in Chernivtsi was brought by the same architectural bureau that created the magnificent theaters in Budapest, Prague, Vienna, and many other European cities. You can still see the city emblem of the Austrian period on the theater’s chimney. The square around the theater is a great place to relax and enjoy the day. There’s also an alley of stars near the theater dedicated to famous Ukrainian artists who were born or started their careers in Chernivtsi. 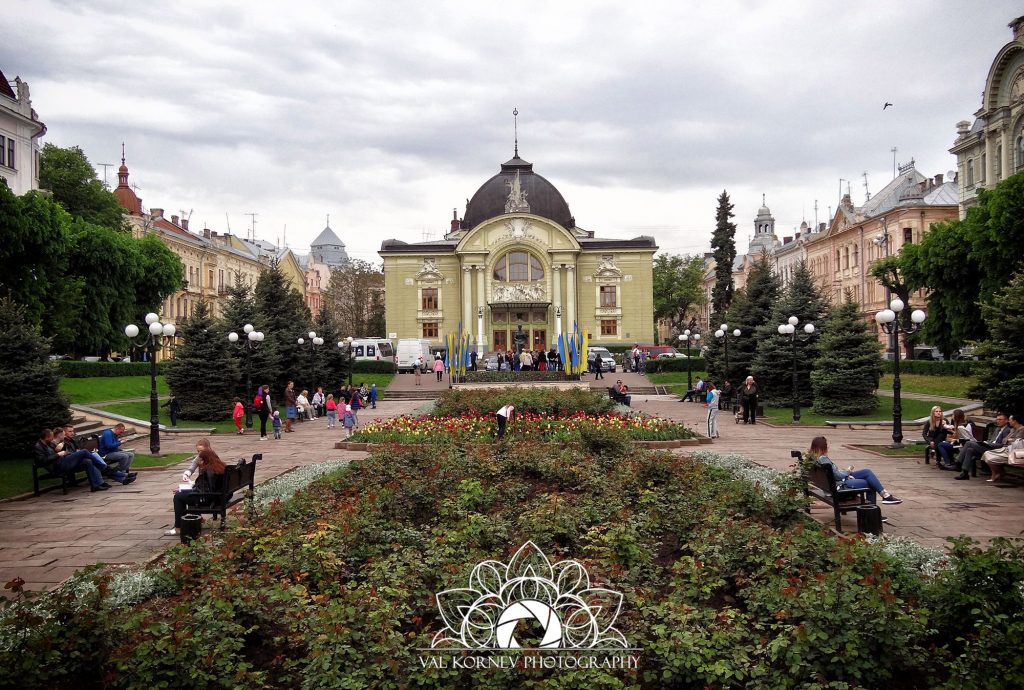 6. Reverend Basilica of the Exaltation of the Cross. A little bit of walking from the theater square and you will get to the Reverend Basilica of the Exaltation of the Cross. It was the first stone building in Chernivtsi which was erected in early 1800s. Initially, Basilica was wooden but following the order Austrian Emperor Joseph II, it was rebuilt. The throne was crafted in the Basilica especially for the Emperor so that he could sit during the church service. In the 1870s, the pipe organ installed in the Basilica received two medals from Vienna and France for being the best sounding pipe organ in Europe.

7. Budynok-Korabel or Ship-House. Not far from the Basilica, you will find a famous ship house that got its name from an unusual form reminiscent of the ship. According to the legend, two brothers lived in Chernivtsi. One of them was a sailor and the other one was an entrepreneur. When the former decided to quit sailing, the entrepreneur invited him to live in the city. To make his brother happy, he built a house in the form of a ship. As a result, there’s a building that looks like it sails the streets of the city. 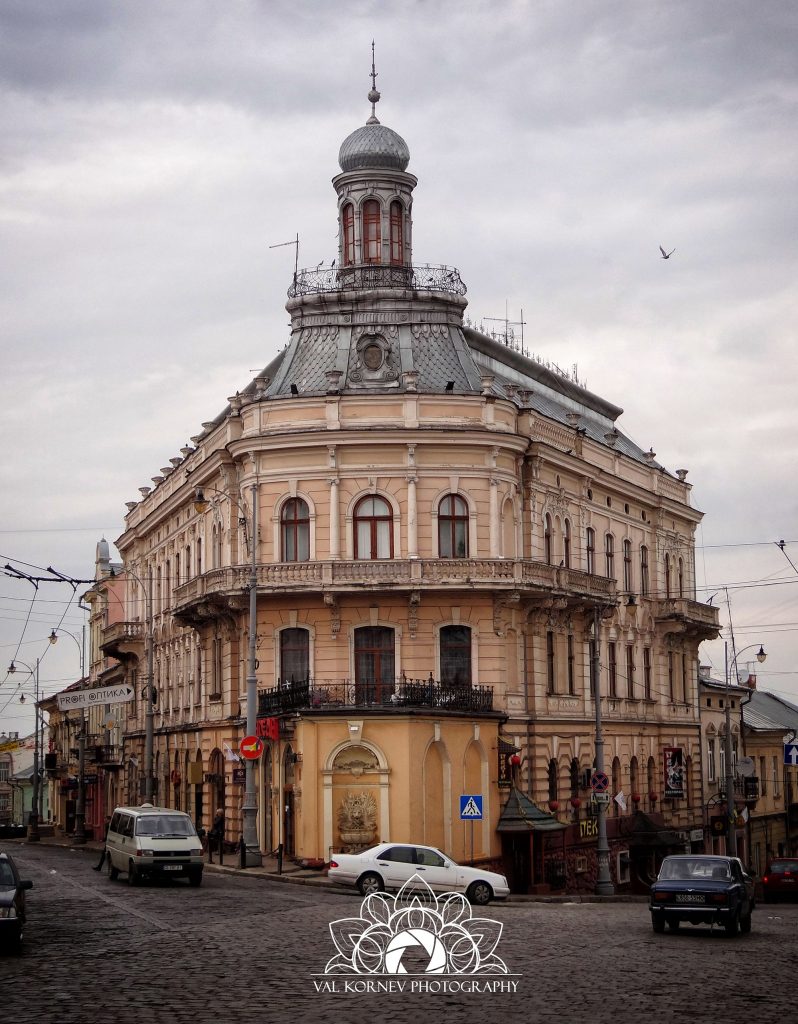 8. Turetska Krynytsya. It’s the oldest water source in the city and it was preserved since the times of the Ottoman Empire. 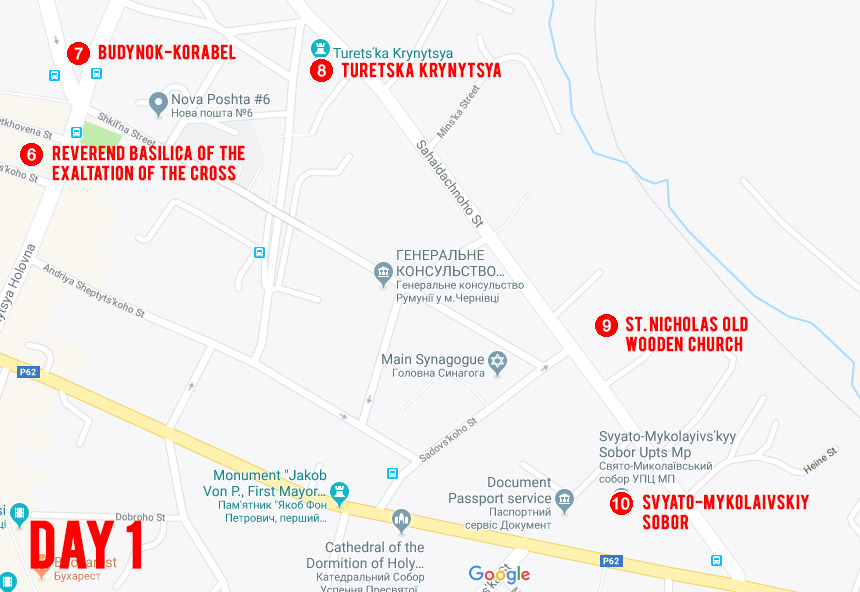 The Turkish Square where you will see Turetska Krynytsa appeared on the maps of the city only in 2008. Its opening was coordinated with the 600 anniversary of Chernivtsi city and now, except for the water source, you can see a flower clock, fountain bowl, delicate summerhouse and an unusual monument to a bicycle.

9. St. Nicholas Old Wooden Church. This is the oldest church in Chernivtsi. It was built in 1607 and now it’s the monument of architecture of national significance. It has no domes and only one level. The reason behind it is that during the Ottoman Empire, it wasn’t allowed to build high churches. It was rebuilt and reconstructed three times.

10. Svyato-Mykolaivskiy Sobor. The last attraction of the first day is Svyato-Mykolaivskiy Sobor. It’s improbable that you can find another orthodox church similar to this one in Ukraine. Why? Because the towers of this cathedral were curved in such an unusual way that it was called a ‘drunken church’. When you look at it, it looks like an optical illusion. The church is built in the Romanian neo-Romanesque style. This is the only orthodox church of Chernivtsi, where sermons weren’t interrupted by the Soviet rule. 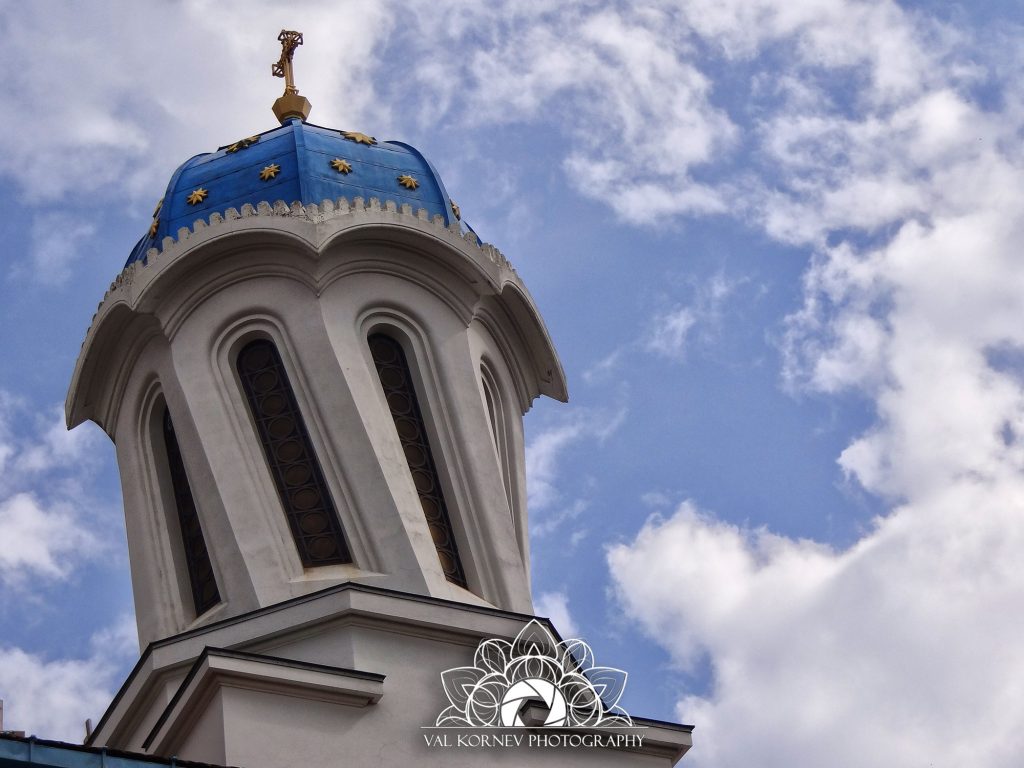 The first day was more about walking and absorbing, and the second day will be about driving and recreation. There are only four attractions and plenty of time to explore them.

1. The Regional Museum of Folk Architecture and Life. This museum was opened in 1986 and now it features 35 memorabilia dedicated to the local culture of the past. You can find mansions as well as houses of common people there. The houses are divided by five regions of Ukraine from which the architectural memorabilia originated. 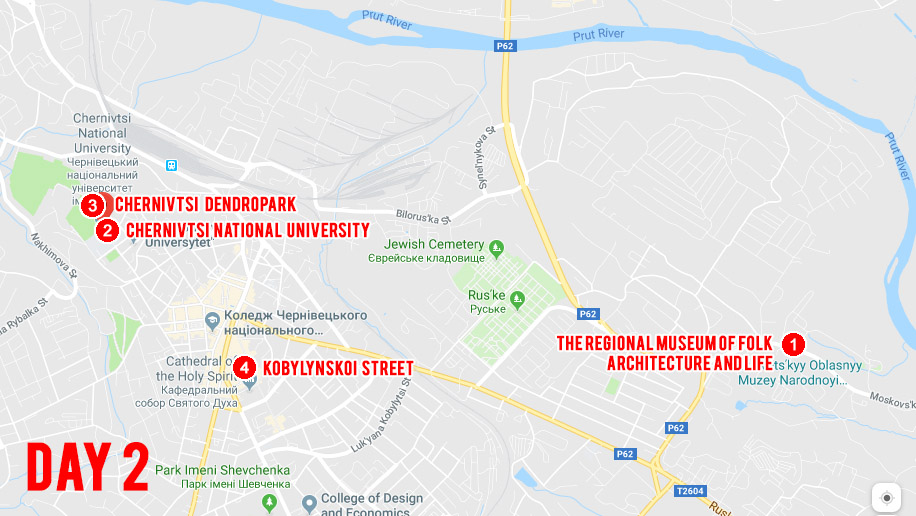 You can explore different household items from the old times, including clothes, jewelry, wooden and leather products, etc. You can also take an excursion, participate in a workshop or see a theatrical play. Clean air, beautiful nature and ethnic flavor will make your visit unforgettable.

2. Chernivtsi National University. Did you know that Hogwarts is located in Chernivtsi? What once was a residence of the local metropolitan became a University in the 19th century. It was under construction for 18 years and the result was quite eclectic. 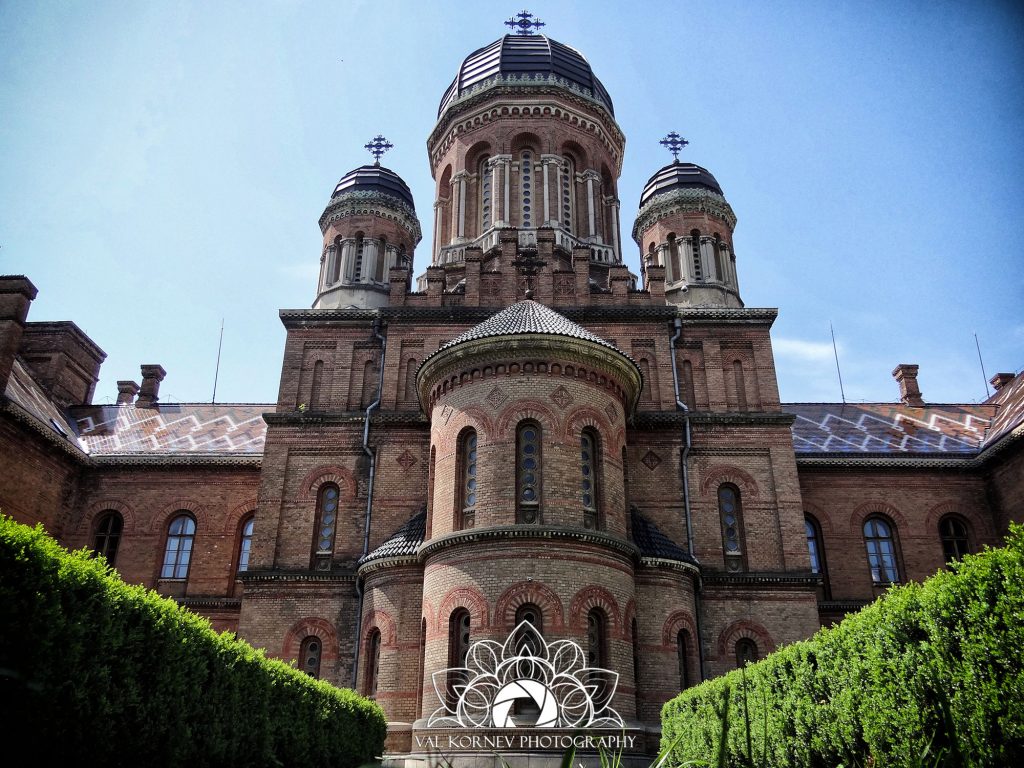 There are three monumental buildings – the main building in the center (make sure to see the Red Hall inside this building), an academic building on the left side (a former church) and a building that was once a presbytery on the right side. The university received many awards on architectural competitions and was included in the list of UNESCO Heritage Sites in 2011. Just imagine, how it is to study there. 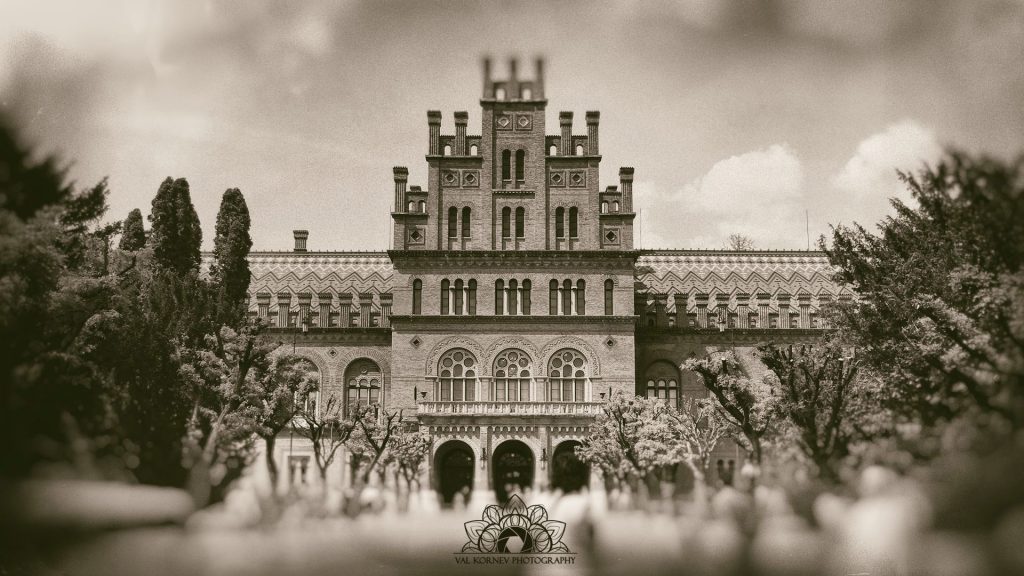 3. Chernivtsi Dendropark. When you finish exploring the university, go to the Dendropark located on the backside of the university’s main building. It’s not large, but very cozy and lovely park where you can take your time to relax. Along with exotic trees, the park has maples, oaks, linden trees, hornbeams, weeping willows, magnolias and candle trees. This wall of trees ensures that the tranquil atmosphere of the park remains untouched.

After the two days in this city, Chernivtsi is bound to leave a trace in your heart and take a special place in your memories.

The Best Things To Do In Nørrebro

15 Best Things To Do In Kreuzberg