Night at the Opera: Odeon of Herodus Atticus

A night enjoying the performing arts under stars – just as the ancient Greeks once did – is possible at the Odeon of Herodus Atticus in Athens. It is a unique experience to plan for when you travel to Greece.

If you love the operas, concerts and theater, and you are traveling to Athens during the summer season, be sure to check the schedule of performances at the Odeon of Herodus Atticus.

Also known as the Herodion, the ancient amphitheater is still in use, functioning as it did nearly 2,000 years ago. You’ll be literally sitting in ancient history as you enjoy some of the best performances in the country or enjoying the talents of some of the best international artists that happen to be on tour in Greece. 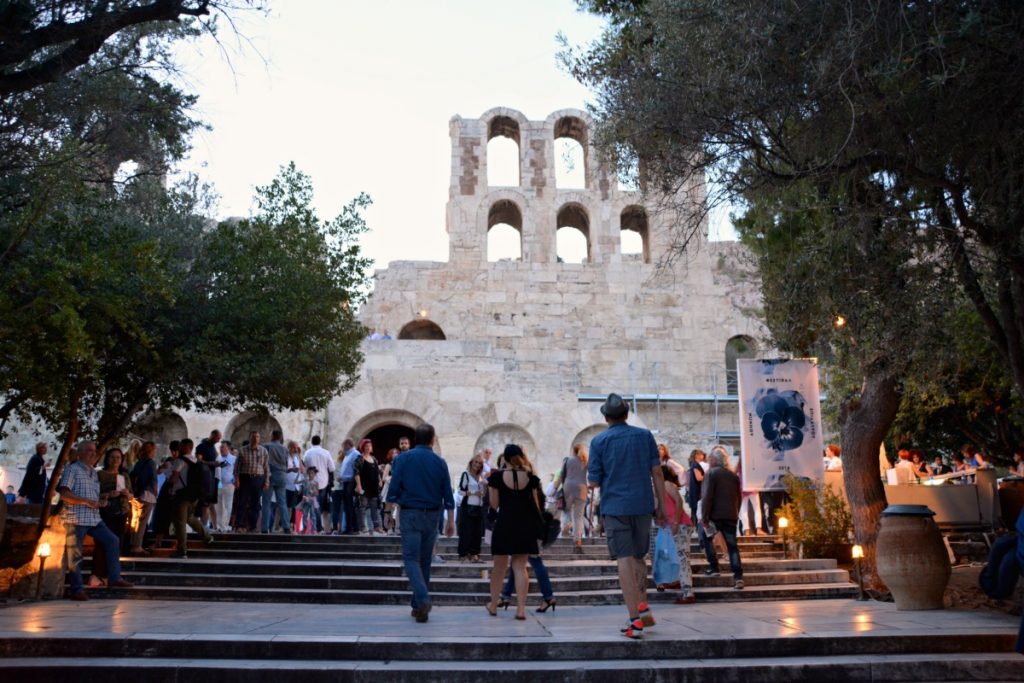 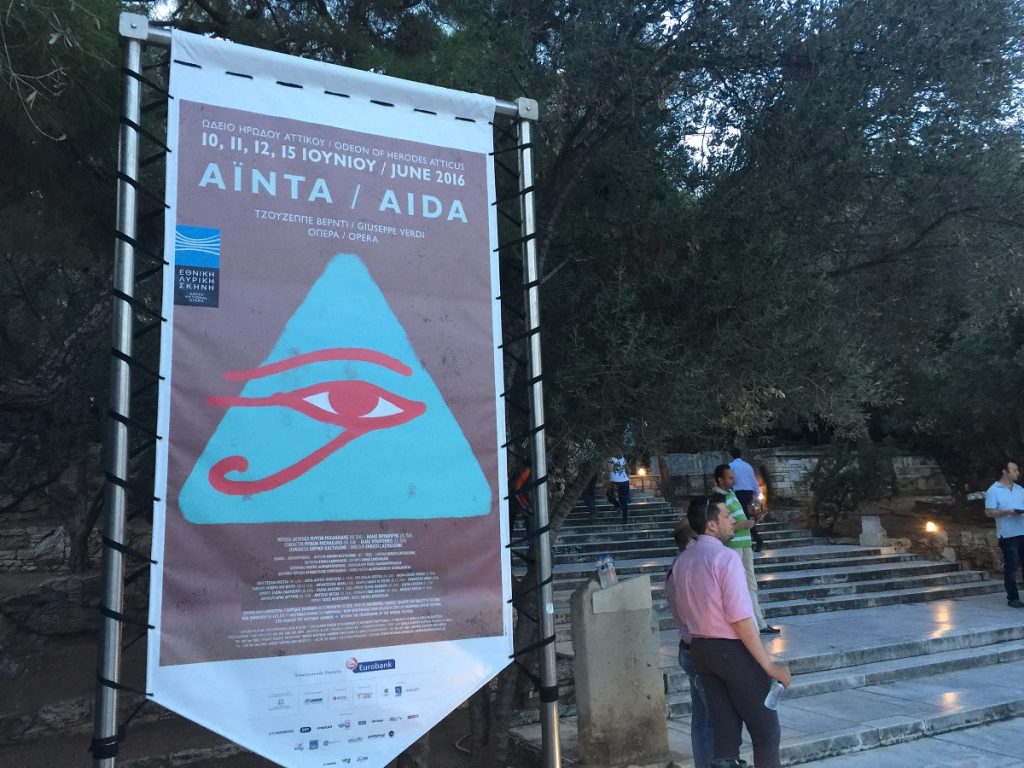 An Ancient Theater in Athens

I absolutely love attending events at this ancient theater. Whether it is a concert, play or opera, there is something about the open-air atmosphere and the unique elegance of the ancient stones surrounding you that makes the experience special. 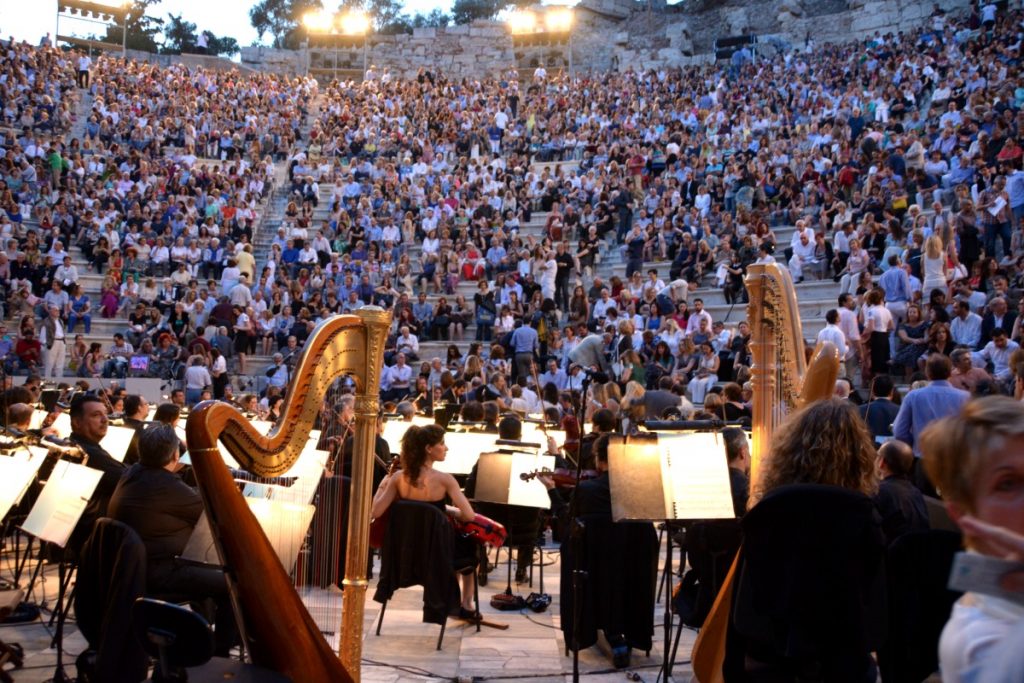 A shot behind the orchestra as the crowd spills in.

I recently attended the National Opera of Greece’s performance of  Giuseppe Verdi’s Aida, an opera with such beautiful music. We were lucky to have tickets! All four shows were sold out. 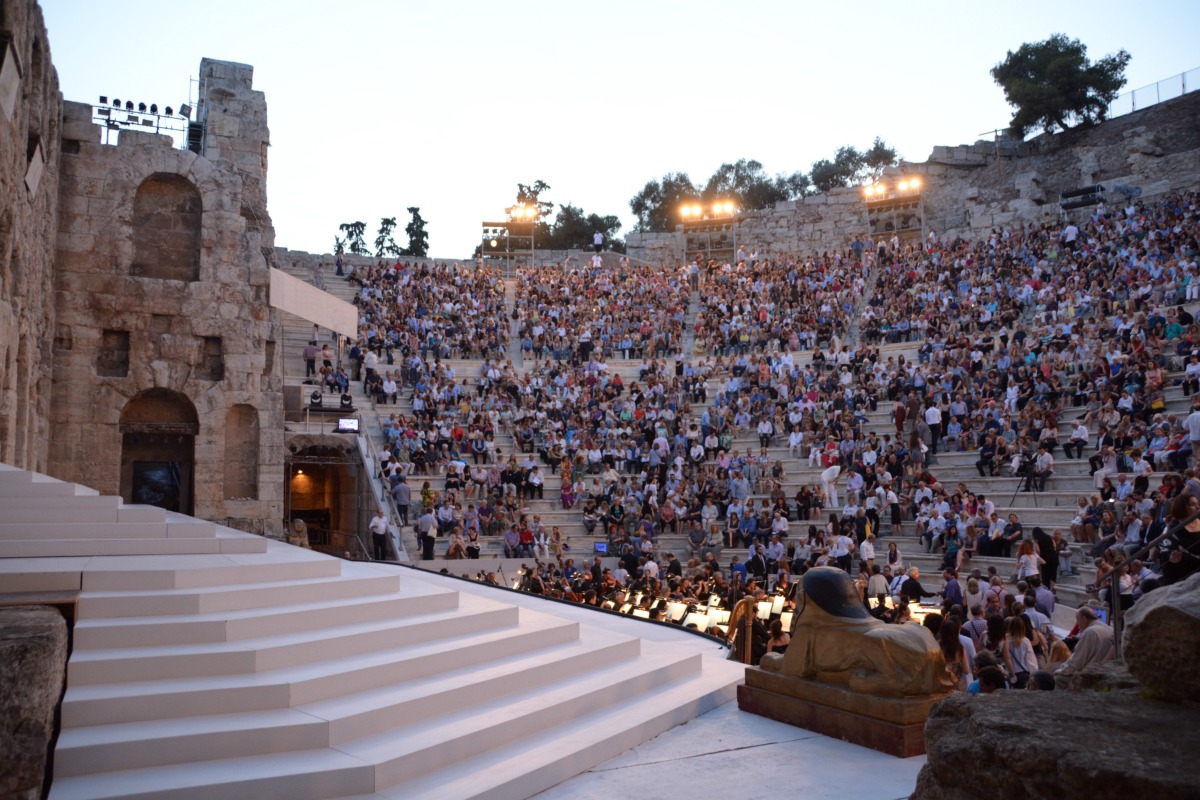 A view from the stage looking to the crowd. 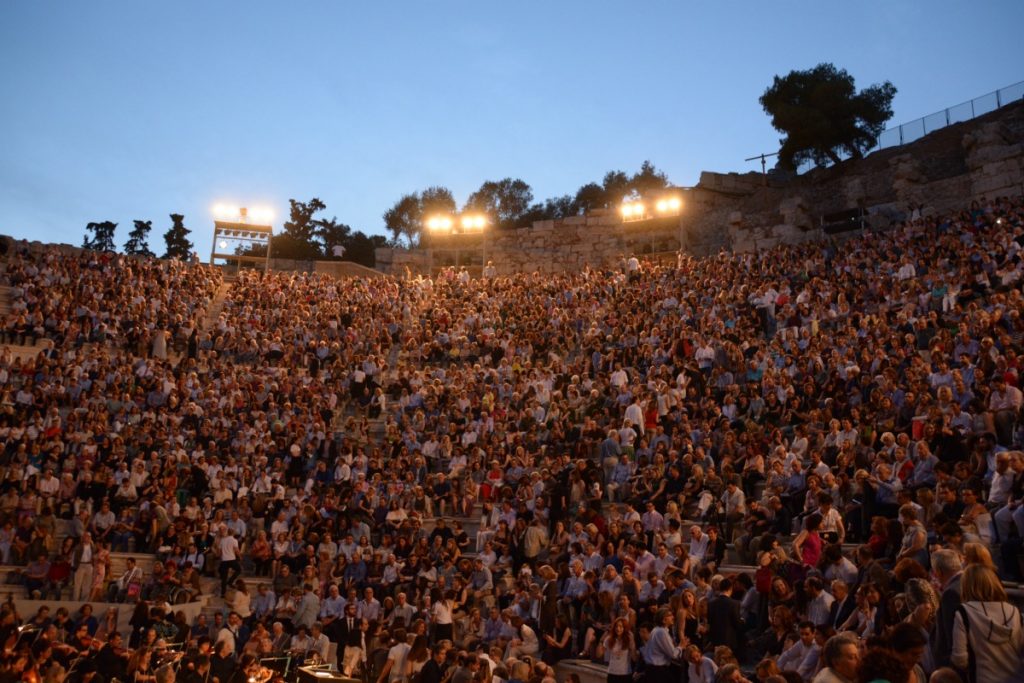 The performance is about to begin!

The National Opera of Greece performed the wonderful opera by Verdi. Aida is about an Ethiopian princess being held captive by Egyptian Pharaohs. 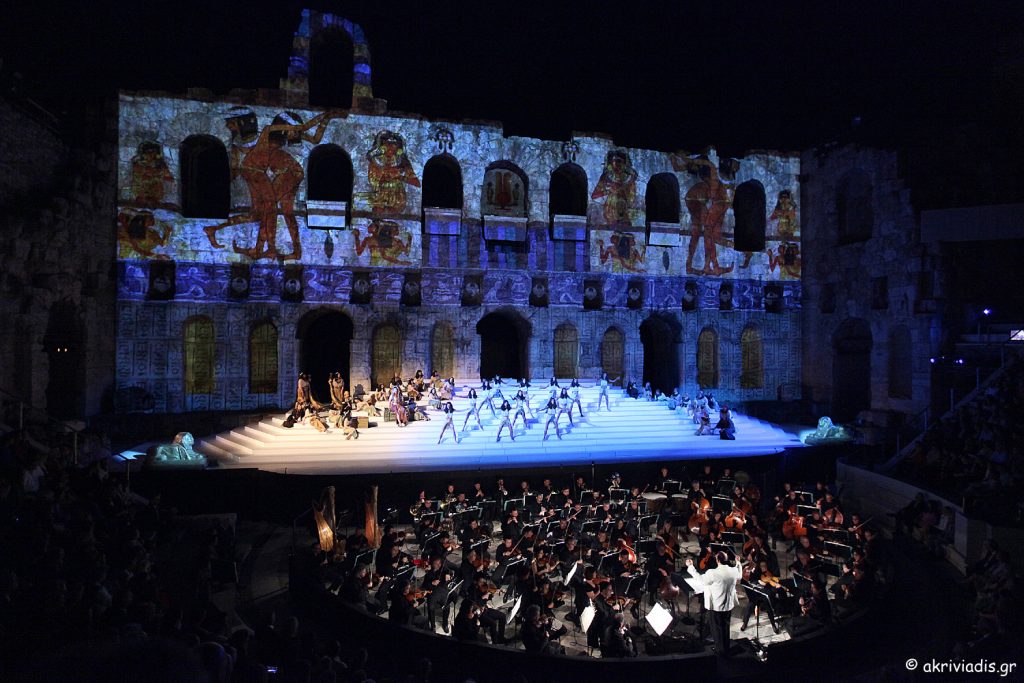 She falls in love with an Egyptian general, Radames. However, the Pharaoh’s daughter, Amnerida, is also in love with him. At the end of the day, Aida, struggles between her love for a man and her love for her family and her home country. I totally love romantic opera drama. 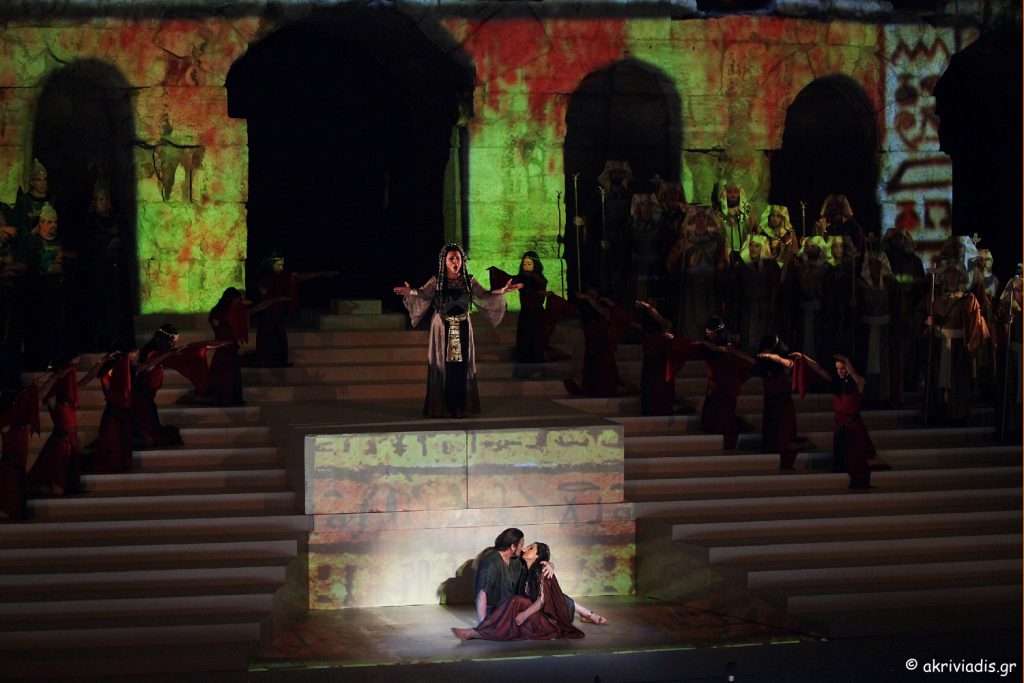 Photo Courtesy of the National Opera of Greece

The History of the Ancient Theater

There’s a romantic reason behind why the theater was even built in the first place. During Roman times, the Roman philosopher and politician Herodus Atticus took on the project to build a beautiful amphitheater in the memory of his late wife, Aspasia Regilla.

The Odeon of Herdodus Atticus was originally built with a wooden roof, and there was once a wall that stood three stories high that was lavishly decorated.  Today, that roof is gone, so are the marble decorations and embellishments.  There is wear and tear. After all, more than 2,000 years has passed.  Modern renovations include the amphitheater’s marble topped stage and seating areas.  The acoustics remain excellent. 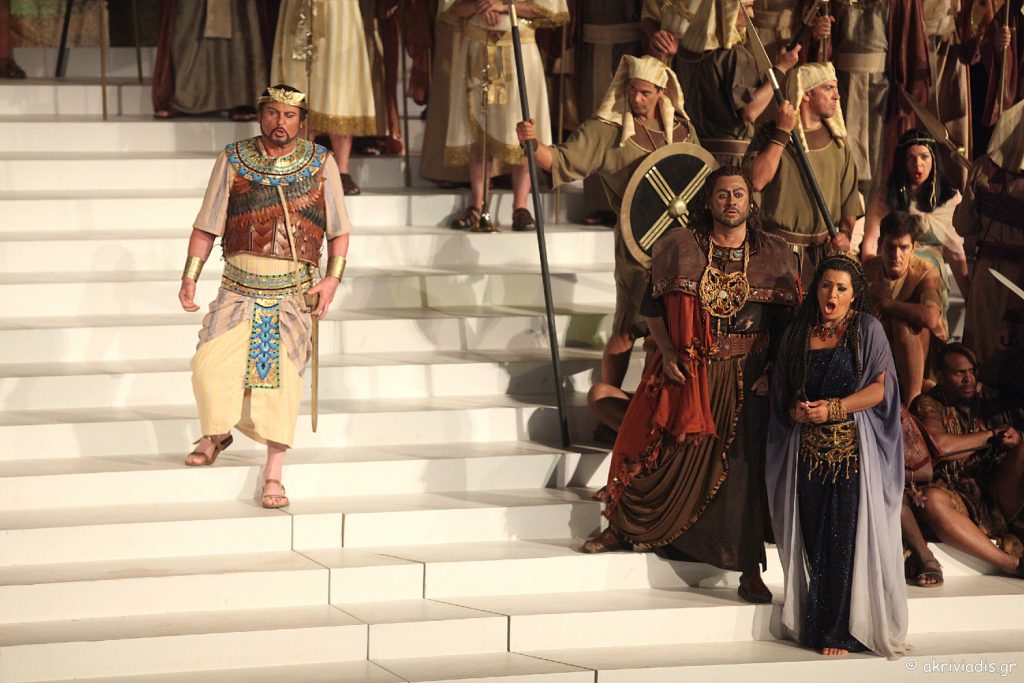 Photo courtesy of the National Opera of Greece 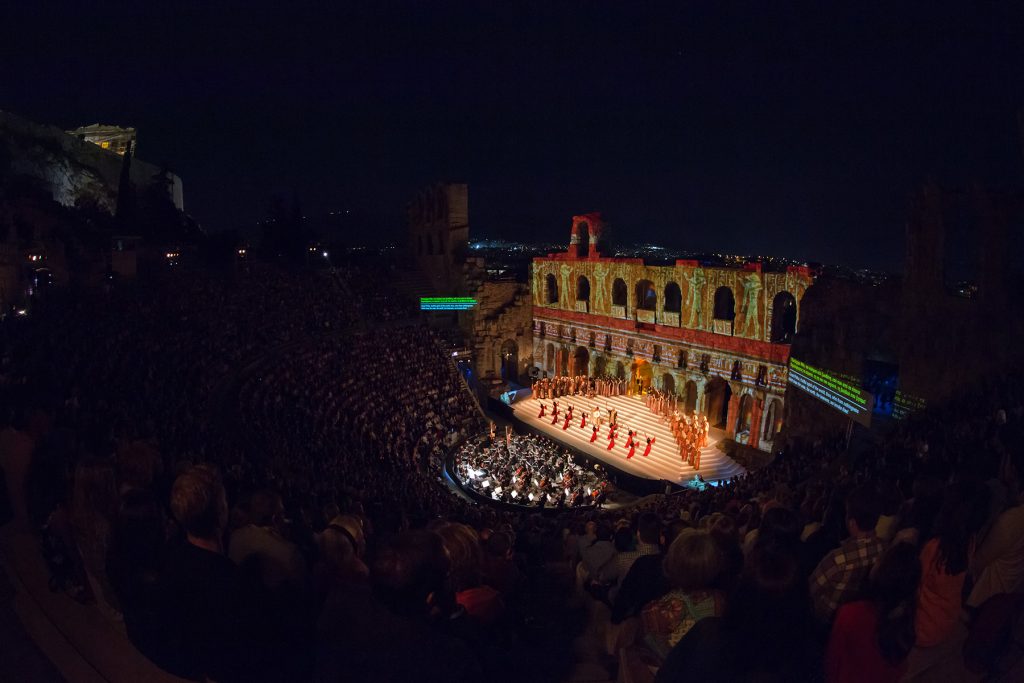 A view from the top! Photo courtesy of the National Opera of Greece

Tips for a Night Out at the Odeon of Herodus Atticus

Odeon of Herodus Atticus is located on the lovely stretch of pedestrian way in the heart of old Athens named Dionysiou Areopagitou.  You’ll find it on the south slopes of the Acropolis.   The theater is a few minutes walking distance from the Acropolis metro station. 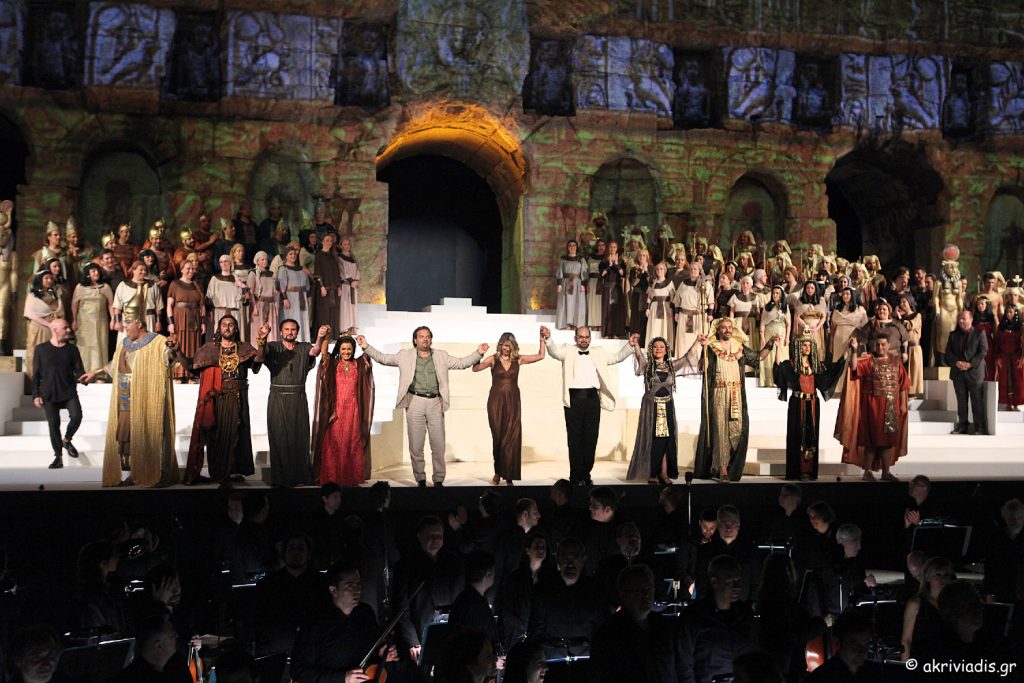 Photo courtesy of the National Opera of Greece

The Ancient Theater at Epidaurus is also a wonderful ancient theater to consider seeing excellent summer performances, a short day trip or weekend trip out of Athens. This is still on my bucket list.

This experience was hosted by the City of Athens Convention and Visitors Bureau.

Have you ever seen a performance in a historic or ancient theater in Greece? I’d love to hear about it?