A Food Tour in Athens

Searching for a food tour in Athens? Eating Athens gives you the opportunity to sample a few Greek food staples and to buy them if you like them.  Along the way, you get an introduction to the city’s modern food culture.

One thing I love about Athens is the fact that many mom and pop stores haven’t gone out of style.  Since I prefer to support small and family-run business, I think it’s great that Greece’s largest city, hasn’t been bogged down by big chain stores and the prepackaged artificial foods that go along with them.

Yes, there are supermarkets and I do go to them. However, the idea of taking time out to visit the local butcher, spice shop, wine shop and farmer’s market is still very much alive and well in this country.  I have learned that Greeks prefer to have their food products fresh, local and organic. 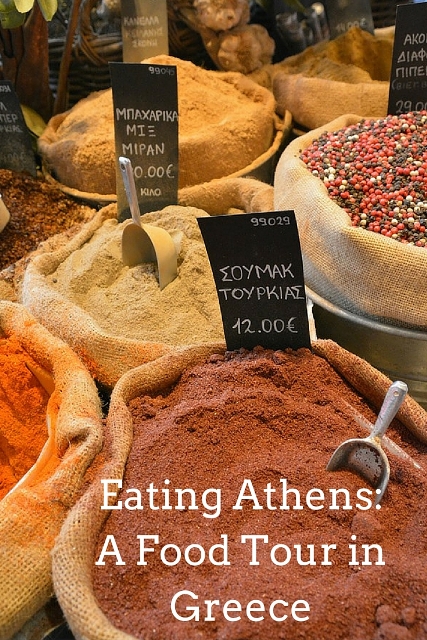 Take a look at the name of the tour and that equates to a lot of eating possibilities! Athens is a city of five million people with many districts. Within those districts there are many places to shop for foodstuffs and to dine out. Eating Athens narrows it down, taking visitors to food stops in heart of Athens including the historic neighborhoods of Monastiraki and Psyrri. Every Saturday afternoon, foot traffic fills the streets in these neighborhoods. Locals push in and out of the shops to get their food shopping done on the weekend. Most places are closed on Sundays in Greece. 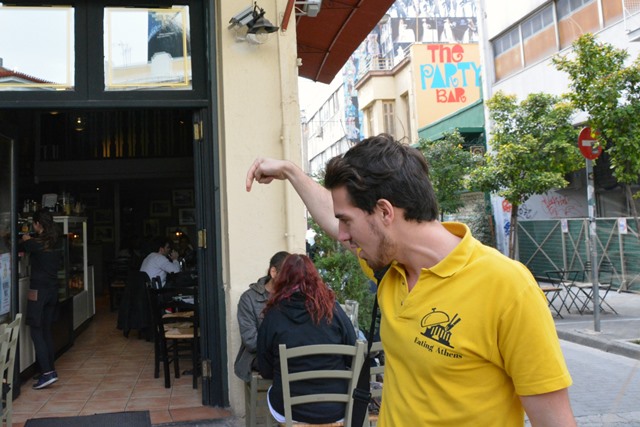 Our guide has a passion for Greek food

Our guide George Ionas led the way through that Saturday shopping crowd with ease.  He wore a yellow polo with the tour’s logo. The bright color matched his infectiously bright smile and cheerful demeanor.  The self-proclaimed “Greek food lover” told us he is an engineer by day and on weekends he organizes Eating Athens tours to offer his perspective on his city’s food scene.

One of the first main stops was Evripidou Street. 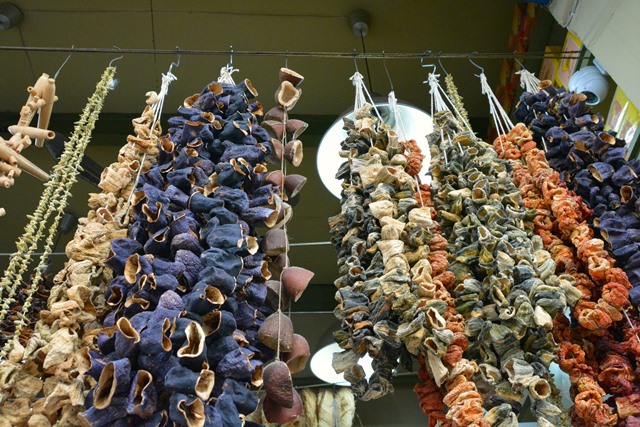 on epvripidou street in athens

I had been on many the “spice run” on this street. As usual, dried goods and herb specialty shops sold colorful spices that are measured out of burlap sacks. Barrels filled with twigs of natural ingredients like tsai tou vouno or Greek mountain tea, tightly tied with string. Dozens of dried nuts and fruits filled wooden crates and barrels or were piled inside windowed drawers. 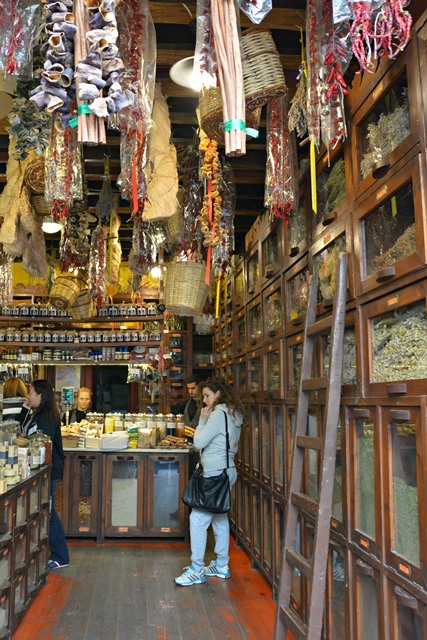 We then stopped at Miran, a Greek butcher shop where, in the middle of the buzz of the afternoon’s meat buyers, we took a seat at a bench to learn about Greek meats like kavourmas, pastourma and also sampled a bit of Greek grilled sausage. 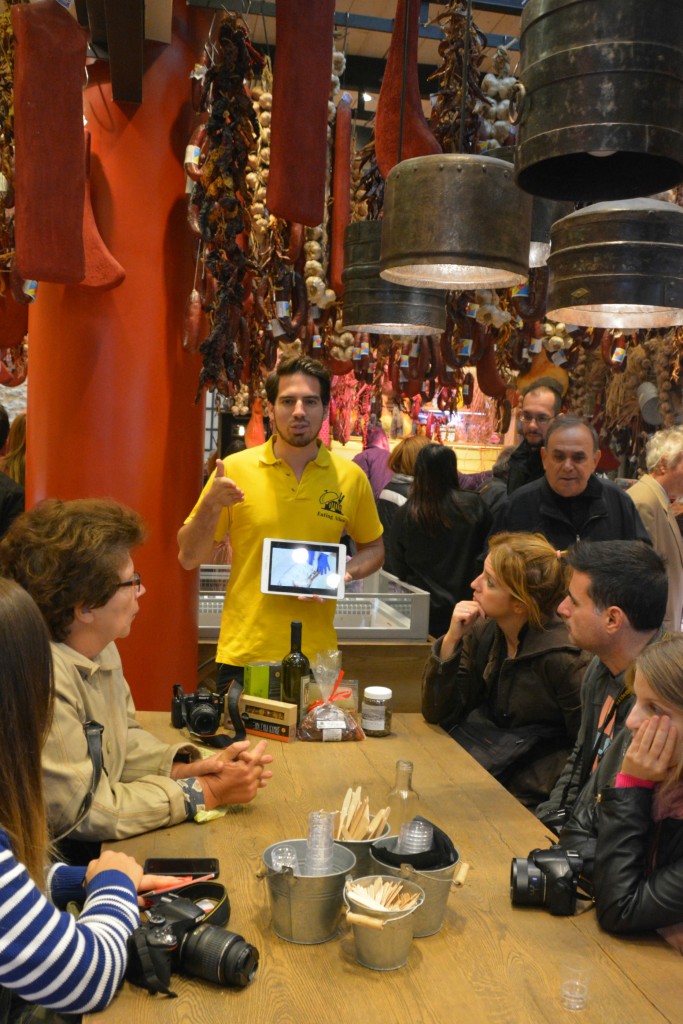 A lesson in Greek meat at Miran 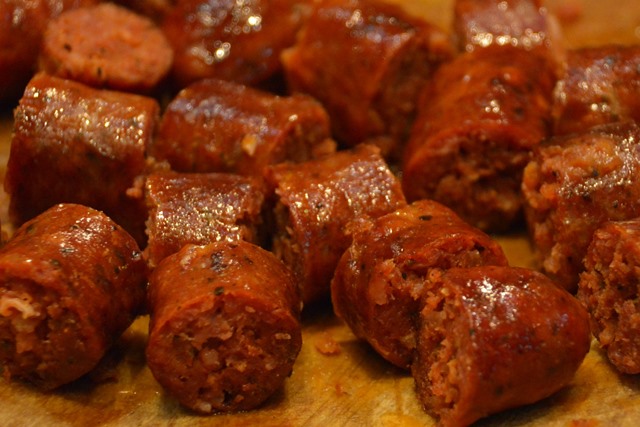 Greek Olives by the Barrel

Then, we headed next door to a small shop stocked with large barrels filled with just about every Greek olive variety. 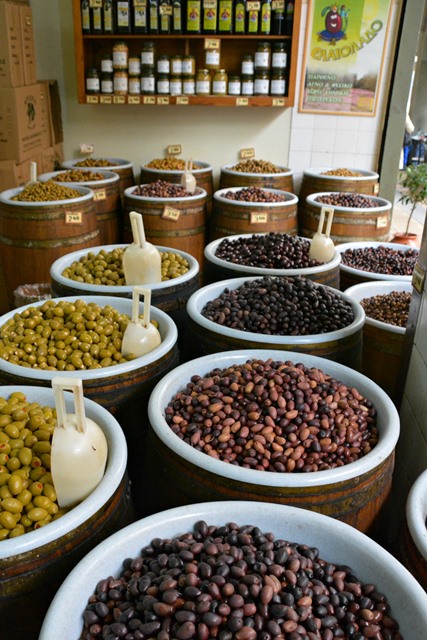 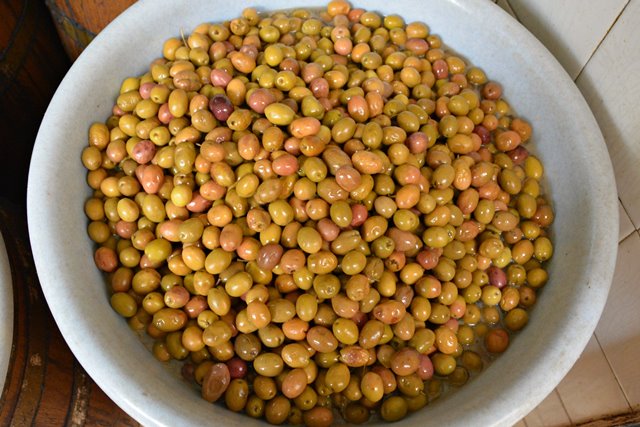 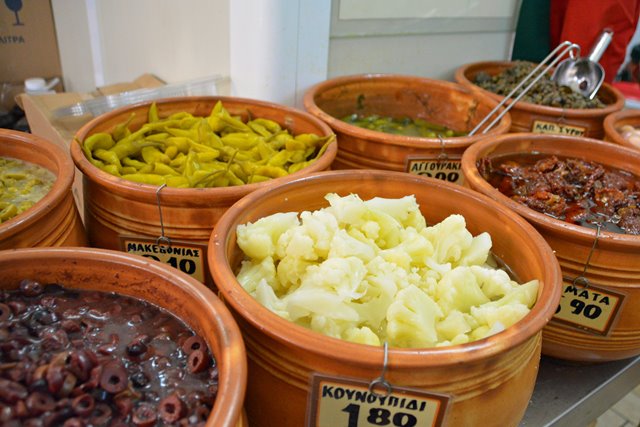 The Greek olives at Elies Ariana or Olive Shop Ariana ranged in  shades of light green to deep purple.  George also pointed out another one of the shops wares: pickled vegetables. These sour tangy  kind of vegetables are common to the Greek diet but exotic to a visitor’s palate.  For example, I have come to like pikles. They are pickled vegetables, often a mix of carrot, cauliflower and green peppers. I also love almond stuffed green olives.  We all sampled several olives (okay, I plucked a few more).

I also tried  chubby mini onions called volvoi  for the first time. They were delicious, too! 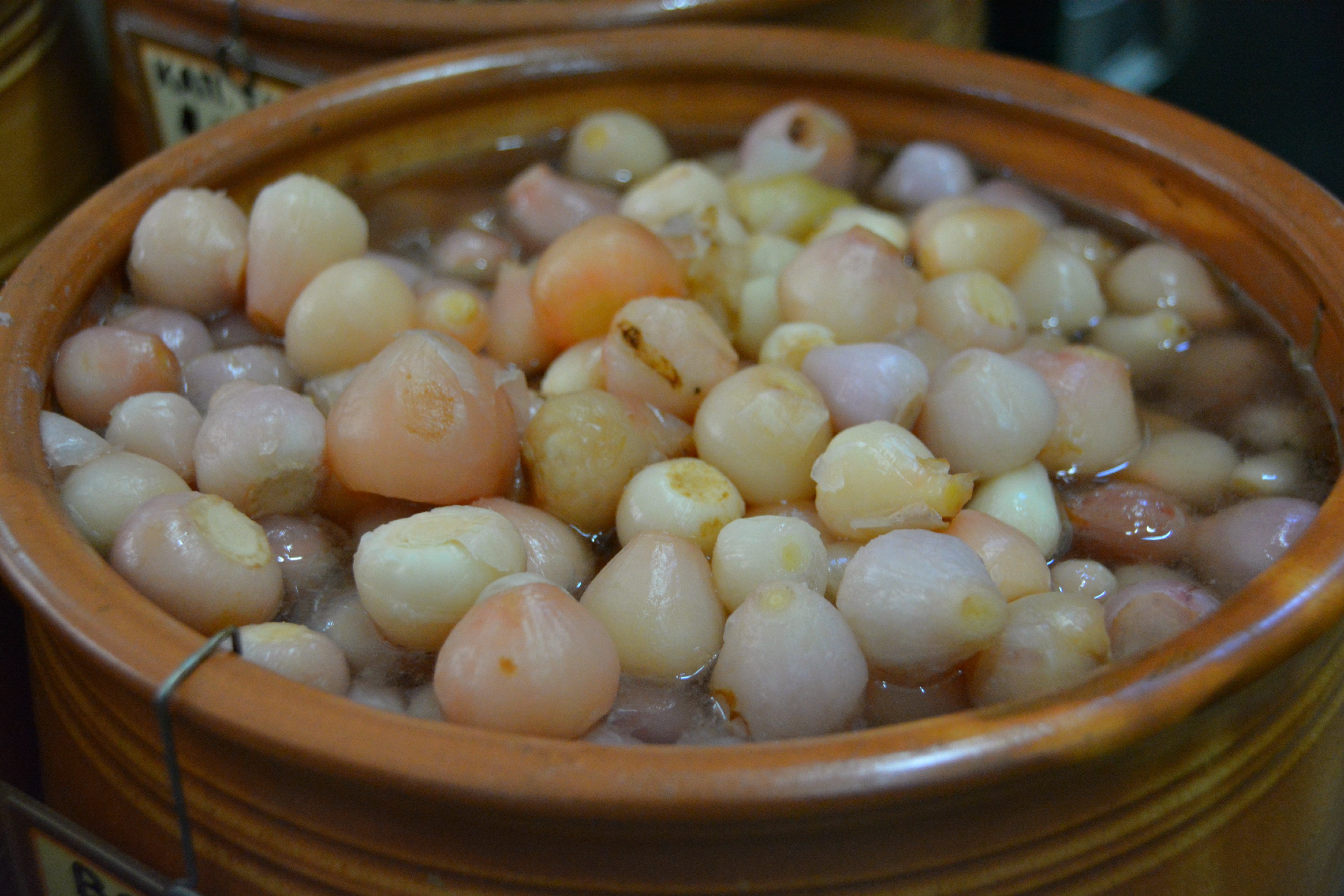 Next door at Oinopantopolieo Oikonomidi, we were ready for a taste of another important part of the Greek diet: wine. 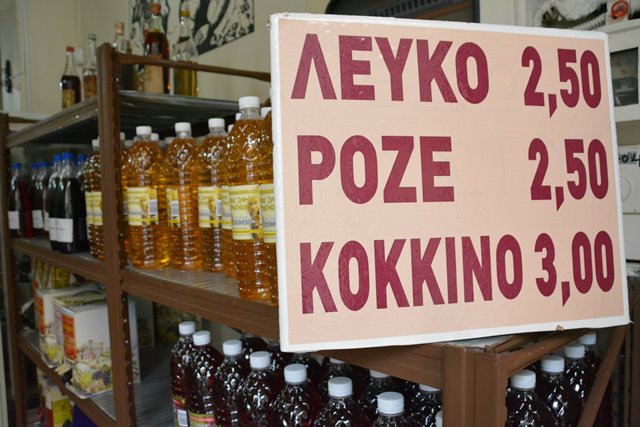 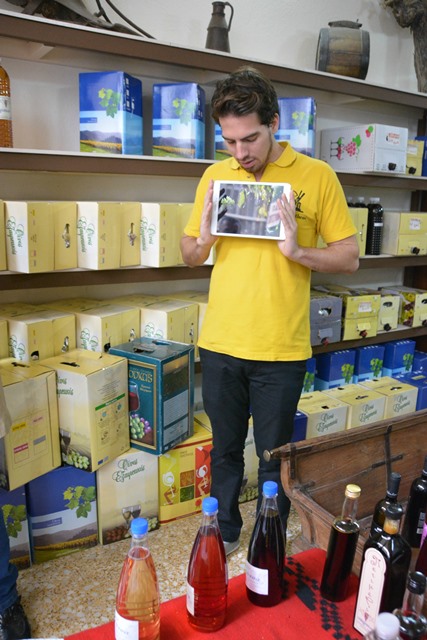 George shows us a video about Greek wines

Living in Greece, I learned over time that some Greek wines don’t necessarily have to be packaged in a glass bottle, logo-ed and labeled.  Sometimes, small distributors simply fill their product in plain plastic bottles and guess what — they’re good!   George explained a bit of the wine making process and played a small  video on his iPad and then we were ready to sip a few varieties. 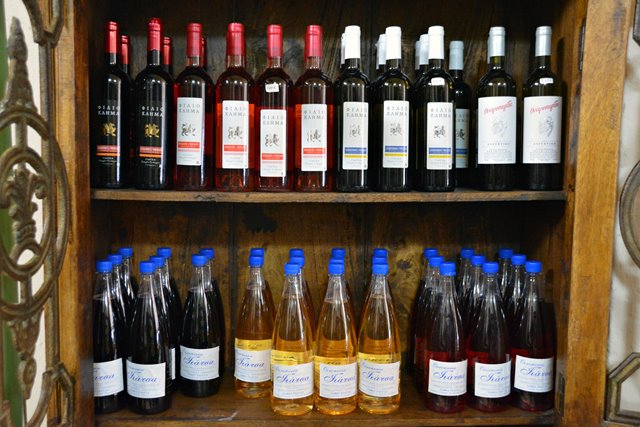 My conclusion? I ended up buying a few bottles to take home.

A food tour through the center of the city wouldn’t be complete without walk through the Athens Central Market, also known as the Varvakios Agora. 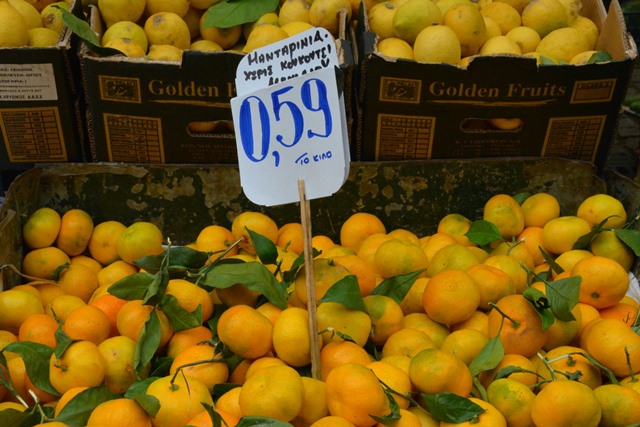 Fruit for sale outside stalls of the central market 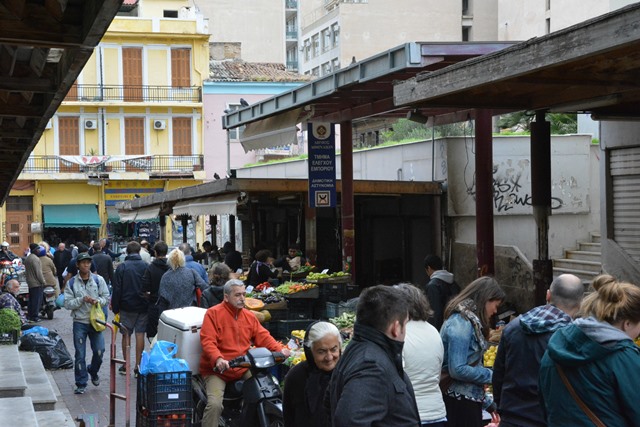 Fruit stands outside of the central market 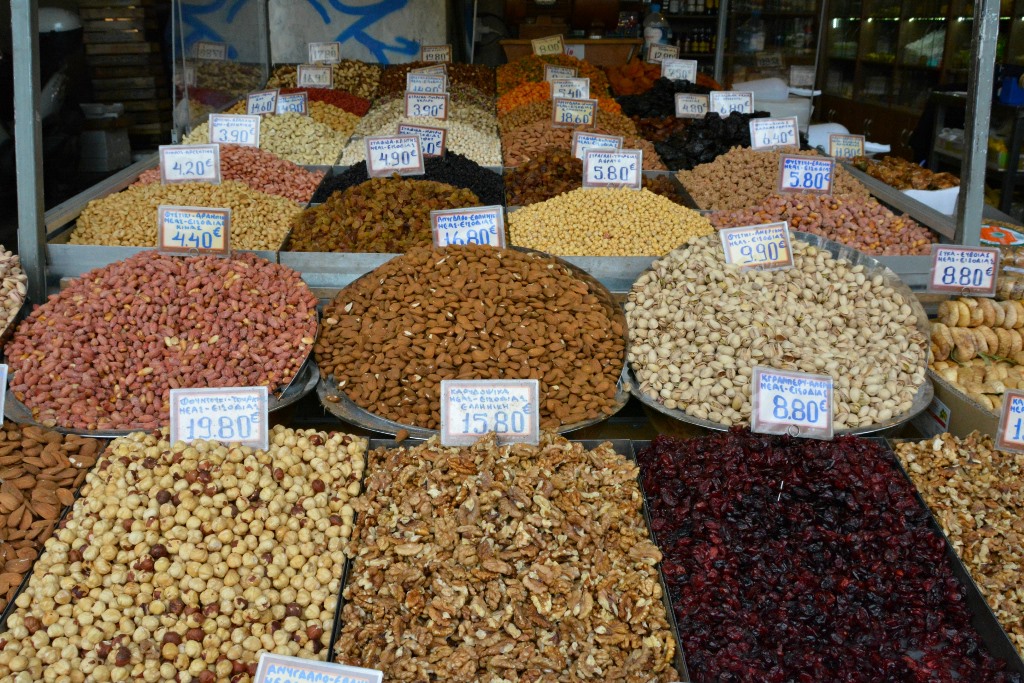 The pungent aromas and deep whelps and sales calls of fish mongers and meat sellers were familiar to me but always a colorful place to experience again and again. 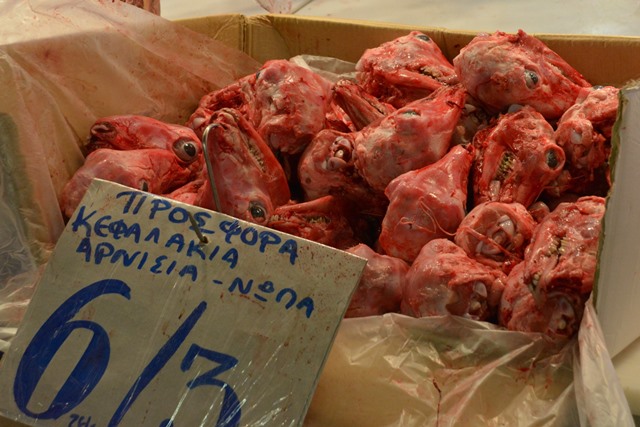 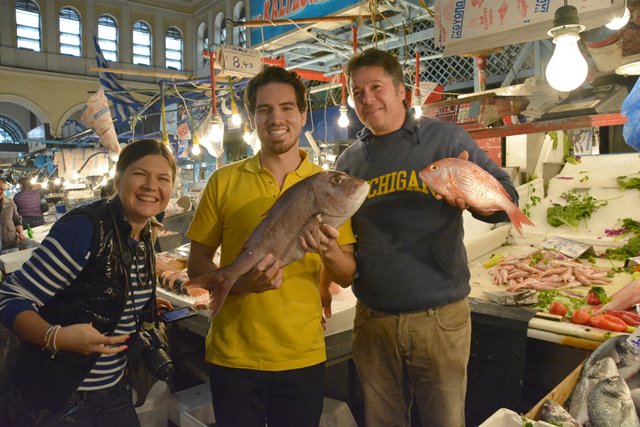 Tour guide George and fish seller Giannis Kasidokostas and me 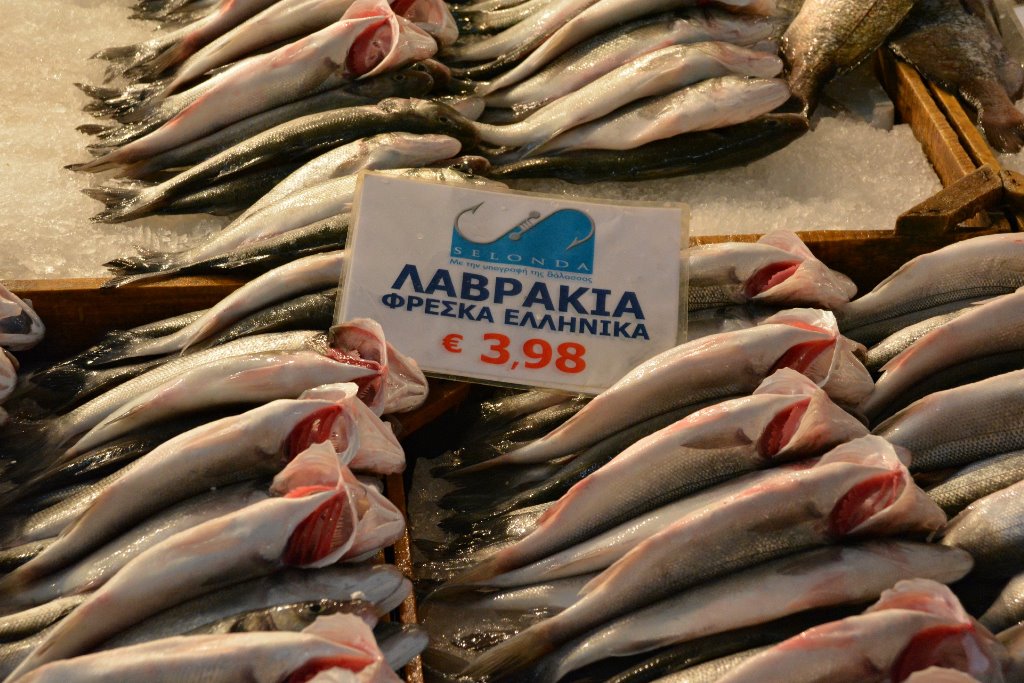 George finished our market walk at Kreopoleio Aggelis or Angelis Meatshop. In that quiet corner shop, butchers donning classic white butcher smocks cut up some Greek beef carpaccio just  for us to sample. We ended our Greek meat experience back on Evripidou Street at Miran to sample some Greek dried meats. 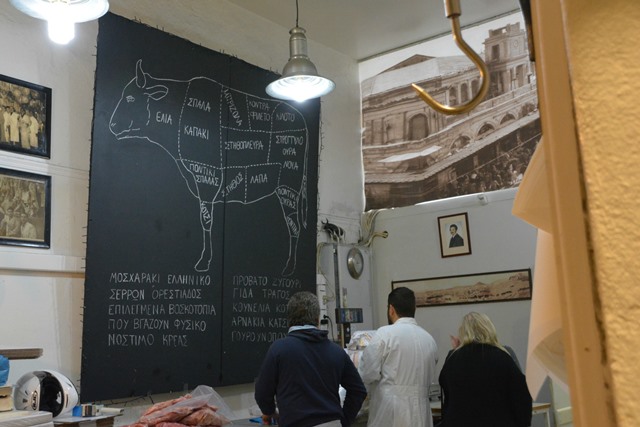 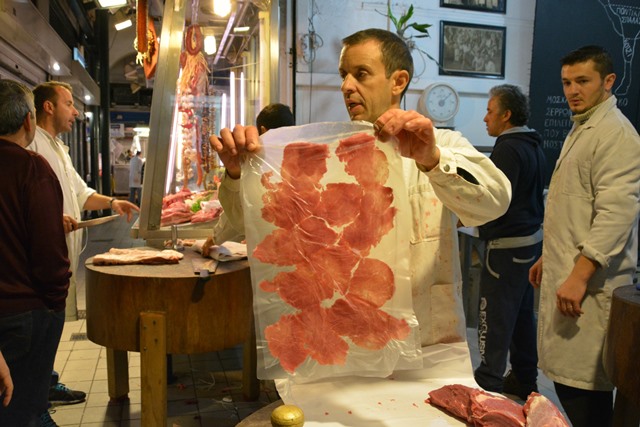 We ended up in Psyrri’s charming little Plateia Iroon to have a sweet at Serbetospito. Its English name is Nancy’s Sweet Home. Whatever you want to call it, the shop is known for serving up some of the city’s best Greek desserts.  It had been awhile since I had visited, but as soon as we got our servings I realized their huge portions of ice cream and pastries and cakes hadn’t changed a bit!  The ice cream was kaimaki – a unique native flavor to Greece that is rarely found abroad.   We also enjoyed small glass cups of warm rakomelo or honey and cinnamon infused raki liquor to warm us up on that chilly afternoon. 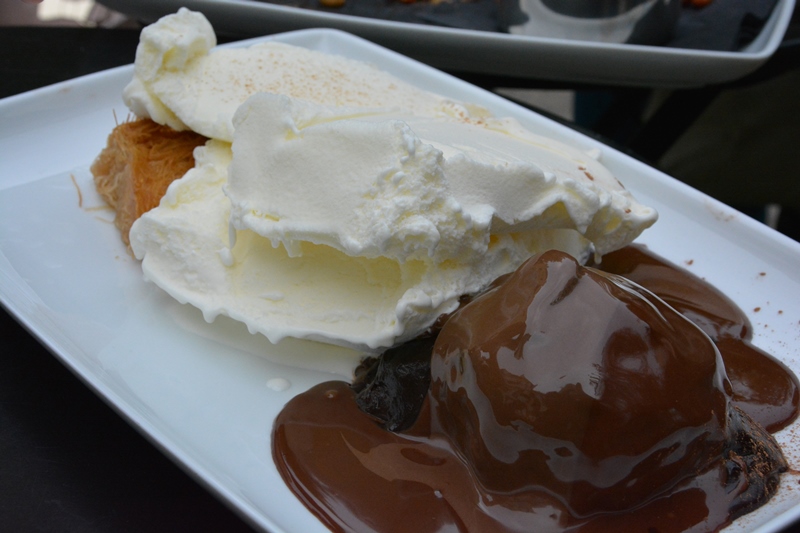 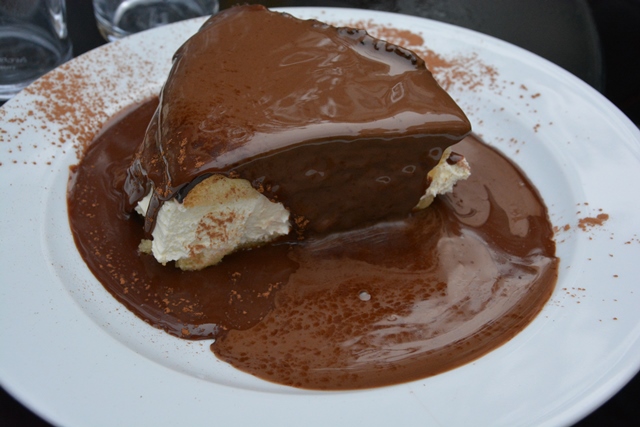 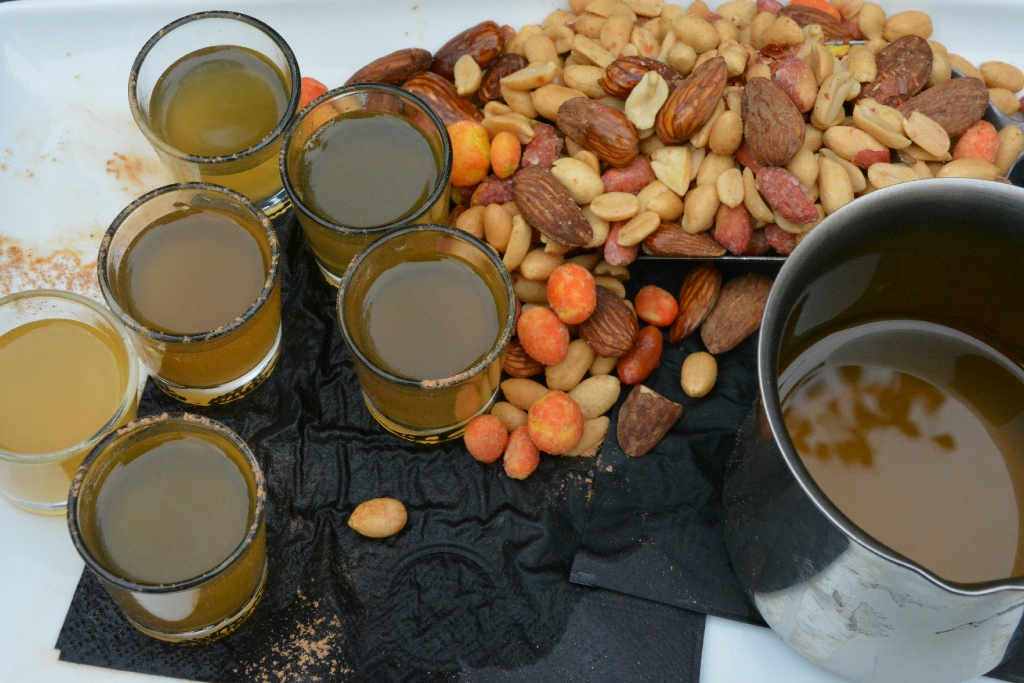 Warming up with rakomelo!

A Food Tour in Athens and More

There are many types of food tours in Athens to choose from, each with a unique perspective on the Greek food experience. Eating Athens walks you through a small circumference of the city’s oldest districts where you get a taste of how today’s Athenians shop for their food.  For a newbie to Greek tastes, Eating Athens gives you the opportunity to sample olives, drink a bit of local wine, try some cured meats and Greek sausage and learn about the process behind making all of it.  Finally, it ends with a huge dollop of Greek ice cream and slice of traditional Greek dessert sweetness at one of the more popular local dessert cafes in the center of Athens. It’s also great to have a tour guide that loves his subject!

One downside for me was a stop at a bubble tea shop. For Greeks, this is a new concept. However, as an Asian American, I grew up drinking a version of the stuff. My family even made it at home so I didn’t think it fit in a Greek food tour. In the end, it was a look into a new food trend for Athenians and chance to stop and have a refreshing drink.

If you are looking for a food tour that fills you up, this isn’t the tour. Again, it is for sampling some products, a lot of dessert — but not about traditional Greek meals check out this Athens Gourmet Food tour.

Have you ever taken a food tour in Athens. If not, have you tried any of the Greek specialties on the Eating Athens tour like olives, wine, cured meats or Greek desserts?