Nightlife on Sifnos was surprisingly happening!  I learned pretty quickly that Sifnos may be a little island but it has a lot of style. That style definitely shone at night.

As one of the less touristic Greek islands, Sifnos offers sophisticated options for going out on the town. In Sifnos, you’ll find cozy little hidden places for a drink, some chic martini bars and a good selection of dance clubs. Plus, you won’t want to miss an annual street party held by one of the best radio stations in the world 😉 Well, in my opinion…

During my stay in the middle of August, at the peak of summer tourist season, well-heeled party people strolled the narrow picturesque paths and alleys that made up the island capital of Apollonia.   It vaguely reminded me of Mykonos, just not so bold or congested.  It was crowded, but just enough. 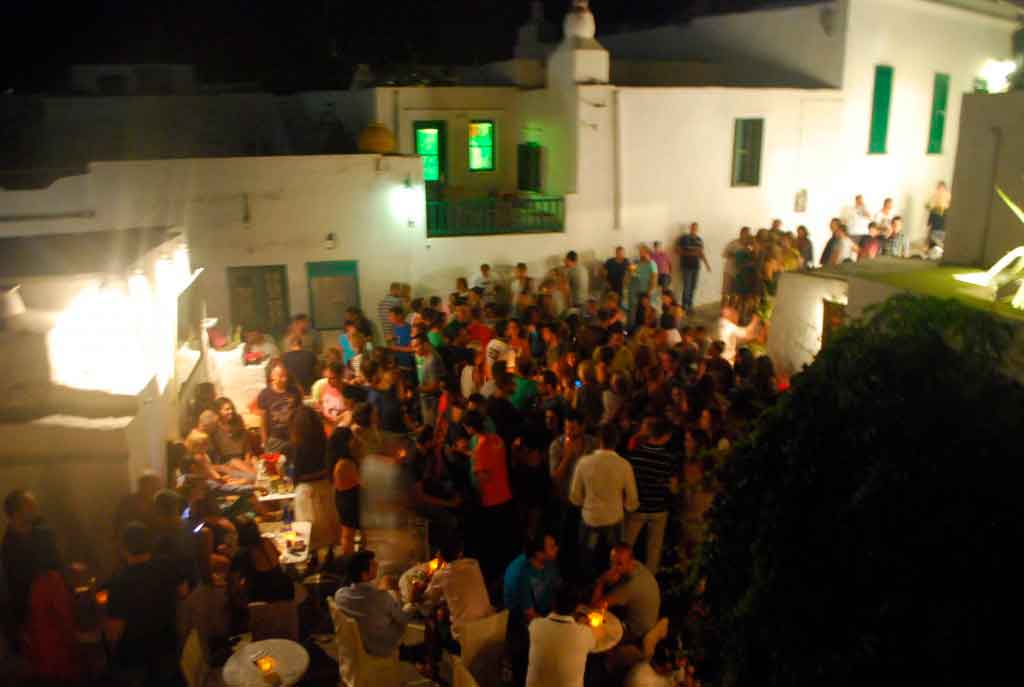 In Apollonia we had a great time at Cosi, an outdoor bar that offered a classy and fun vibe.  It had nice drinks and a good looking crowd. After two a.m., the DJ easily got everyone dancing to the latest pop and dance hits.

The hilltop village called Castro had its own vibe to the tune of  low key café bars. They were beautifully decorated with open air balconies that embraced the evening views. We liked  Dolci for its impressive design and draped seating.  Konaki, located right across, seemed to have an equally chic atmosphere. 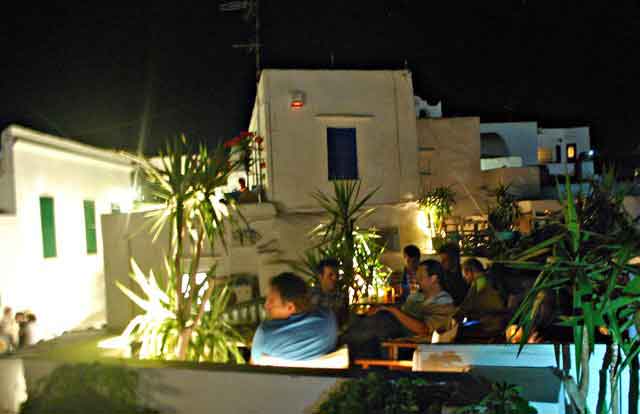 We happened to be there the night the popular Cycladic islands radio station Radioactive FM held its annual party in Artemonas.  It was awesome because everyone happened to be invited!  I’m a big fan of the station, which reaches Serifos.

Radioactive’s music was always a great eclectic mix. After that night, I learned the station also knows how to throw a street party. It was a scene in itself.  By the time we arrived around 3 am all of the free alcohol was consumed, so folks were headed to a nearby periptero (kiosk) for beers and Bacardi.

Foreigners and Greeks alike of all ages packed the street in front of the tiny radio station. Everyone was dancing in the yard, in the narrow cobblestone path and on top of ledges.  I can especially remember when The Power by Snap! bursted out of the speakers things got really kinda hectic. (I had to…)

If you are in Sifnos in August, definitely check Radioactive  FM’s website to see when the party will be taking place.

How to Get to Sifnos

There is no airport on the island, so the only way to travel to Sifnos is by ferry.

In the summer season, there are ferries that depart for Sifnos straight from the port of Piraeus in Athens. If you are on another Cycladic island you can typically find a ferry connection to Sifnos, as well. I traveled to Sifnos from Serifos. Check www.openseas.gr for updated ferry schedules.

Also, check out my blog post about the Castro of Sifnos.

You can decide on where you want to sun tan by checking out my post on the best beaches of Sifnos.

Have you ever experienced nightlife on Sifnos? Where did you go?