Poros Island: Top Things to Do

On Poros island, many of the top things to do can be done in one day.  The Saronic island is just an hour boat ride from Athens.

Poros Island: Things to Do

While you can take a ferry to Poros from Athens’ Piraeus Port, my journey there was a stop on an Olympic Cruises excursion. The day cruise offered a “peek” at islands closest to the capital.  Cole, one of my best friends was visiting from New York, so we booked a few tickets to see what it was about.

The cruise ship left from Flisvos Marina early in the morning with the plan to stop on three islands: Poros, Aegina and Hydra. At the last moment, Hydra was cancelled because of a military exercise that prevented the boat from docking there.

That meant we had a little more time on the other two islands.

Here’s what we did in Poros:

1. Walk to the Clocktower

Once we docked in Poros, we had three hours. We didn’t have a plan. Turned out, we didn’t need one. Upon docking in the port we easily followed a route that headed up a few narrow streets to a hill where the island’s landmark stands: the clock tower.  The tower has been a fixture on the island’s “skyline” since 1927.  For the short time we had, it turned out to be a perfect spot to enjoy the best panoramic view from the island. 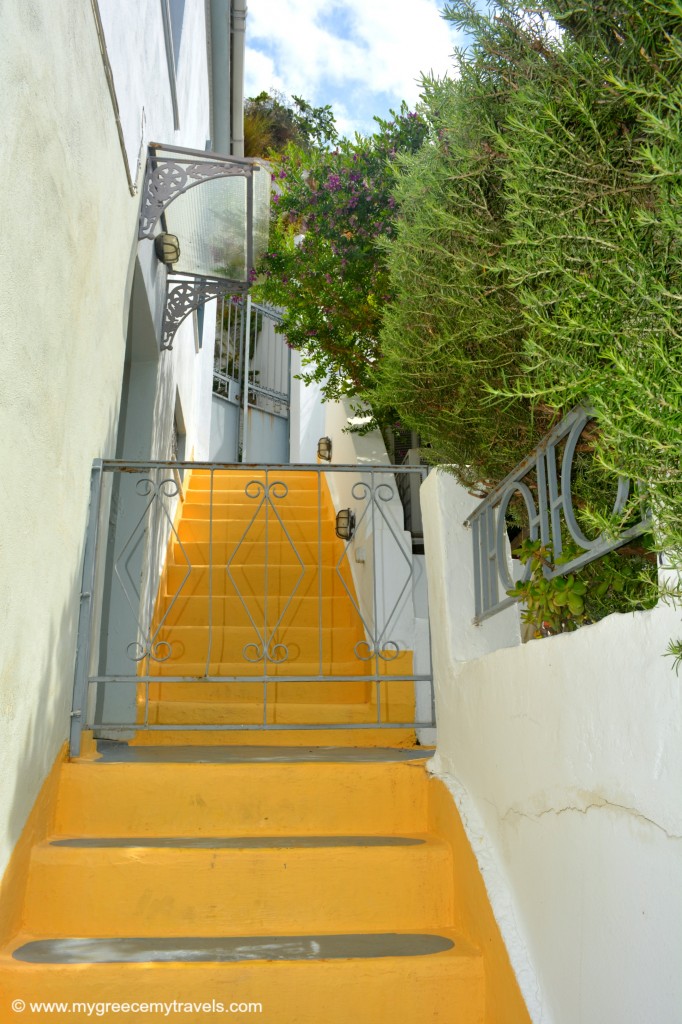 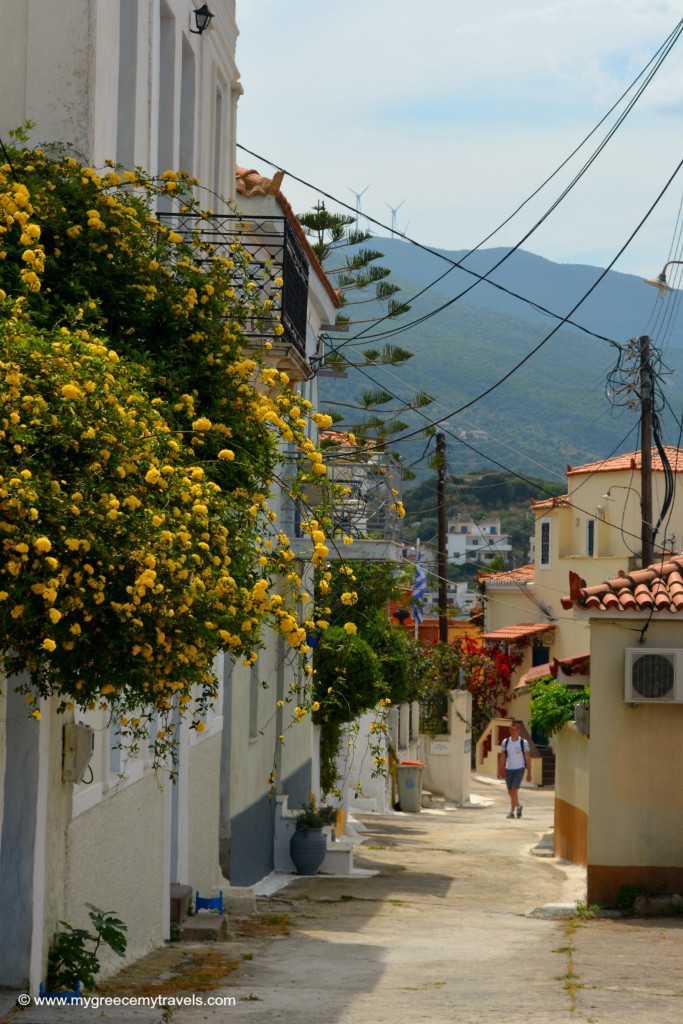 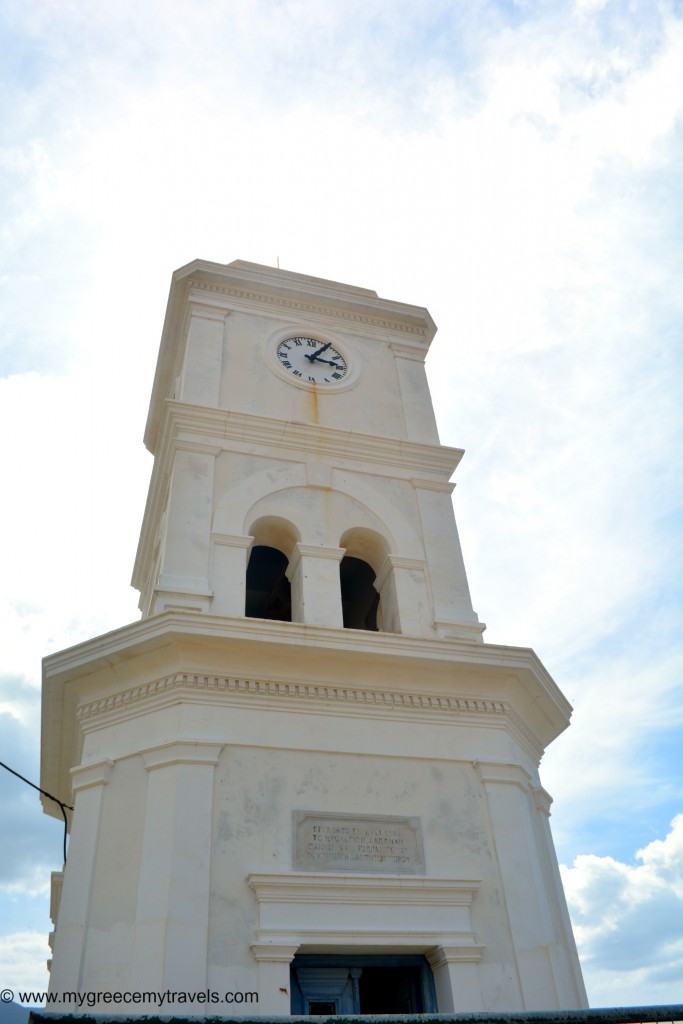 The clock tower of Poros. 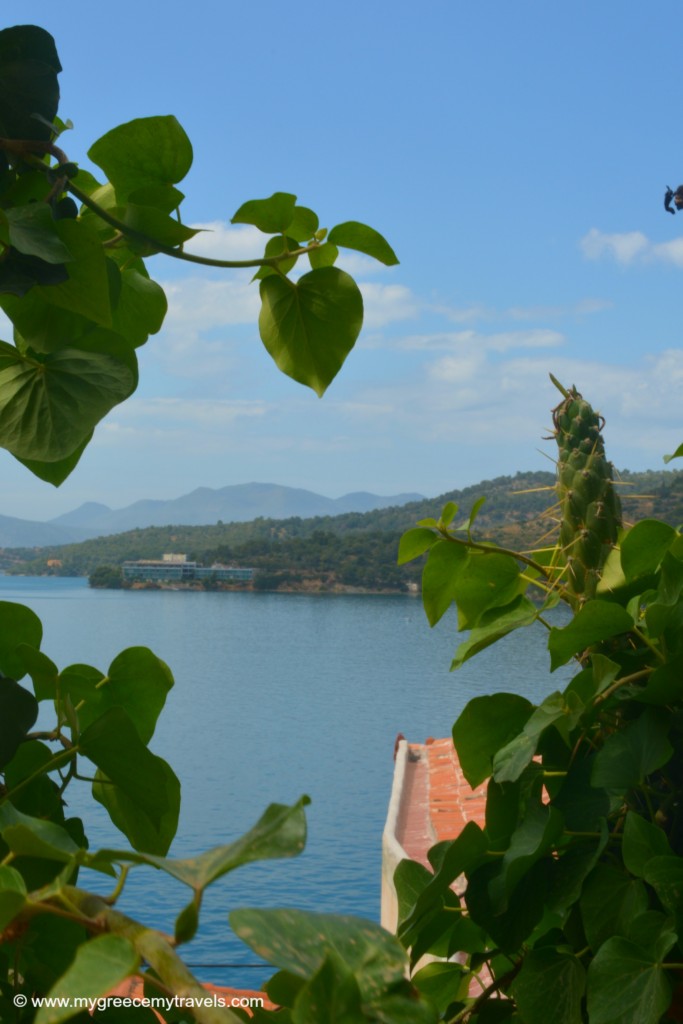 The small paths back down lead to a pedestrian promenade on the harbor lined with souvenir shops, touristic business and sea-facing taverns and cafes. 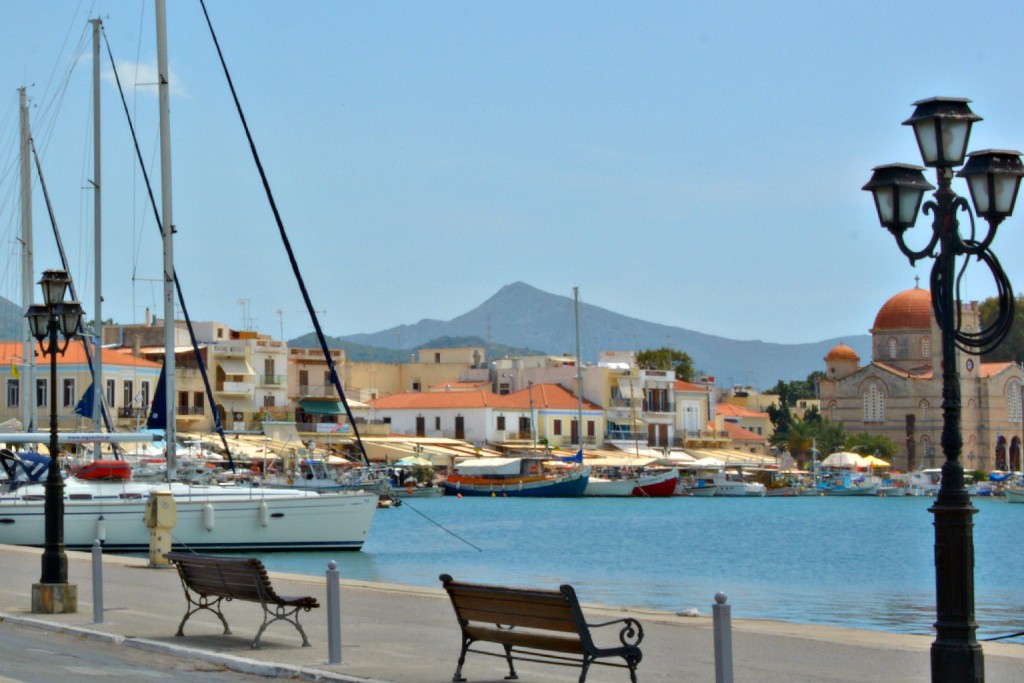 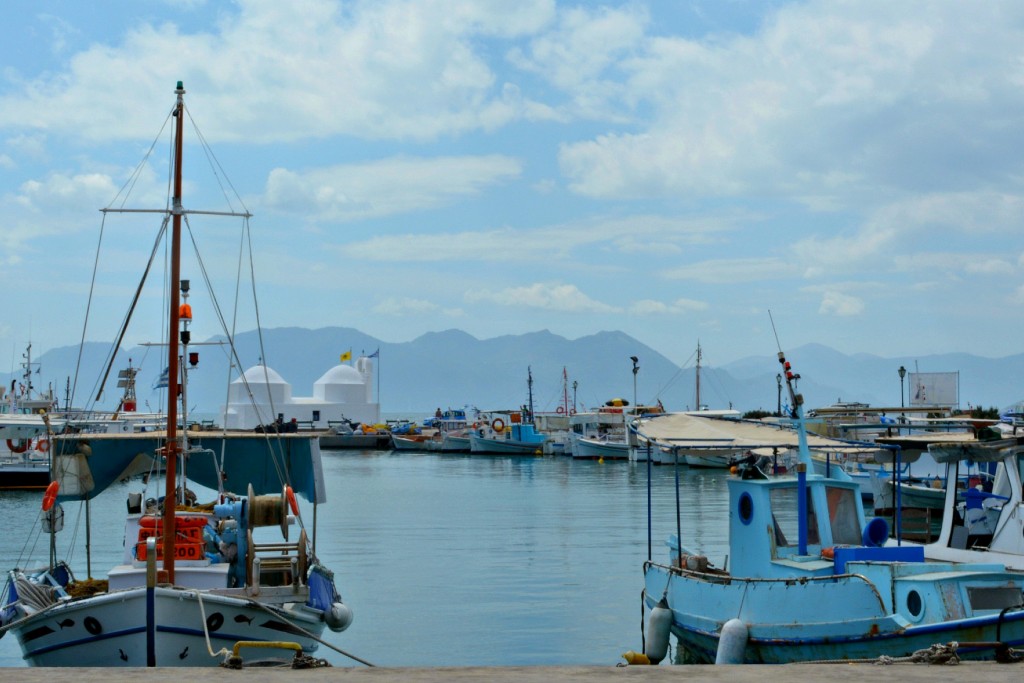 Poros is actually two separate islands that are connected by a small bridge. The town center of Poros island is built on the smaller of the two islands called Sfairia. The other island is called Kalavria and together with Sfairia they are known as Poros. There’s a small bridge that crosses into Kalavria. 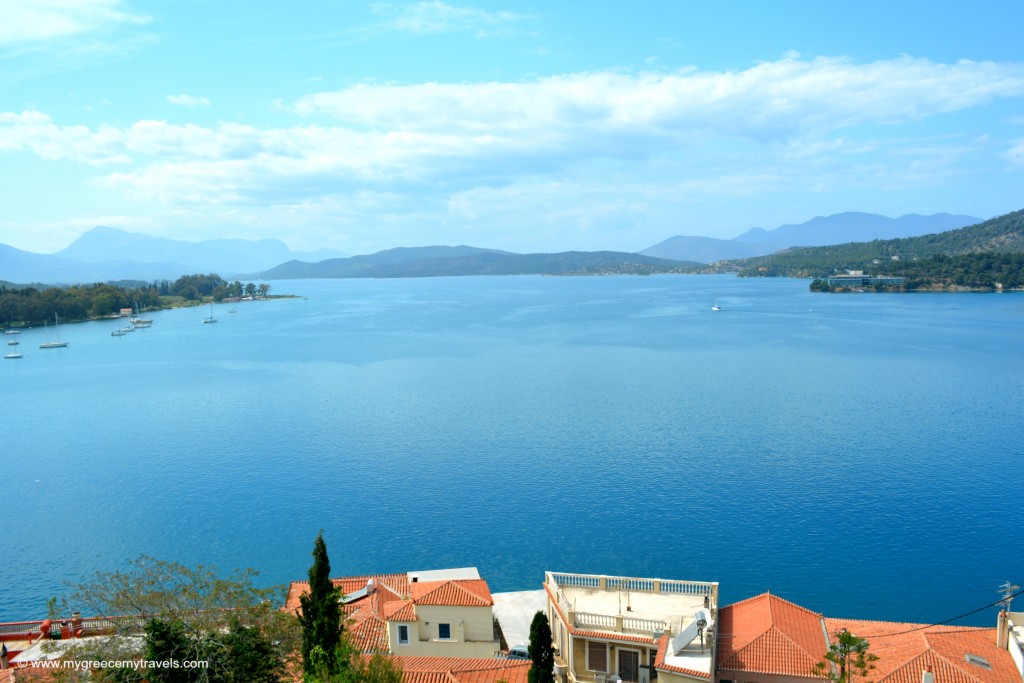 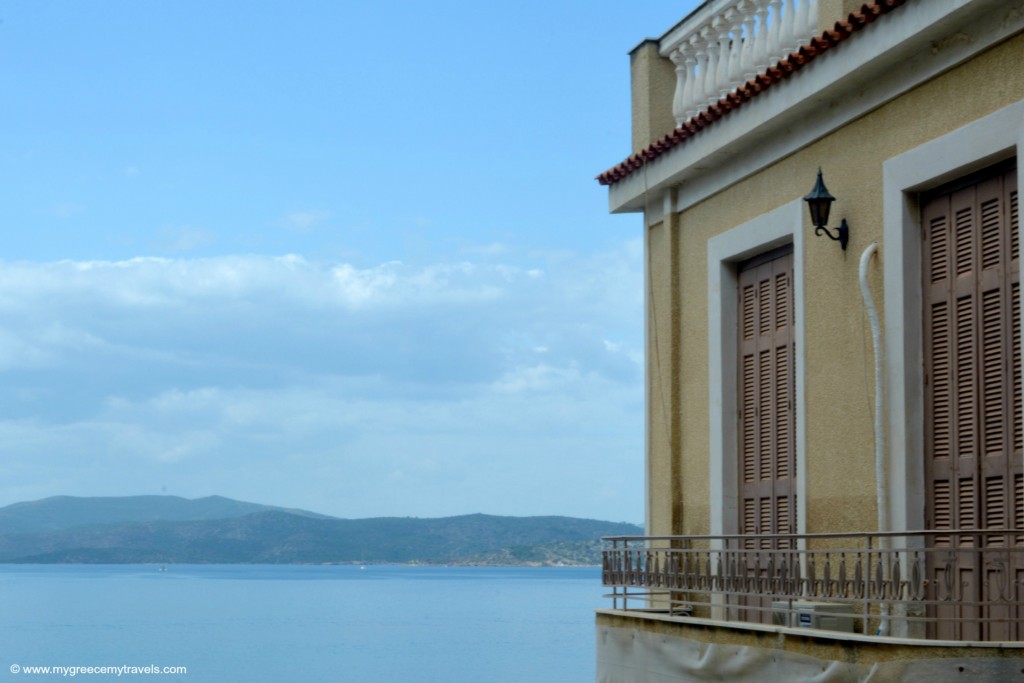 Love this view in Poros.

More Things to do on Poros Island

If you have more time than three hours consider visiting:

The naval building is a historic monument. It is off limits to the public because it still serves as a training center for the Greek Navy.

Poros has an archaeological and a folklore museum.

Located in the northern part of Poros since 520 BC, the ruins were once an important center where the ancient Greeks met to deal with religious as well as civic issues for city states including Epidauros, Prassies, Hermione, Aigina, Athens and Orhomenos. Its magnificent statues were stolen over time.

Founded in 1720 by the Archbishop of Athens, this monastery is built on a picturesque slope of pine forest, 4 kilometers east of Poros Town.

Take a short boat trip to the coast of the Peloponnese and land in the town of Galatas where a lush hill is filled with more than 30,000 lemon and orange trees. Enjoy view from the hilltop toward the island.

Askeli is long and sandy beach lined with hotels and bars in a nice residential district of the island. Another sandy beach is Megalo Neorio which is bordered by picturesque pine trees.  Love Bay is also surrounded by pine trees which offer natural shade. 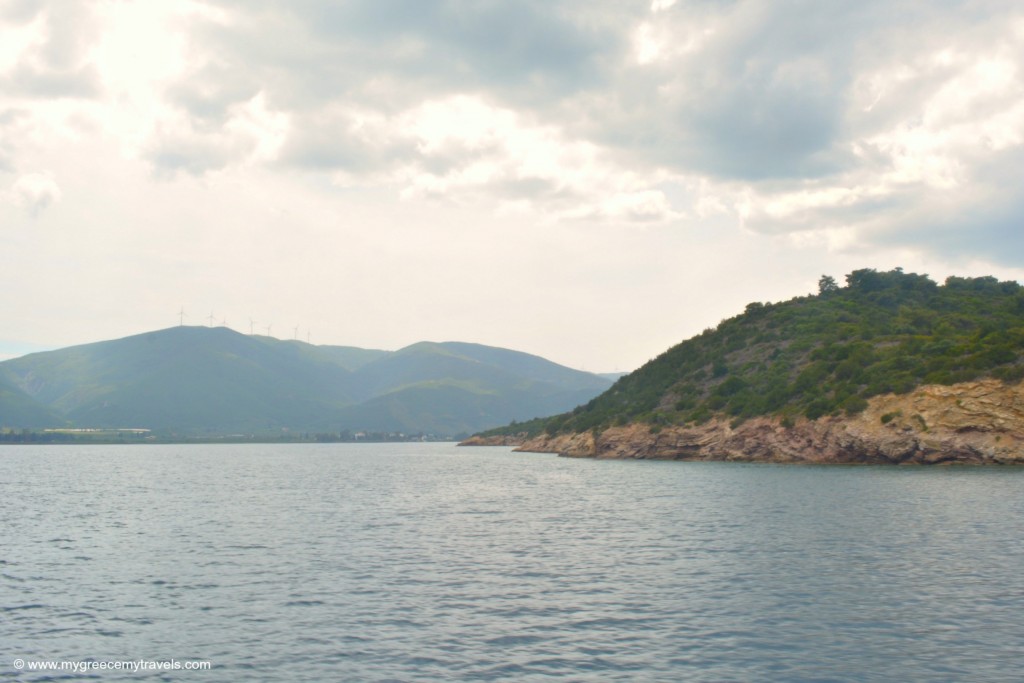 Admire the views in Poros 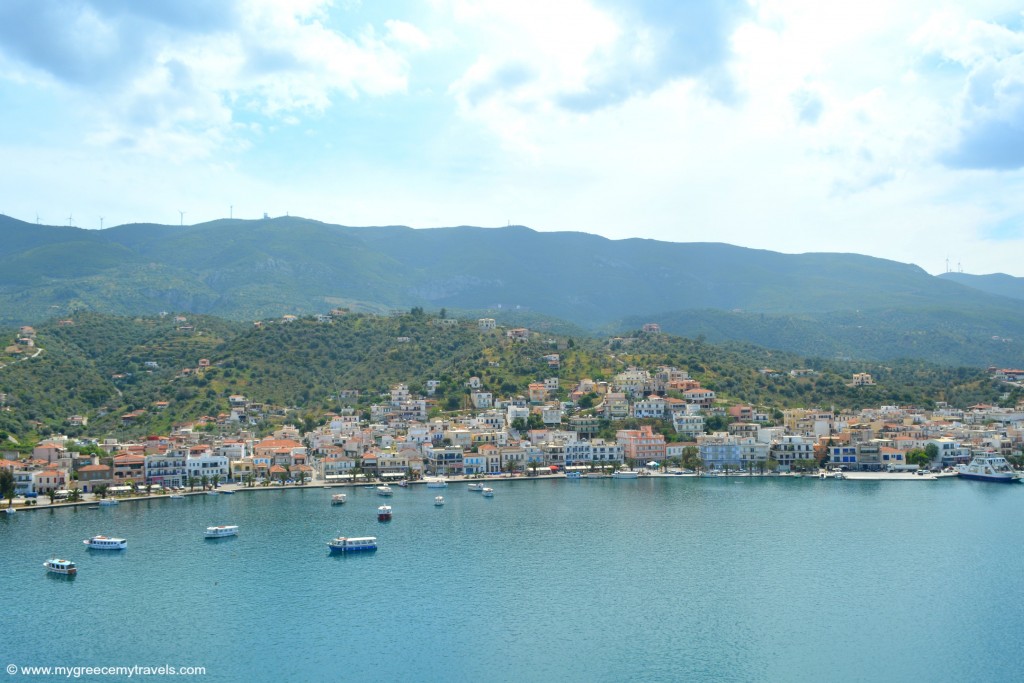 View from Poros to Peloponnese.

During my stop in Poros, we basically just had time for a long leisurely walk up to the clock tower and around the harbor. As you see, we were rewarded with great views. Other than that, we had a quick snack and coffee by the water before we headed back onto the small cruise ship.

For more information about day cruises from Athens check out the Olympic Cruises website here. You do get a quick “snippet” of the Saronic islands. Individual adult tickets for the three island day cruise start at € 50 per person. It includes a buffet lunch.

Have you visited this island? What did you see?