This traditional Greek island wedding on Serifos was a big deal. Imagine, the whole island was invited. A total of one thousand guests! The mayor of Serifos Antonis Antonakis married his fiance Lia. She happens to be the daughter of the island’s priest. As the hour of the wedding drew closer all of those guests waited for  bride and groom to walk up to the square where the church was located. 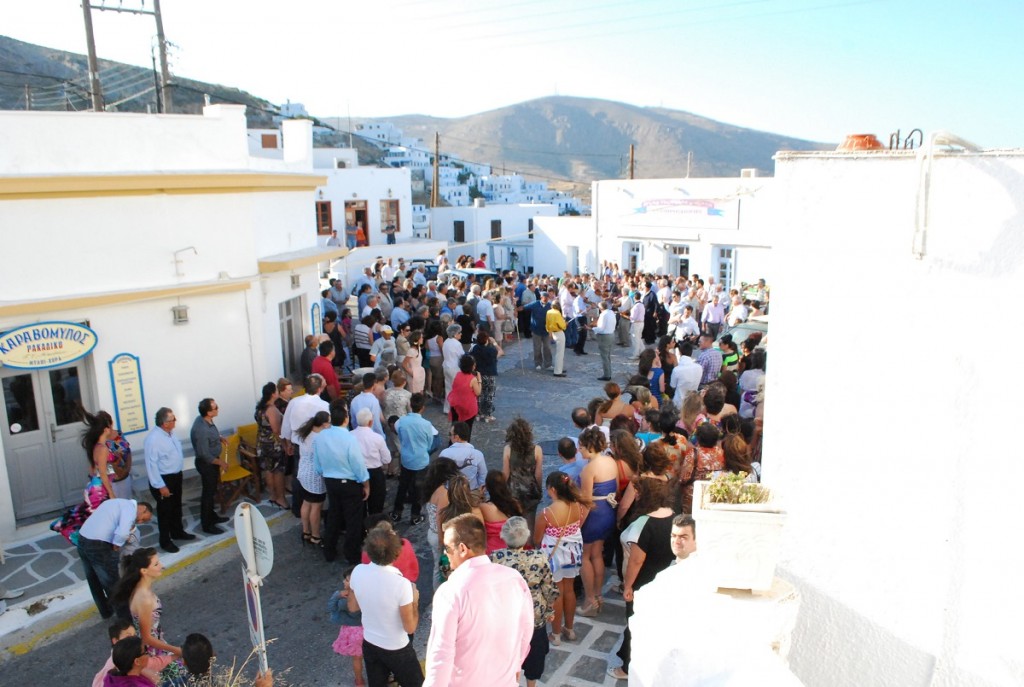 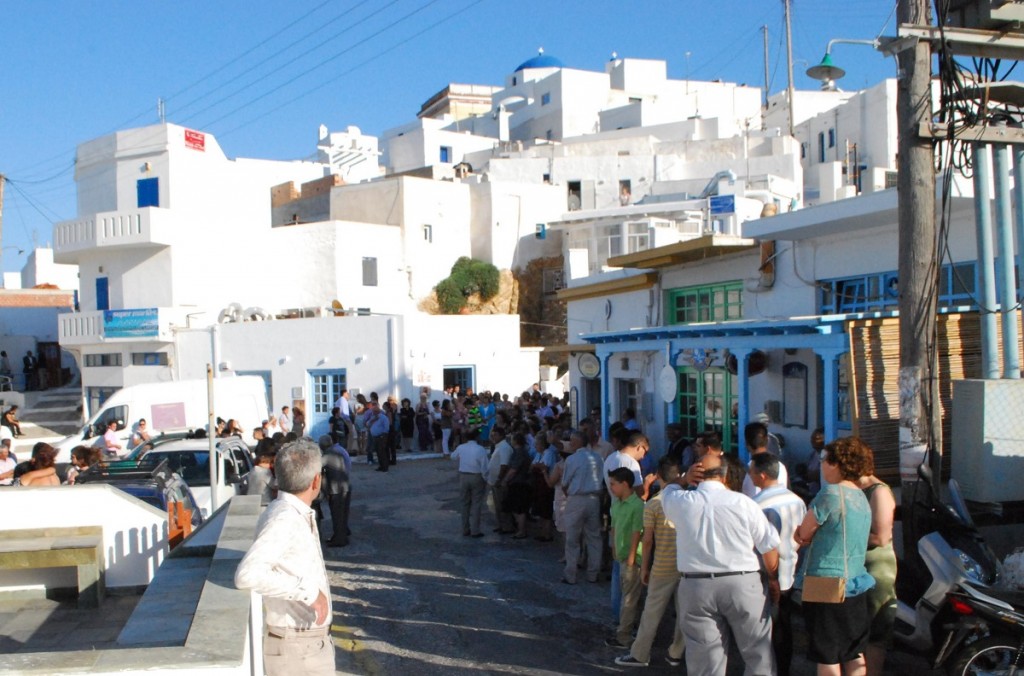 It was an honor for us to be at the wedding.  I’ll rephrase that a bit, a very windy wedding!  Exactly when the wedding was happening and the entourage made their way up the steps of the hilltop whitewashed village, the crazy Cycladic winds started whipping around. These island winds, called meltemi, hit. They reached a Balfour rating of eight that day. Trust me, that was a very strong rating!

Facing the winds, local musicians started off  the beginning of the ceremony  by walking and playing traditional Greek island wedding music. The couple followed. 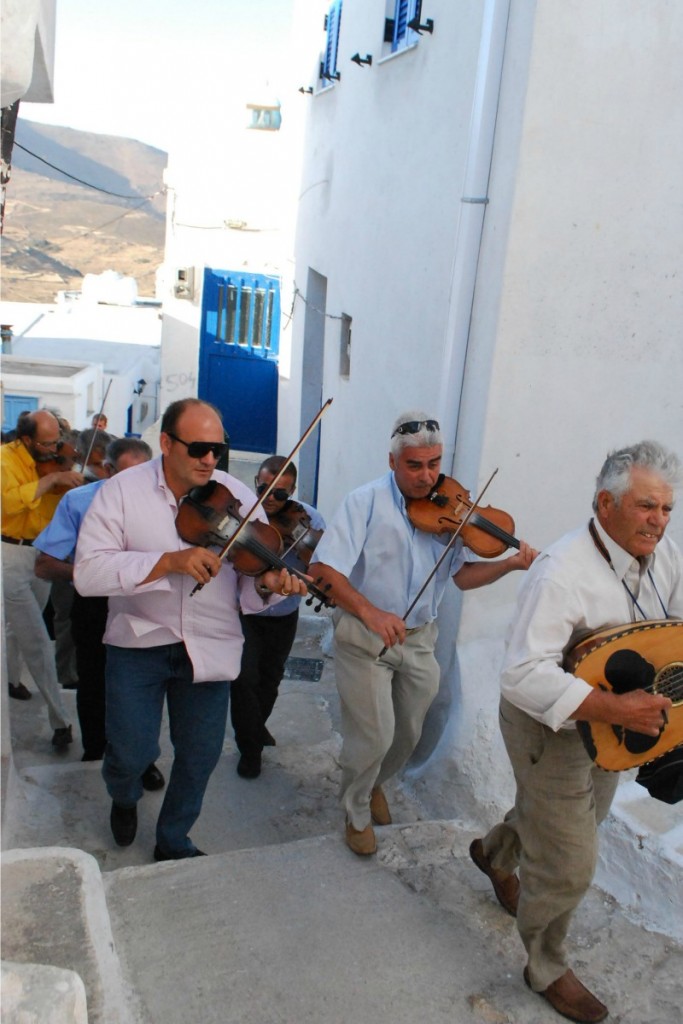 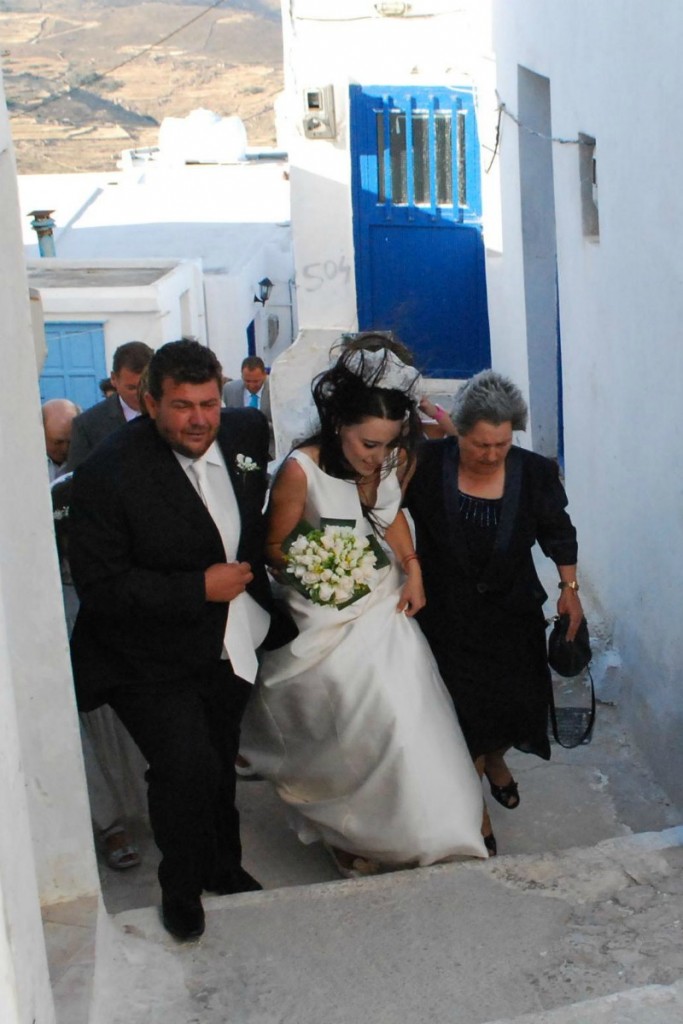 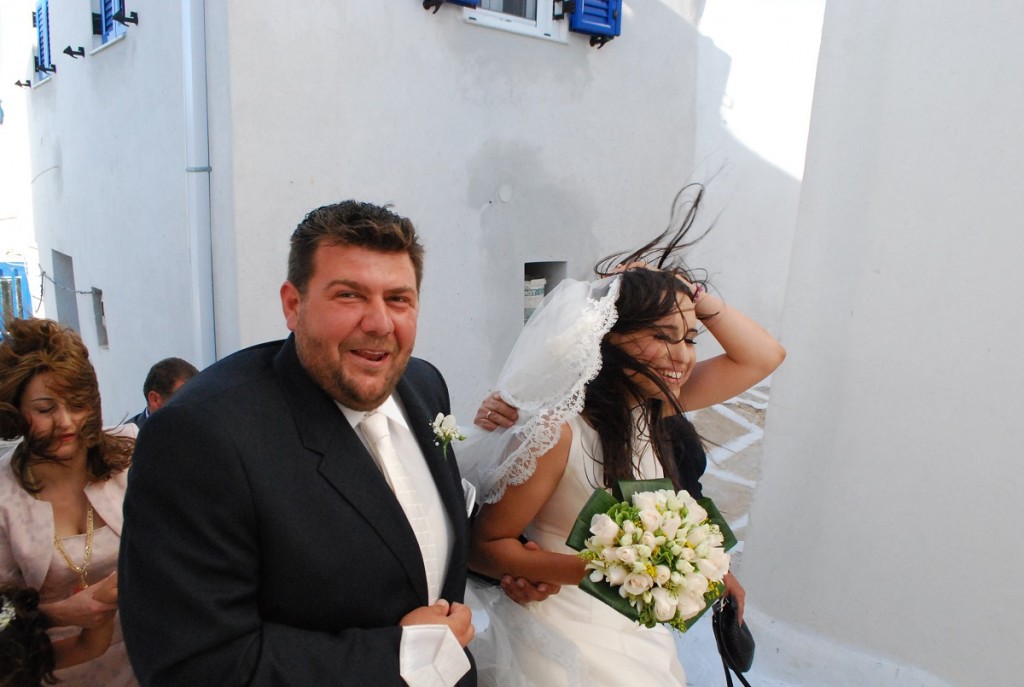 Followed by so many guests.  A look inside the packed church. 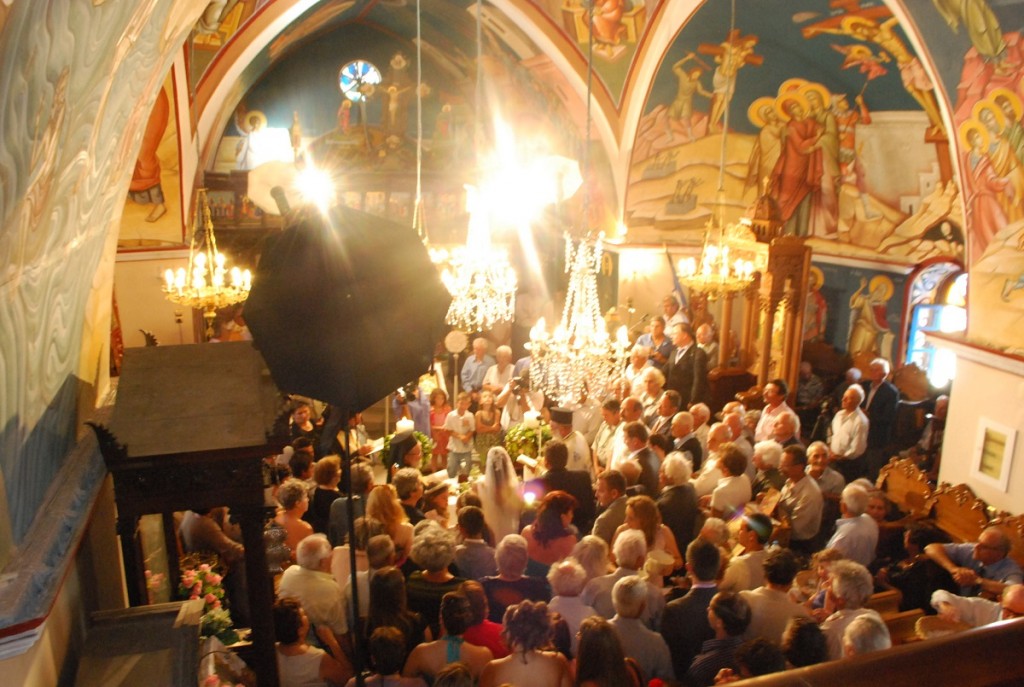 Afterwards, the entire island pretty much gathered at one party held at an open-air restaurant space near one of the beaches.  Na zisete!

About those Traditional Greek Island Weddings

Should you be invited to a traditional Greek island wedding, here are a few lists that should come in handy. 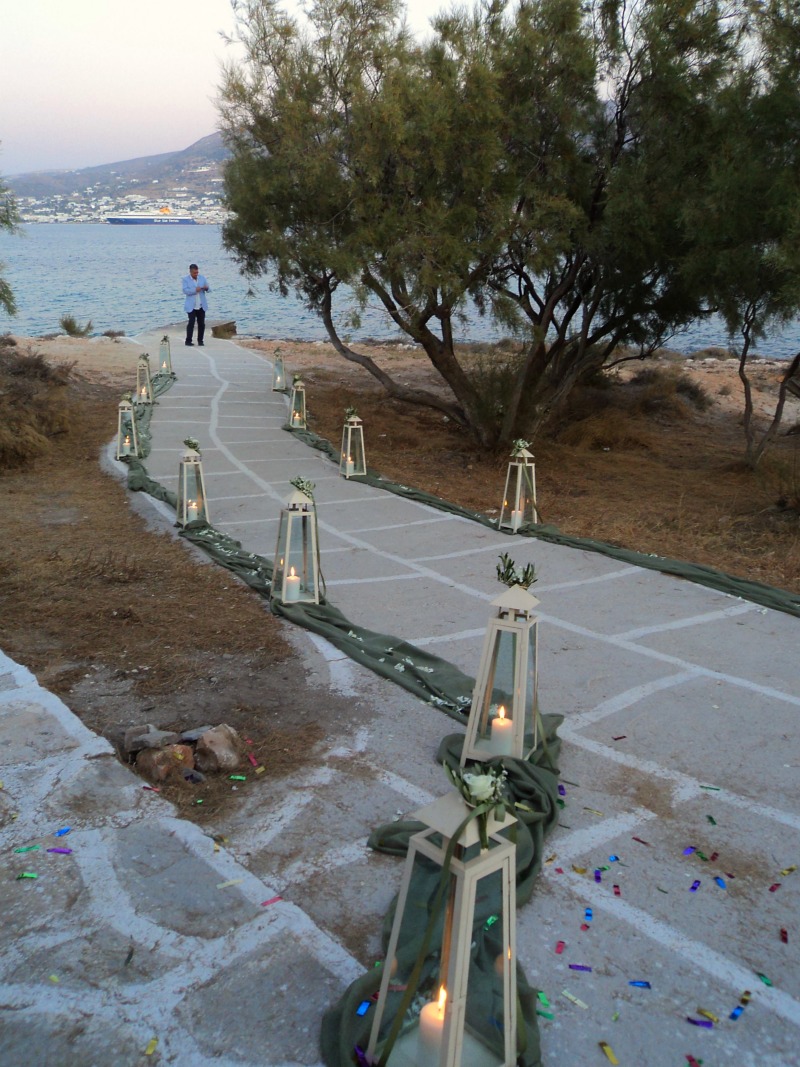 Before You Attend a Greek Island Wedding Know… 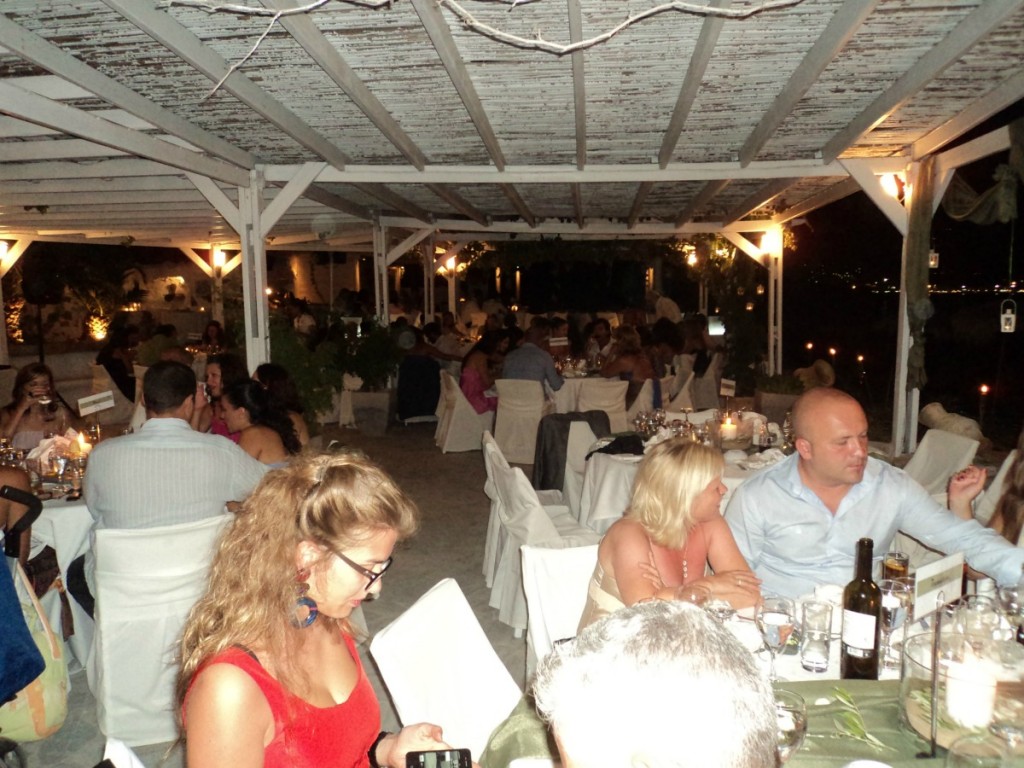 What to Wear to a Greek Island Wedding

My advice to ladies: bring a pair of comfortable shoes or pretty flat sandals. The little chapels on islands are often challenging to get to by foot. Plus, you’ll likely want to switch to comfy shoes to dance in later on. Comfortable dresses that are long, flowy (watch out for the island winds) are a great option for women.  Also, take a scarf in case it gets chilly at night. Suits for men.

How to Get to Serifos

The only way to travel to Serifos is by ferry or private boat/yacht from the port of Piraeus in Athens. The island does not have an airport.

The frequency of ferries depends on the season. Ferries leave from the port of Piraeus in Athens.  The trip lasts anywhere from 2.5 to 5.5 hours, depending on if you book a seat on a fast or slow ferry. For updated ferry schedules check www.openseas.gr.  I usually take the SpeedRunner which is about a 2.5 hour journey (45-50 Euro each way).

There are regular connections to the other west Cyclades, including Milos, Kythnos and Sifnos.

Where to Stay in Serifos

Boutique: Rizes Hotel is a four-star hotel with a beautiful pool, individual plunge pools, a great view, excellent buffet breakfast and a beautiful view to the Chora and the Aegean Sea. From €100 a night, depending on the season.  Coco-Mat, the luxury Greek brand, also has a small boutique hotel right on Vagia beach.

Mid-Range: The Livadi is ideal for a convenient stay, especially for those without a car. You’d be within walking distance to everything: beaches, eateries, nightlife and the ferries. For an atmospheric apartment stay with lovely amenities, I recommend Indigo. From €80 a night, depending on the season.

Where to Eat on Serifos

For a rundown of the eateries in Serifos, check out my post the Best Restaurants in Serifos.

What to Do on Serifos

Serifos is a nature lovers dream.  There are many beautiful beaches, hiking trails and a fantastic main town to explore. I frequent this island the most so I have tons of posts about everything Serifos on this blog.

Have you ever been to a traditional Greek island wedding?