Arts and Culture Athens Top Things to Do Travel GreeceMarch 11, 2016

The Greek Mythology Tour of Athens gave an alternative perspective to the ancient monuments of the Greek capital.  It was full of mythical storytelling that made me think, laugh and wonder!

Before the Greek Mythology Tour…

Οne way I continue to improve my Greek is by reading Greek.  My favorite book?  It’s Greek mythology! For kids, by the way. I’m not that advanced. 😉  Here’s the cover of one from my Greek bookshelf with great illustrations and of course, fantastic stories.  It is called Greek Myths for Young Children

by Heather Amery with illustrations by Linda Edwards.

Growing up in New York, I still remember how fun it was to learn about Greek mythology. Who doesn’t love a good story?!

Greek Myths for Young Children with illustrations by Linda Edwards

Now that I’m “grown up” and have become a writer, a line of work that appreciates great dramatic plots and twists, I see Greek myths in a whole new light. Reading them in Greek is pretty neat too. No matter what language you love your mythology,  the Alternative Athens tour combined those famous tales with the actual places  associated with them. 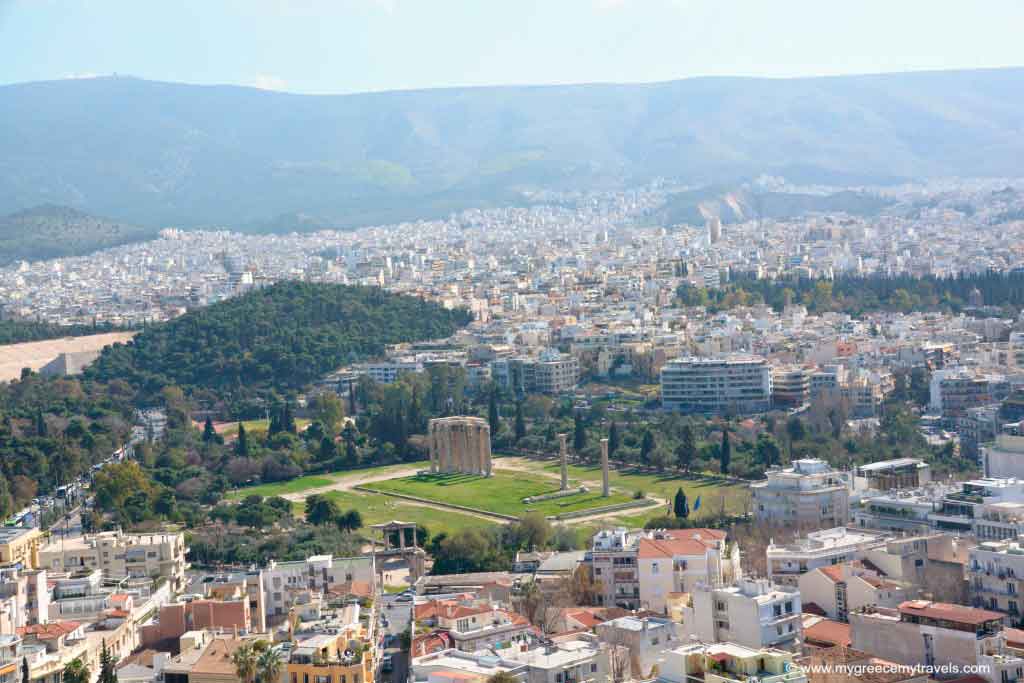 The Temple of Olympian Zeus

I attended the Mythological Athens tour with fellow Travel Bloggers Greece members. Ioanna, our guide, met us at the Temple of Olympian Zeus which is located right in the heart of the capital.

Impressive columns from the temple remain. It was obviously quite grand in its heyday.  The site dates back to the 6th century B.C and was completed later by a Roman emperor named Hadrian by the 2nd century A.D.   There, Ioanna told us the stories associated with the mythological “beginning” of Athens. 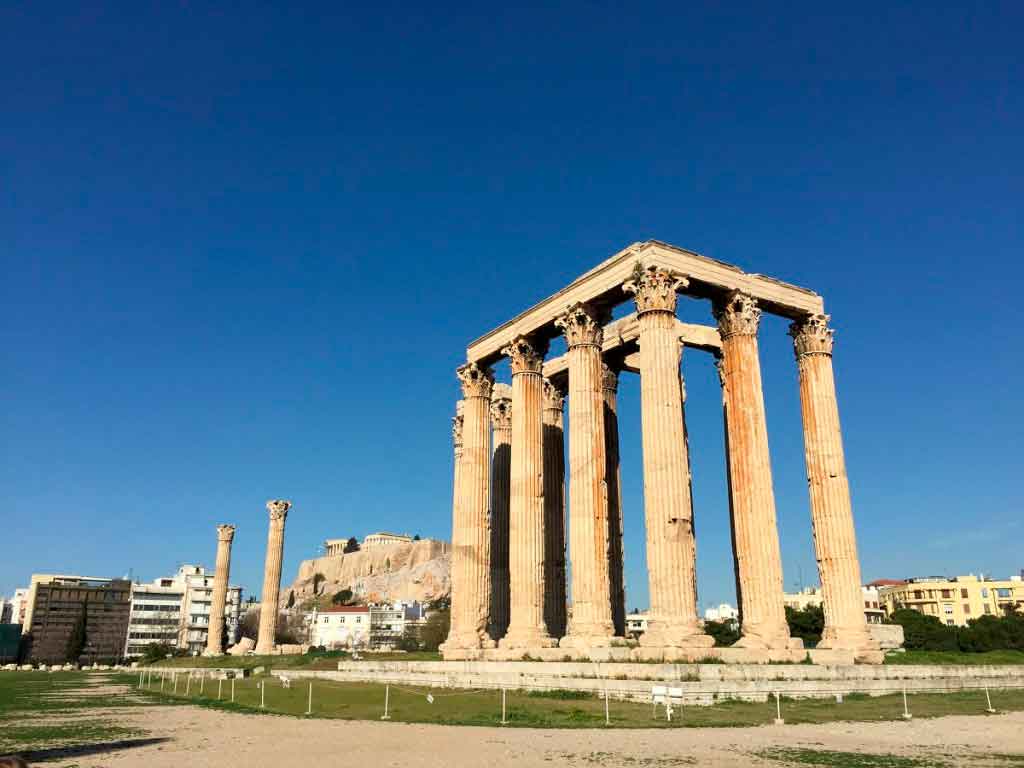 Next, the tour group took a seat at the Ancient Theatre of Dionysus  on the slopes of the Acropolis of Athens for a great story of how the Greek god was born. It involved an affair with a mortal, a deadly revelation and baby Dionysus finally coming into the world out of Zeus’ thigh!

Dionysus went on to become the fun Greek god of well, good times, and wine and fertility.  We learned about the ancient theater — the oldest in the world –and the celebrations and shows that gathered a crowd of up to 15,000 spectators. 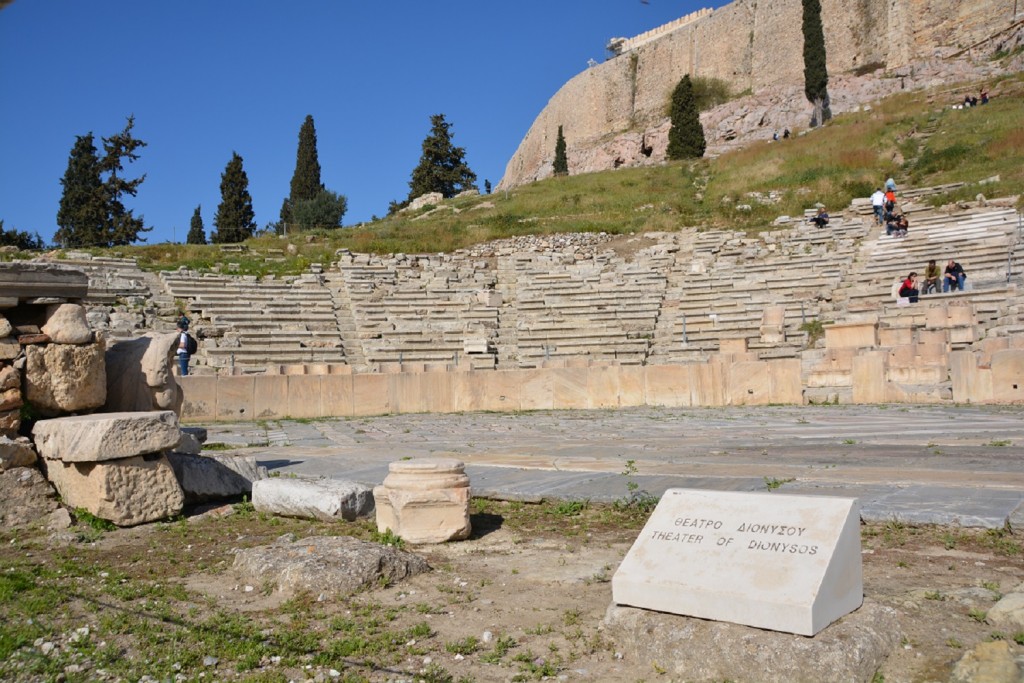 We turned a corner and climbed up the Acropolis of Athens next.  I have been several times over the years but never with a guide. Ioanna not only told us the history of each monument or former temple, she also delved into the myths behind them including why Athens was named after the goddess Athena.  A very cool story indeed! 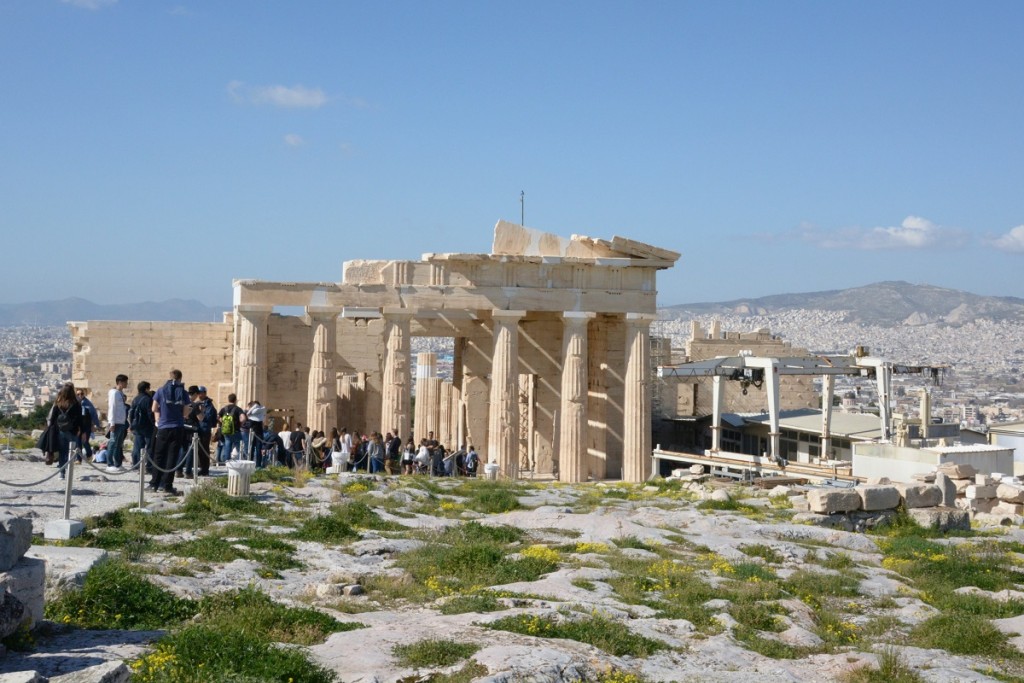 At the Acropolis on a sunny winter day with Alternative Athens 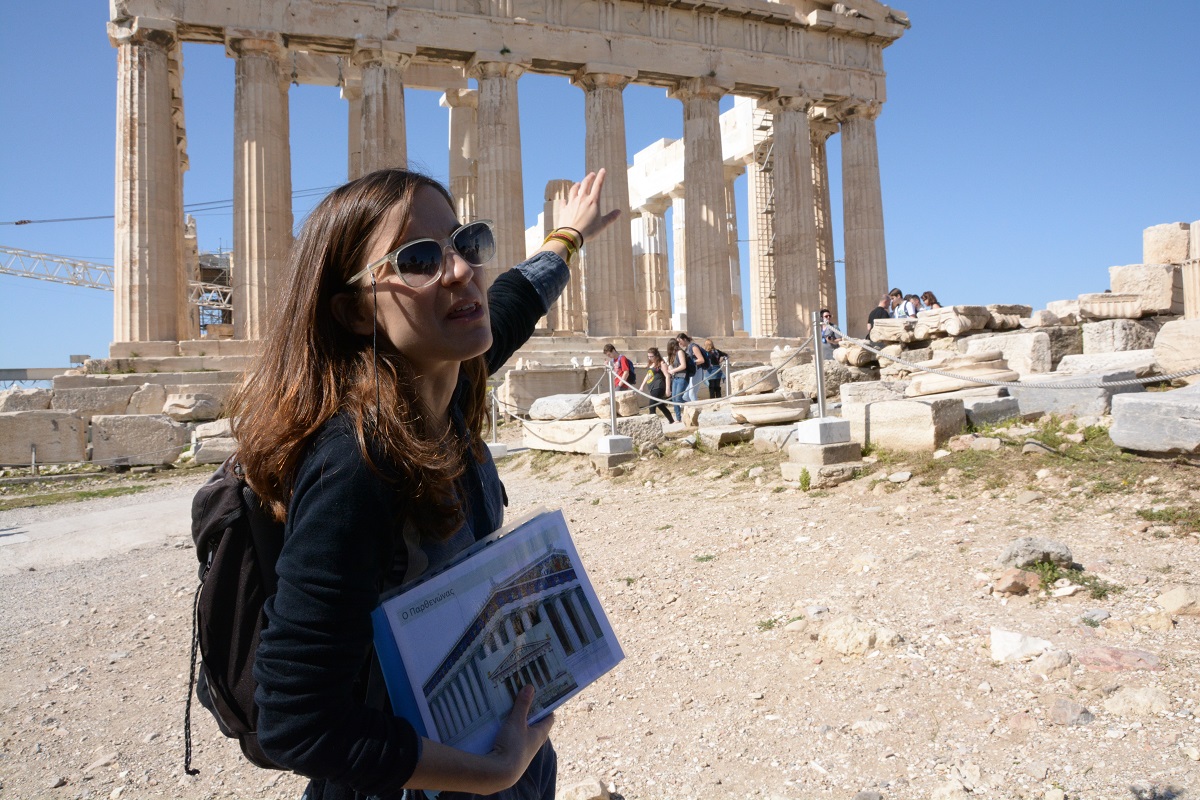 Ioanna tells us more stories and history on the tour. 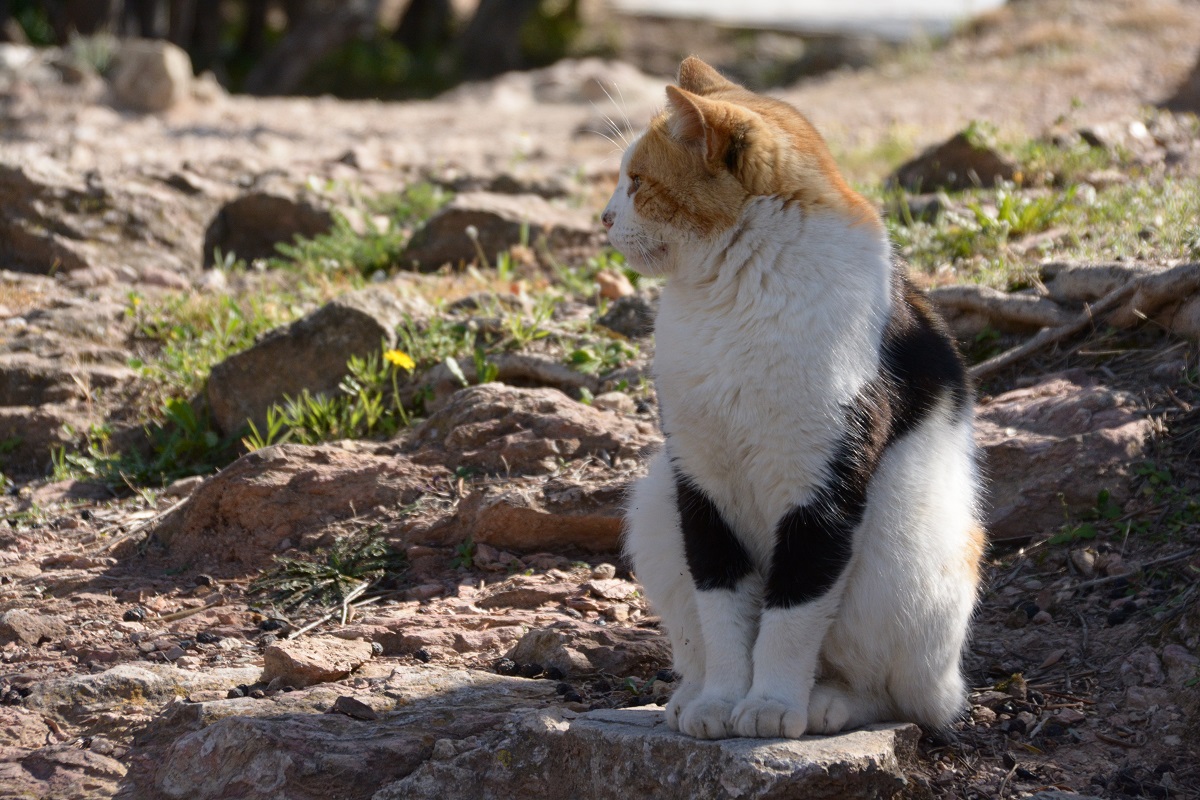 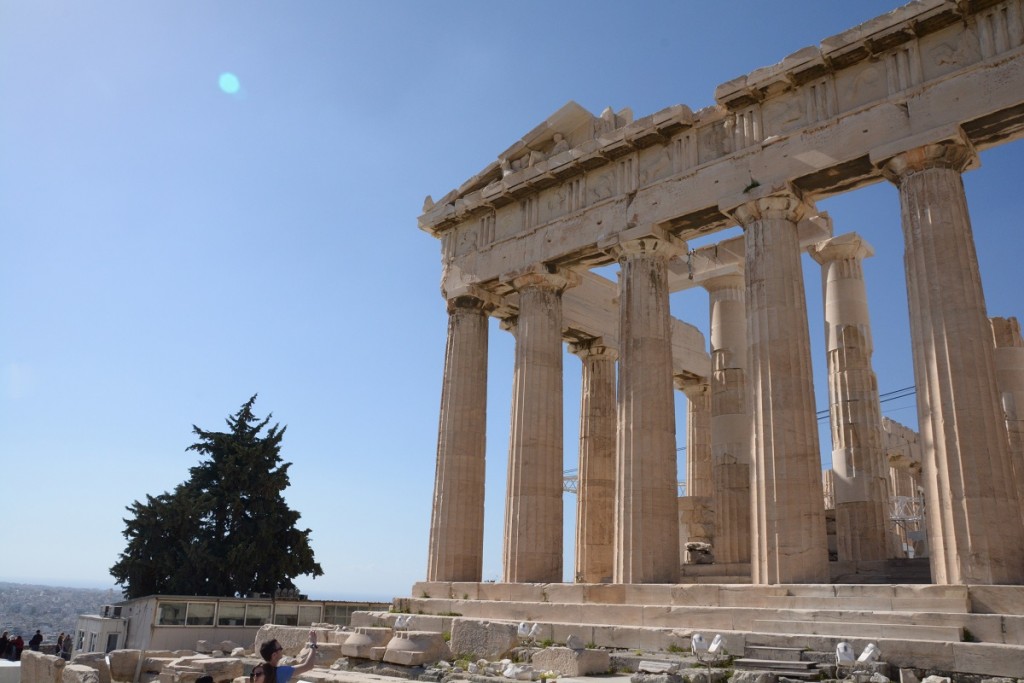 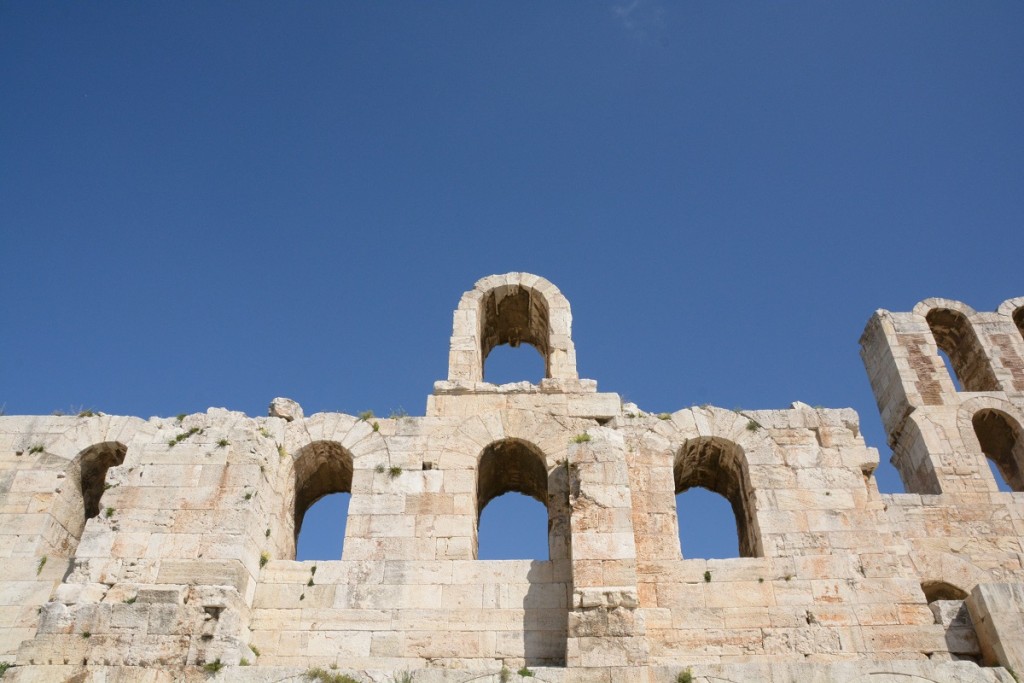 The Odeon of Herodes Atticus on the slopes of the Acropolis of Athens. 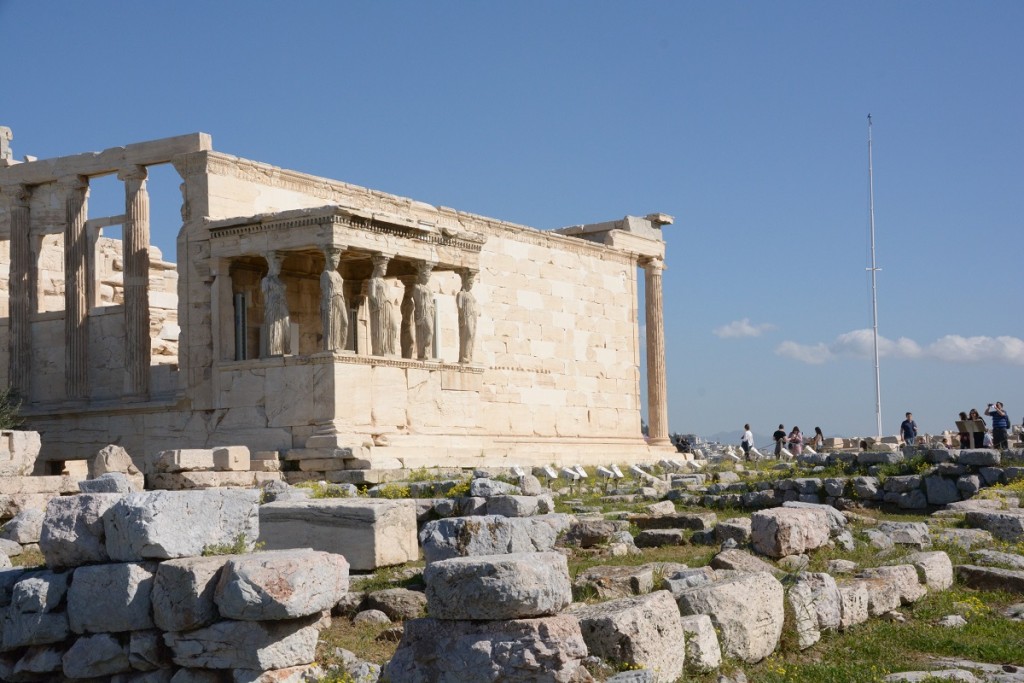 The beauty of the Erectheion temple 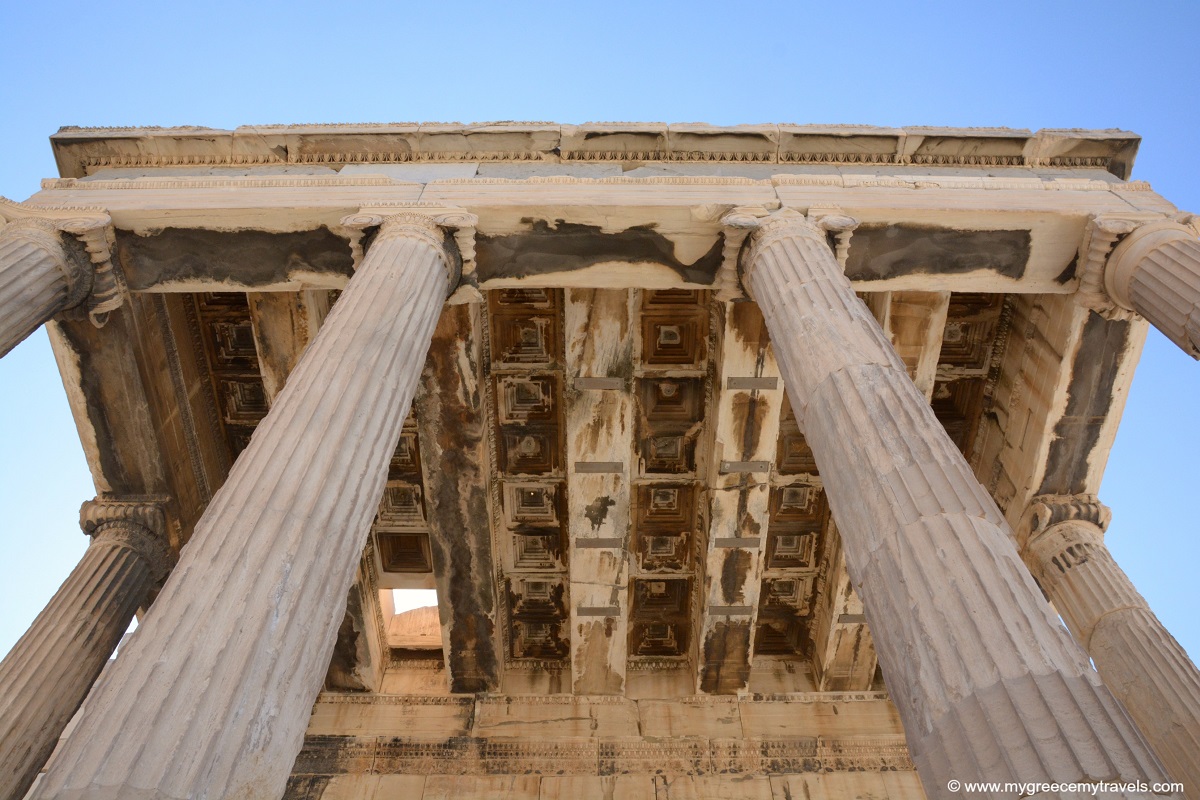 Where did the trident strike

After a well-deserved coffee break in beautiful Plaka neighborhood (another must-do when you visit Athens) we headed to the Ancient Agora.  Ioanna told us some of the best Greek mythology stories yet including how the incredibly ugly god named Hephestus ended up marrying the beautiful goddess Aphrodite.  The tour ended at the Ancient Cemetery of Keramikos for more stories about the lives of Greek gods. 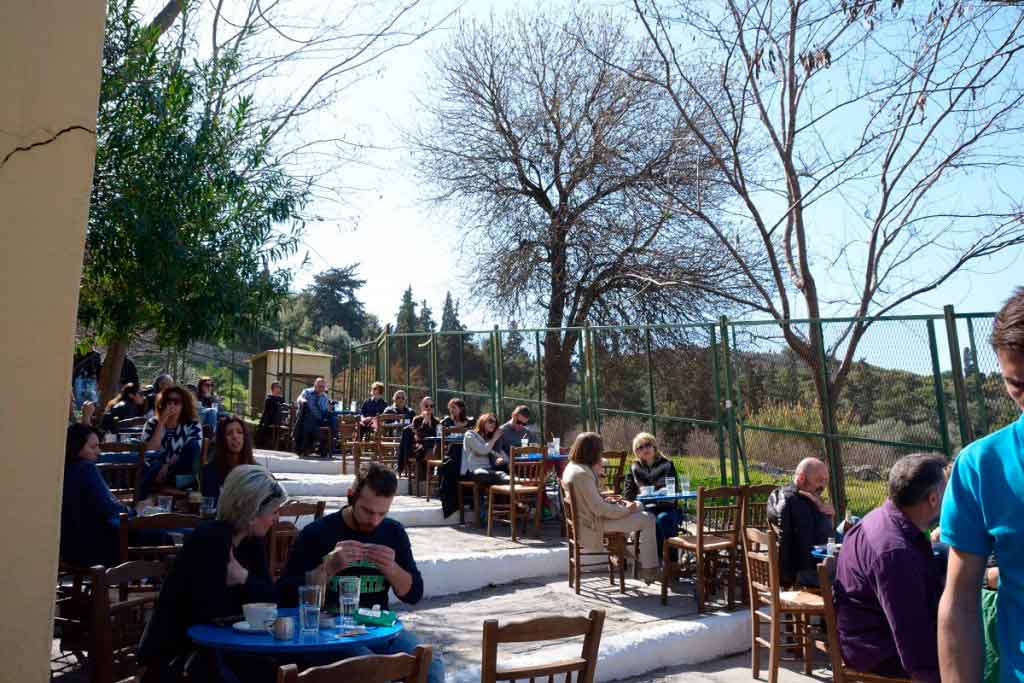 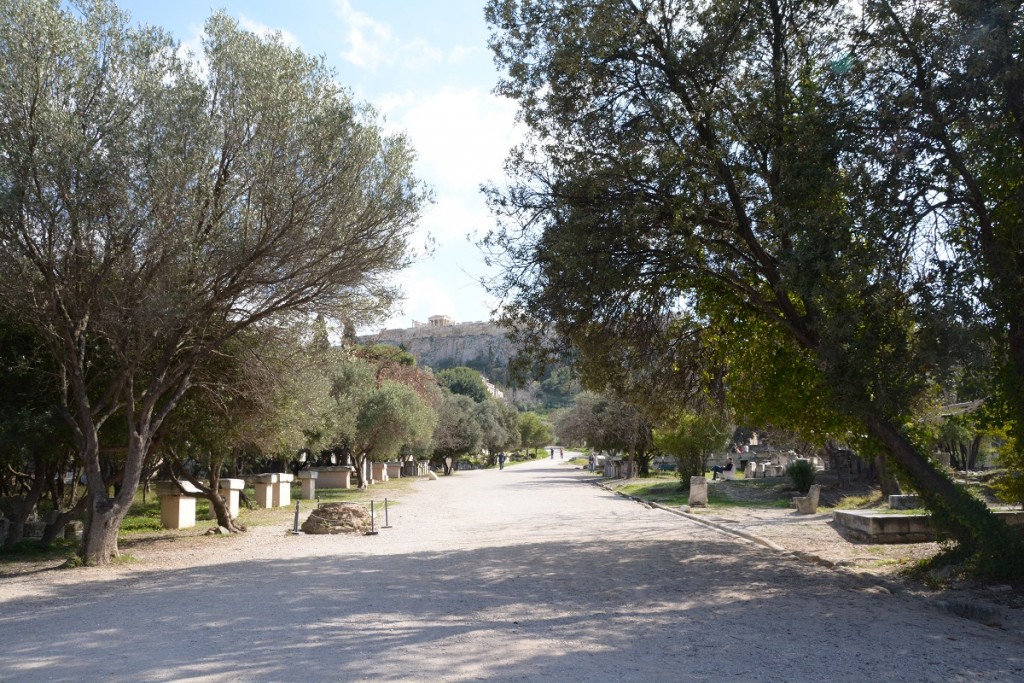 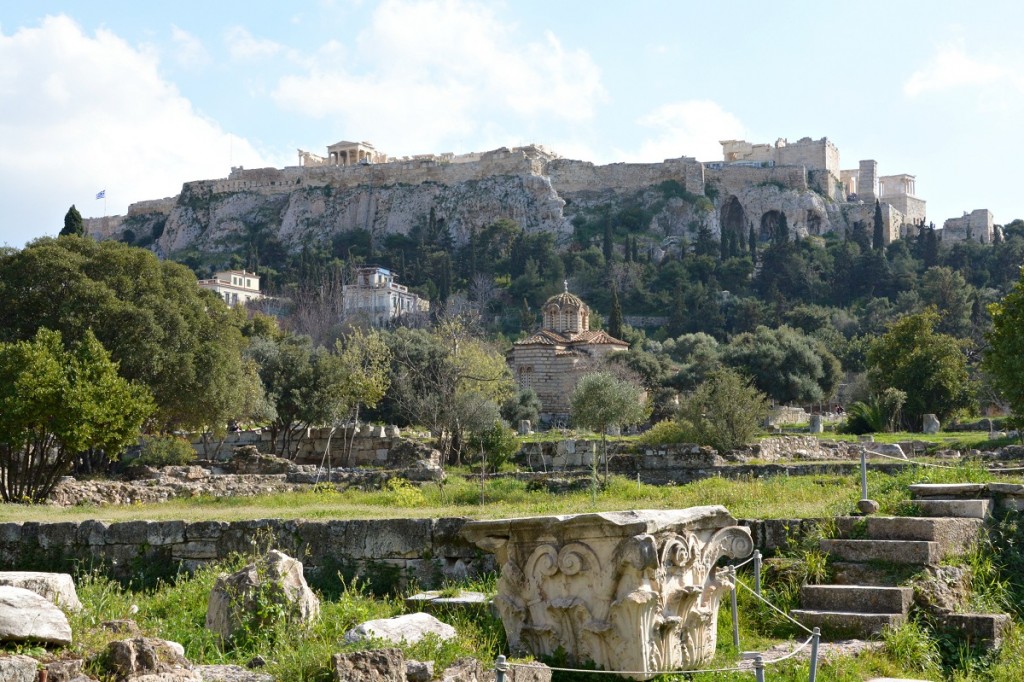 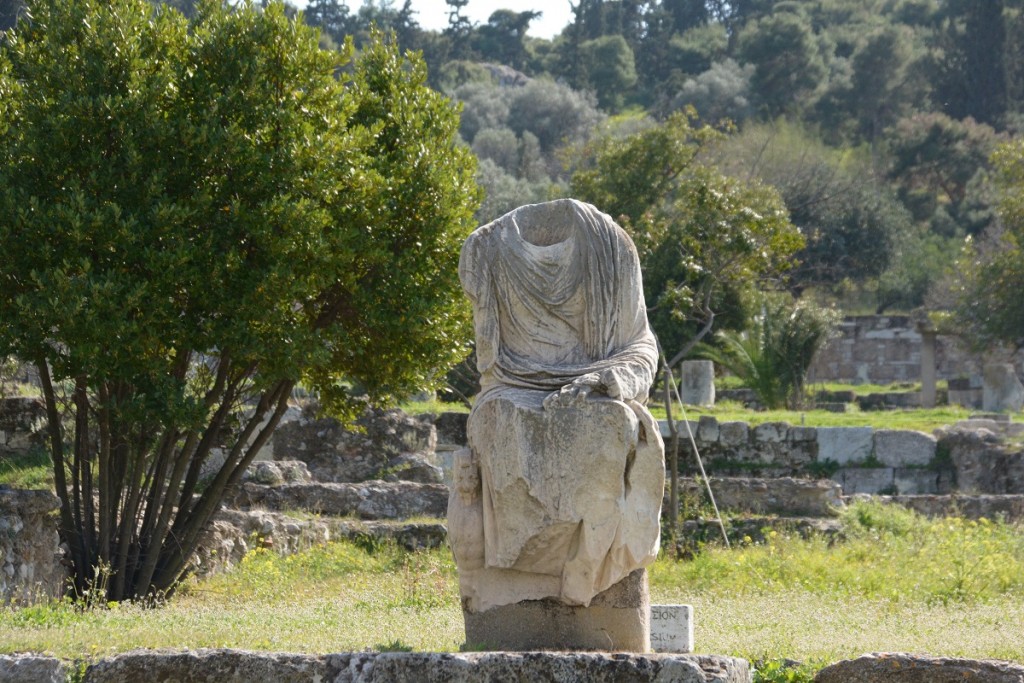 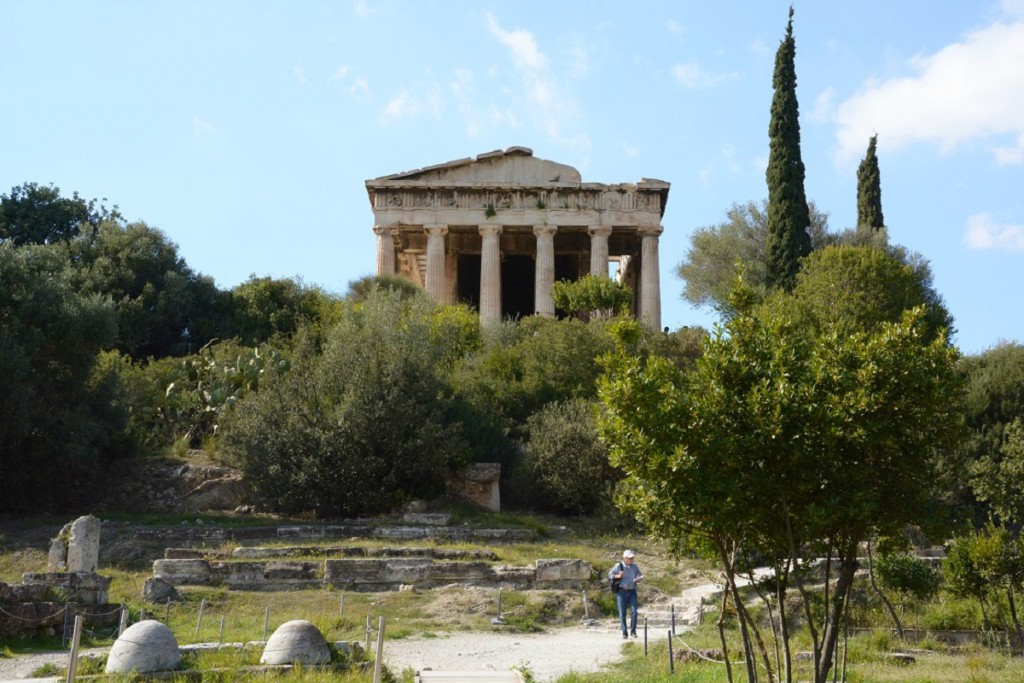 Thiseon or the Temple of Hephaestus 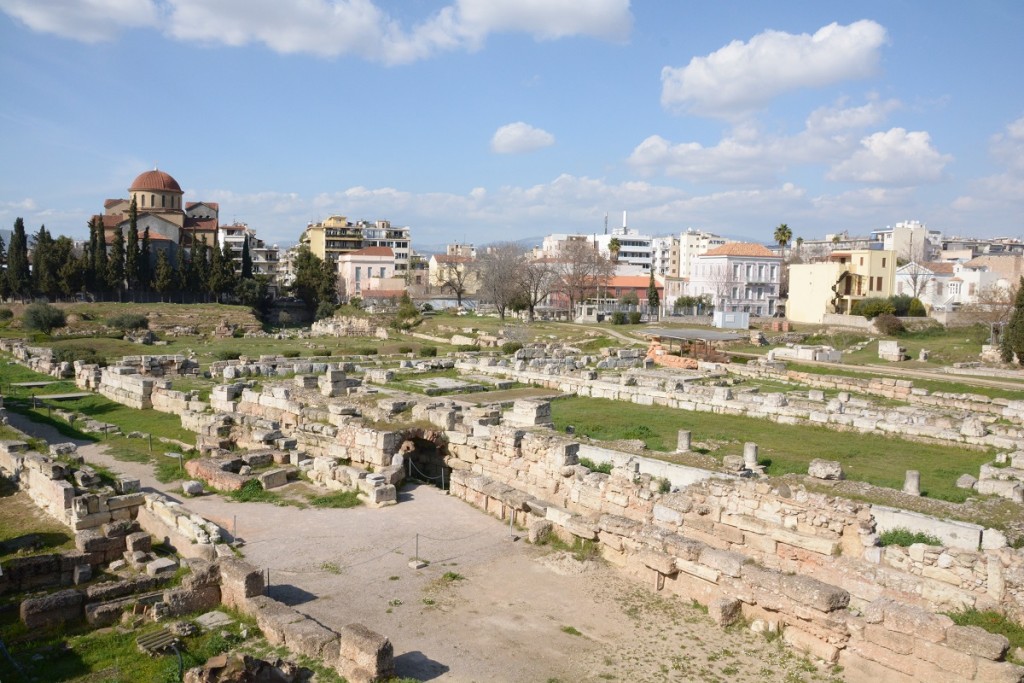 I loved gaining a different perspective of all of the city’s most important archaeological sites: Temple of Zeus, Acropolis, Ancient Agora and Keramikos Cemetary.

Not only do you hear those great Greek myths, you learn what you would on any sightseeing tour about the history of each monument or site. Ioanna gave insight into ancient Greek society and how it functioned as a great city that founded concepts like democracy.

A big plus was the opportunity for the great pictures. The tour stops at the historic sites that offer some of the most panoramic views of Athens. 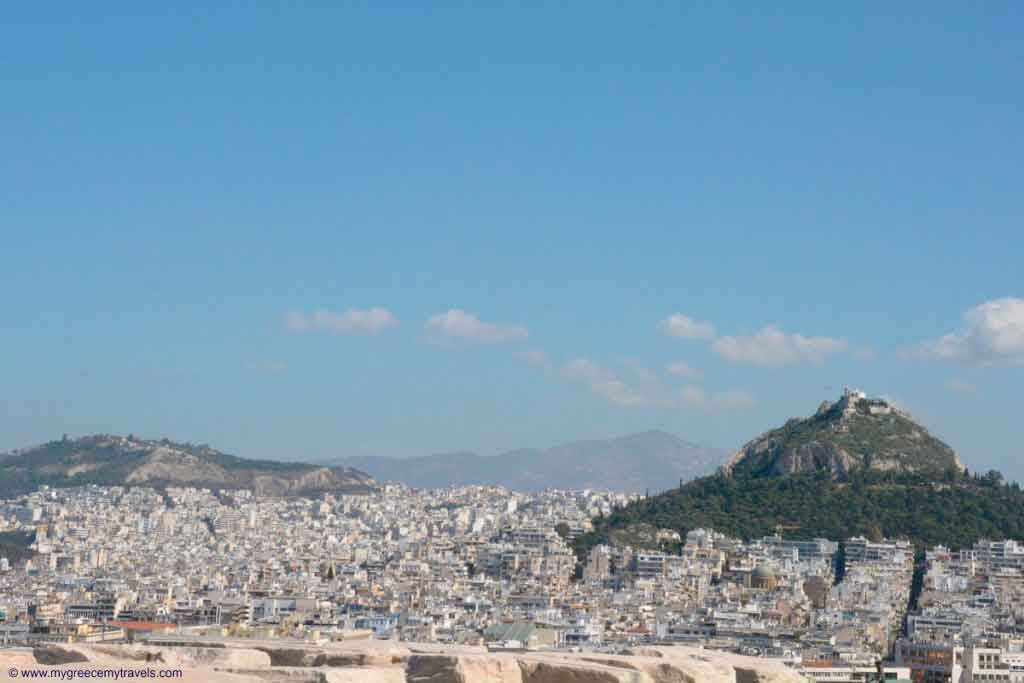 *Members of Travel Bloggers Greece were invited by Alternative Athens.  As always, all opinions are my own.

Do you like Greek mythology?   Have you ever been on a mythology tour of some sort? 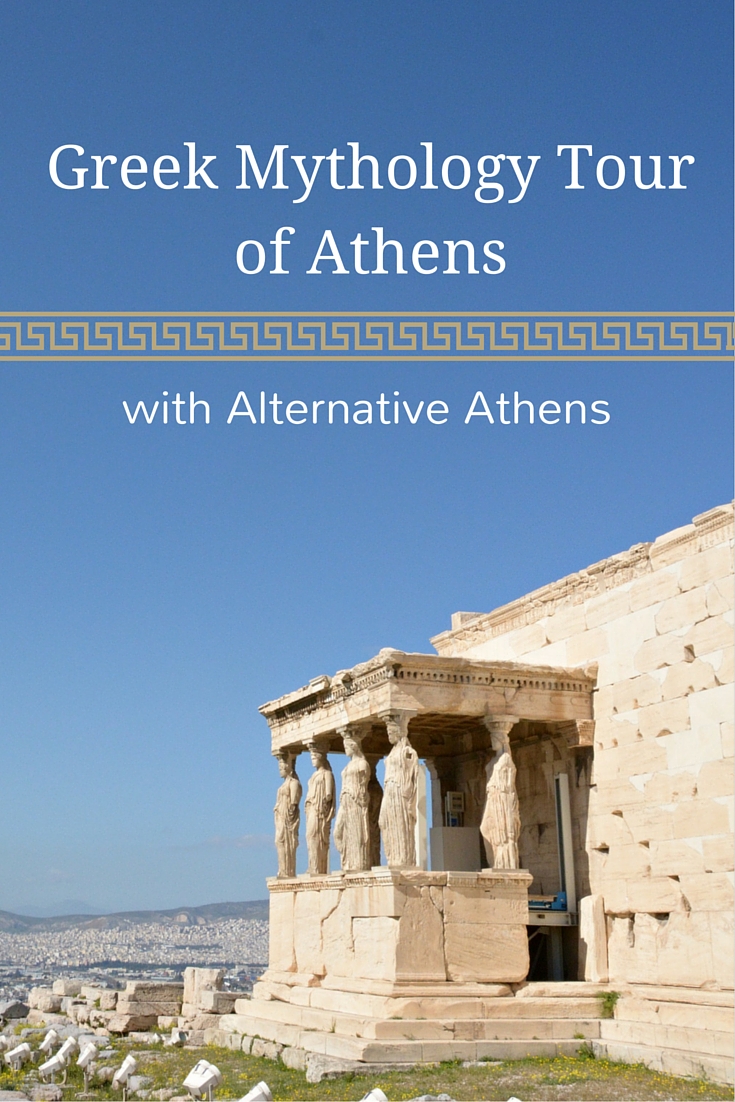