Discover the Lighthouses of Greece

Who doesn’t love the romance of a lighthouse shrouded in mist as it stands guard on a rocky cliff? The lighthouses of Greece have illuminated and safety guided thousands of captains and their crew on treacherous seas.

The lighthouses have been a beacon of light and hope to beleaguered sailors at sea, and today it is actually a sad state of affairs that many of these lighthouses stand empty and unused – silent testimony to their amazing roles in bygone days.

The good news is that The lighthouse network of Greece has 120 traditional lighthouses that are about 200 years of age, some of which are in tip-top condition.

If you love everything about lighthouses and what they represent, you want to be in Greece during August, one of the most popular months to be visiting.

This is because August 18 has been set aside as International Lighthouse Day, when certain lighthouses in Greece are open to the public to reflect on the spirit of the international friendship of seafaring.

This is an annual event and the special day is part of the International Lighthouse and Lightship Weekend which promotes awareness of lighthouses around the world and their need to be preserved.

A trip to one of these Greek lighthouses at this particular time promises to be utterly enthralling as you will get to hear fascinating stories of how these lighthouses have played their part in maritime safety. You’ll also get to hear of the actual role and lives of lighthouse keepers and their important roles in contributing to the cultural heritage of Greece. 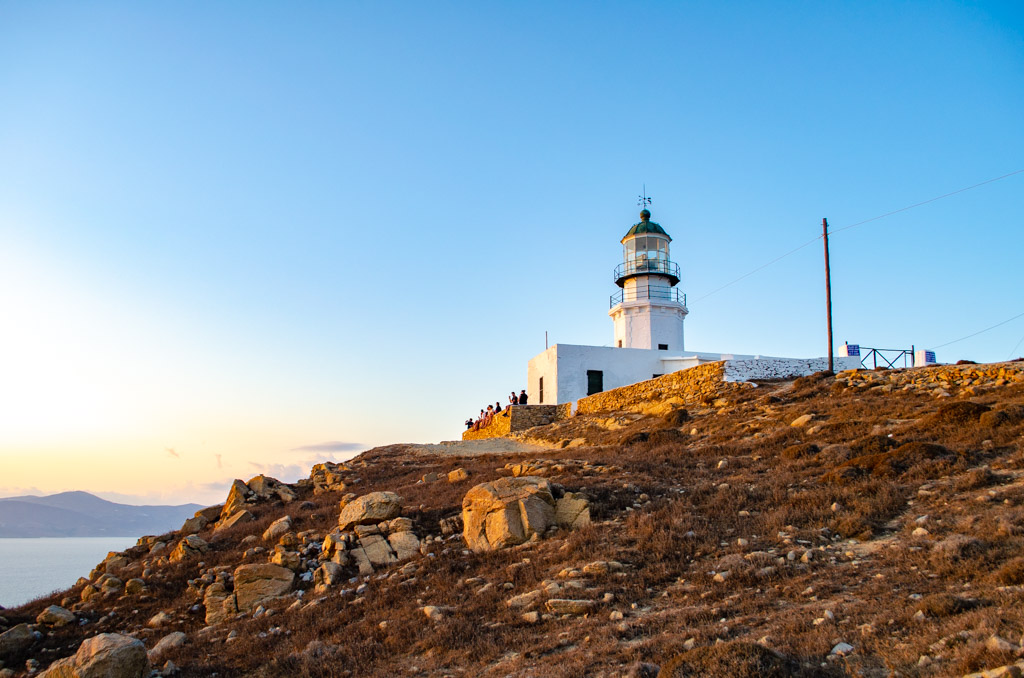 Built in 1891, the 19m tall Armenistis Lighthouse came about after the sinking of British steamship Volta in 1887, when 11 people lost their lives. It is one of the few lighthouses still in operation.

It is found on the north-western part of the island, offering splendid views. The mechanism used to provide the light was designed by Sauter Lemonier, a French company who received an award for the mechanism. In 1983 the lighthouse was electrified. The original lighting equipment can be seen at the Aegean Maritime Museum in Mykonos. 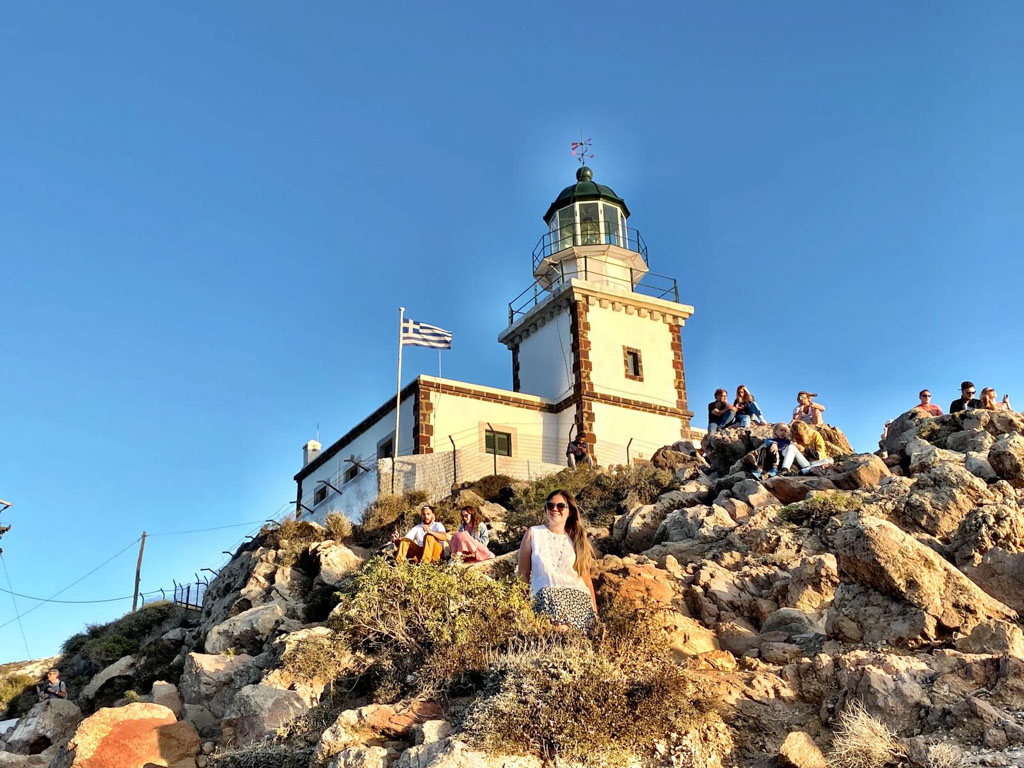 Built in 1892, this 19th-century lighthouse in the village of Akrotiri is accessible by road from the village. It is 18 kilometers from Santorini and is believed to be one of the most beautiful lighthouses in the Cyclades. It is magnificently situated on a high cliff right above the sea. The tower above the lighthouse keeper’s house is 10 meters high.

In Paros, Antiparos and surrounding islets there are about 17 automatic beacons. One of these is in Agios Fokas and the other is the lighthouse of Korakas in Naoussa, with a focal height of 60 meters and a luminescence range of 14 nautical miles.

The lighthouse of Lefkada 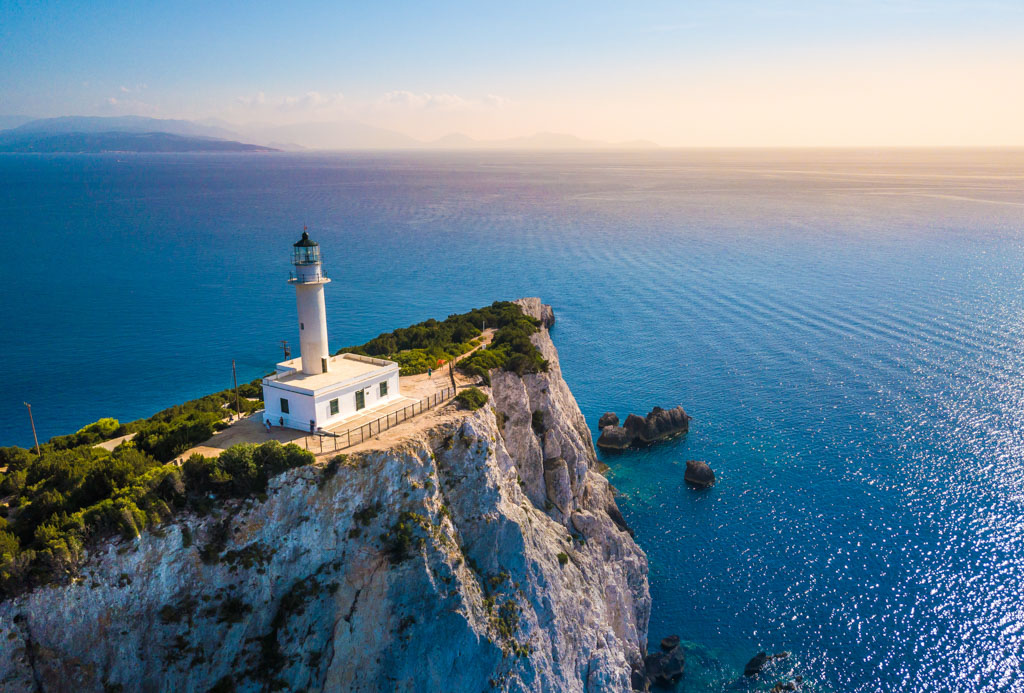 This lighthouse was built in 1890, and with its focal height of 70 meters, it perches magnificently on the top of tall white rocky cliffs. It has kept guard over the untamed Ionian Sea island, and legend has it that the lighthouse has witnessed many couples jumping to their deaths into the tumultuous waters below. The views from the lighthouse of Ithaca and Kefalonia are stunning. It is also one of the most popular scuba dive locations for experienced divers. 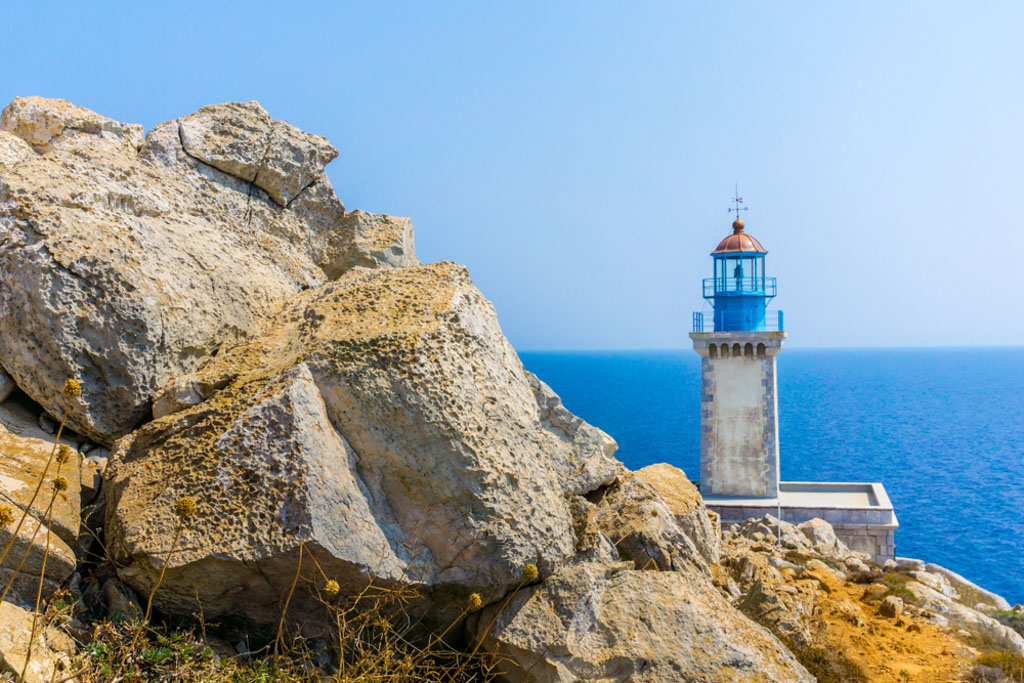 The Cape Tenaro lighthouse on the southern-most point of mainland Europe was constructed in 1882, renovated in 1930 and switched to solar power in 1984. There is a path leading to the lighthouse. The lighthouse recently underwent some renovation by the Ekaterini Laskaridis Foundation, working with the Navy. 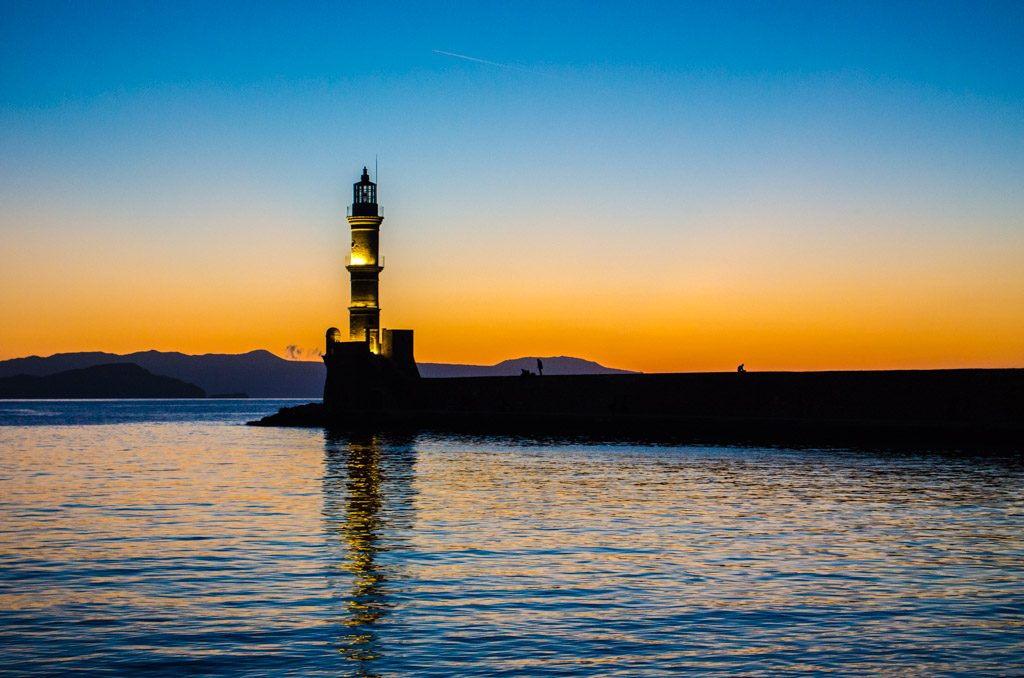 Lighthouses of Greece can be pretty ancient, and this lighthouse is one of the oldest in Greece and the world. It was built between 1595 and 1601 and its most recent restoration was in 2006. Its age makes it a major attraction in the old port of Chania and particularly at night when the lighthouse is lit up. Visitors aren’t permitted to enter the tower. The tower is divided into three parts – the octagonal base, the middle part with its 16 angles and the circular third part. 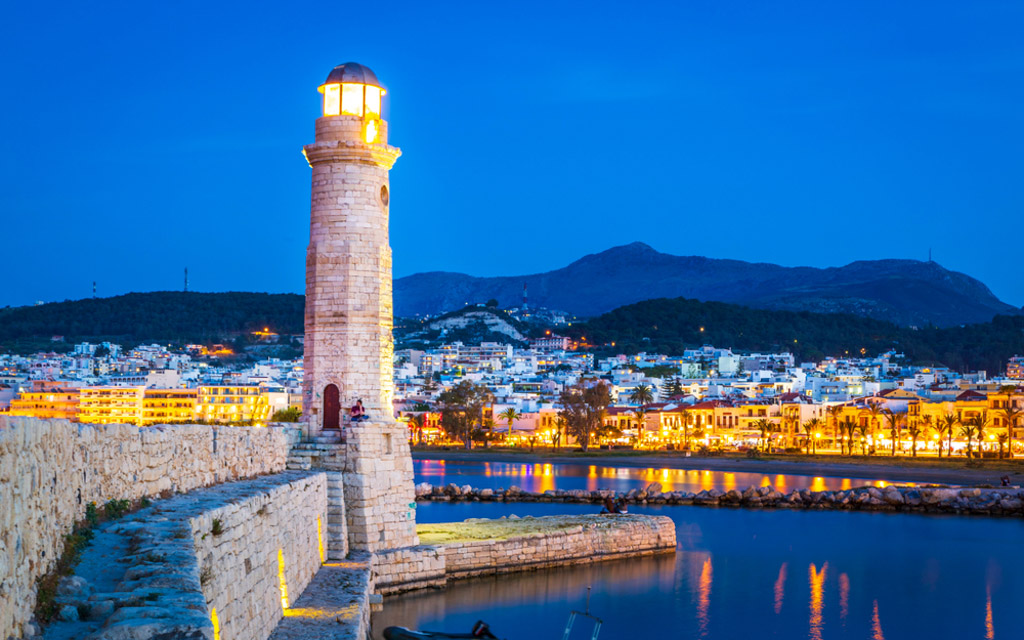 The lighthouse of Rethymno is an important cultural attraction found on the old wharf of the Venetian harbor. Its stone structure is 9m and the focal plane is 49 meters. It was built in the 1830s and is the 2nd largest remaining Egyptian lighthouse in Greece. In 1864, the lighthouse was given to the French Company of Lighthouses. It is no longer in operation. 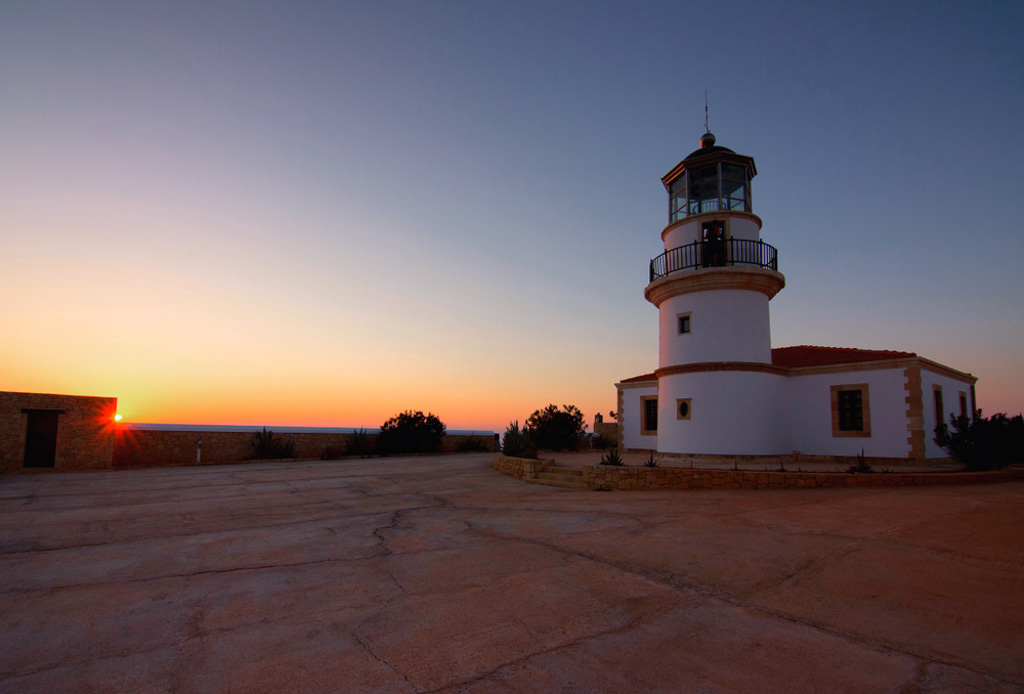 This 9-meter lighthouse was built in 1880 and rebuilt in 2003. The lighthouse is found about 37 kilometers south of Sfakia, Crete. Gavdos is the southernmost Greek island and it is believed that the apostle Paul was shipwrecked in these waters. Gavdos is a small island, and apart from the excavations, the one highlight is a visit to the Lighthouse.

Lighthouse Tourlitis of Chora in Andros 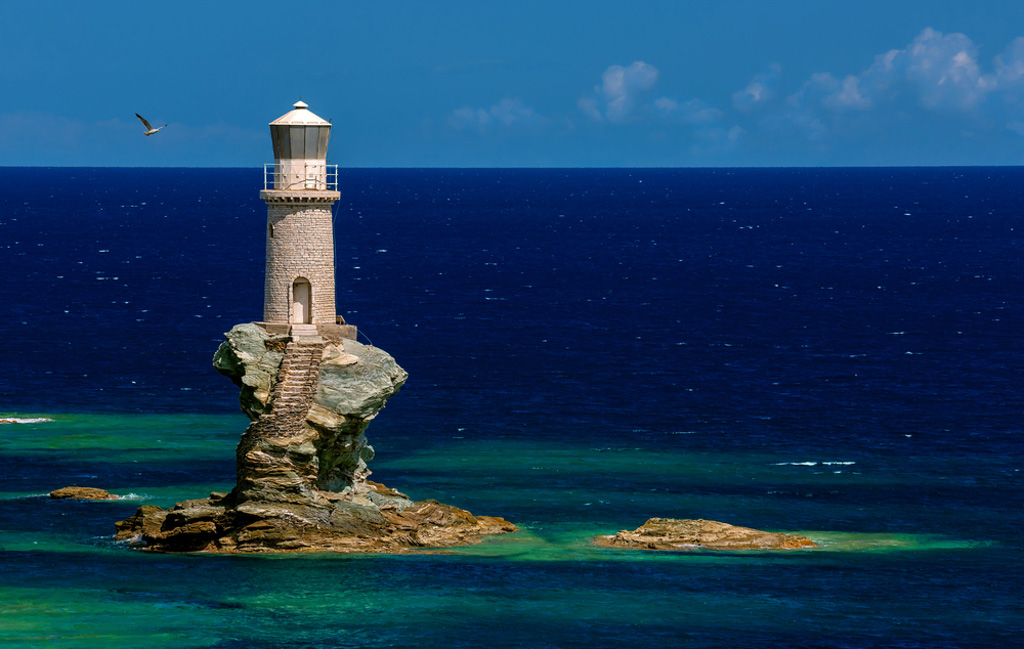 The Tourlitis Lighthouse of Andros was built in 1887 on a rock right in the sea.  It has a height of 7 meters, and a focal height of 36 meters with the luminescence of 11 nautical miles. It also stands out as being the first lighthouse in Greece to be automated. It is regarded as one of the most spectacular lighthouses in Greece and had also been emprinted on a stamp. 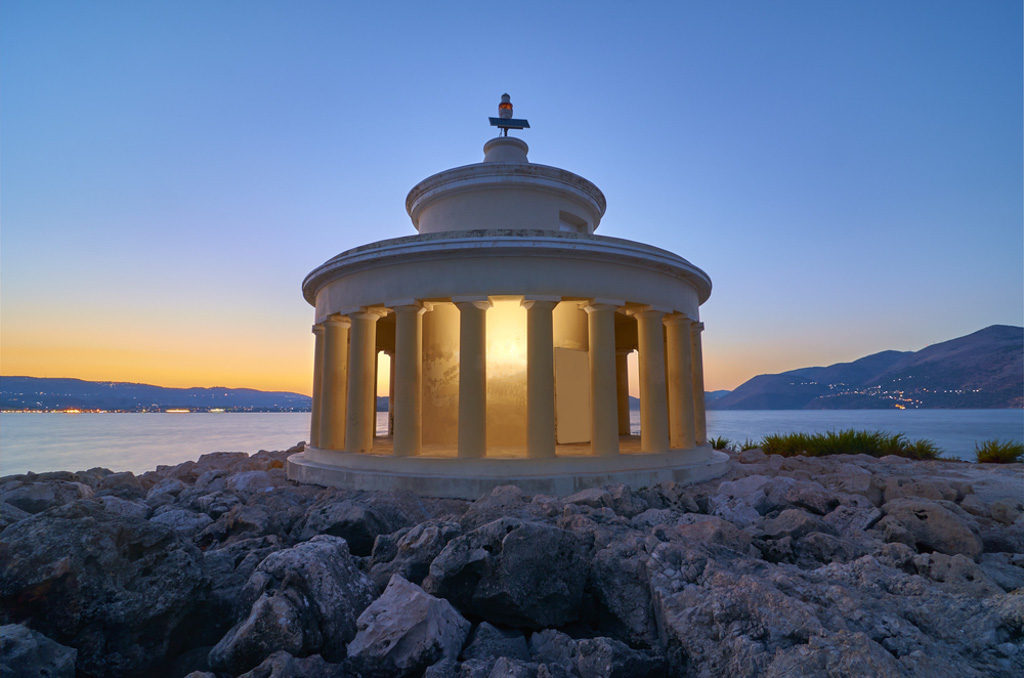 This lighthouse, situated on a man-made peninsula is a top attraction of Argostoli village and sought after for its photographic opportunities. It’s a circular shaped lighthouse with 20 columns and a tower of 8 m tall.

The lighthouse was built in 1928 but has been destroyed by an earthquake in 1953 and then rebuilt again in the 1960s to its original design. It still works today. 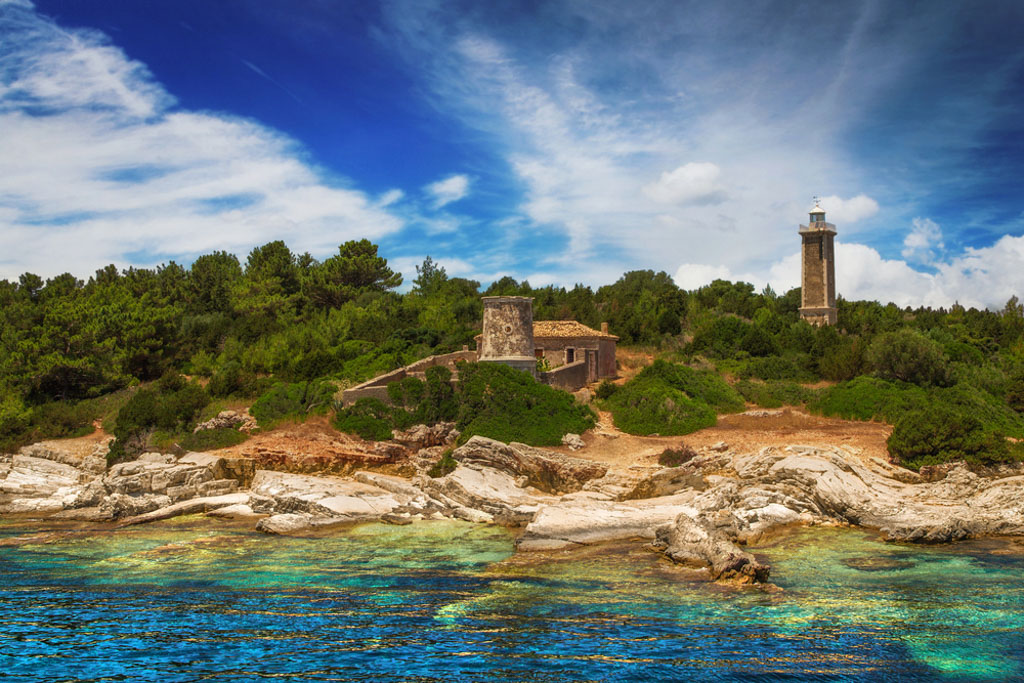 You can combine some beautiful walking trails with seeing the lighthouse of Fiscardo Kefalonia, situated in the northern part of Kefalonia. The stone lighthouse was built in 1892 but was another of the lighthouses destroyed by the earthquake of 1953. A new structure was built with a square tower of 14.2 m and a height of 28 m. 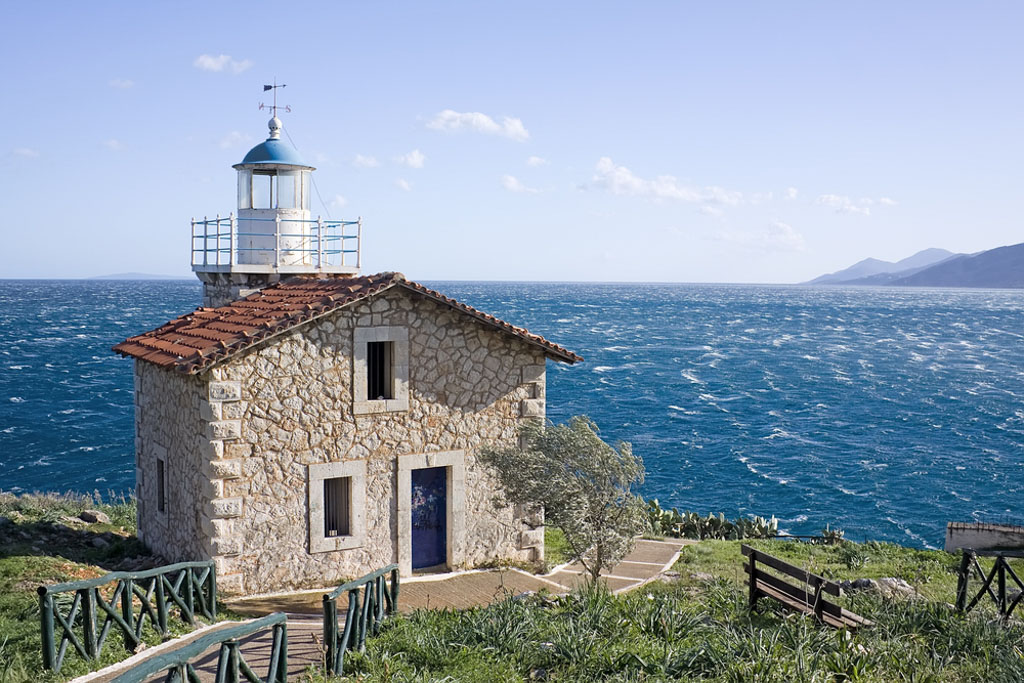 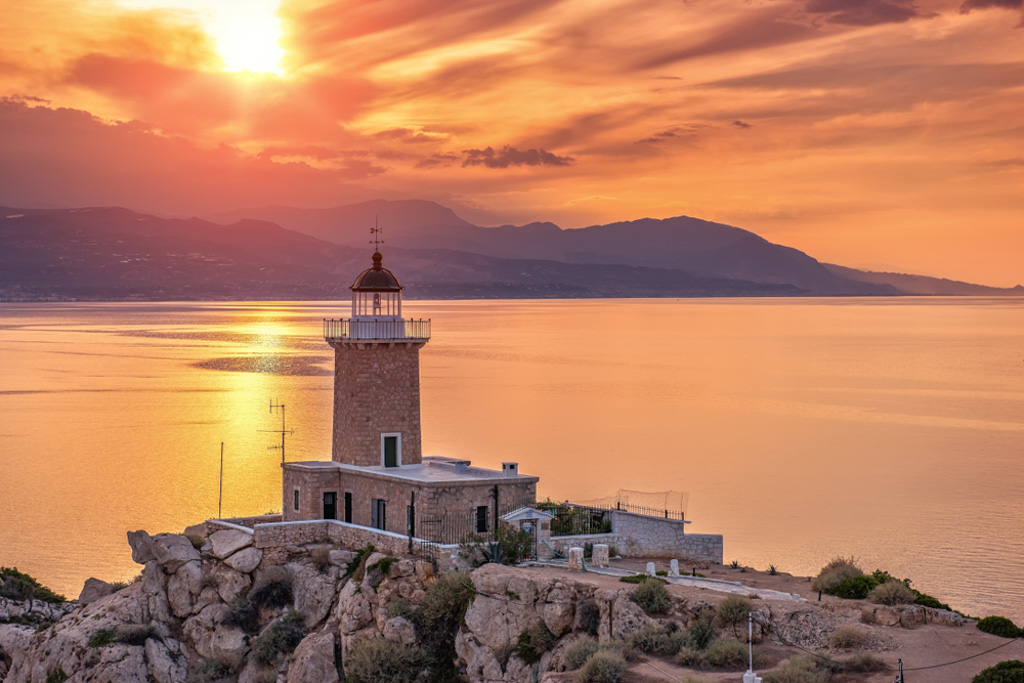 Many of the lighthouses of Greece were built during the 1800s, and the Melagave Lighthouse was built in 1897. It is found on the Agrilaos peninsula in Loutraki and is also know as Heraion Lighthouse.

There is the lighthouse keeper’s house attached to the lighthouse. It was renovated in 1947 and today it has a rectangular light tower. The tower is 13 meters and the height of the focal plane 58 meters. 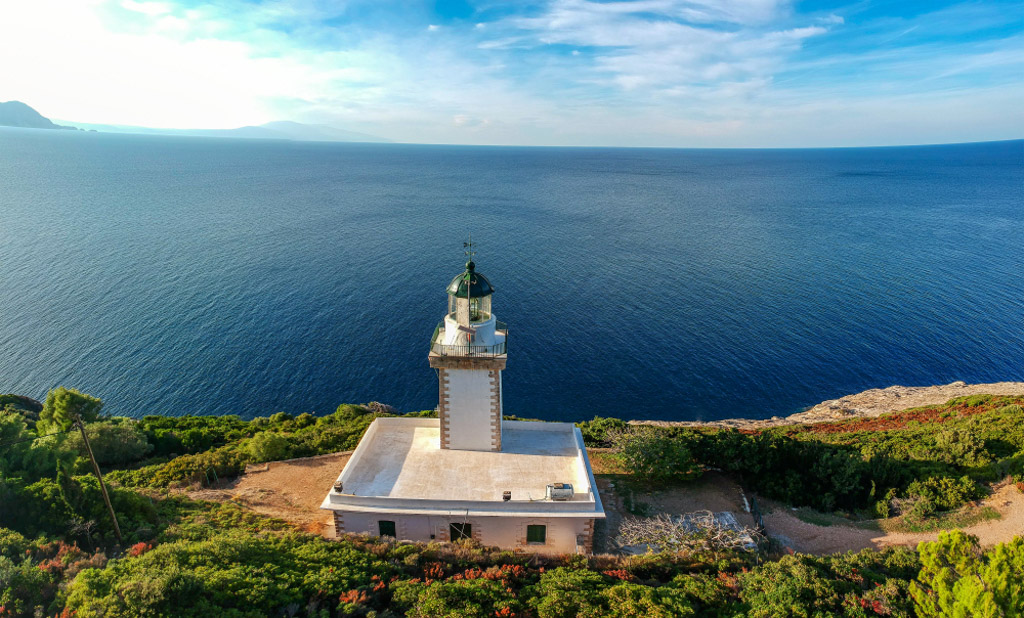 Situated on the north end of Skopelos, the lighthouse is 10km from Glossa in Gourouni cape. The stone tower is squarely built and is 17.8 meters together with the lamp cage.

The minister of culture declared the lighthouse an historical preservable monument in 1996. The structure was built in 1889 by the Greek State and originally was lit making use of oil. It was in 1944 that the lighthouse was electrified and in 1989 it was automated.

Lighthouse of the city of Corfu

If you don’t mind climbing, the lighthouse at Old Fortress in Corfu, Greece is known as the Sea-Tower and requires a hike up the Castel a Terra summit to reach the top. You’ll be rewarded with awesome views over Corfu town and the sea. The lighthouse was built in 1822 making use of stone and it is roughly 64 meters tall. 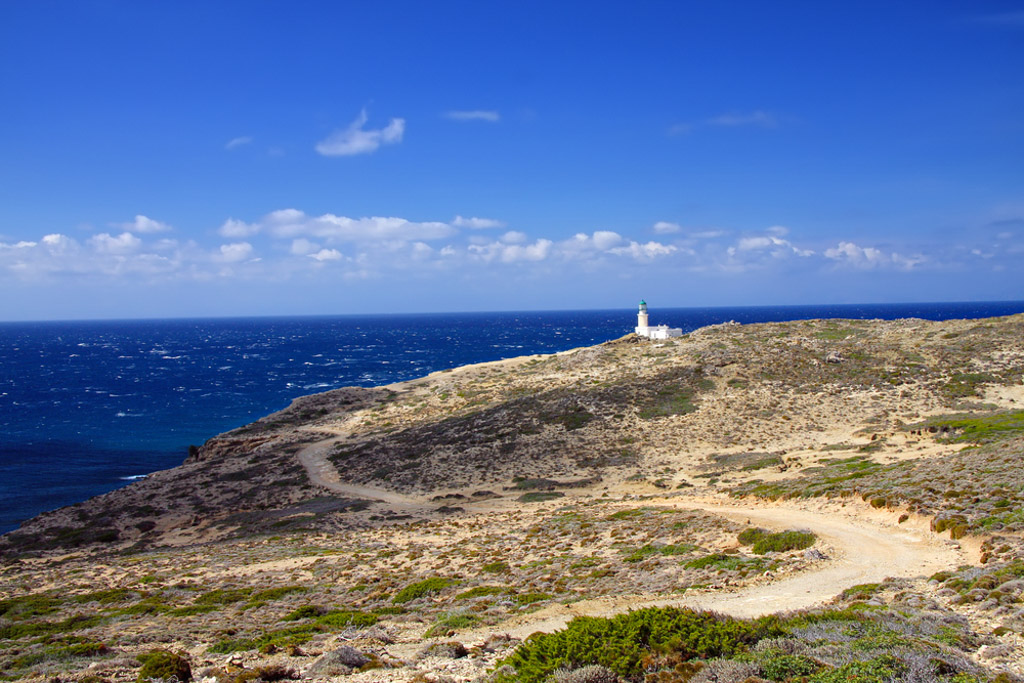 This lighthouse in the southern end of Rhodes Island is worth a visit. During summer, the island is a peninsula attached to Rhodes and during winter, with water levels higher, Prasonisi becomes an island, and the southernmost tip of Prasonisi has the Prasonisi Lighthouse. The lighthouse is 14 meters high, it was built in 1890 by Ottoman Lighthouses and includes a lighthouse keeper’s dwelling. The focal height of the lighthouse is 14m and it was in 1986 that it became automated. 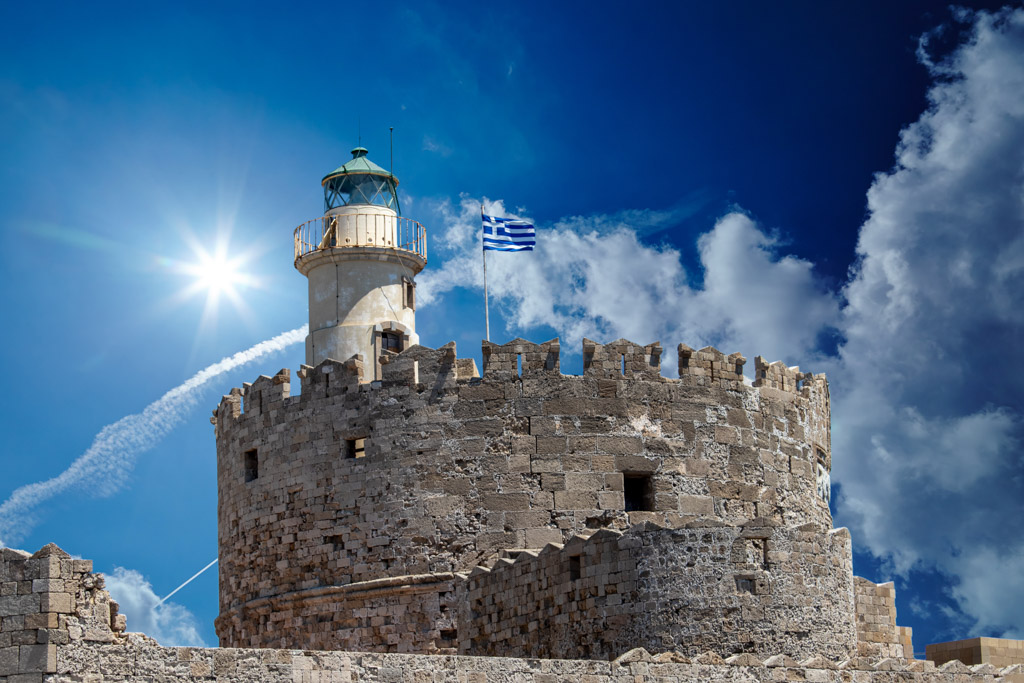 The Lighthouse is found at the St. Nicholas Fortress in Mandraki Harbor. It’s an ancient structure, going back to 1863, from the Ottoman period. The Lighthouse was set in operation again in 2007. The structure is a white stone tower that to this day still ‘lights the way’ by providing two flashes every 12 seconds.

This is another of one of the oldest lighthouses in Greece and it is built on the ruins of the temple of Poseidon and in the bay of the port in Vourkari, Kea. The beautiful lighthouse was built in 1831 by the French Company of Lighthouses and it is 8 m high. 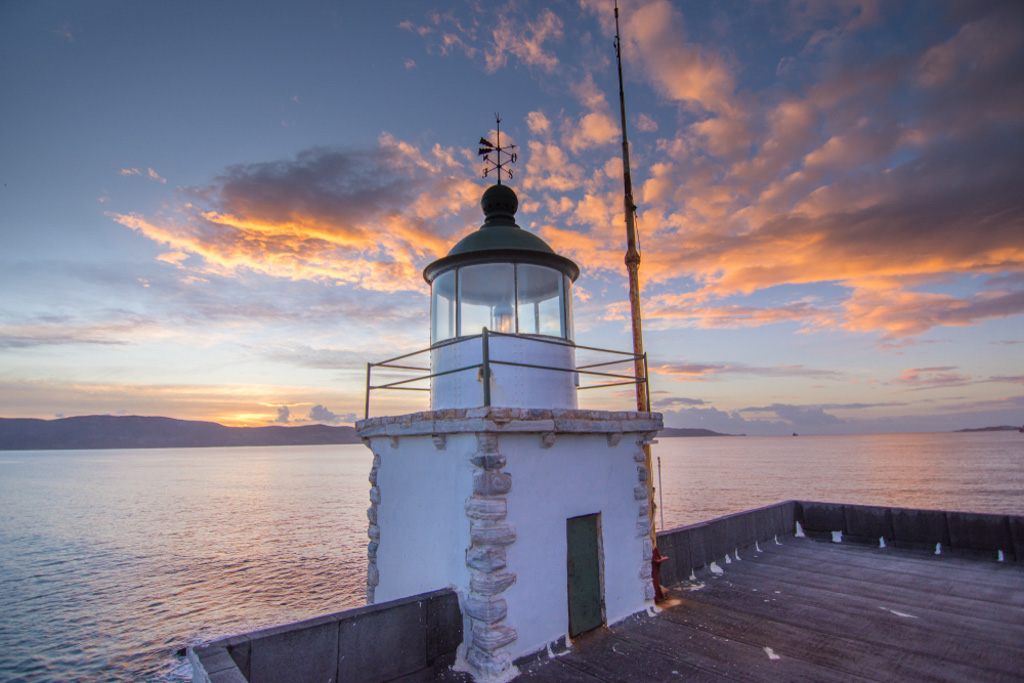 Built in 1892, the Vrysaki Lighthouse’s location is a bluff in Thorikos Bay. The ‘short-of-structure’ lighthouse has a focal plane of 21 meters and the height of the tower is 7.7 meters, flashing every 5 seconds. The nearest town is Lavrio, an important harbor. The lighthouse was remodeled in later years and today is a vacation rental for military personnel. 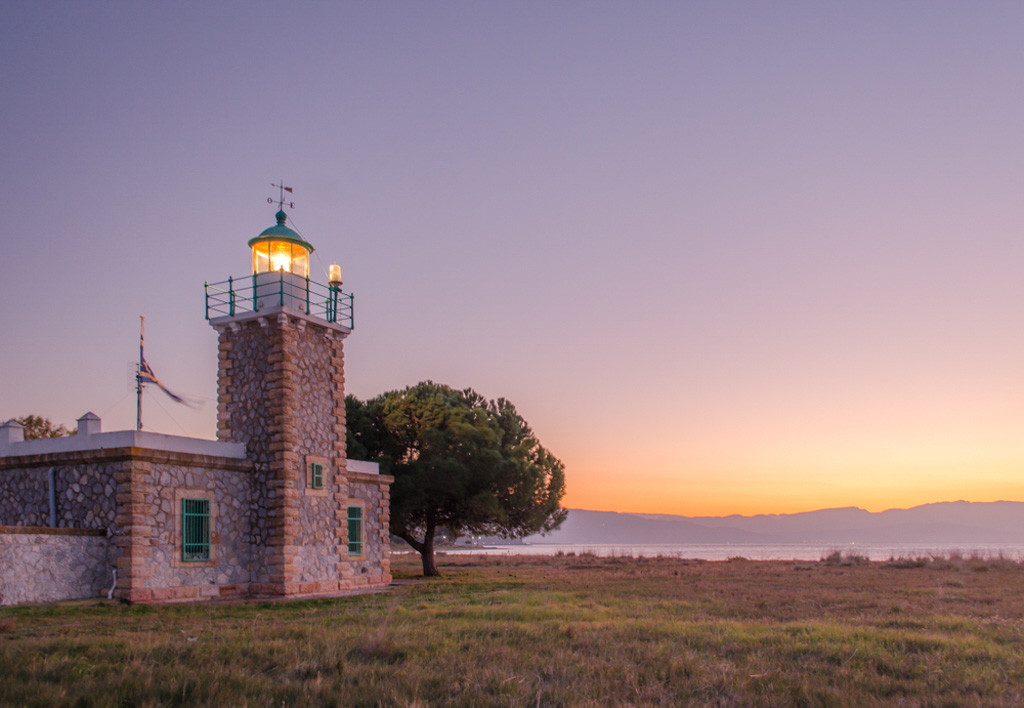 An automatic electric beacon today flashes white or green with ranges of 22.5 kilometers for the white light and 17.7 kilometers for the green light. The lighthouse is no longer open to the public but it is instead used as holiday accommodation. 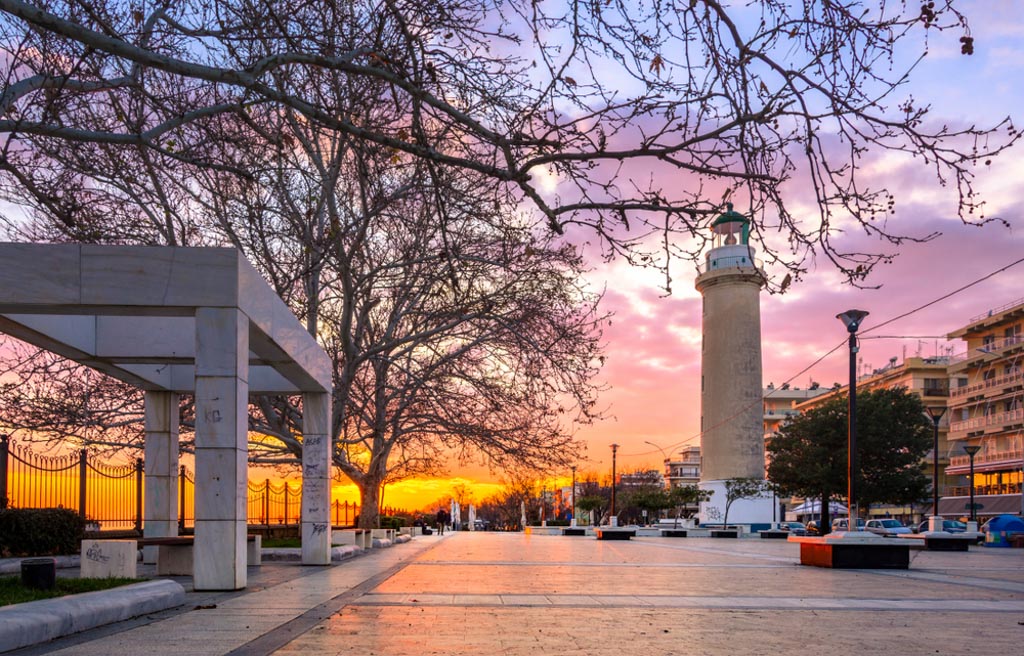 This is one of the lighthouses of Greece that is actually a registered trademark – the maritime city of Alexandroupolis’s naval symbol. The lighthouse was needed at the time of 1850 to 1880 and a French company, Ottoman Lighthouses built it.

The lighthouse has a height of 18 meters with a flight of 98 stairs to reach the lantern room at the top. It was built on a cylindrical pedestal with its overall height from the surface of the sea being 27 meters. It’s light can be seen at a distance of 38 kilometers out to sea. The vibrant waterfront with the lighthouse as focal point, has cafes and restaurants. 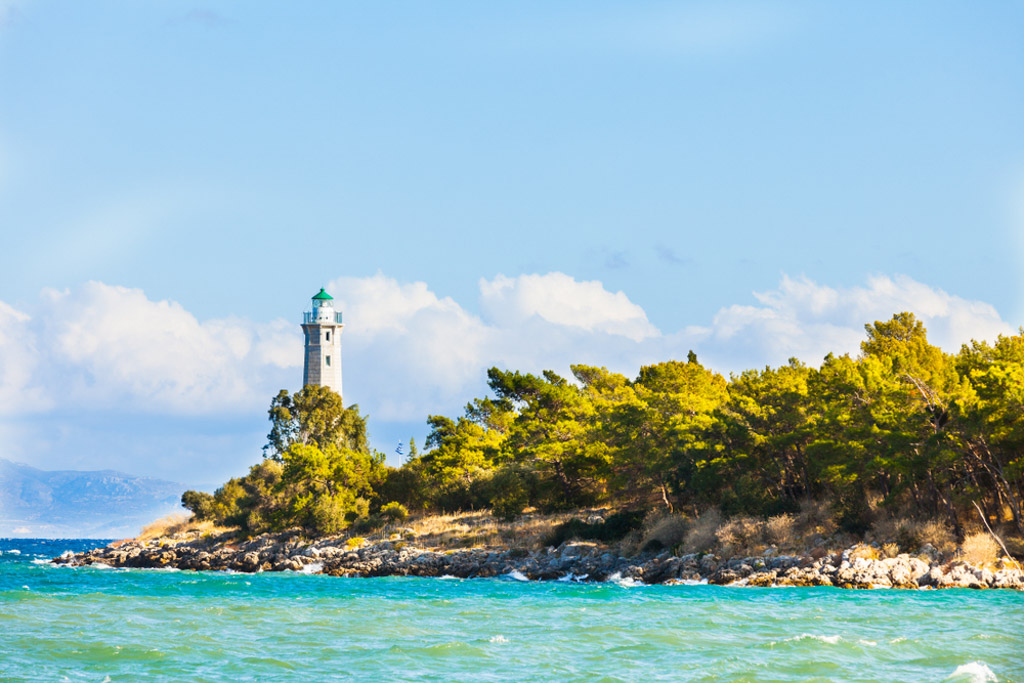 This lighthouse is found on the small island of Kranae, east of Gythio town. Built in 1873, 25 meters high and with its focal plan being roughly 78 meters, the structure is made of white marble.

You’ll find the Maritime Museum there that displays items from the nautical history of Gythio town. During World War II the lighthouse was abandoned and then put into use again, making use of acetylene. Today, it has a light radius of 9 nautical miles and flashes every 18 seconds. It is open to the public for visits. 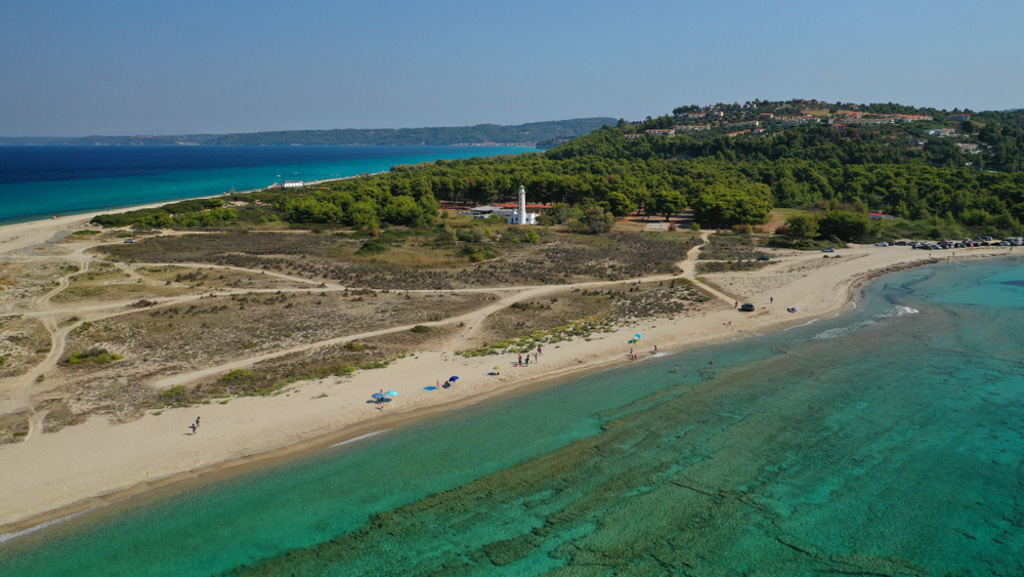 Built in 1864, the whitewashed Possidi Lighthouse is one of the lighthouses of Greece still in use today. It was out of operation for decades but came into operation again in 1944.

Someone has taken the time to plant a small garden next to the lighthouse and there are also tall pine trees that stand guard behind the lighthouse as it stands guard on its position on the edge of the beach. The lighthouse stands at 14,5 meters in height and is well worth a visit, especially because of the beautiful beach. 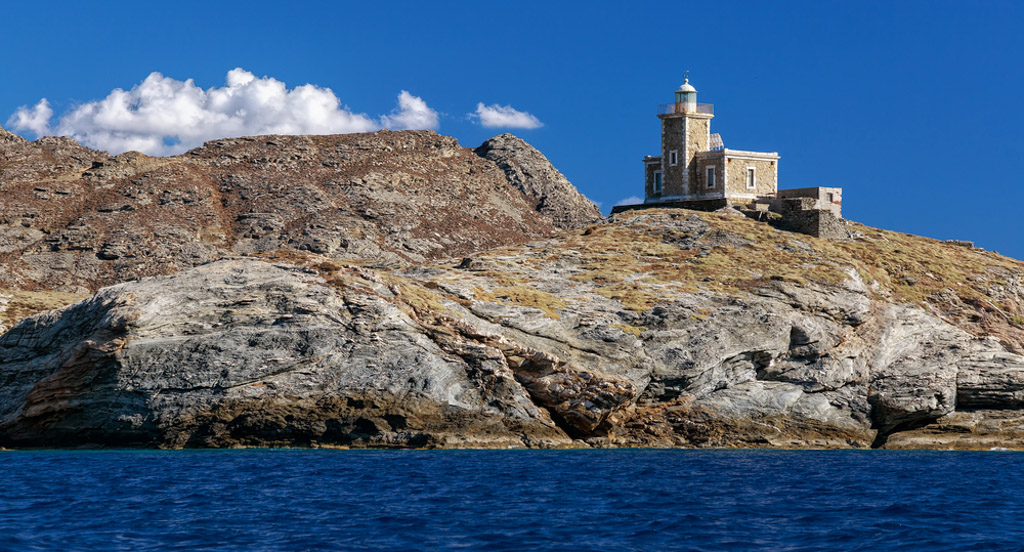 The lighthouses of Greece are sadly often neglected, such as the Tinos Island Lighthouse, found near the village of Livada in the Aegean Islands, Greece. Even in its neglected state, it is well worth a visit for the spectacular views it offers. It is located on a piece of rocky ground jutting into the sea.

There is a hiking trail that will lead you to the lighthouse. It isn’t as old as many of the other lighthouses of Greece, being built in 1910 and with a tower height of 10 meters and  focal plane of 41 meters.

The lighthouses of Greece are situated in some stunning areas and don’t only boast with illustrious histories that never fail to intrigue – they are beautiful to explore as well and a sight for the eyes to photograph.  There are more than those mentioned here but wherever you travel in Greece, you’ll want to include these ancient seafaring structures on your exciting itinerary list of things to do and see.