Travelers often overlook Phaistos Palace when its compared to Knossos Palace. On my trip to find out why, I  found myself among peaceful ruins that told a story on their own against an awe-inspiring view.

I stood alone, surrounded by weathered stones, long flat steps, and rows of tattered and faded clay pots. With a stillness in the air only pierced by the occasional call of a cicada, the late afternoon Mediterranean sun relentlessly beamed down on me and the ancient ruins of what was once a grand Minoan palace. 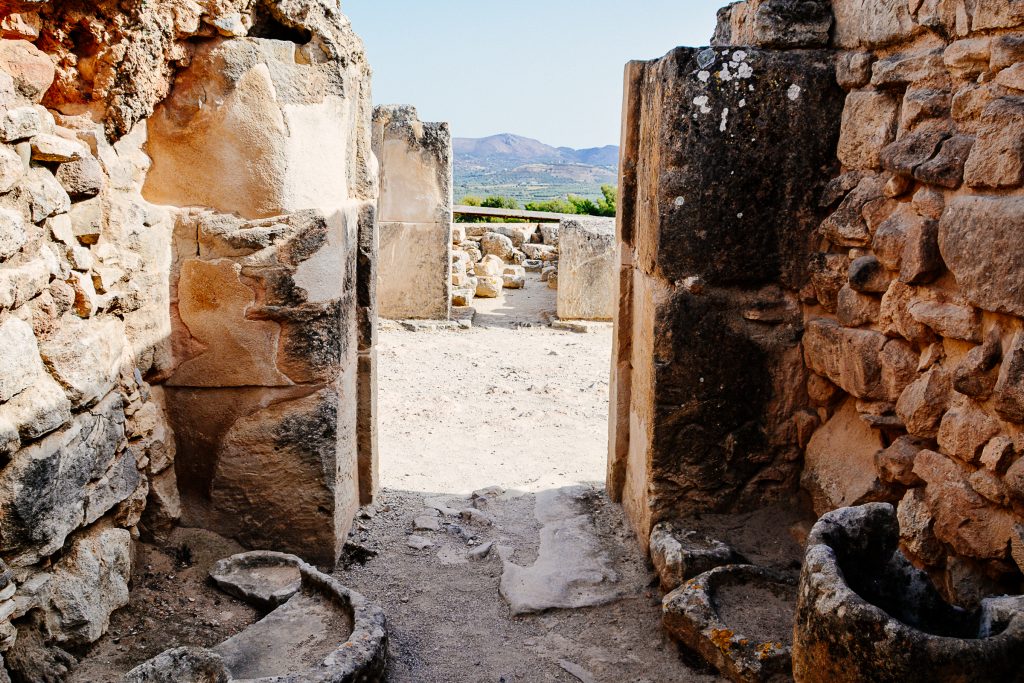 I was standing at Phaistos Palace, a complex built for Minoan royalty, located south of Heraklion. After visiting the famous – and crowded – site of Knossos Palace , which is the most popular ancient sight in all of Crete, I was curious about the lesser-visited Phaistos. Although second in line to Knossos, Phaistos was still a place of power. In fact it was one of the noblest centers in the grand age of Minoan civilization. 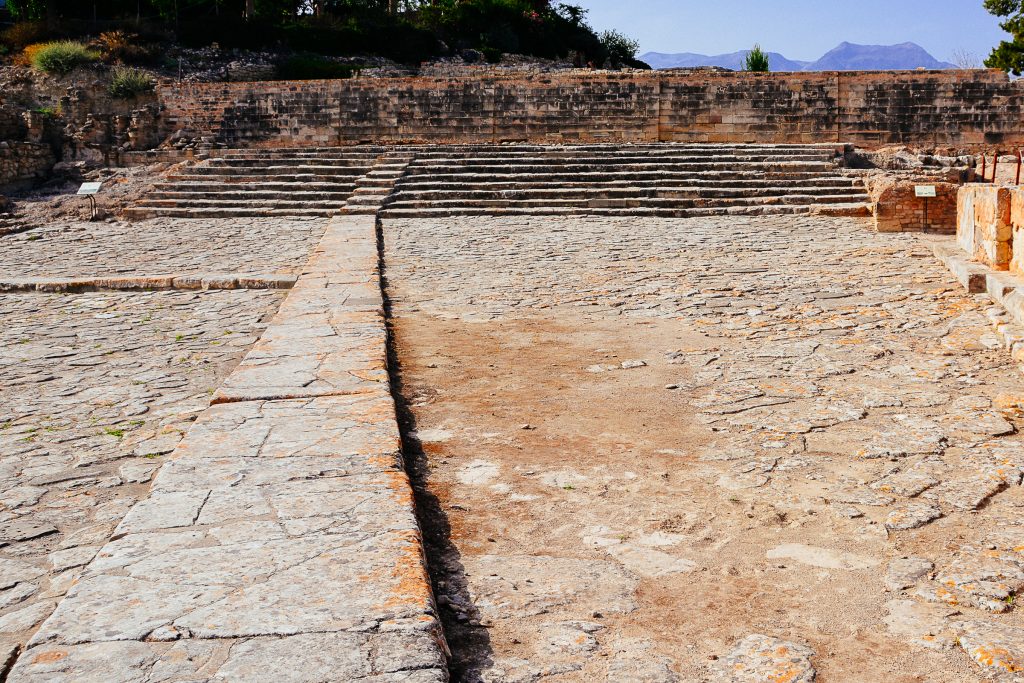 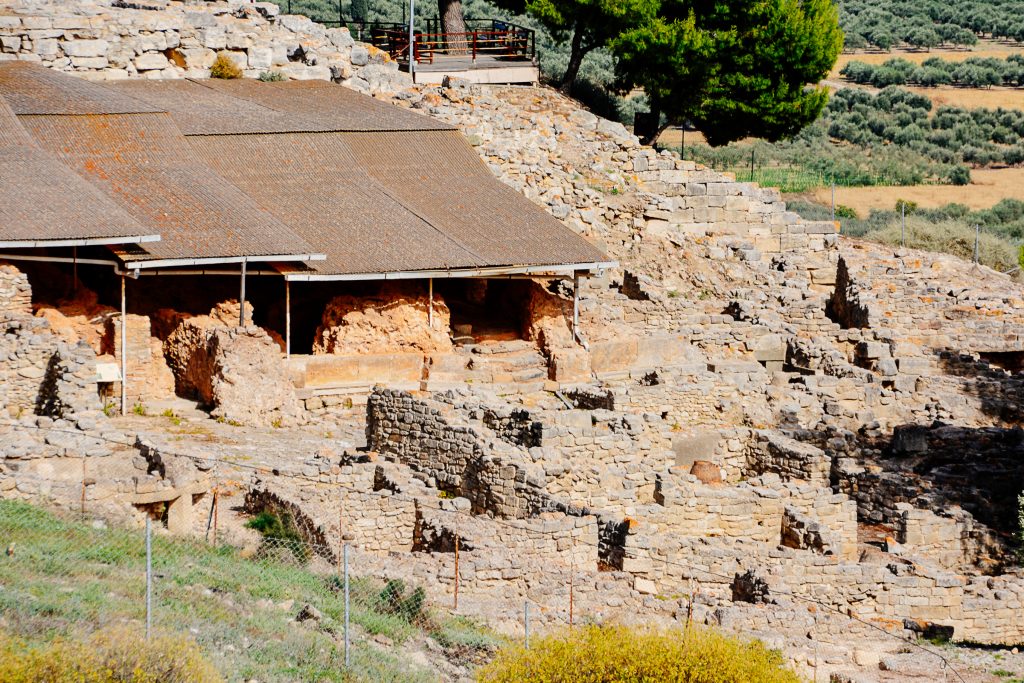 During my entire length of my visit to Crete, the facts and history known about the Minoans, who lived during the Bronze Age, seemed to follow me as I visited museums, ate Cretan food and just talked to locals. I learned about their advanced their way of life which was incredible for the time (2800-1100 BC). They built plumbing systems, installed toilets and promoted equality between men and women. It was a time of beautiful art and pottery and surprising fashion choices. For example, women wore low-cut blouses to completely expose their breasts. 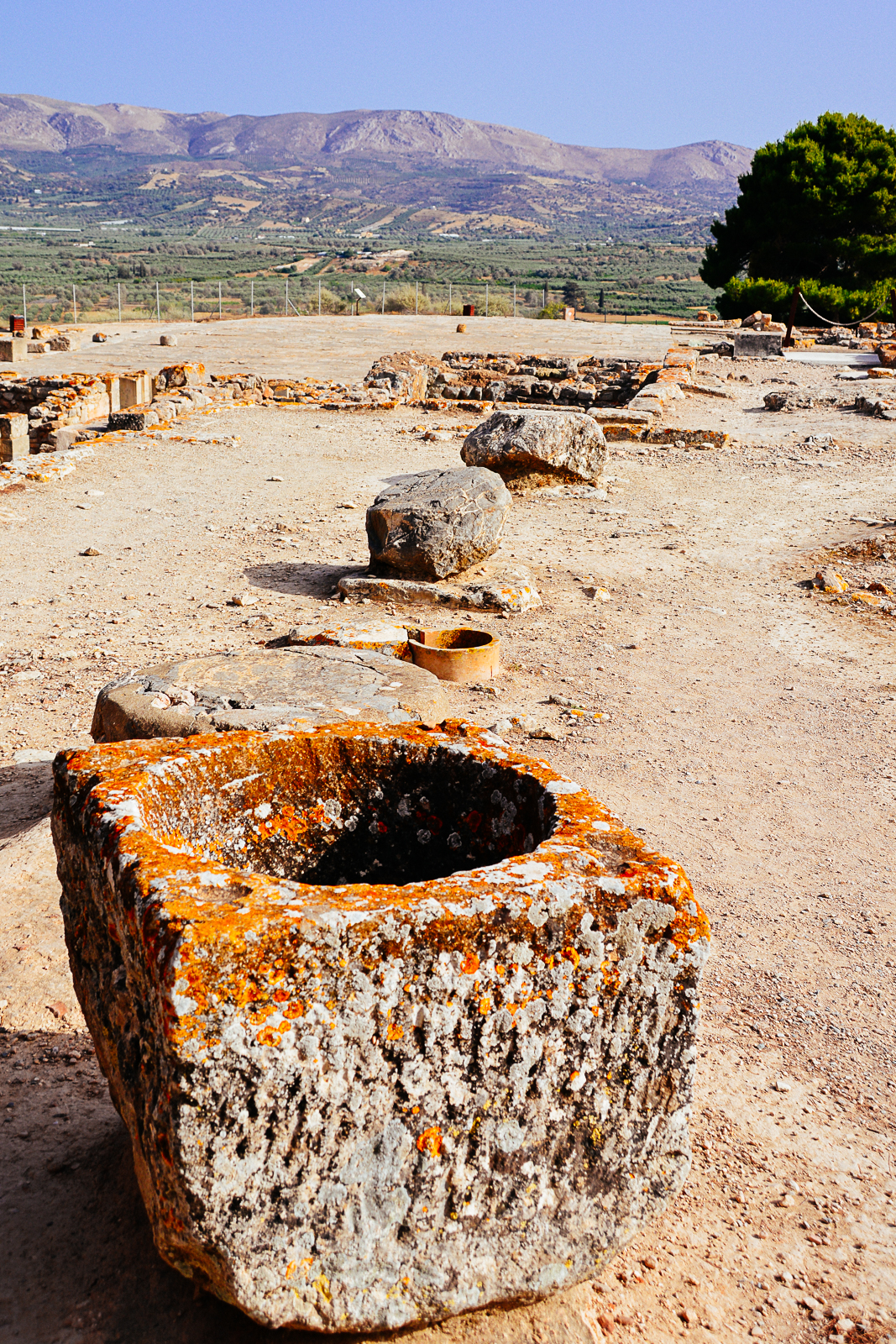 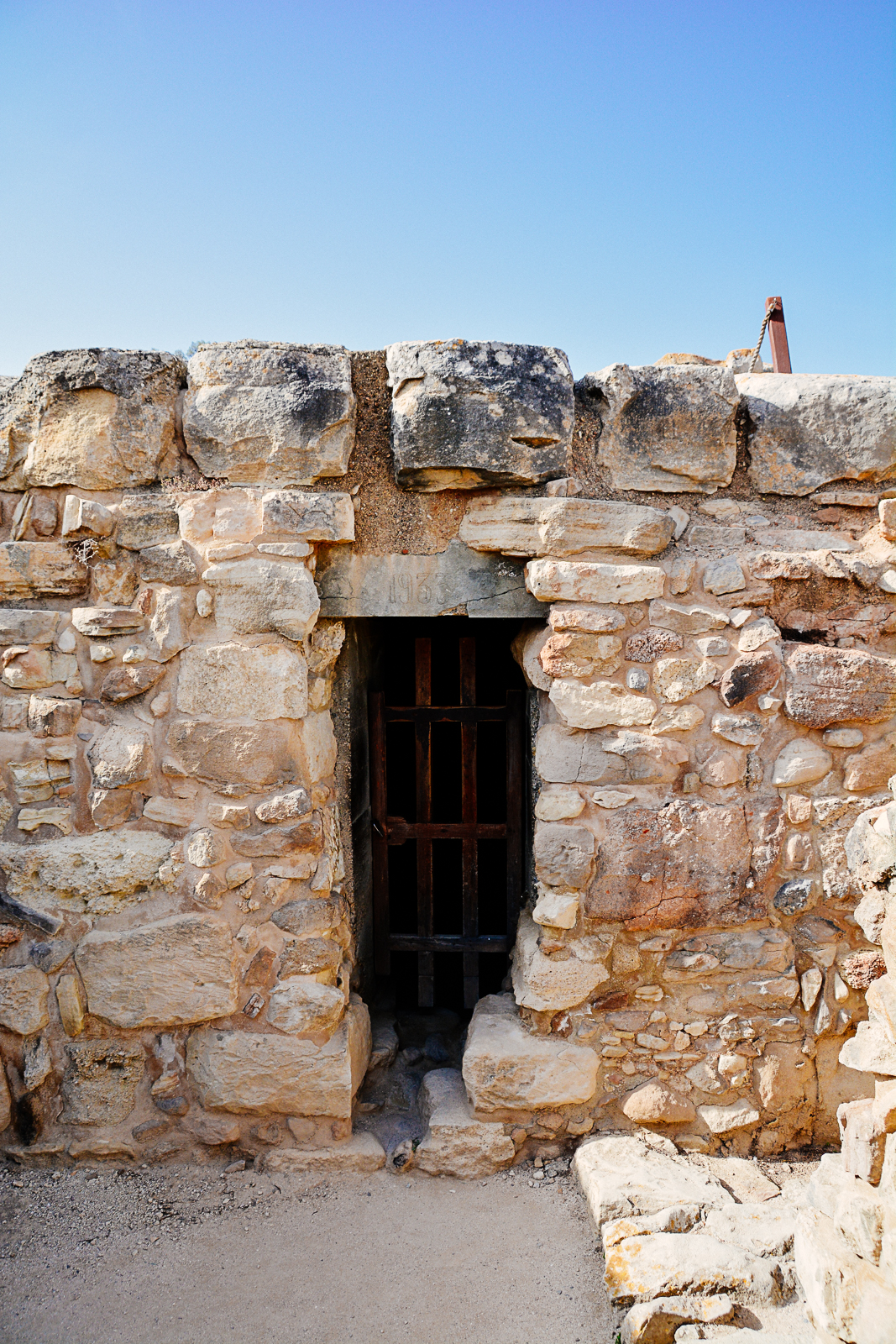 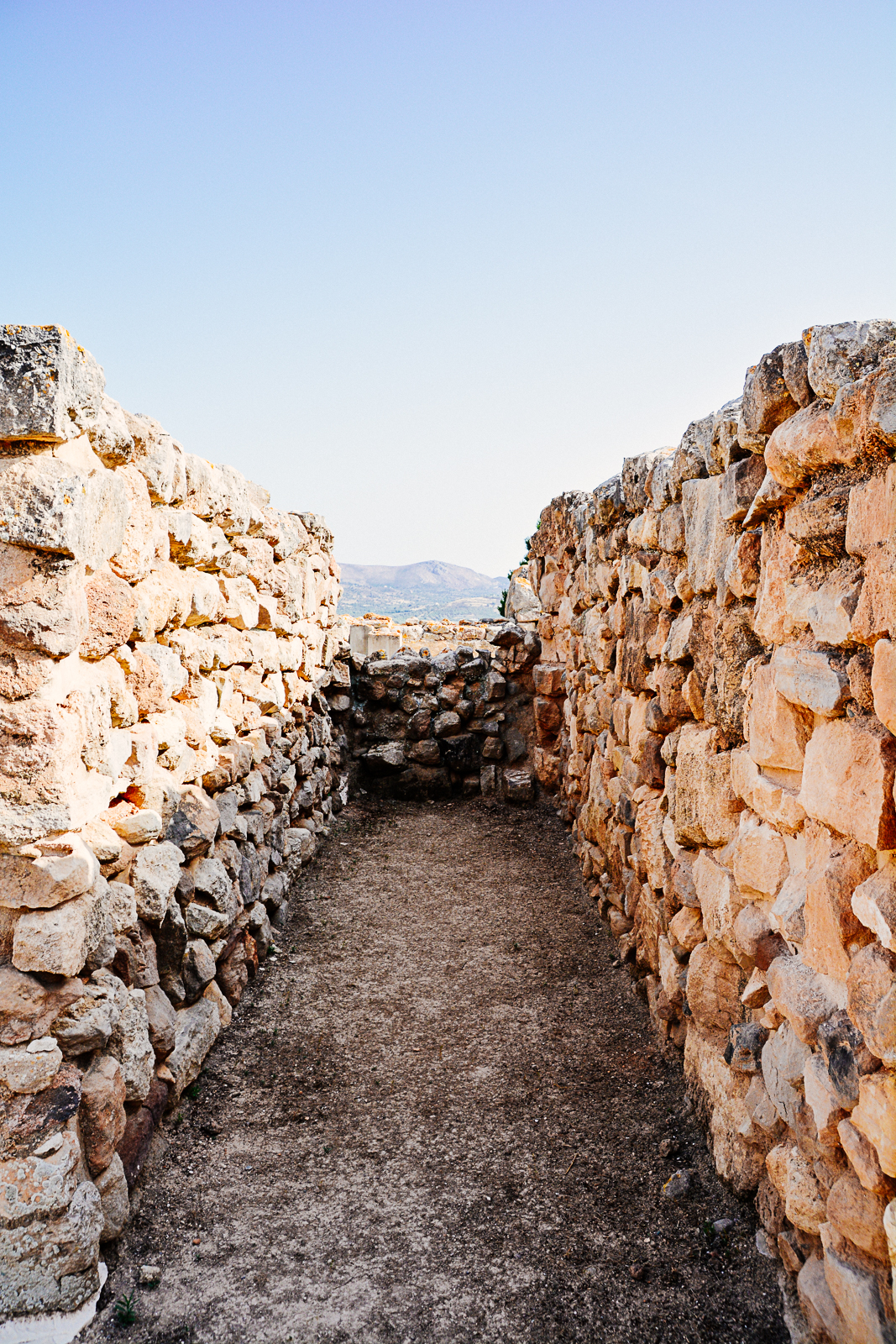 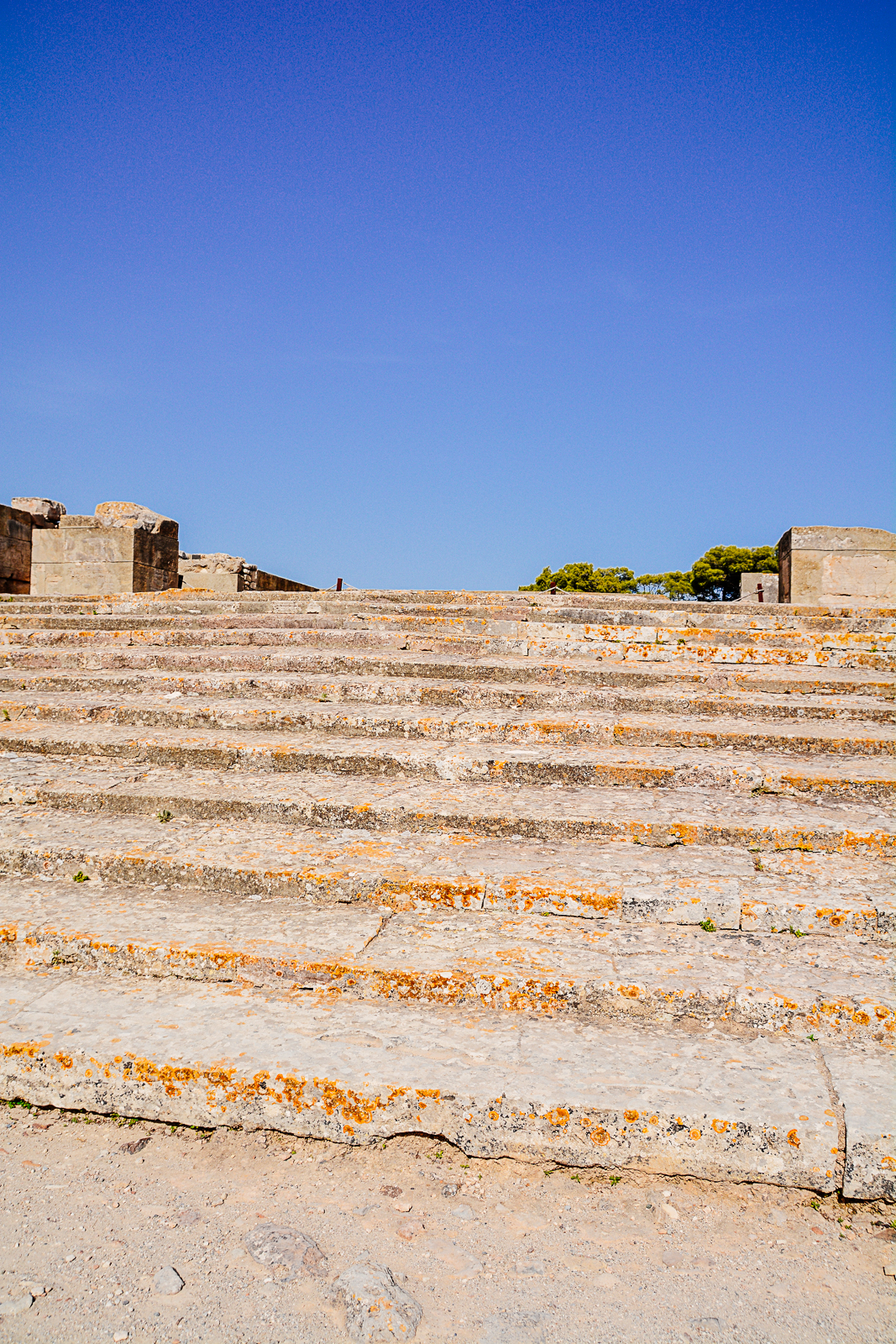 Figuring it Out: Phaistos Palace in Crete

Without a guide, I wandered through the quiet, hot air of the open site. Clearly defined paths led the way, bordered by stone rocks polished and weathered by thousands of years gone by. Passing wall after uneven wall, some stood there just crumbled and exposing a sort of depressed smile. It wasn’t always that way, of course. Each wall and stone layer was once the solid makings of something grand and untouchable by the commoner. 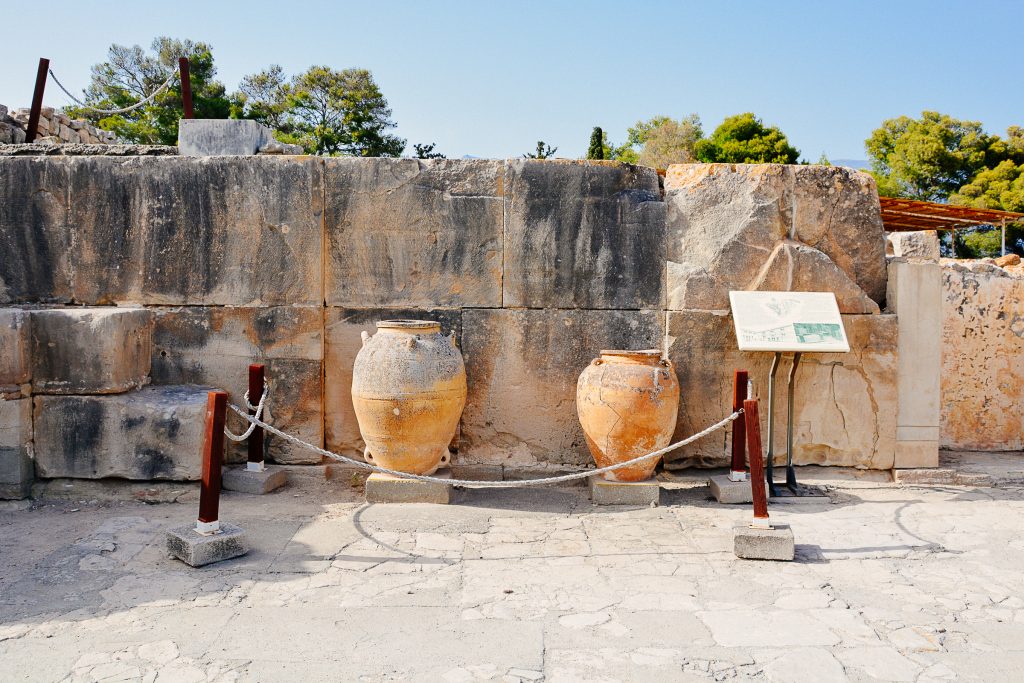 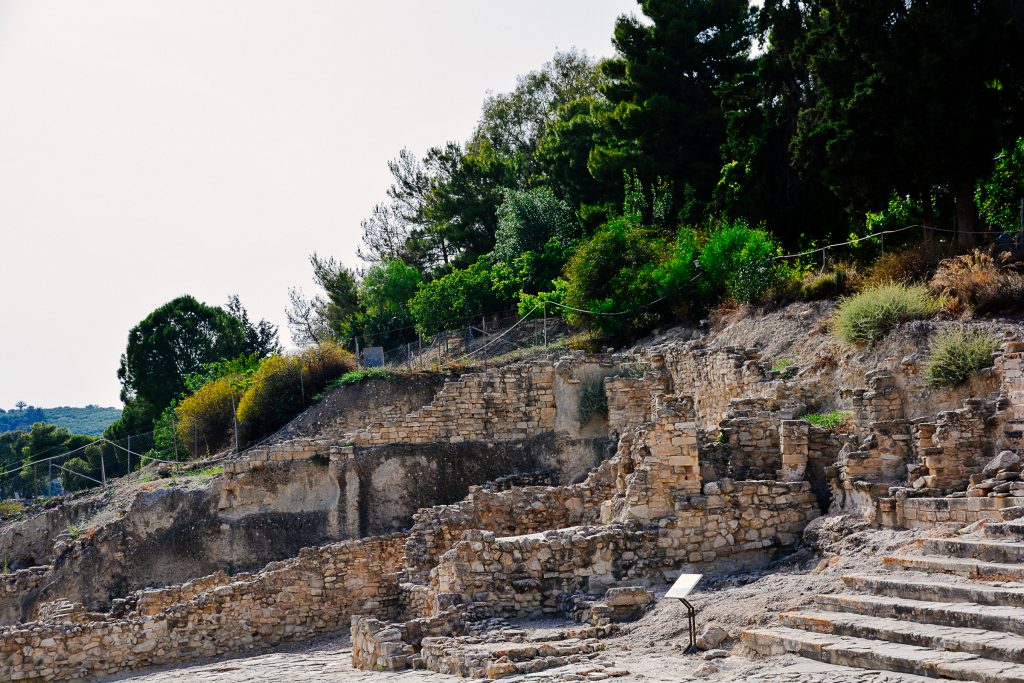 I stopped here and there to make out what were once small, cell-like rooms and then a larger banquet hall or meeting room where two marble pillars looked like they once served as the legs to a large table — at least it seemed like it. How lovely would it have been to be a guest at a Minoan royal party?!

I walked through a fantastic circular stone courtyard and what must have served as a theater or performance area. Nearby, underground storage closets held gigantic clay vases that I could have easily climbed into. 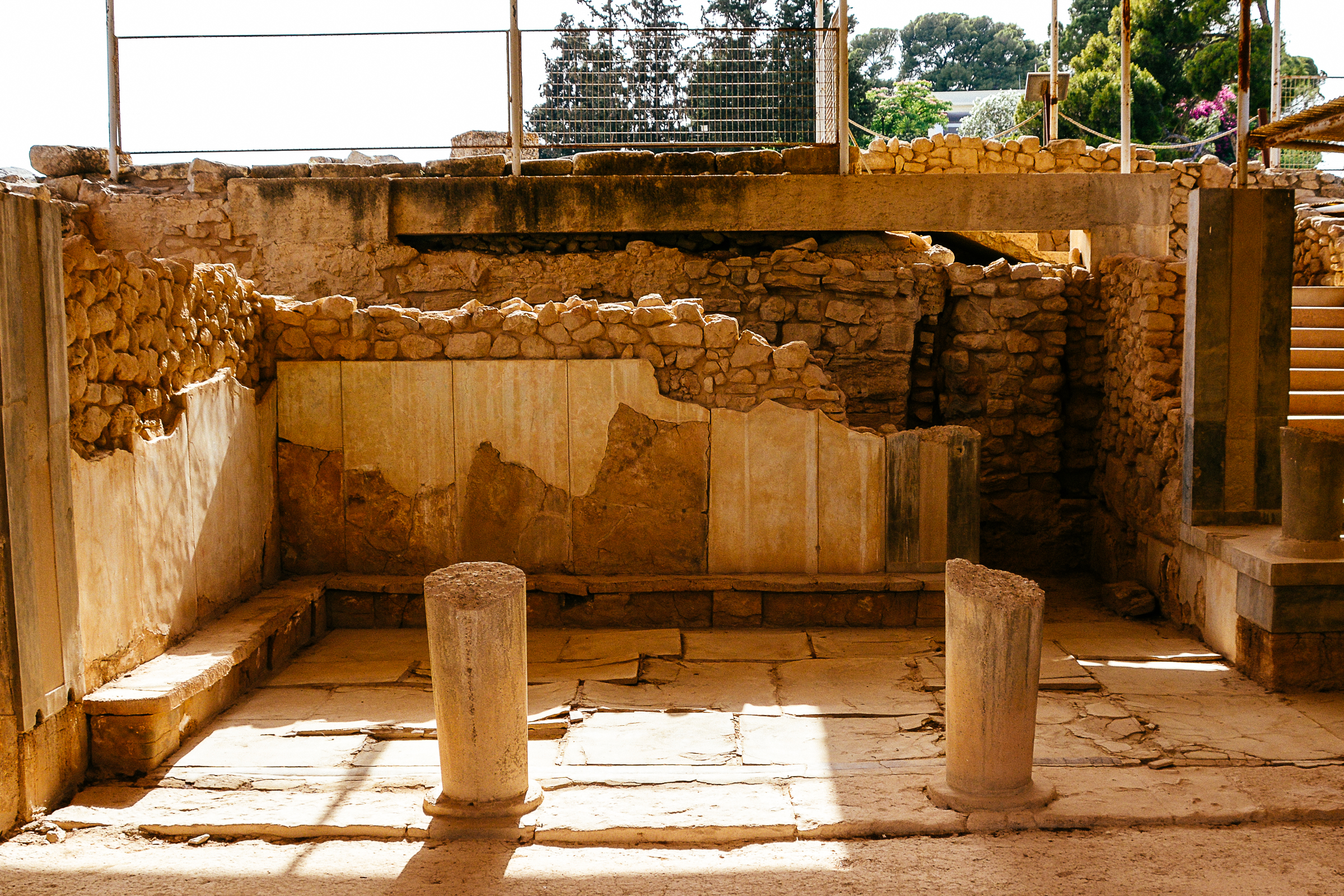 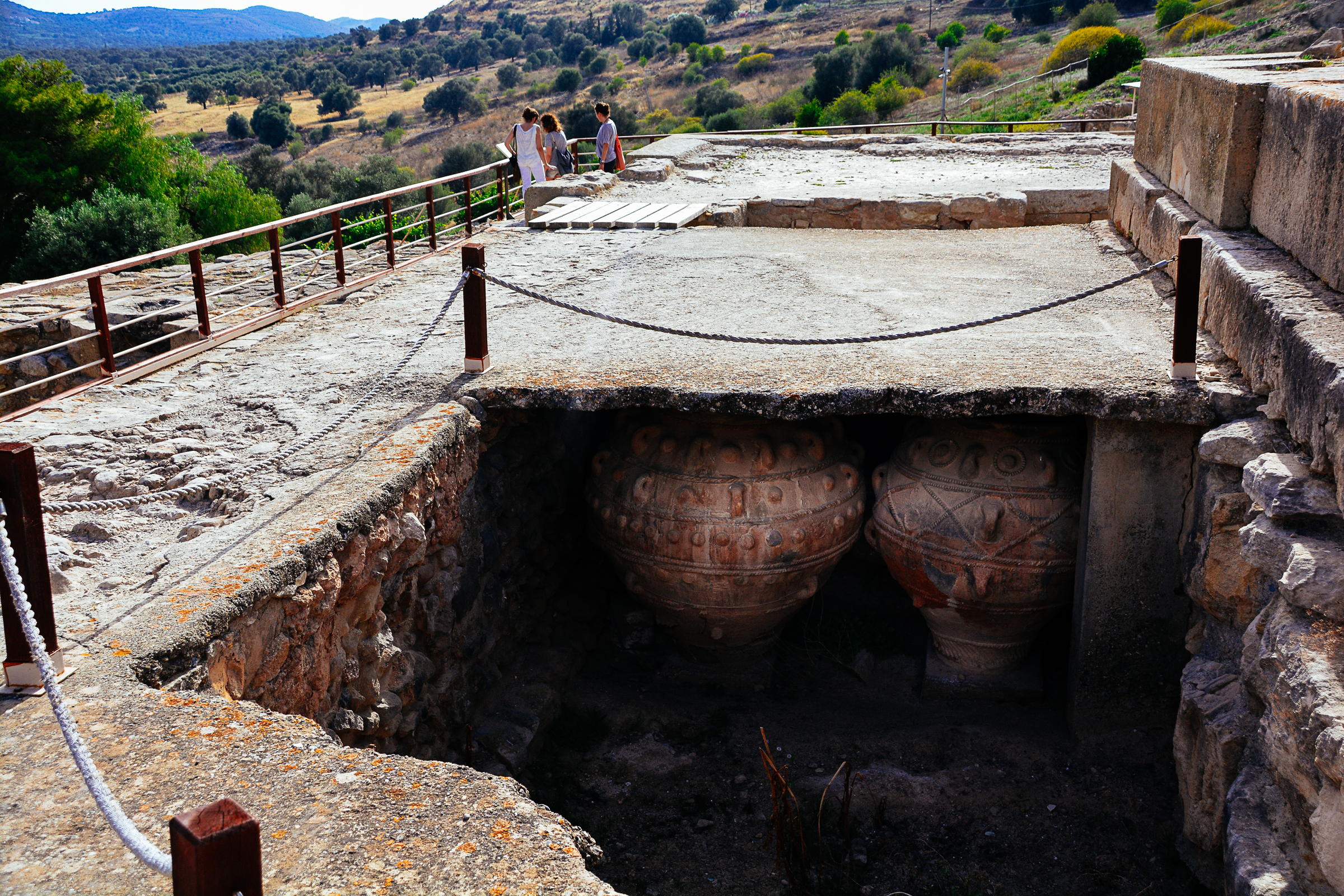 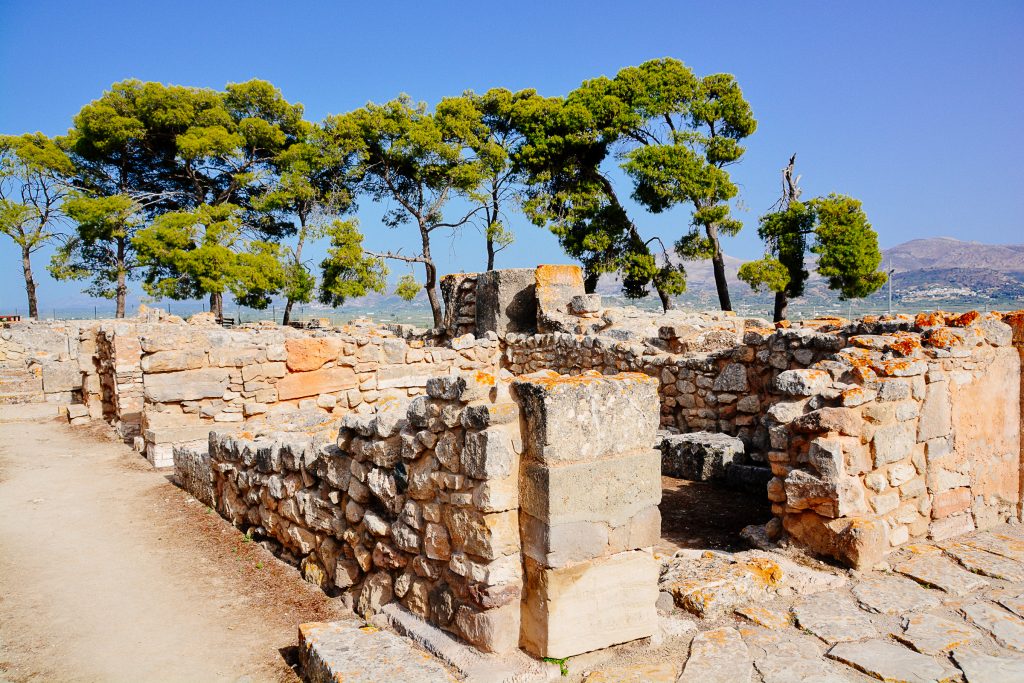 At one point, I took a rest from the stagnant heat by setting myself down on a bench set in the shade of leafy tall tree. According to a placard, I was sitting right outside of Royal Apartments. As I gulped some of my bottled water, I looked out at the Messara Plain to fully take in the royal view.  At that moment, as I sat back to take in the rolling lush valley view below, a cool breeze ran up the hill, surprisingly strong enough to sweep through my tank top and unsettle my loose hair falling from under my sun hat. The gust lingered like cool relief and in the process unexpectedly offering me a delicious taste of nature. 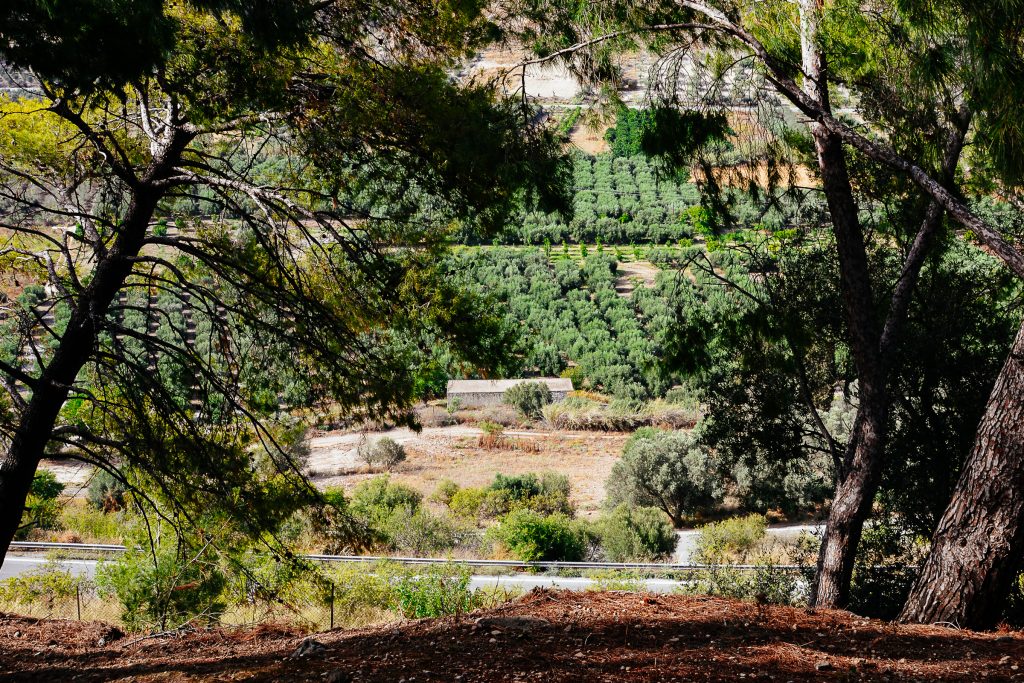 I closed my eyes thinking how the palace residents must have loved this shaded corner set on a perfectly sloped hill, offering a view for miles. I sat for some time, perhaps a long time. It turned out to be a perfect place to be with my thoughts that hot Mediterranean afternoon, just outside of what was served as one of grandest and most mysterious palaces of its time.

I left Phaistos understanding a bit more about Minoan architecture and looking back, I loved exploring the grounds alone. Here are some thoughts and tips if you plan to visit Phaistos Palace in Crete. 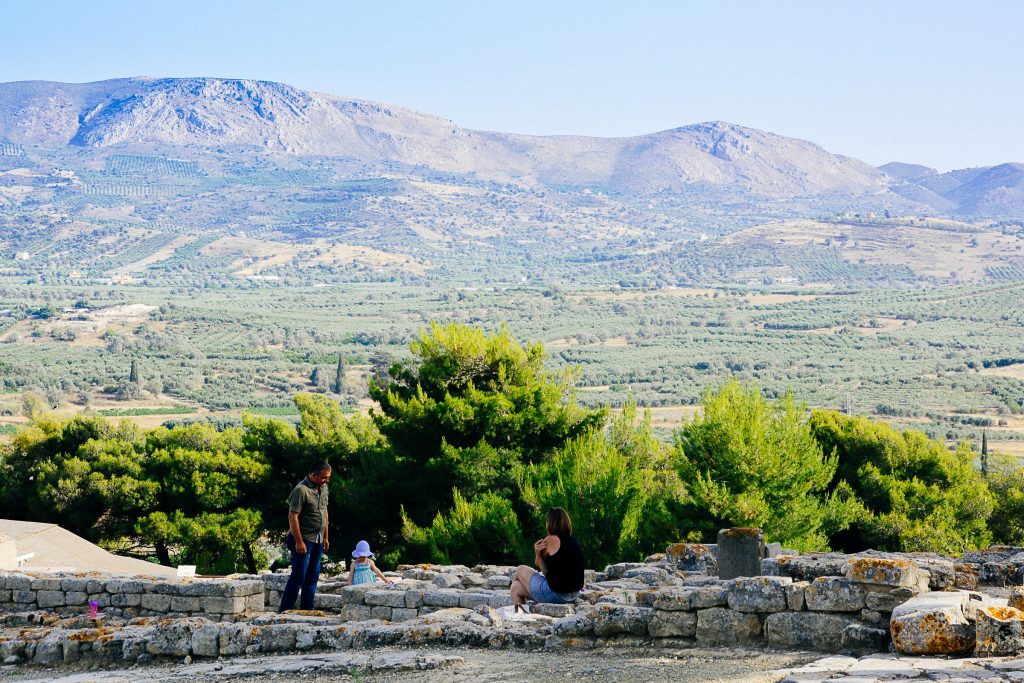 If you could only choose one Minoan palace during your trip, visit Knossos. Yes, it will likely be crowded, and way too hot but if you love exploring ancient sites – it is the most organized and significant. There are many guides available to walk you through. Here’s a tour I recommend: Knossos Palace Tour

Phaistos is about a 1.5 hour-drive southwest from Knossos. I didn’t have a guide and ended up spending less than an hour on the site, taking my time and reading a lot of the placards to learn more about the place. Unlike Knossos, there aren’t guides waiting for your business outside. So if you want one you need to arrange it in advance. I highly recommend you arrange a Private Tour of Phaistos if you want to make more sense out of the ruins. I’ll likely do that at some point in the future.

A great stop after Phaistos is Matala beach. You can read about Greece’s stunning “hippie” beach in my earlier post: Beaches of Crete.

There is a standard entrance fee of 8 euro. Check the Phaistos website for more about the seasonal opening and closing times.

While Knossos gets all the glory, there are other palatial ruins in Crete that you can visit if you are fascinated by Minoan culture. Besides lesser-known Phaistos, the others to check out are Malia, Zakros and Kydonia. Note that Phaistos and these other sights are not the most popular, as you may have gathered, so I recommend a  Private Full-Day Sightseeing Tour to incorporate a comprehensive tour of Phaistos Palace and these other locations are included in your holiday agenda. 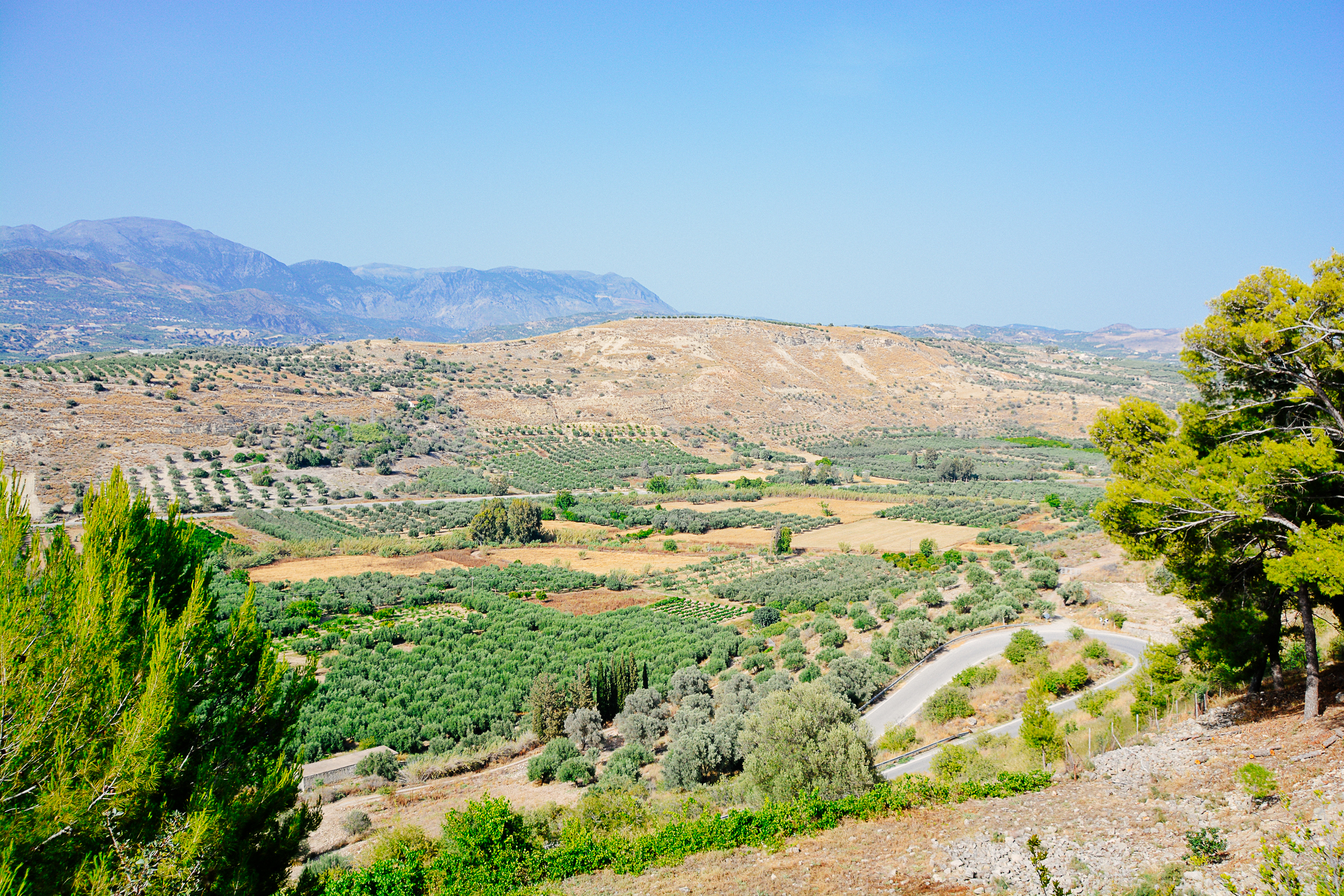 What to Look Out for at Phaistos Palace

The Upper Court is connected to the palace by a long staircase.

You’ll be able to make out the theatre which hosted performances. Nearby look for four round structures that stored grain.

In the West Court, look out for the Grand Stairway which led to the main palace entrance. It was known as the Propylae, of which only the pillar bases survive.

The Central Court was once lined with columns and was the meeting point of the palace.

Check out the Royal Apartments. The Queen’s Megaron was a bedroom that featured gypsum-paved floors and benches. Immediately behind it is the King’s Megaron.

Planning a trip to Crete? Be sure to check out my earlier post: Where to Stay in Crete for rundown of some great stays.

For a full rundown of posts relating to traveling Crete, check out my mini-guide here.

Have you ever visited a lesser-known archaeological site during your travels around the world? 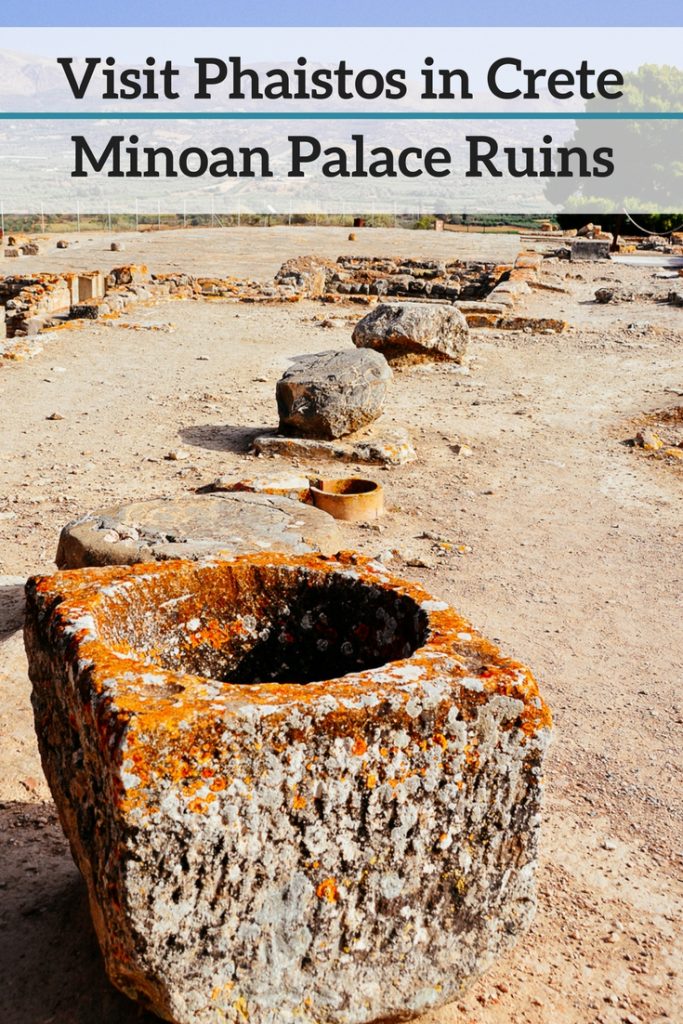