The abandoned earthquake villages of Kefalonia are a fascinating look into the island’s past before an earthquake flattened the island and changed it forever.

A 1953 earthquake left much of Kefalonia in ruins.  Some villages remain untouched since then, one of them is Old Valsamata.

When I visit Kefalonia, I stay in Valsamata. That’s where Stef’s godmother or nonna lives.  During our last visit, I discovered she used to live in the original Valsamata town nearby. After the earthquake, when her town was considered a loss, a new one was built.  Today’s Valsamata is where nonna lives along with 1,000 other residents. 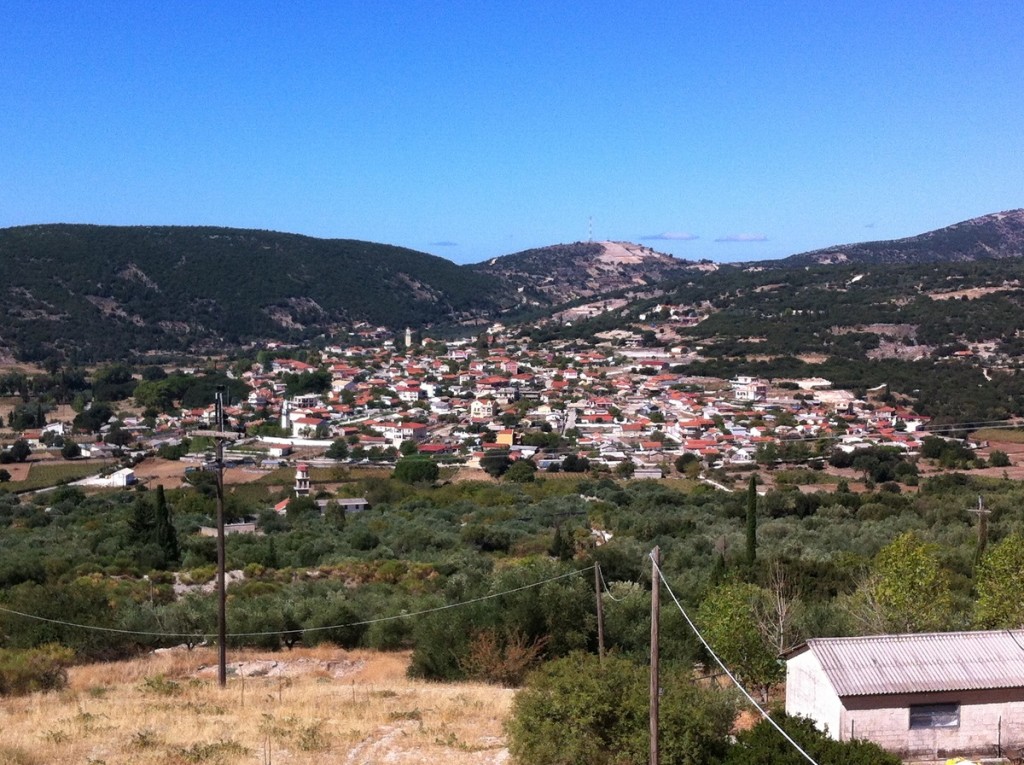 A Walk to the Original Town Down the Road

Stef and I took a short walk to visit his godfather’s grave at the church graveyard on the outskirts of that original town.  The church itself had been torn down to pieces and fallen stones and rubble crumbled on many of the plots.  The church was the entrance to the past. 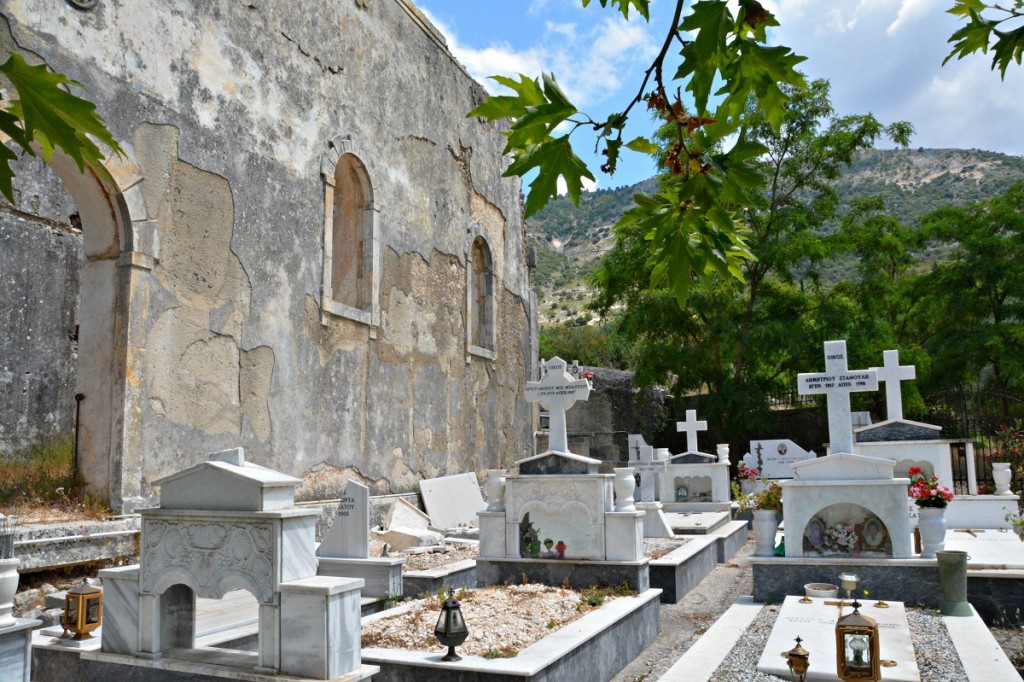 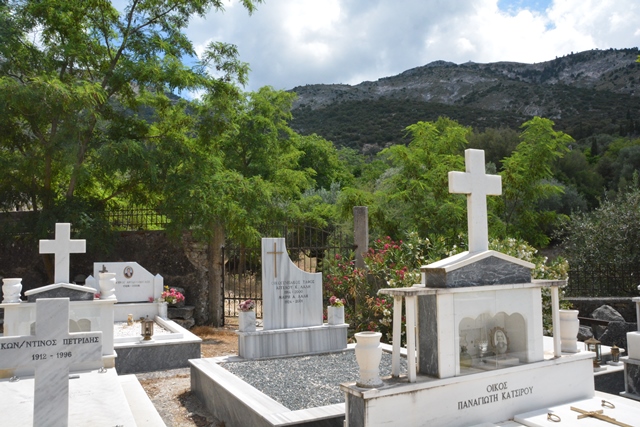 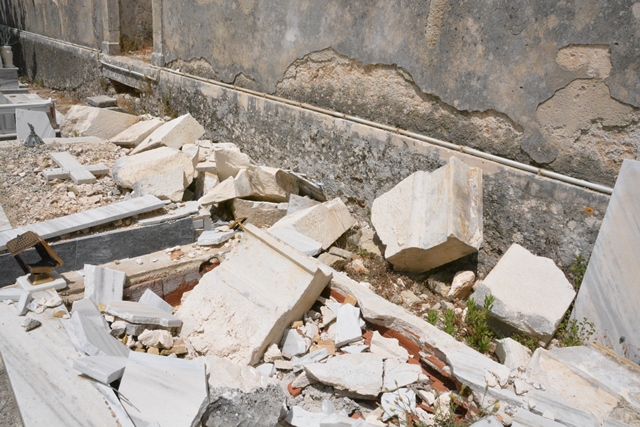 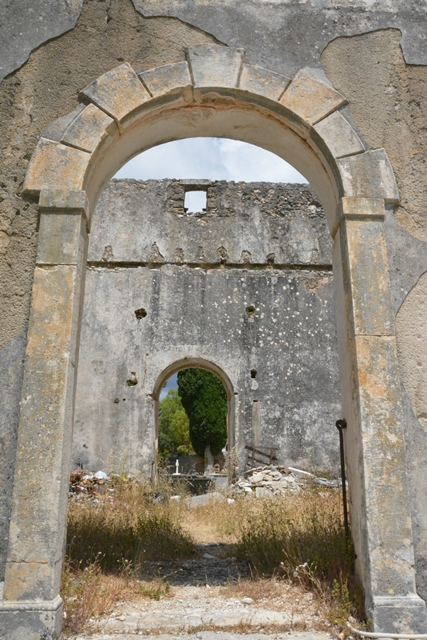 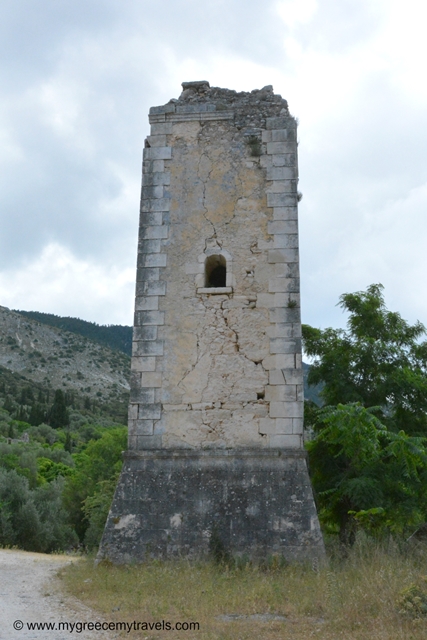 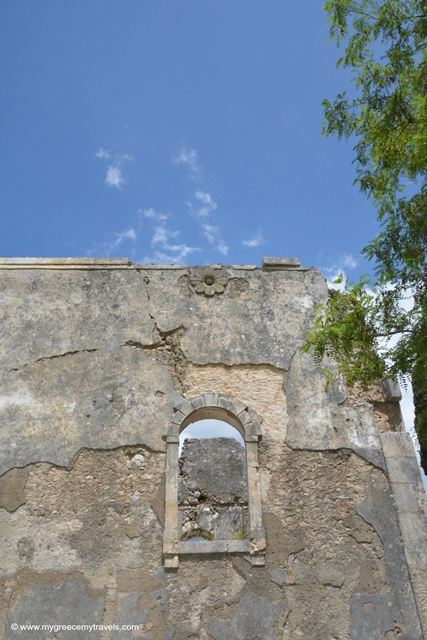 Exploring a Ghost Town in Kefalonia

We walked up past the church to a stone paved street. I could easily imagine the street once bustled with village life.

Overgrown brush and tree branches poked out of misshapen holes and crevices.  We carefully stepped between the wild plants and pointy twigs. In the process we found some small paths, little streets that once zigzagged between the houses. We stepped through old doorways. We climbed stone steps overgrown with moss. 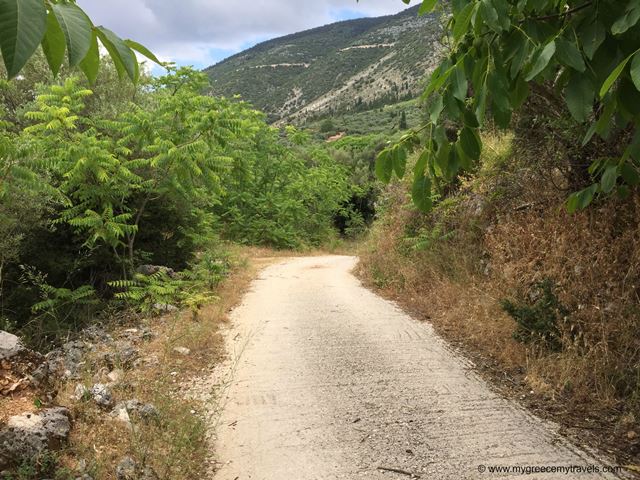 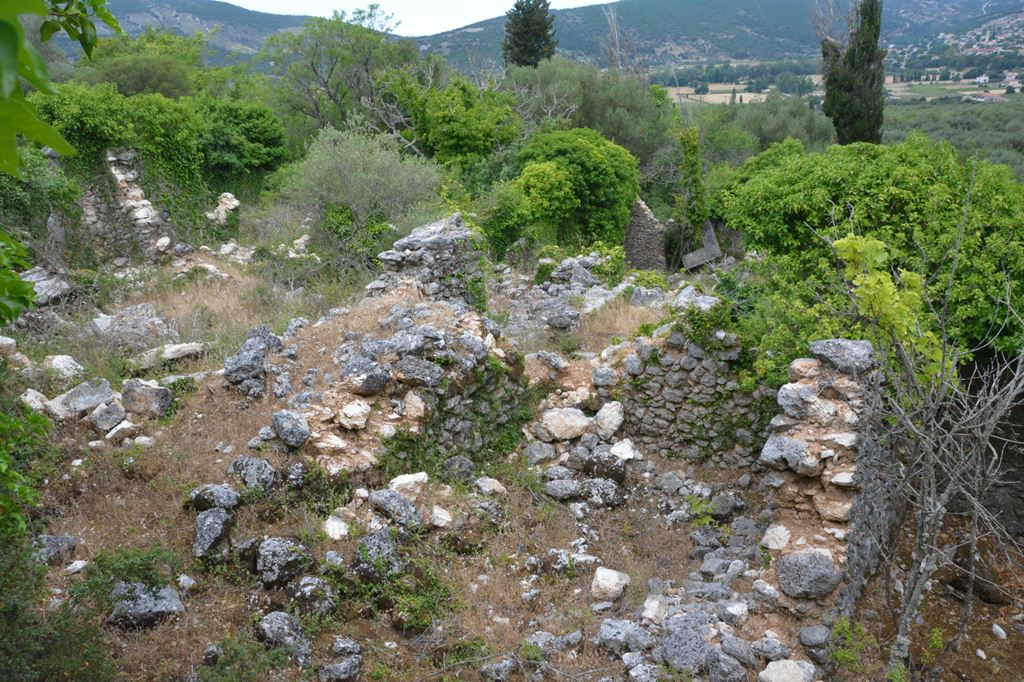 I could easily make out what were once bedrooms inside the homes.  Stef pointed some stone structures that were used to press grapes and olives. Rusty remnants of tools and appliances were scattered in the overgrown grass.  We even spotted a working well where the villagers once got their water supply. 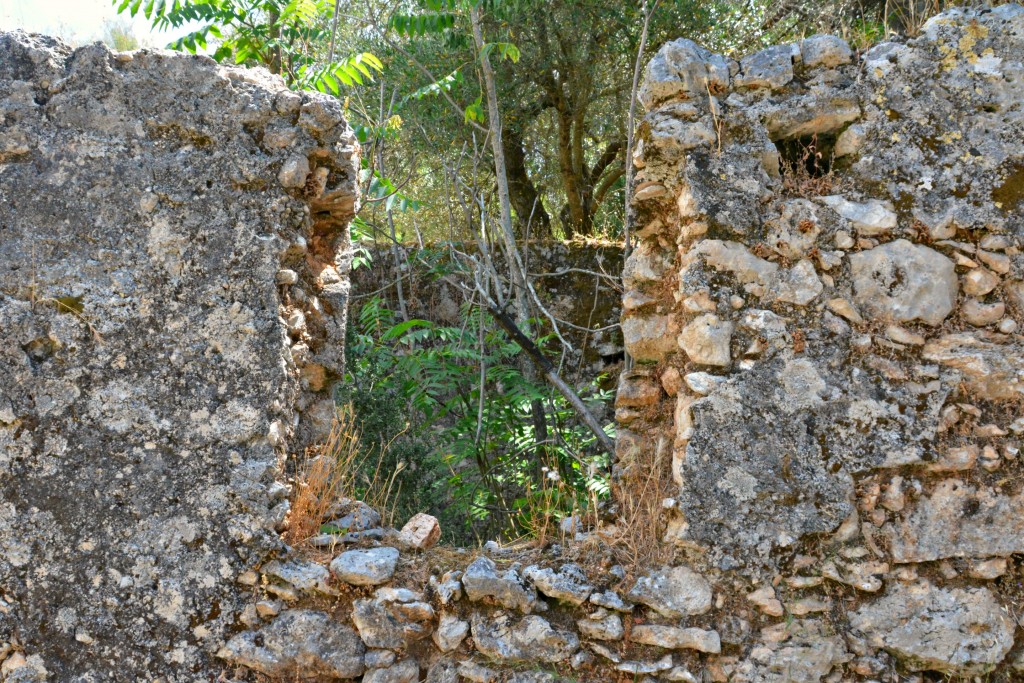 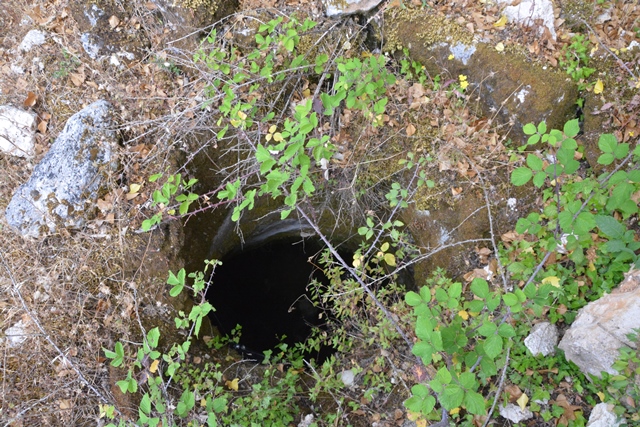 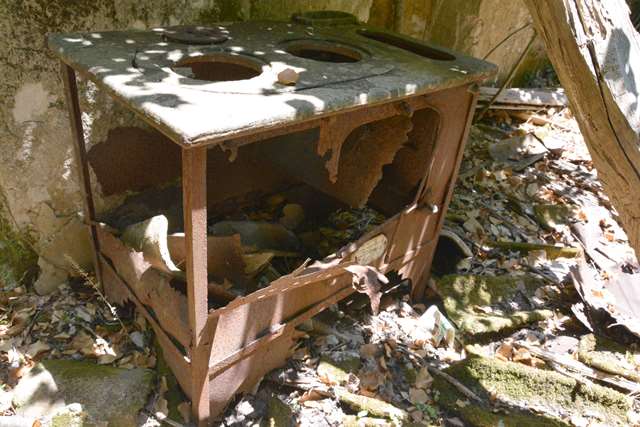 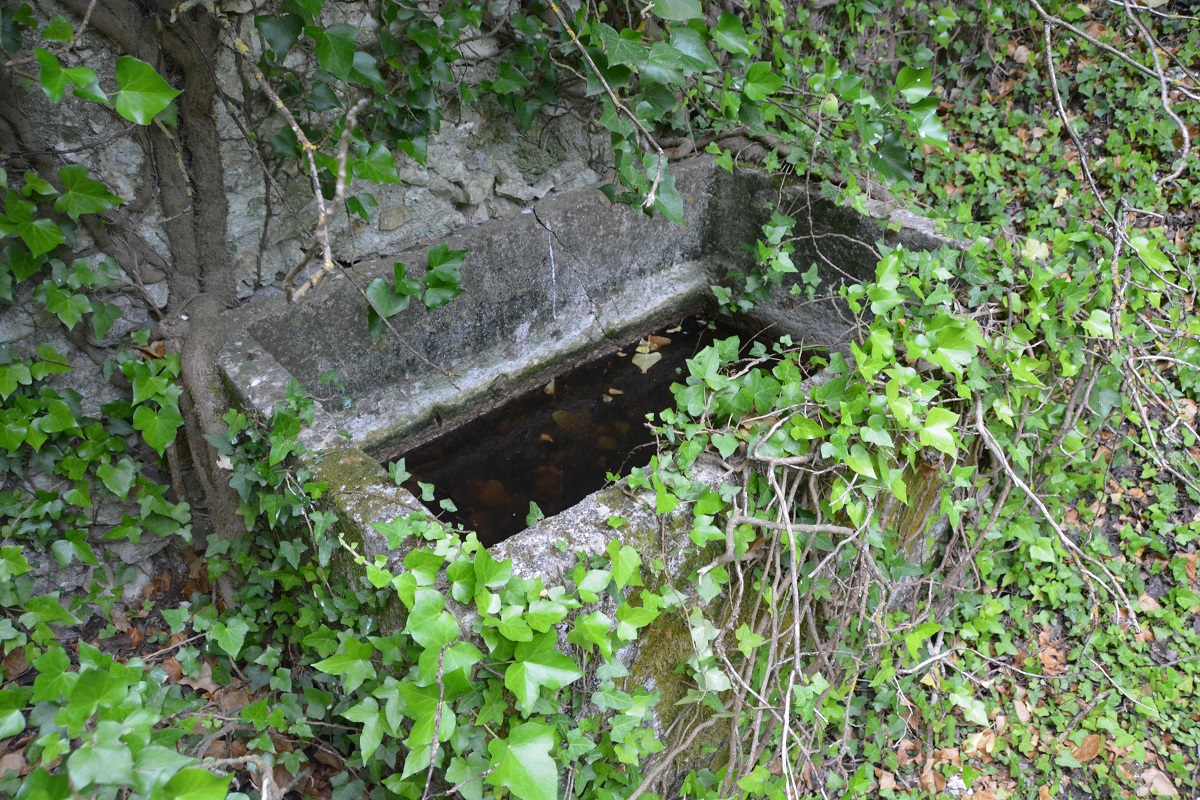 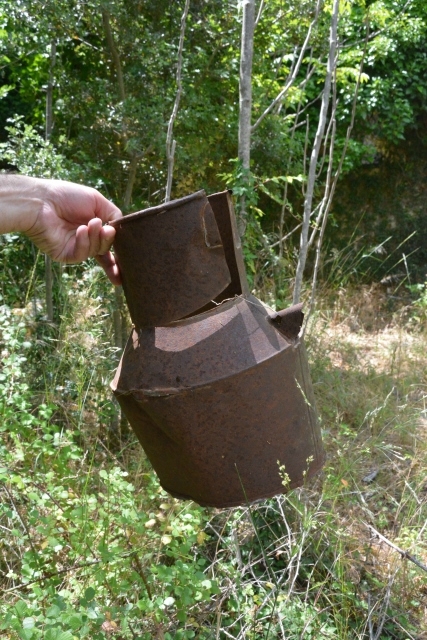 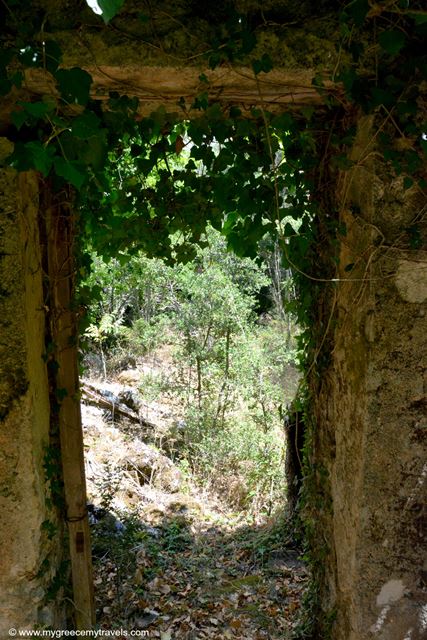 We were taking a hike through a ghost town. Our footsteps crunching on weeds and the sounds of birds, crickets and cicadas made the only sounds. At one point, we walked up to a clearing where a view of  the “new” Valsamata opened up before us. 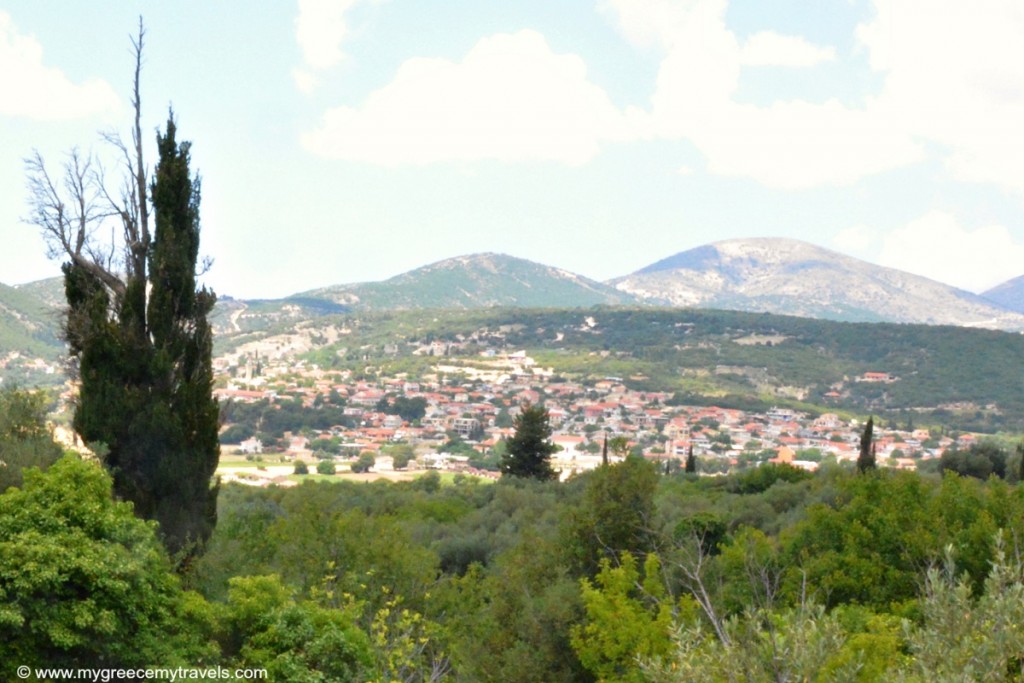 Greece is one of the most earthquake prone counties in Europe. Kefalonia lies very close to a major fault line, similar to the infamous San Andreas Fault.

A series of earthquakes caused the destruction on Kefalonia in the summer of 1953.   The largest earthquake had a magnitude of 7.2 on the Richter scale. Out of the population of 125,000, more than 600 people were killed those days. Beautiful historical buildings were destroyed. The aftermath also led to much poverty.  Much of the population emigrated for better lives in America, Australia and South Africa. 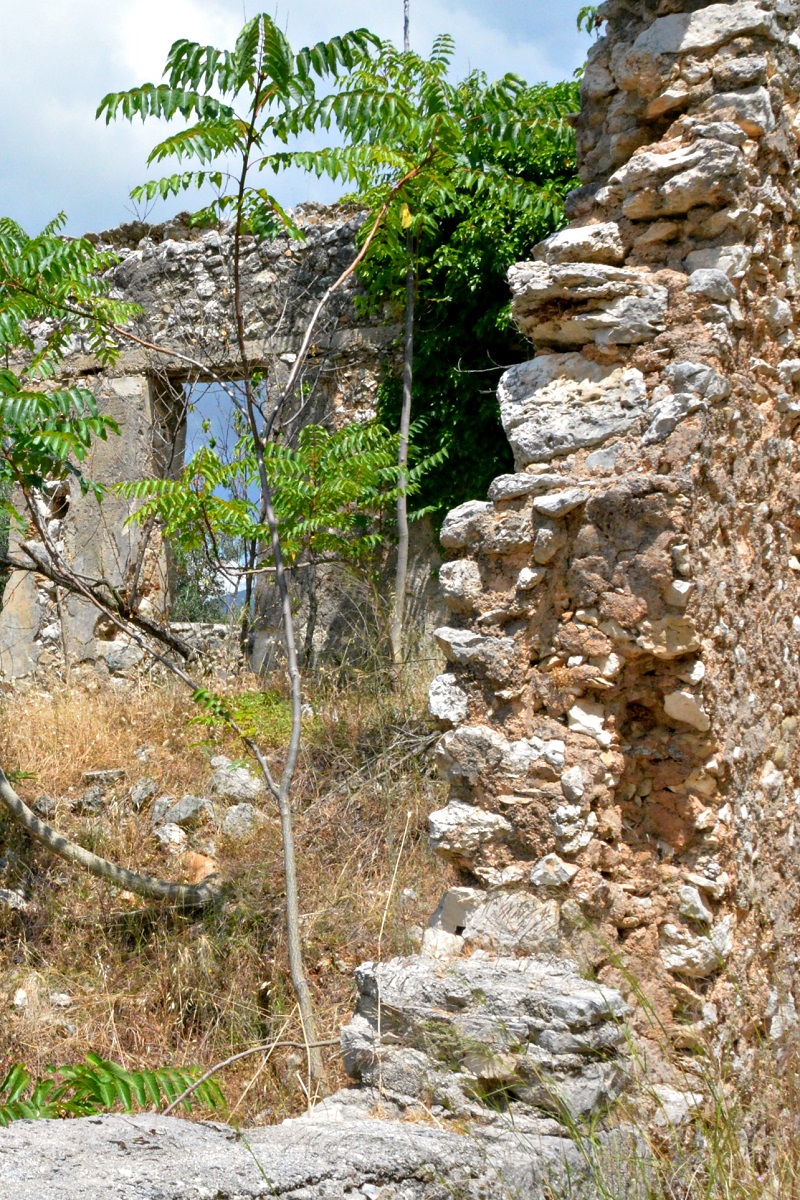 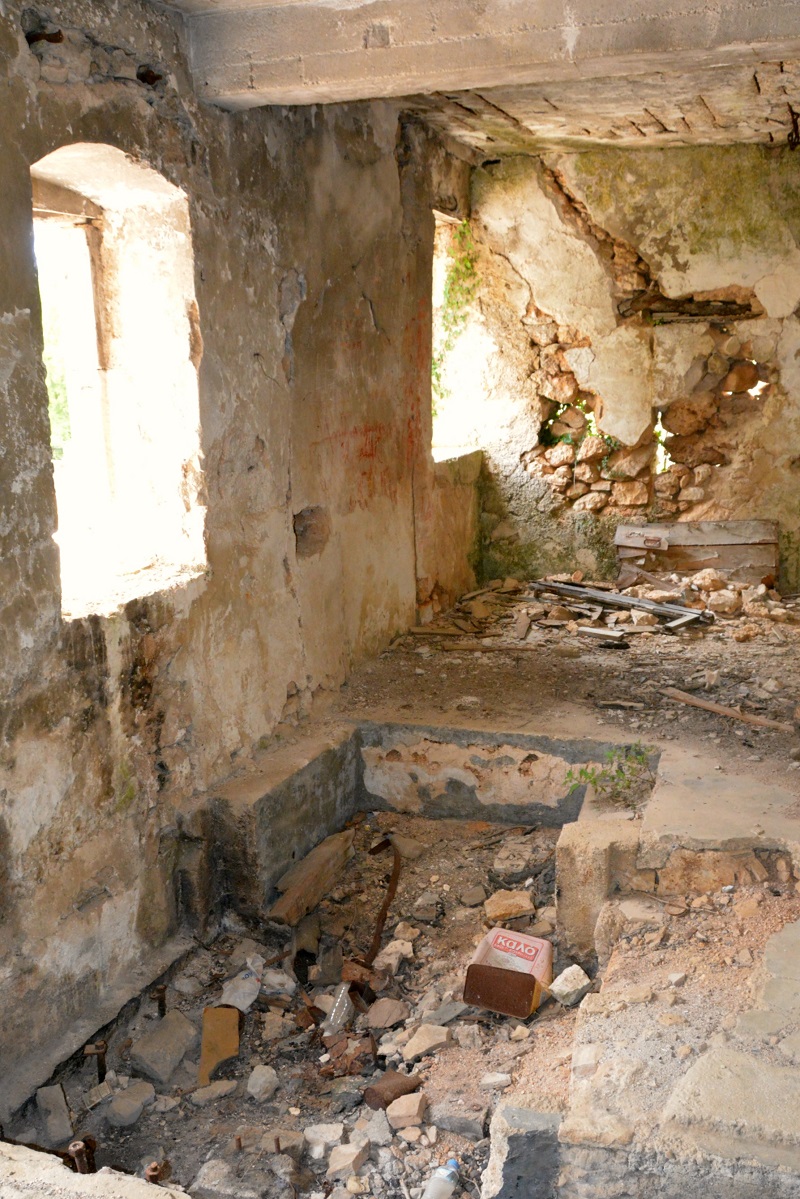 Visit the Earthquake Villages of Kefalonia

You can visit Valsamata and many of the other abandoned earthquake villages of Kefalonia on your own.  They are pretty much an “open book” for you to explore.  They are an interesting way to glimpse into the history of Kefalonia and its people. 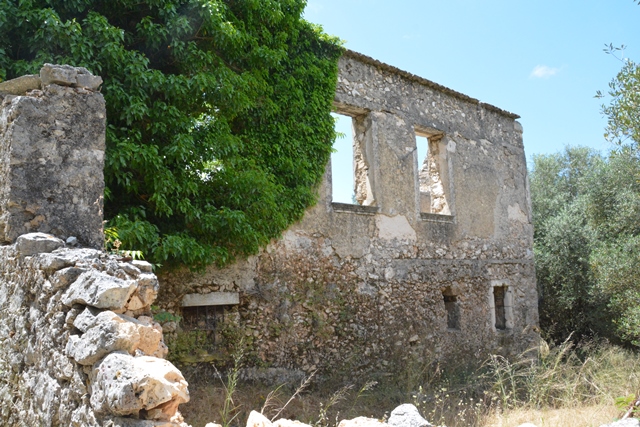 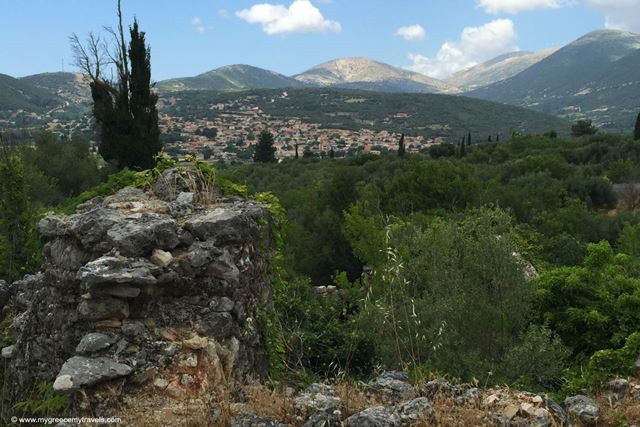 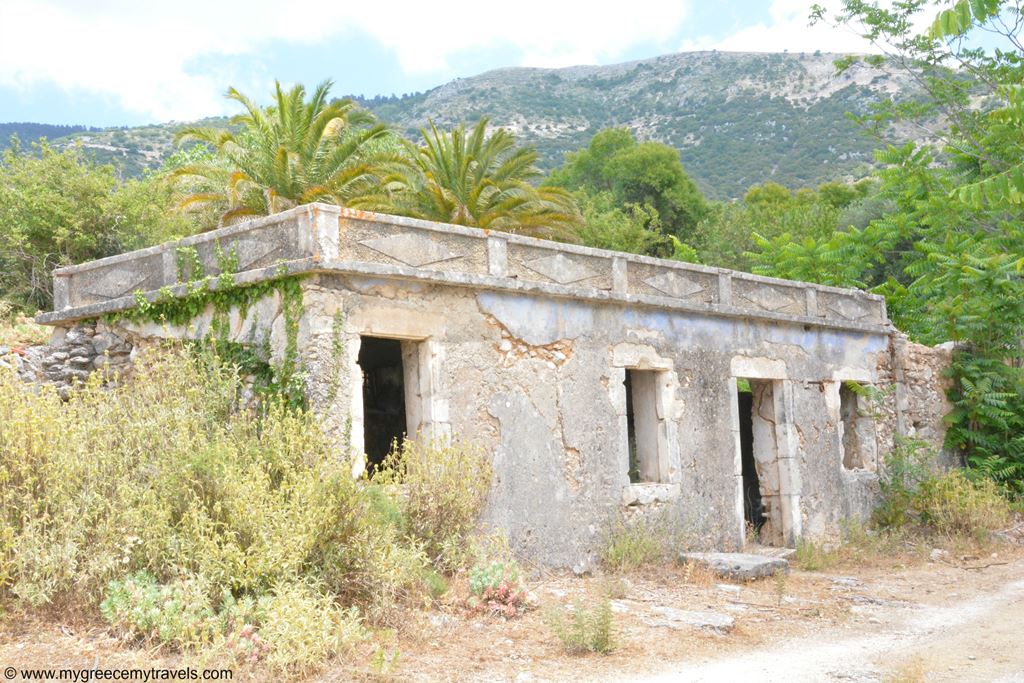 Where to Stay on Kefalonia

The villages that line the coastline offer a more charming country feel. Some are quite close to beach. These areas include Fiskardo, Katelios, Lassi, Lourdas, Skala and Svoronata.

If you are looking for a secluded yet beautiful property with fantastic views and close to a gorgeous beach read my review on the Petani Bay Hotel.

What to Do on Kefalonia

Tours I recommend on Kefalonia:

For more about my travel adventures, visit my Kefalonia mini-guide on this blog. 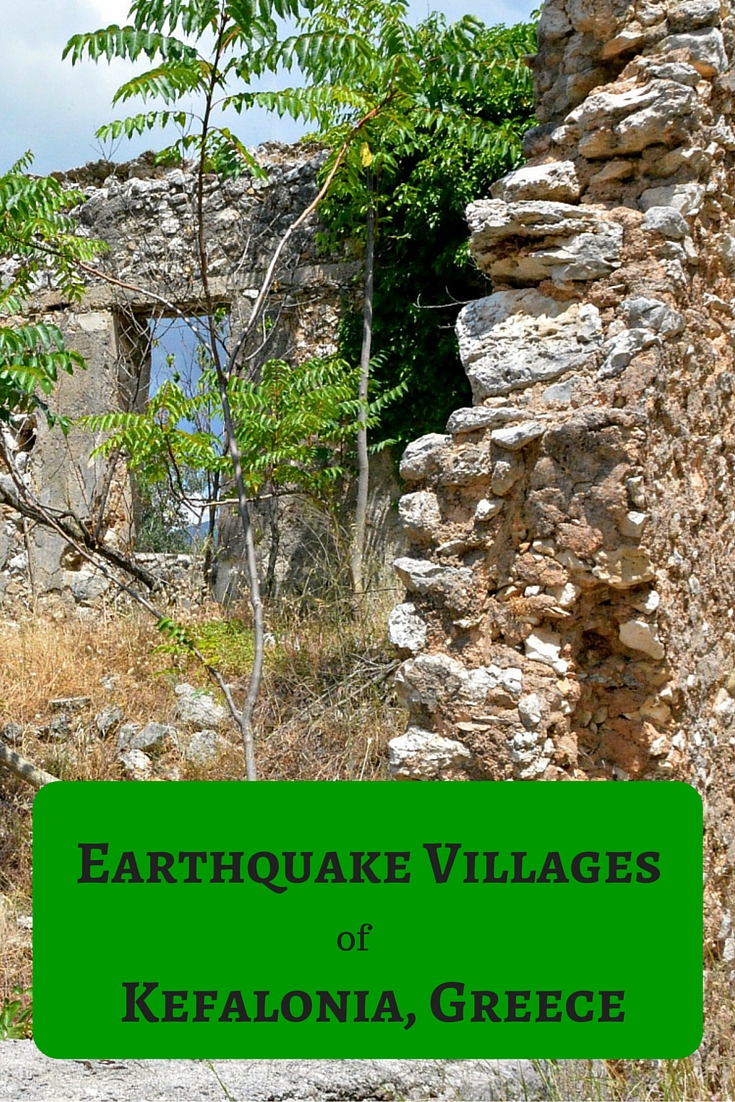 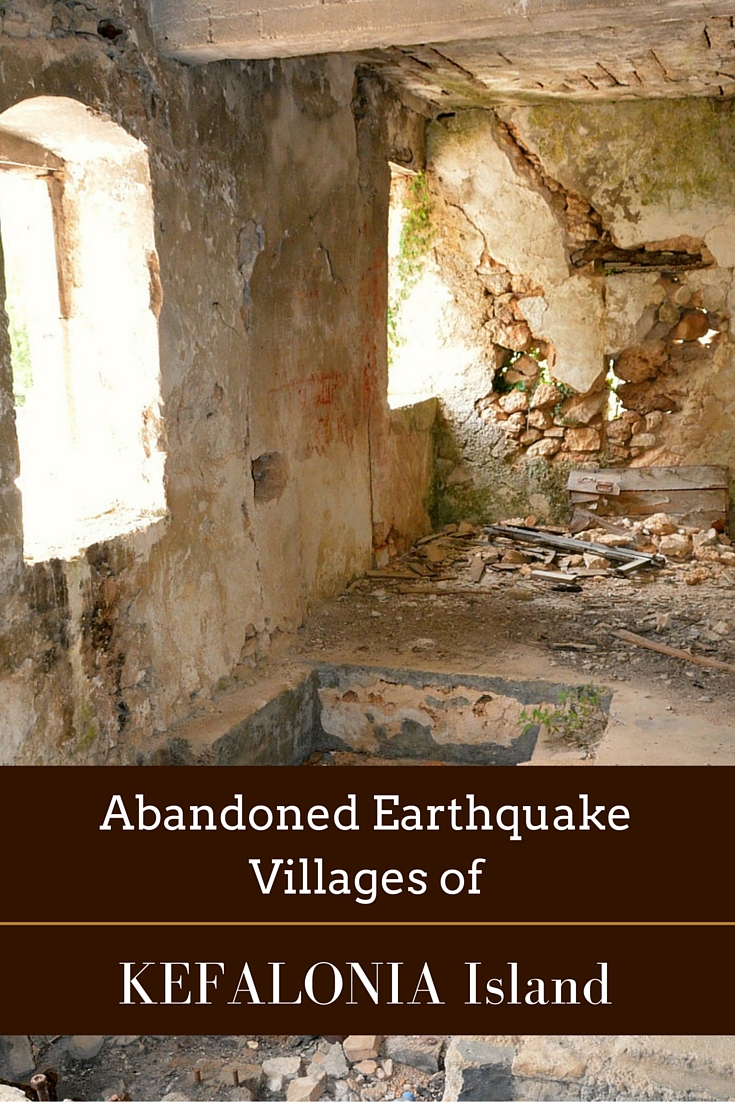