The simple, slightly curvy, sea-facing road that fronts Herceg Novi is unassuming.  If you don’t pay attention, you can easily drive right out from the vicinity of its fantastic old town that looks down on the sparkling Montenegrin coast.

Looking back, I thank the GPS. It announced we had arrived. We were ready to find the town and explore. My sister and I had just driven down from Dubrovnik, and we had a few hours to spare before we would continue our tour of the coastline.

Without any signs in sight, we headed up a little stone stairway figuring we’d find our way or just “get lost.”  In the process we discovered picturesque, quaint and lovely places that early summer morning.  Sturdy, grey stone buildings lined the stone paths.  In the midst of all the artful monochrome stonework, colorful shutters and doors seemed to pop with soft colors.  Tumbling green vines flanked the walls we passed.

Various historic eras led to occupations that blended diverse and picturesque architectural styles. Small flights of stone steps and tiny paths led to little squares where a small church would be standing, a town centerpiece worn with centuries. Mimosa trees offered shade along the way. 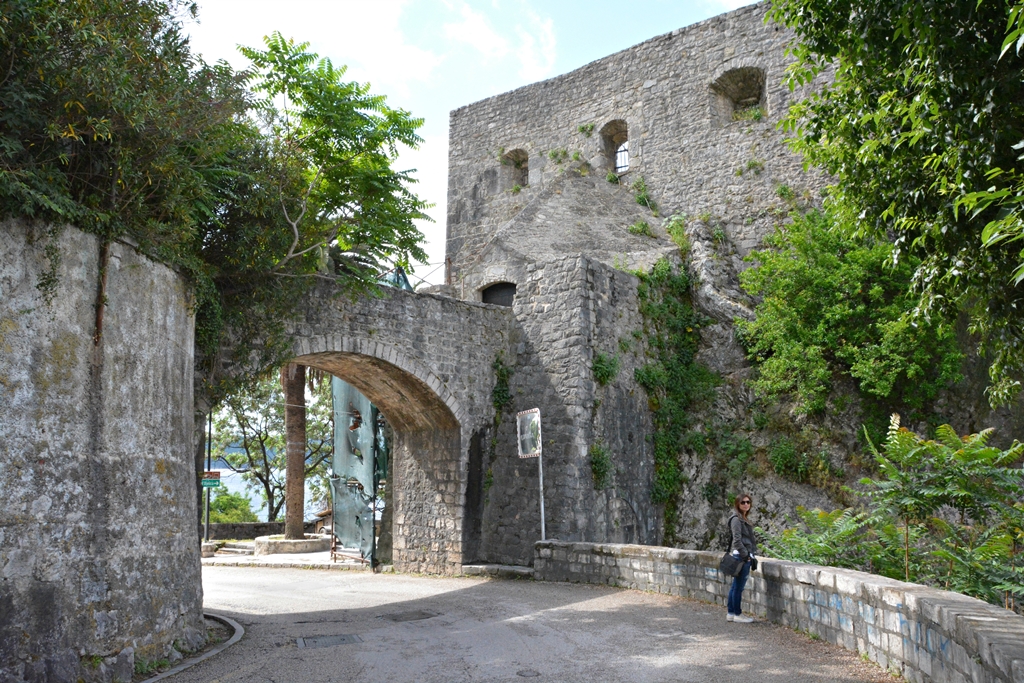 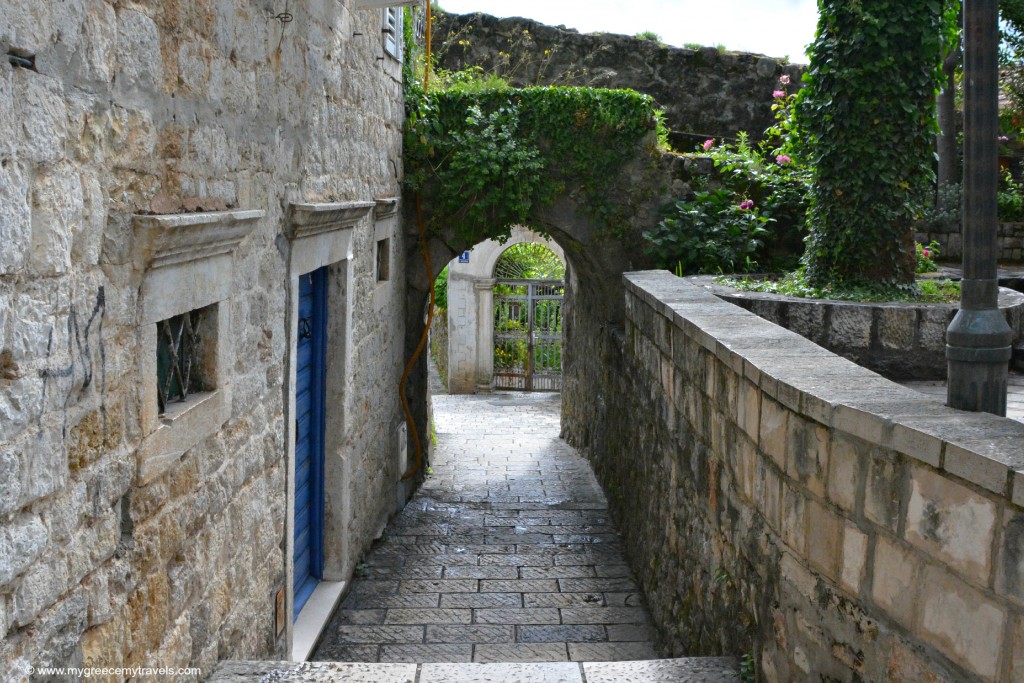 I loved the pathways around Herceg Novi

Gorgeous, sparkling sea views spread out before us during our experience.  Herceg Novi sits at the entrance to the Bay of Kotor and at the foot of Mount Orjen, so the views at your disposable are truly fantastic.

What’s Behind the Name

Part of the town’s name, novi in Montenegrin means new. It is considered one of the newest towns on the Bay of Kotor, well in European history terms. It is actually 600 years old.  The other part of the name herceg means duke and refers to Herceg Stjepan Vukčić who built the fort in the 15th century. 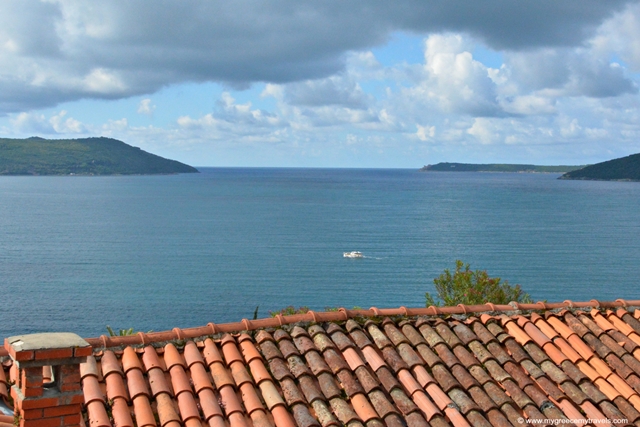 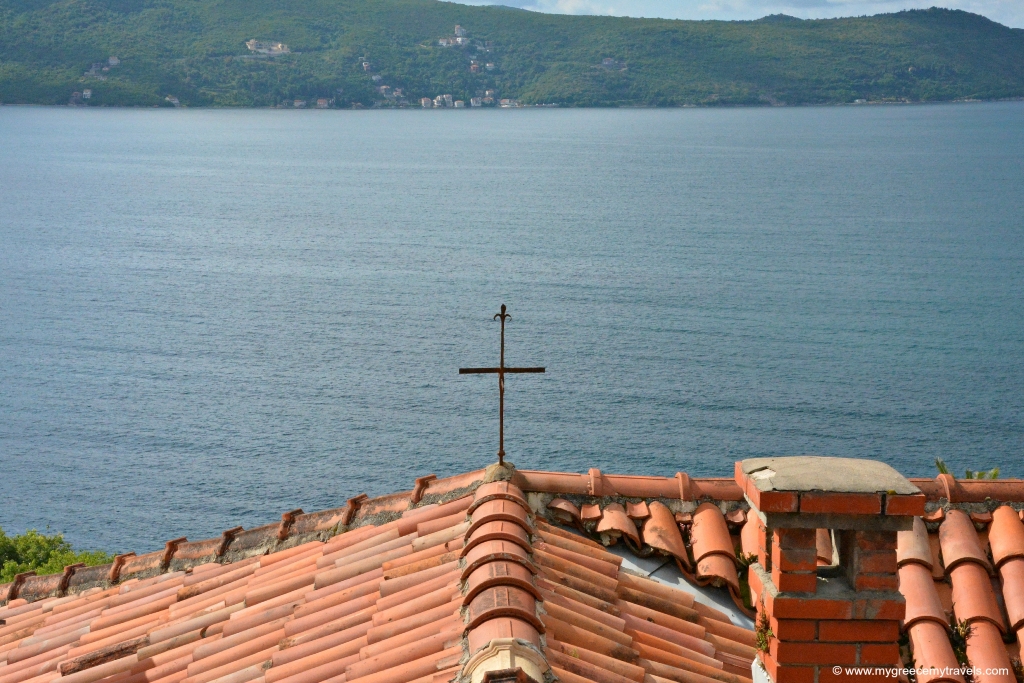 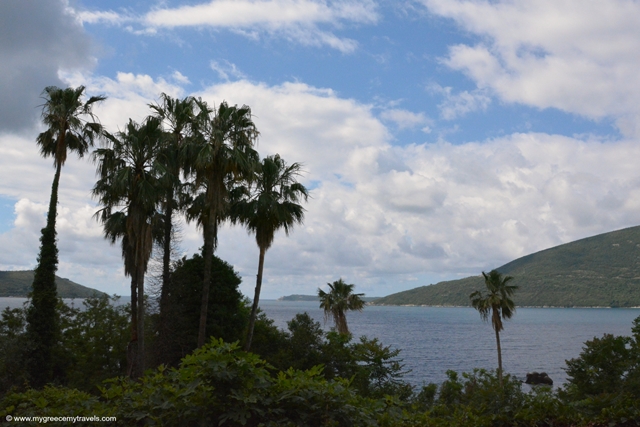 An exotic scene in Montenegro. 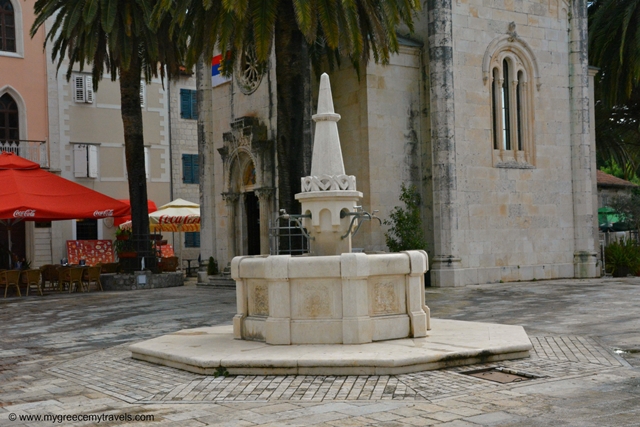 A fountain in Herceg Novi. 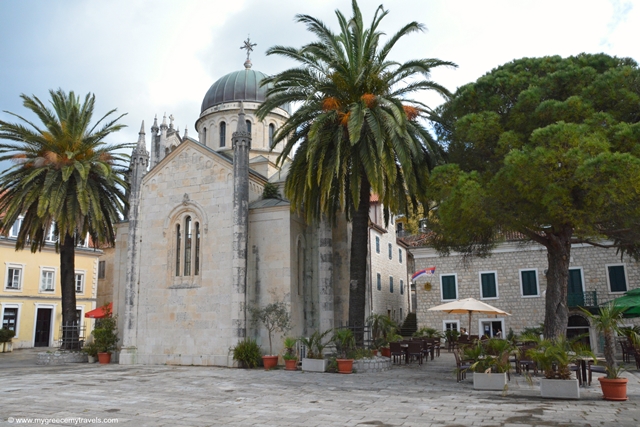 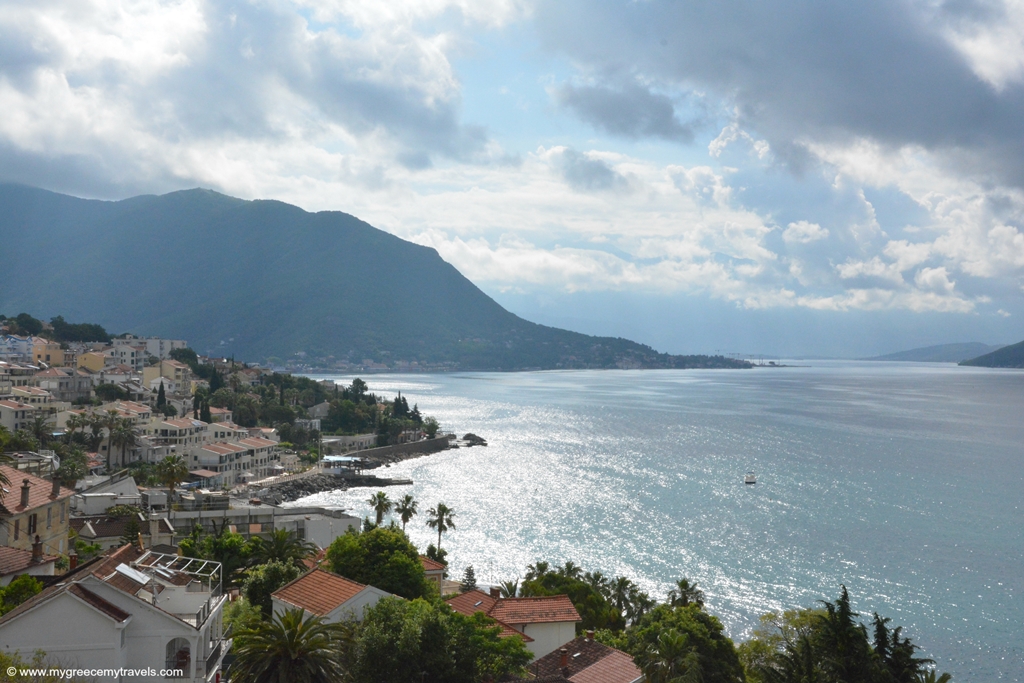 Check out the pedestrian-only section of ul Njegoševa. It was made with the same marble as Dubrovnik. Pretty, 19th-century buildings line the way.

Cafe-ringed Trg Nikole Ðurkovića sits under the steps that lead to an elegant crenelated clock tower (1667) that was once the main city gate.

We enjoyed having a quiet coffee at the domed Serbian Orthodox Archangel Michael’s Church, built in 1883. It is picturesquely flanked by palm trees.

There’s a Catholic church further down the hill. St Jerome’s, built in 1856, is the centerpiece of Trg Mića Pavlovića. 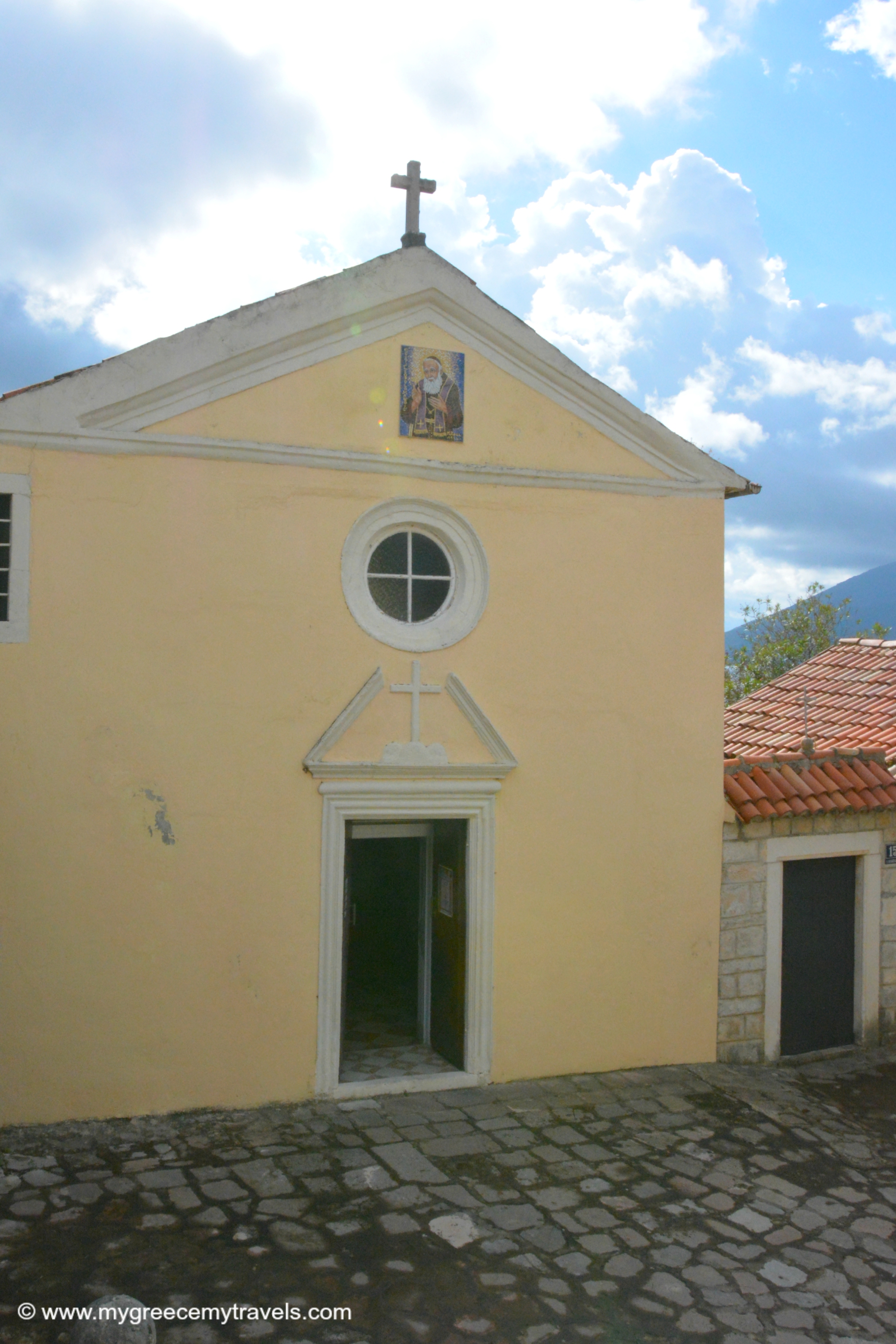 A church in Herceg Novi. 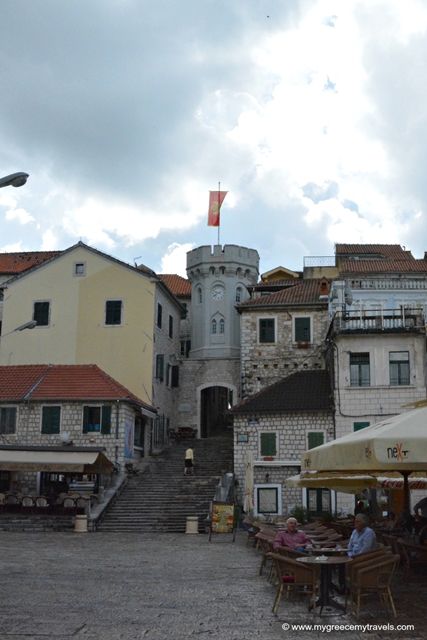 From 1420 to 1800, Herceg Novi was known as Castelnuovo which means new castle in Italian. It was part of the Albania Veneta of the Republic of Venice.

Herceg Novi is one of the youngest settlements on the Adriatic Sea.

We just had a few hours, so we didn’t explore as much as we wanted.  I know I will be back because I simply love exploring the Balkans – one of my favorite places in the world. 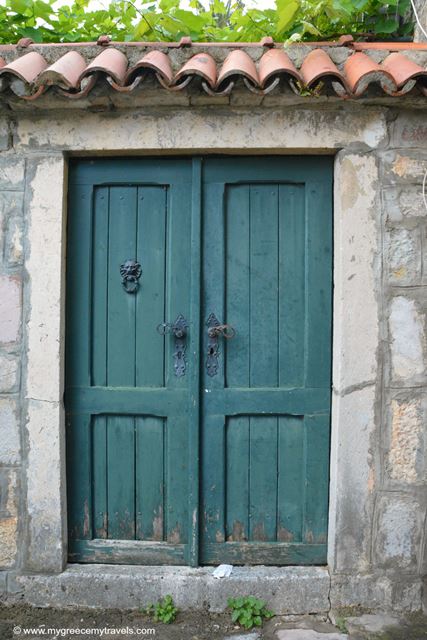 Have you ever visited Herceg Novi?