Wandering through Pompeii’s ghostly ruins  triggered my imagination.  What remained of Roman columns, cobbled streets and stone buildings – weathered by time -were clearly once part of a thriving and beautiful city.

Pompeii’s neighborhoods, restaurants, bars and brothels were part of an ancient commercial center that suddenly froze in time after a volcanic eruption smothered its population in 79 A.D.

Our guided tour group came upon many bodies, their forms frozen in time as a result of being covered under layers of burning pumice stone.  That unfortunate volcanic event was exactly why Pompeii became such a precious archaeological find when it was uncovered in 1865. Much of what was left behind — remains.  Mount Vesuvius didn’t blow away what was, it buried and preserved. 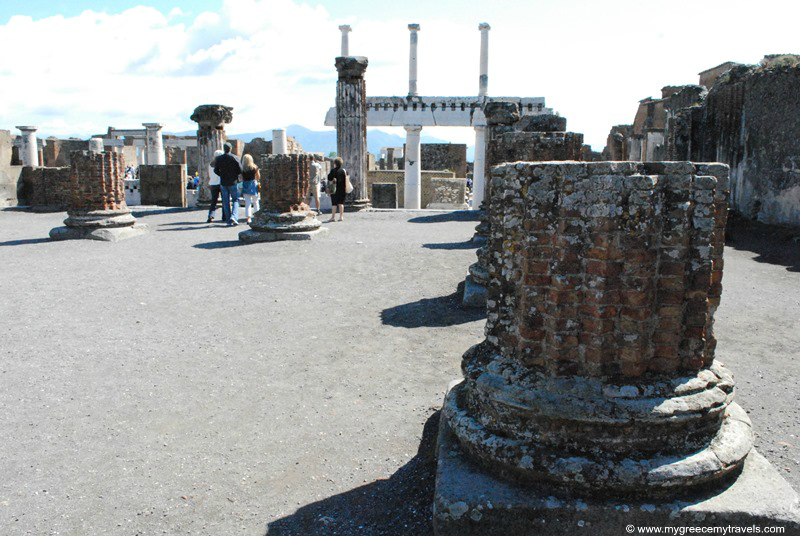 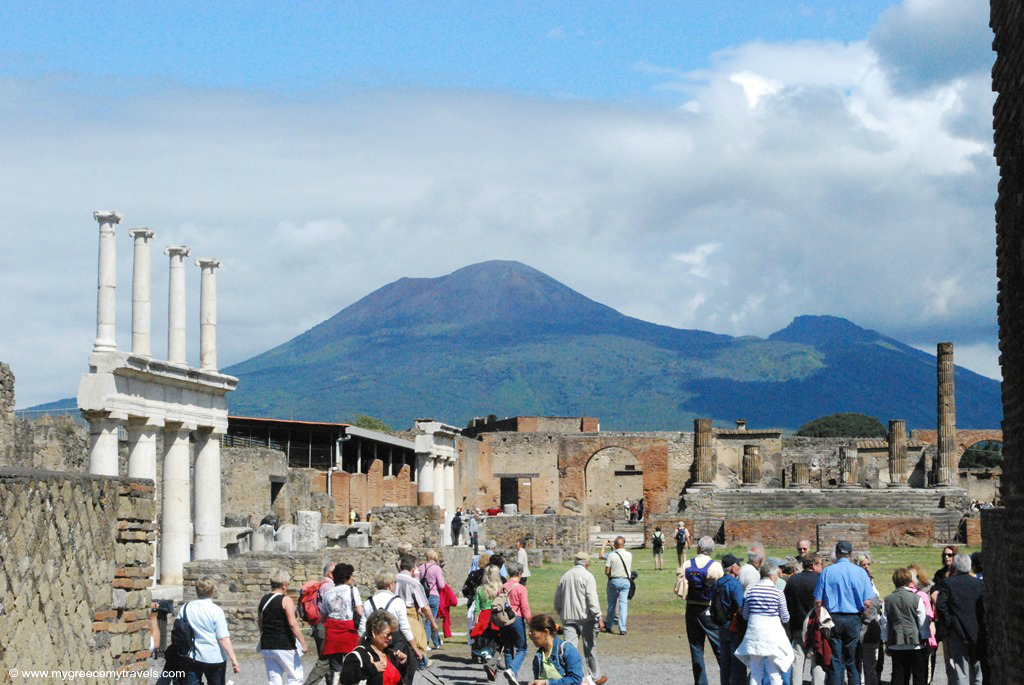 We walked through an organized city plan of streets and neighborhoods where the remains of an irrigation and sewer system could still be pointed out. 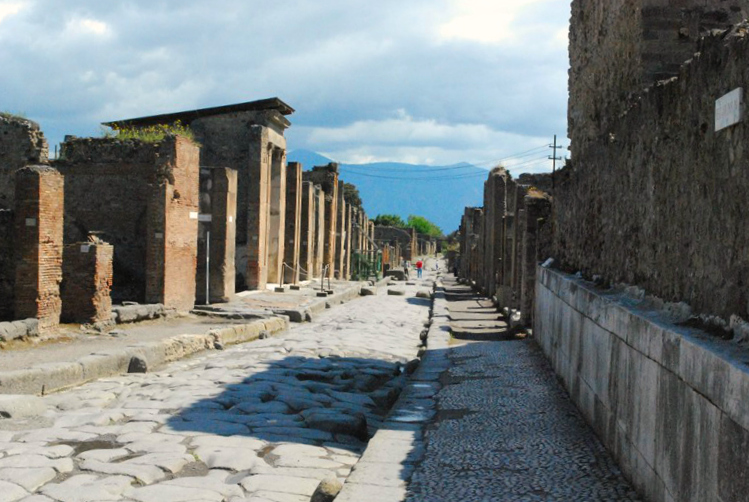 Then we headed to another facet of Pompeii life — the ancient lupanar or brothel.  Erotically graphic paintings remained visible from so long ago. 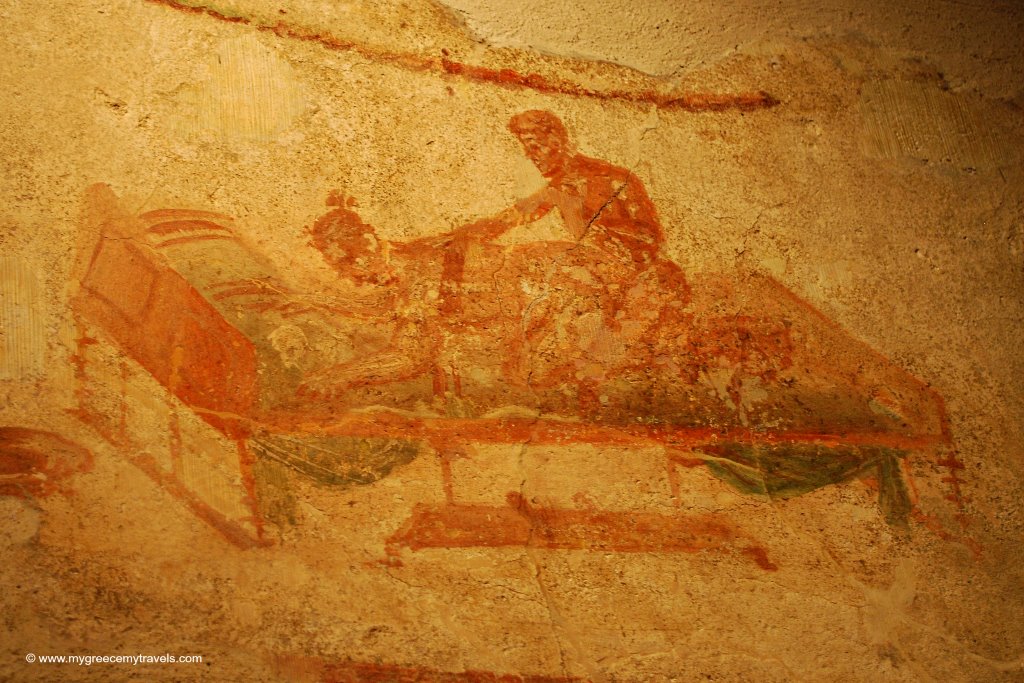 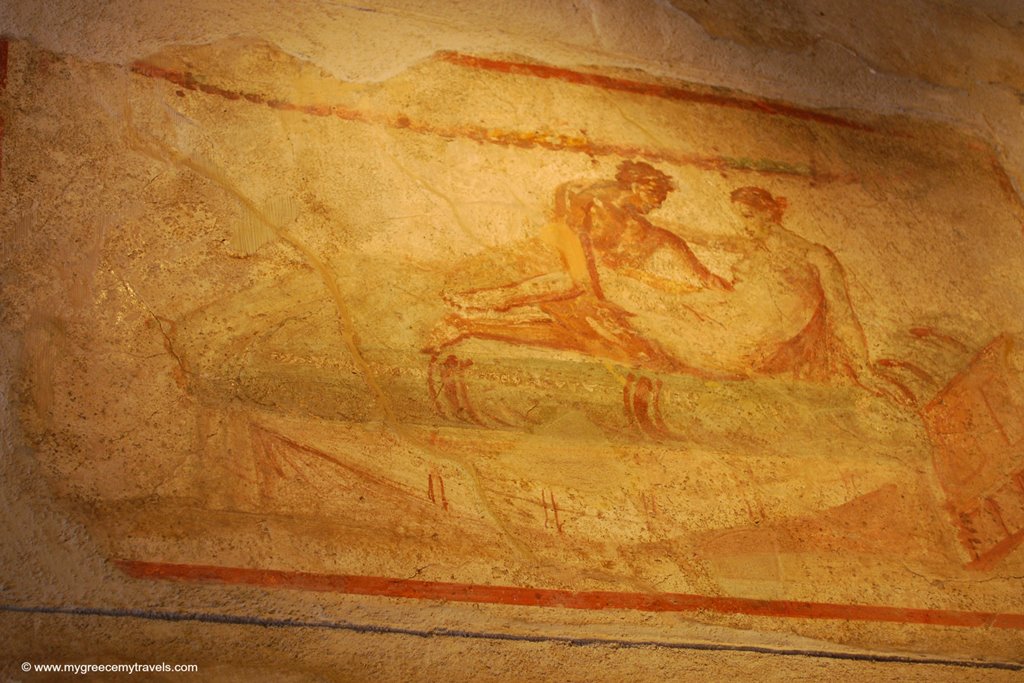 Some of the art made it into private collections but many paintings adorned the walls above the prostitutes’ stone beds that were carved into the walls. 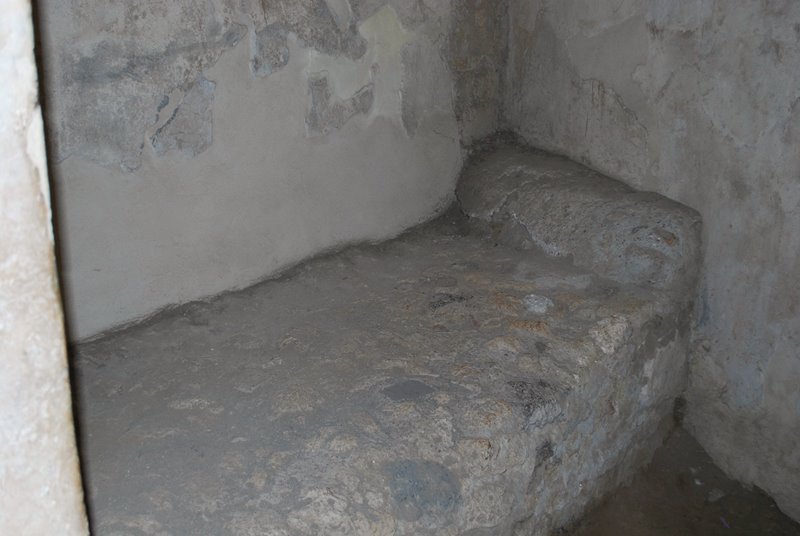 Our guide explained that perhaps the art easily displayed a sort of sexual menu. Another theory: themed décor.  Well, it was a trading town and people crossed in and out of it all the time including sailors and travelers. 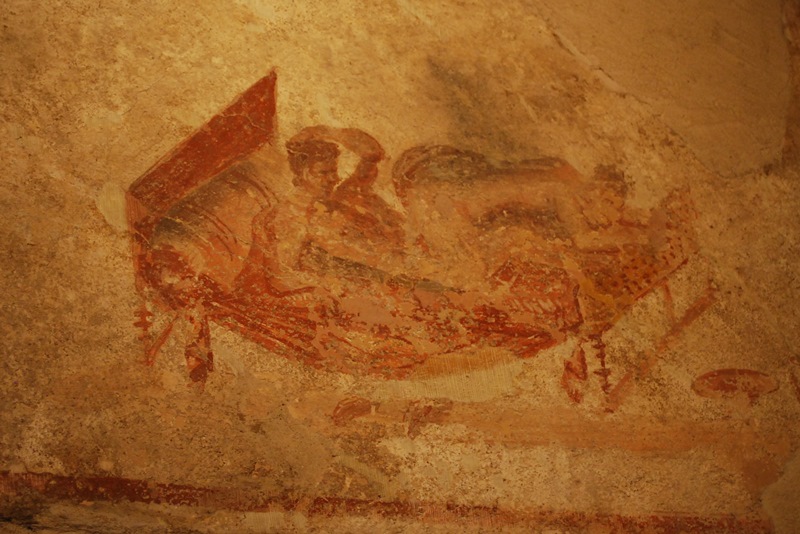 Menu of some sort?

I found the idea of the bawdy graffiti quite interesting.  People never change, really!  A few sayings of what folks were scratching on the walls back then were pretty entertaining.   Our guide had a few to tell us about.  Here were a few scribbled on the walls of the brothels:

“Gaius Valerius Venustus, soldier of the 1st praetorian cohort, in the century of Rufus, screwer of women”

House of Cosmus and Epidia: “Aufidius was here. Goodbye!” (classic but boring)

Atrium of the House of Pinarius: “If anyone does not believe in Venus, they should gaze at my girlfriend” (aww)

Bar of Athictus: “I screwed the barmaid” (that’s just boasting)

I grabbed the above translations from this site that lists a whole lot more.

Pompeii gave a glimpse into the classes at the time and it wasn’t any different from how societies still function. Elegant villas were constructed for nobility and there were beautiful homes for the middle class. The style of architecture, gardens and rooms were all there proving that some of the Pompeii community lived in amazing style — more than 2,000 years ago. 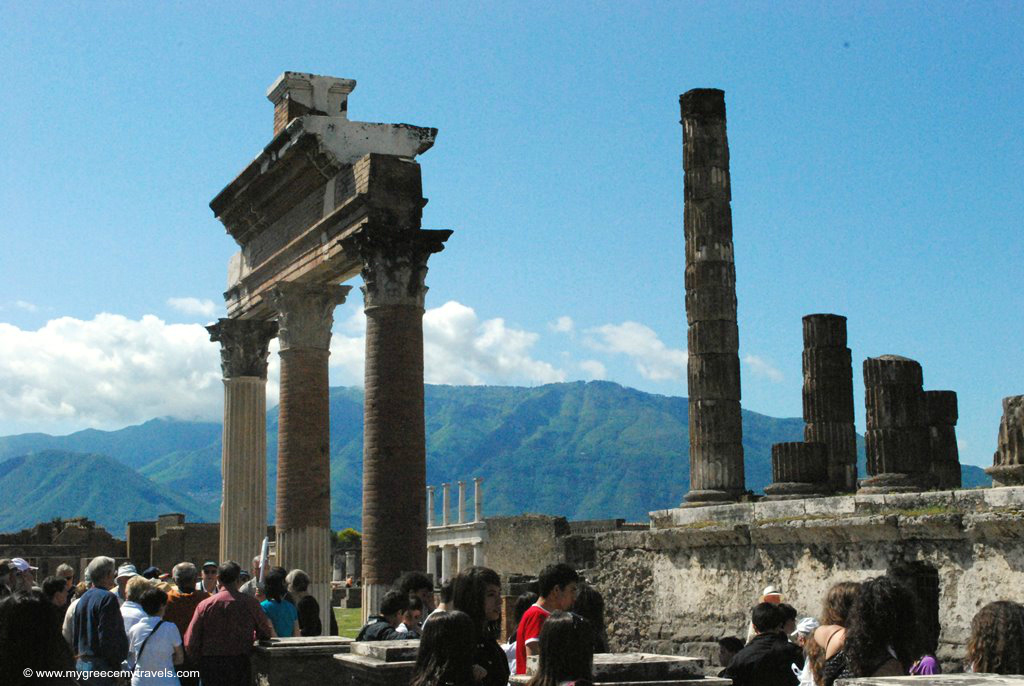 A city that was 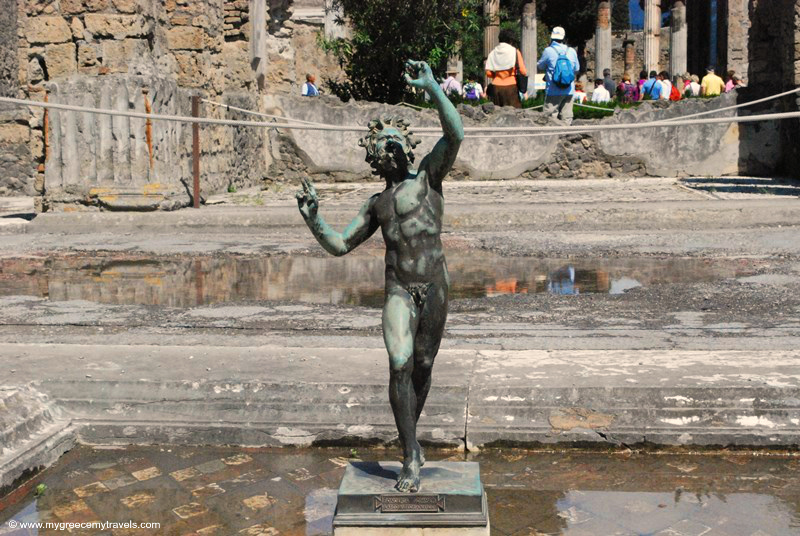 Once a centerpiece in a fountain

Modest houses took up the working class neighborhoods. Overall, what remained in-tact was fascinating:  furniture, ornaments, gold and silverware, kitchenware, tools, bronze and terracotta lamps.  Wandering around it was plain to make out where workshops and grocery stores once stood.  Check out this restaurant that had built in counters for serving hot food. 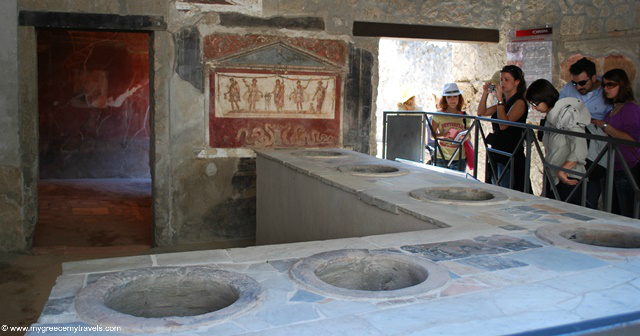 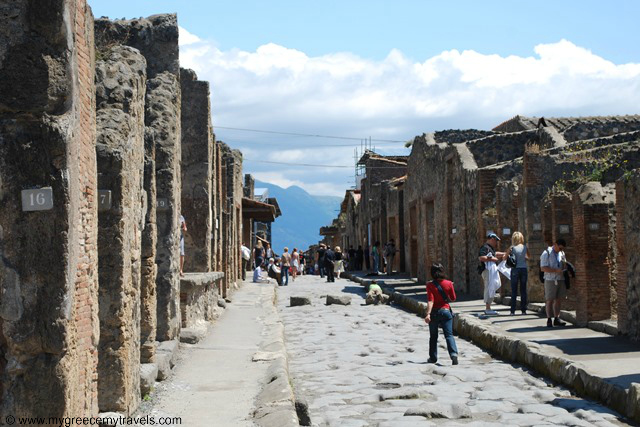 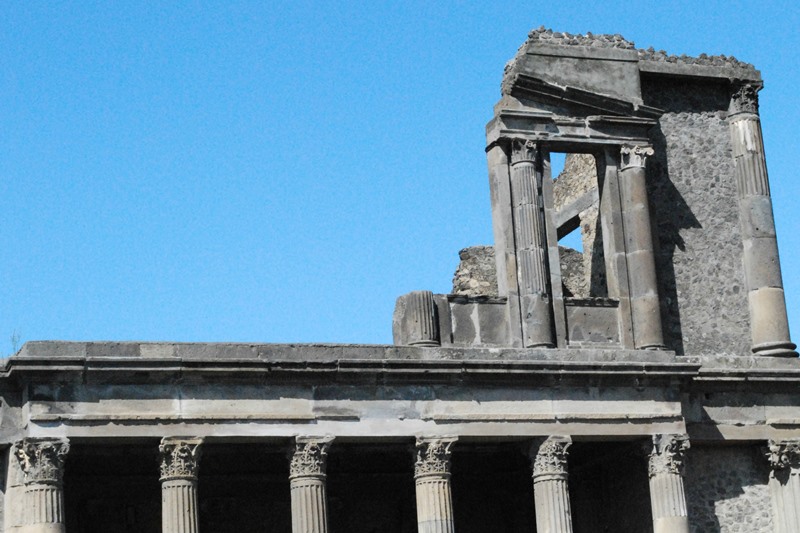 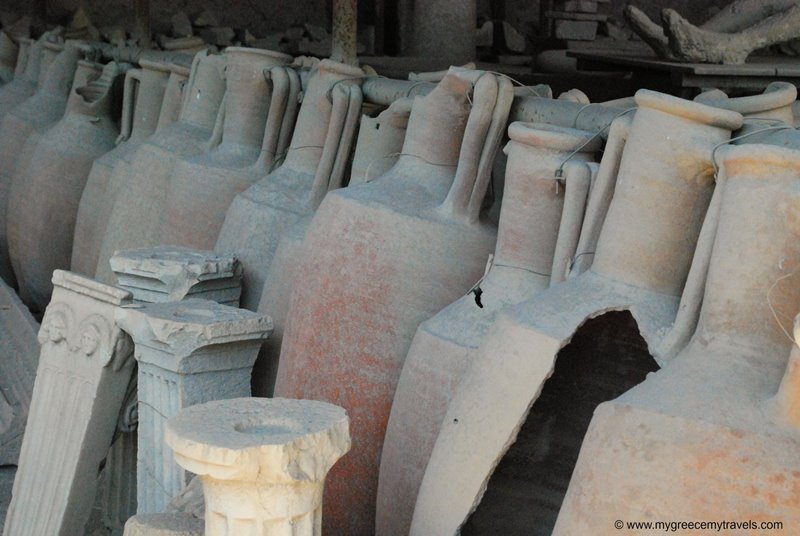 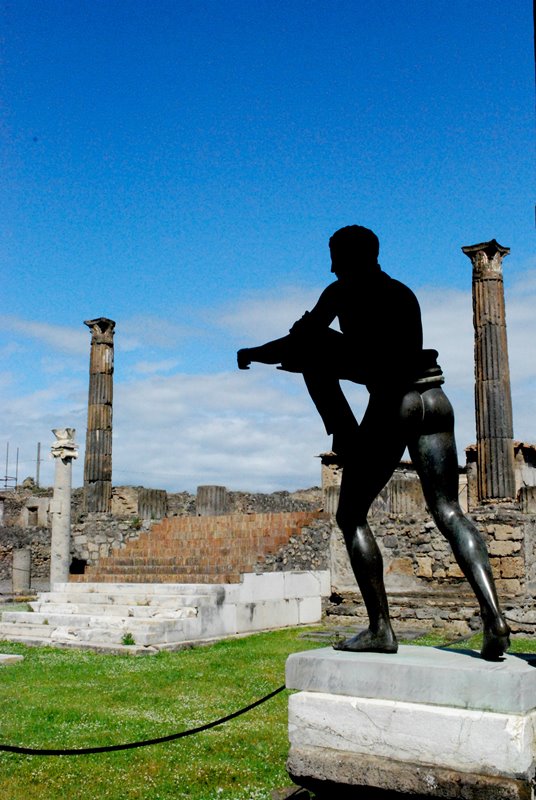 My conclusion? Pompeii is truly one of Europe’s most compelling archaeological sites and it was worth the train trip from Rome. It is one of Italy’s most visited tourist attractions attracting some 2.5 million people  each year.

It also made me appreciate the archaeological experience I had discovering Santorini’s archaeological site known as the Greek Pompeii.  Right after my visit to Pompeii I had the opportunity to explore another well-preserved ancient Roman city called Herculaneum. I’ll tell you about that in a future post.

Take a train from Rome to Napoli – 2.5 hours / Starting at 30 Euro round trip

Follow signs for Circumvesuviana.  Buy a ticket on the lower floor of the station.  / 2.90 Euro

Take the Sorrento line to the Pompeii Scavi stop – 20 minutes.  You’ll find signs for the entrance to Pompeii. 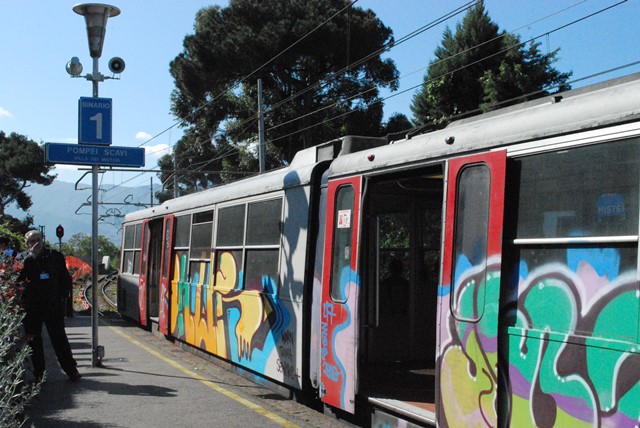 Have you been to Pompeii outside of Rome?  What did you find the most interesting?