Just looking out at the harbor in Laganas Bay was thrilling enough that morning. All shades of blue swirled before us. I wondered then if we would run into the endangered loggerhead sea turtle as we boated around the Zakynthos sea caves. I boarded a small boat with my fellow Greece-based bloggers to find out.  Our local hosts were ready to set off and so was our captain for the afternoon, a local named Stamatis. 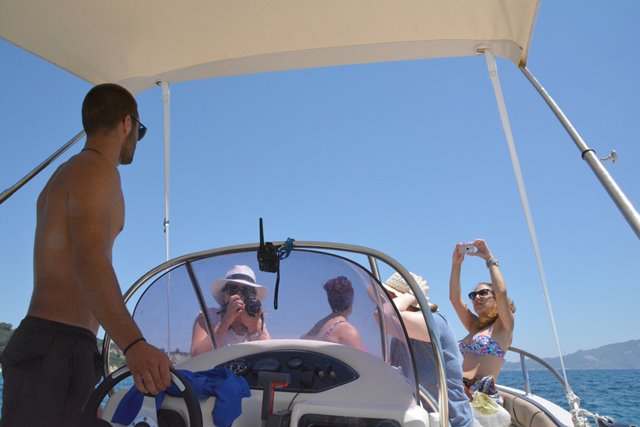 After fifteen minutes boating across the bay we came upon a sort of traffic jam.  Several other small boats were gathered around the endangered sea turtle known in Greek as caretta-caretta. 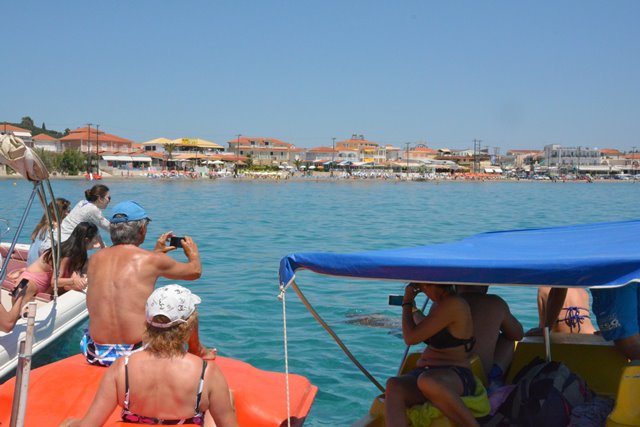 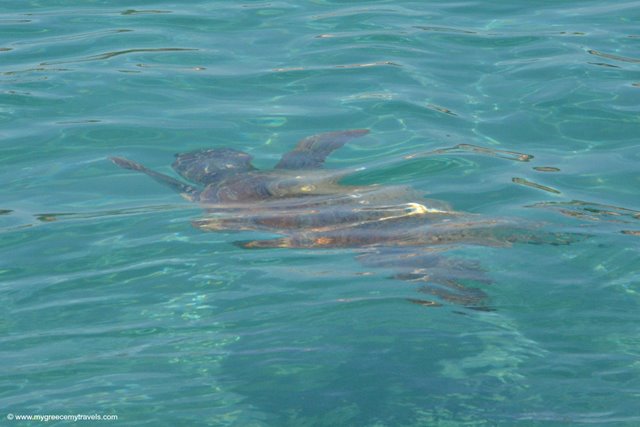 Greece introduced protective measures nearly 30 years ago to help save the endangered creatures that nest on Laganas Bay.

The boats crowded around the poor little guy.  It wasn’t little, but rather large and easily visible from our boat.  It came up for air a few times which led to a lot of excitement and awe.

I read some important rules you should remember if you encounter these beautiful creatures. You really need to keep calm first then:

A group of tourists also renting a small boat (on their own and without a Greek guide) jumped in the water to try to swim to it. Stamatis yelled for them to stop and threatened that he would call the authorities. We joined in on the scolding. The situation made me wonder if tourists really were told the protection rules or if they were told – if they even cared.

We didn’t stay long,  following the rules, thank God.  I didn’t like that we were crowding it after all. However, I must admit seeing the turtle in its habitat — just swimming along — was definitely an experience.  When the sea turtle’s little reptile head rose above water for a few seconds it was easy to see its unique bulging round eyes. He was probably wondering what all the fuss was about with those crazy humans. 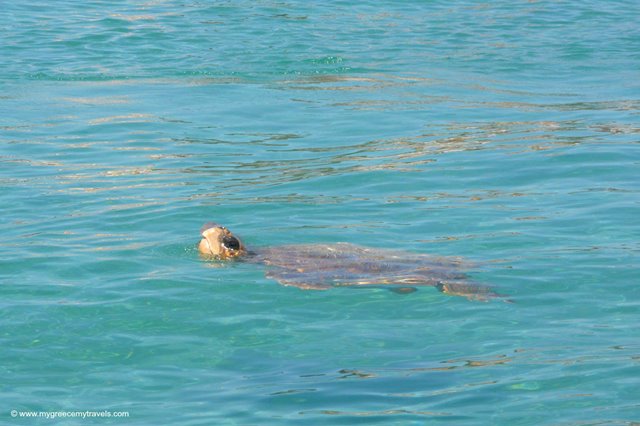 Excited by the lucky sighting we sped off to Marathonisi Island, a small uninhabited island where the Zakynthos sea caves awaited.

We whizzed past the shores of Marathonisi, a round rock of an island covered in green trees, sloping cliffs of earth and white colored rock.  Stamatis seemed to know every nook and cranny.  We stopped in a few heavenly little coves that seemed to come out of a dream.

We stopped for a swim at a little white rock beach with a few shallow water caves. It featured water so clear and temperatures that were perfectly cool and crisp in the hot sun.

I even saw a sea bar/beach bar/floating bar for the first time! 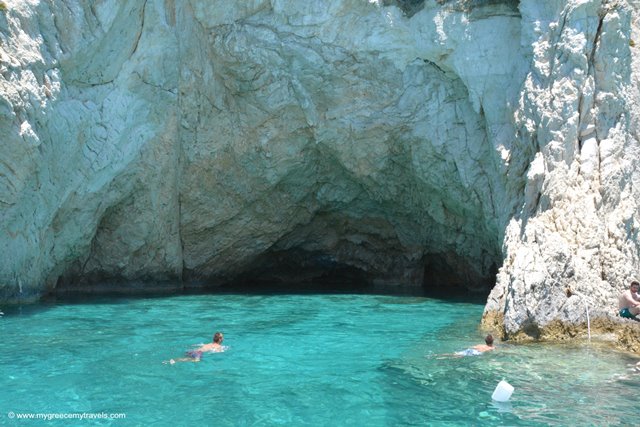 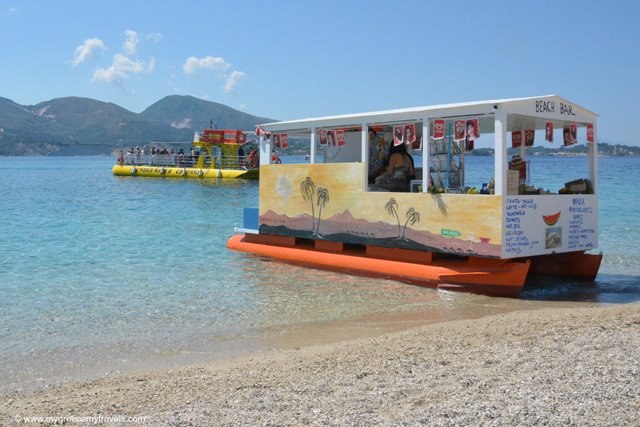 We stopped for a second swim right on a sandy beach on the island where the sea turtles famously lay their eggs. A section of the beach was roped off. A small office had some personnel on guard to make sure no one disturbed the site.  We learned the beach was off limits later in the day to protect the sea turtles.

Then we headed to the Keri Caves where small inlets, beaches and mountainous slopes seemed to melt down into the crystal sea water.

Stamatis drove the little boat into several caves that barely fit the small boat but once inside we admired how the blues shone with lovely shades, making us all swoon.

Each little cave was created over time by erosion of the rocky landscape and to make it even more special, the Mediterranean sun hit the sea inside creating a translucent kind of glow at times.

The boat puttered its way under the Kamares, two natural and impressive stone bridges that rise above deep waters that are so clear — you can see down straight into the sea floor. 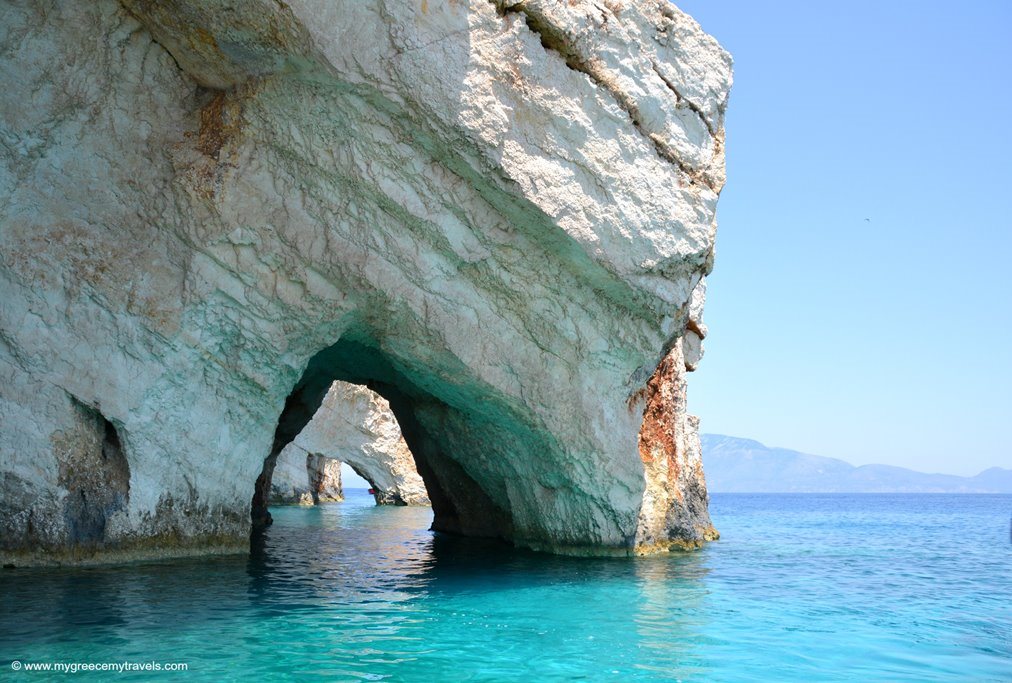 Around the Keri Caves 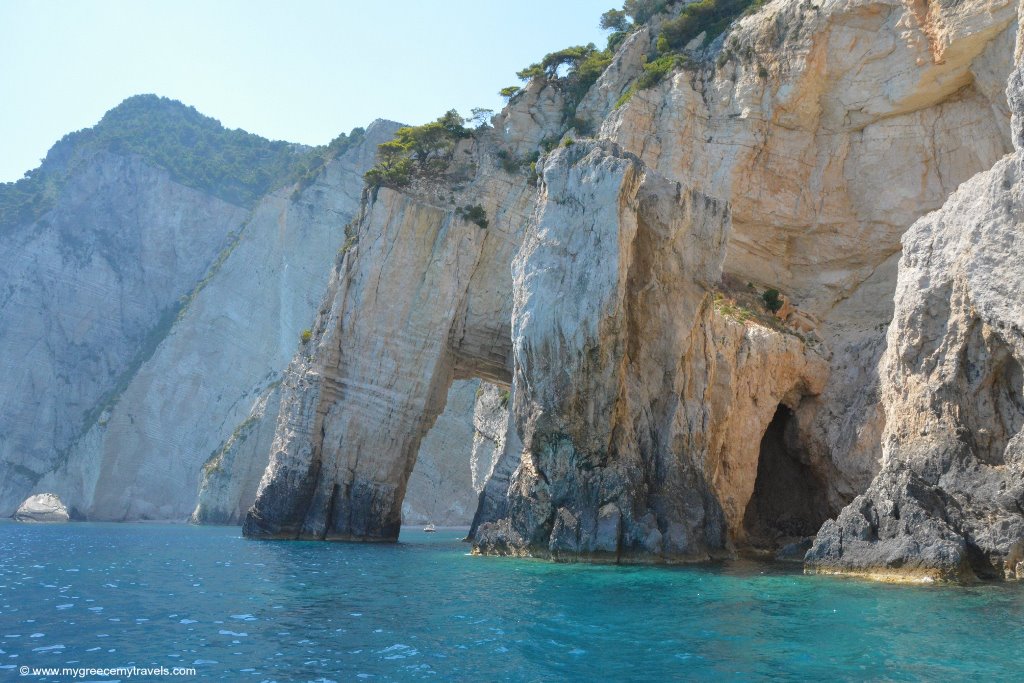 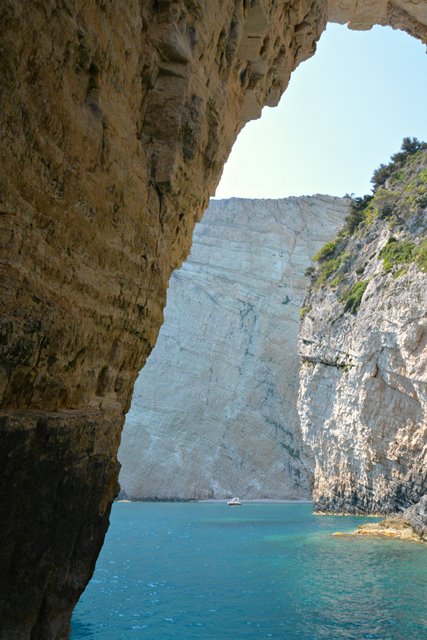 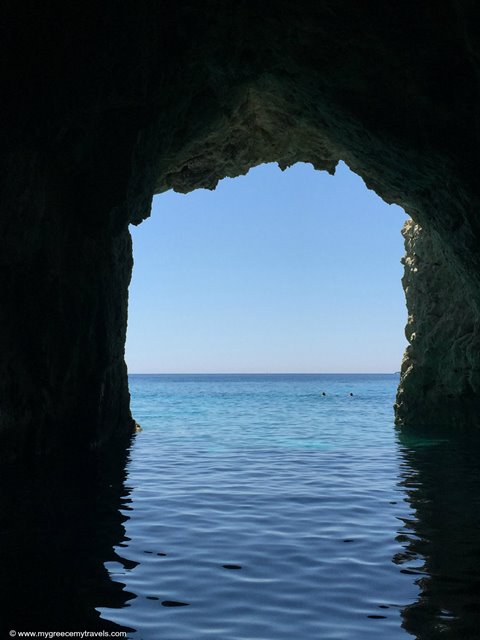 It was a beautiful ending to a full afternoon discovering the Zakynthos sea caves, turtles and perfect beaches.   I was so impressed by the island’s stunningly bright sea colors.

Taking the private boat tour certainly made the experience relaxing and personalized.  We headed out when we wanted, avoided tourist crowds that packed other large boats, learned from locals and had every question answered. As a result, we savored every minute of the scenery that we were loving without worrying about heading somewhere else.  We saw it all and saw it well.

Prices for a private boat rental start at 150 Euros for a group of five and a local captain, like Stamatis, to steer you in the right direction during the day starts at 30 Euros.  Highly worth it if you are traveling with friends, family or your significant other. Zakynthos should be the experience you want it to be. The nature is incredible. 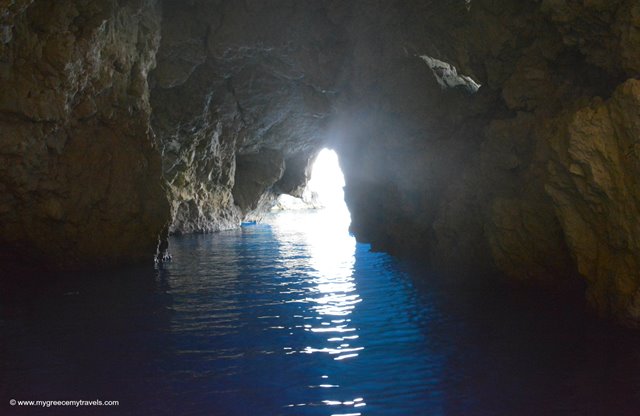 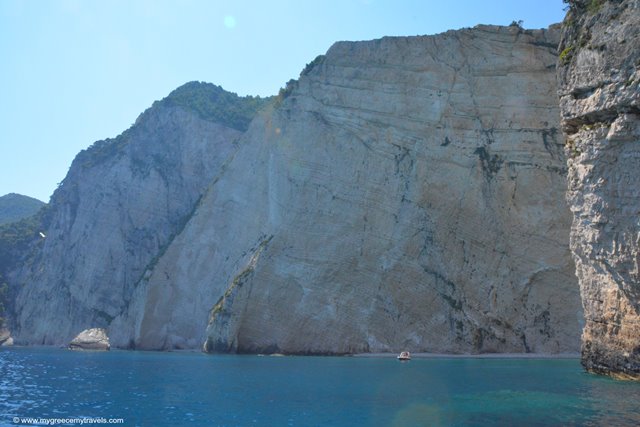 Air
There is an airport on Zakynthos. Flights are 45 minutes.

Between April and October there are direct charter connections with many European cities.

The Zakynthos airport is in the town of Ampelokipi, which is three kilometers from Zakynthos Town. Check out the best flight deals on Vayama.

To get around the island, you’ll save time if you rent a car. I can recommend booking through Avis Europe.

Where to Stay in Zakynthos

Zakynthos is filled with all types of hotel options. I enjoyed my stay at the three-star Plessa Palace hotel in the quiet resort town of Alykanas.  A very hospitable Greek family-run hotel with a good little Greek restaurant.

Check out my post: Where to Eat on Zakynthos.

Have you ever taken a boat tour to see the Zakynthos sea caves?