The last time I rode a horse I was around five years old. It was in Brooklyn at some makeshift city fair. From what I understood, that effort lasted a few minutes since my parents ended up taking me me off the poor animal after I started wailing. Now, in my thirties, I found myself with the opportunity to go horse riding in Greece. Here’s how it went…

“Opa!” That Greek expression/exclamation was all I had to remember to tell Bella to stop.

Thanassis, the horse’s handler, motioned how I should tug her reins to make that command actually work.  As I settled in Bella’s saddle, my heart beat a tad bit faster, in a few moments I’d be riding a horse for the first time. If I accidentally said stop instead of opa — in the heat of a panicked moment  — maybe I’d be in trouble. She was a Greek horse, after all. Do they even know what stop means?

No time to think about those details because next thing I knew — we were off!

Bella’s braids, laced along her mane, swung gently about as she stepped off. She followed my fellow tour members atop of their steeds and in minutes we moved along in a sure and steady pace. Eley rode a white male named Ari.  Elena led the group with Sandy, a brown female.  Stefanos, my other half and a lover of horse riding, followed Bella on a lovely dark brown mare named Naomi. 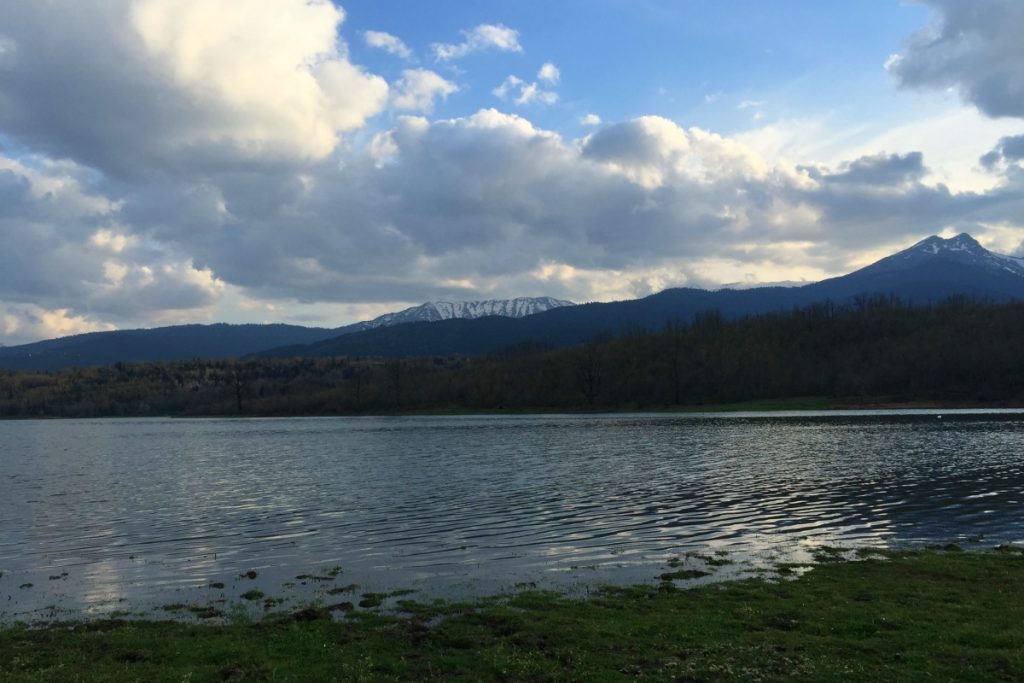 Our group rounded a corner and as we did, the views of a rich green pasture and the shiny dark blue sheen of Lake Plastiras spread out before us. 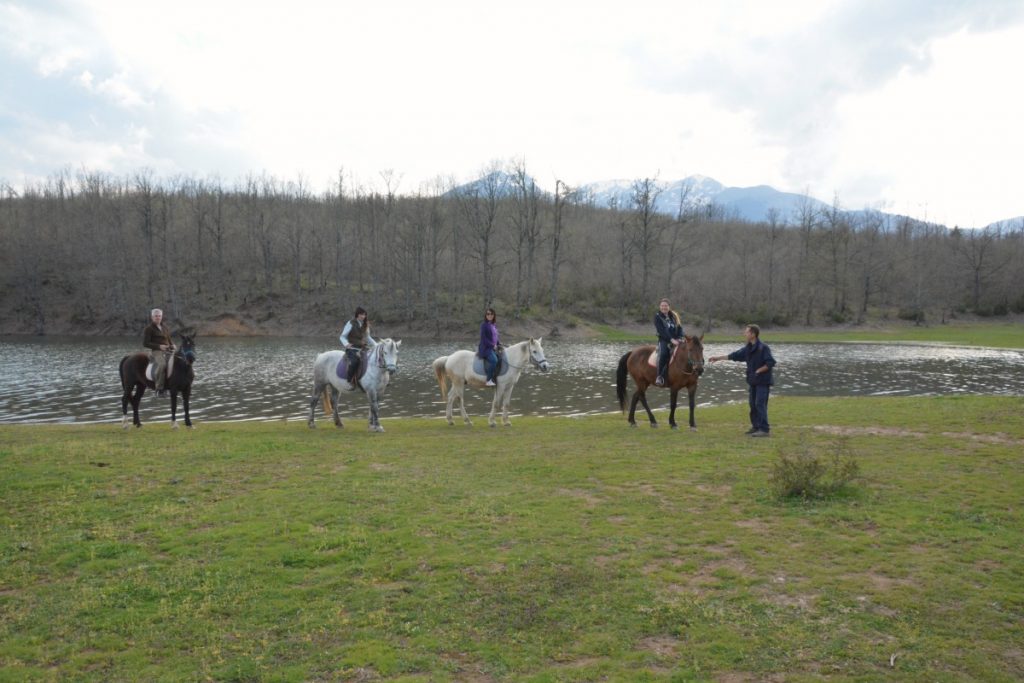 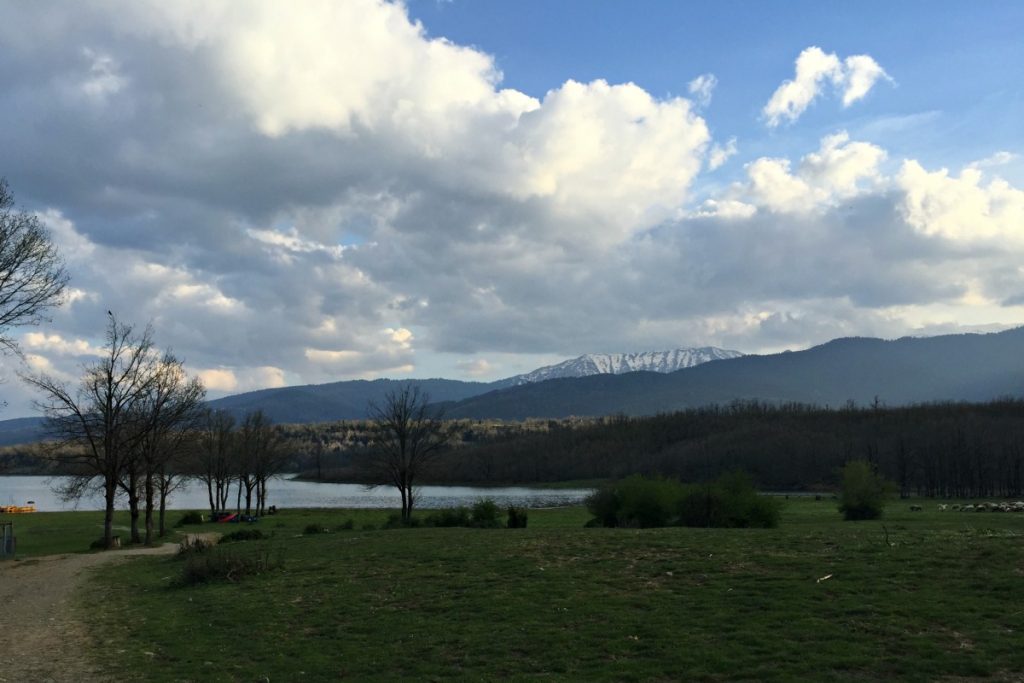 A refreshing mountain chill surrounded us as the sun started to set. Any tinge of doubt about falling off the calm and steady Bella escaped me.  We were in good hands. Two of the Saloon Stable’s amiable horse handlers, Yannis and Thanassis, accompanied us and chatted along the way. In doing so, they displayed their “horse whisperer powers” expressed in coaxing Greek and, as a result, revealed  a few characteristics about our new horse friends during the journey.

(Hondroula translates to little fatty. Trust me, it was a term of endearment.)

Apparently, Bella was the tubbiest of them all and wasn’t shy about showing me her love of food.  A few times she’d stop in place to munch on a patch of tasty grass.

We headed up and down the lake shore, stomped through a small wooded area and trotted back along the grassy knoll as the rural landscape continued to move in its slow, lazy way around us.  A herd of sheep rustled in one corner as a sheep dog circled around them to keep them in check. 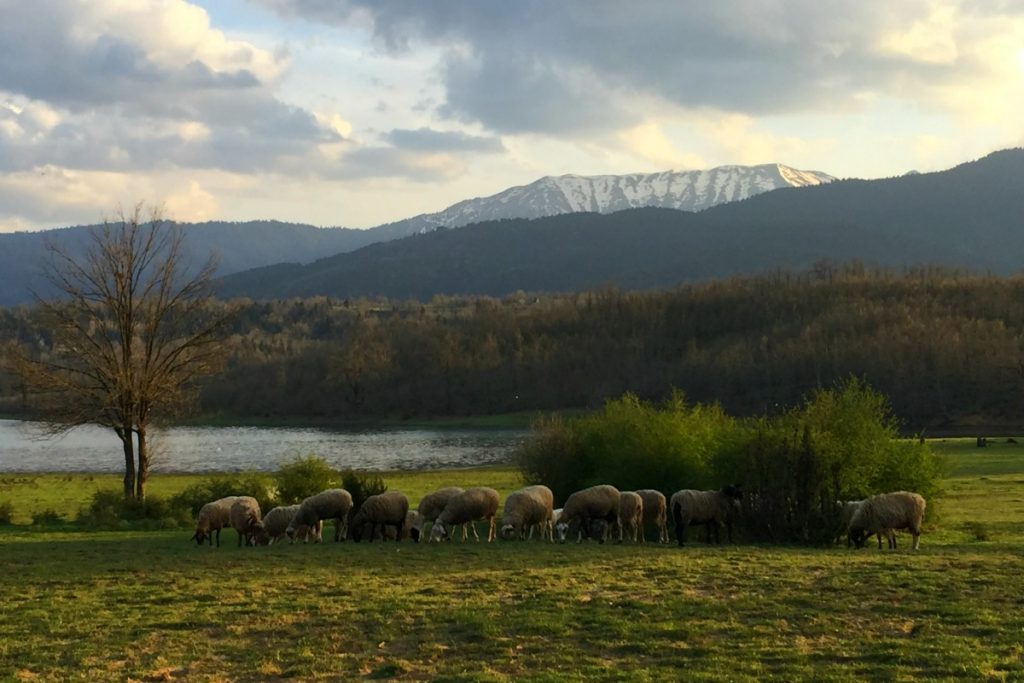 The moody clouds covered the sun at times creating a dramatic skyline over the Pindos Mountains that rose in the distance.  The  glistening lake made the scene all the more picturesque.

Lake Plastiras, also known as the Tavropos Reservoir, is an artificial lake fed by the Tavropos River.  A famous Greek general and politician, Nikolaos Plastiras, who hailed from the area was the first to visualize a dam and  the large lake was eventually named after him.  Construction on the dam had begun in 1955.

Since then Lake Plastiras has remained a highlight of the region that offers visitors what I like to call “a different face to Greece.”  We were exploring the center of Greece, a totally different scene from the country’s famed islands.

Although I was aware of Greece’s diversity, having lived here for six years, it was hard to believe the picturesque mountain destination was Greece. 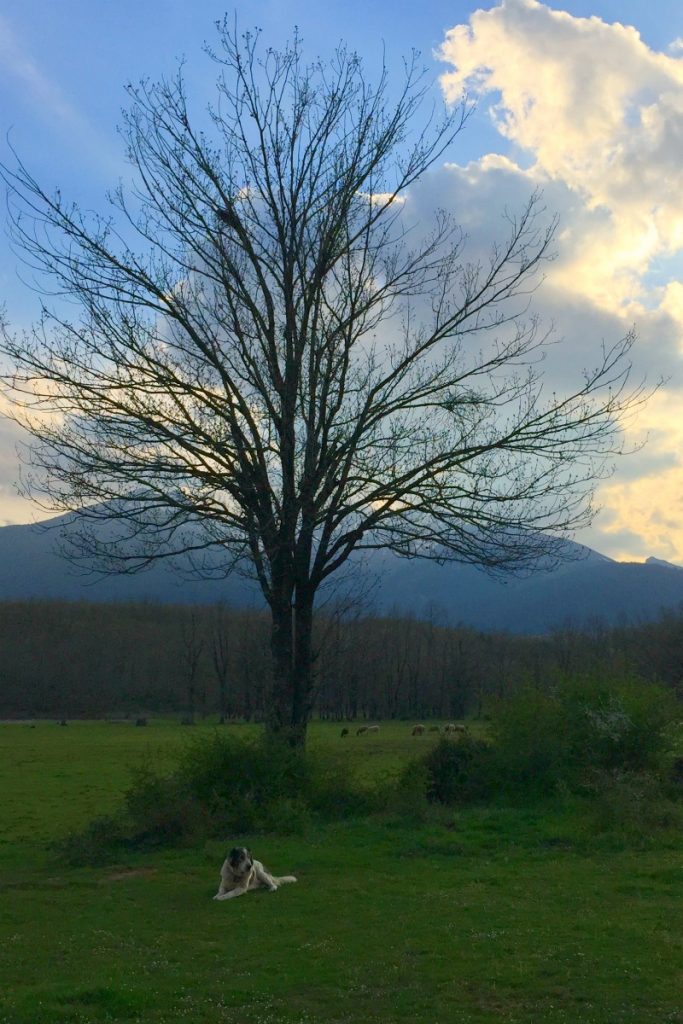 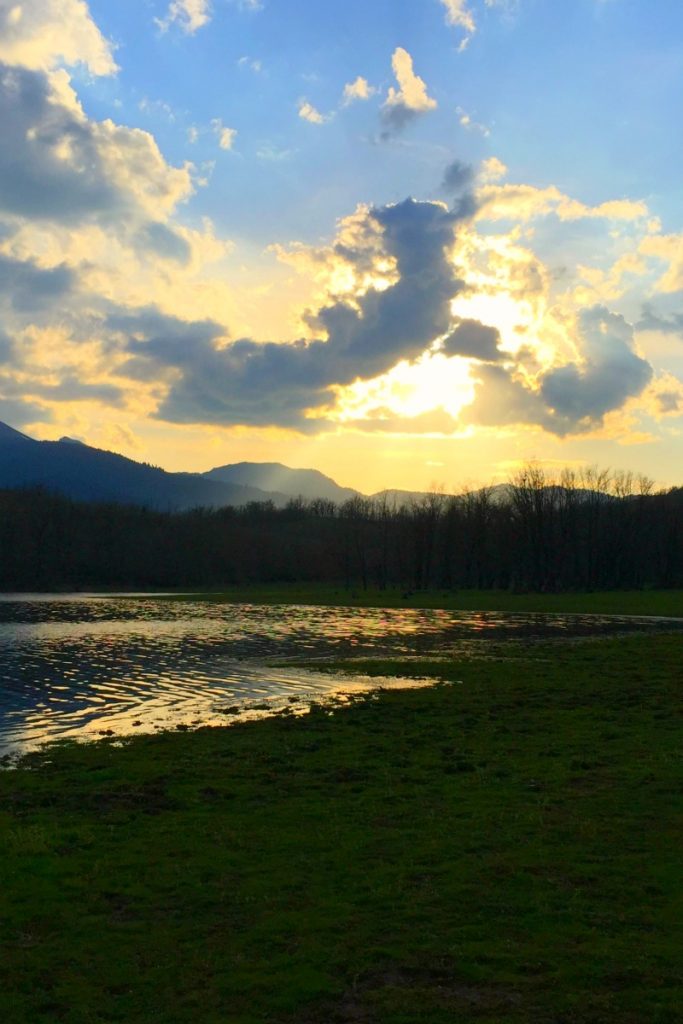 The scenic drive takes one up into the Pindos Mountain’s steep peaks. The Pindos range’s highest point, Mt. Smolikas, reaches 2,637 meters. Before coming, I had understood that Lake Plastiras  would be a region that would deliver on the unique inland excursions that Greece still isn’t known for — experiences where fresh mountain air is a highlight.

That was how we ended up spending the afternoon with Sandy, Aris, Bella and Naomi and how I ended up on my very first horse ride.

My overall experience horse riding in Greece for the first time — as an adult? I’d do it again in a heartbeat. Bella and I got along just fine. She managed to sneak in a few extra bites of grass before we headed back up to the Saloon stables — before Thanassis could scold her.

Afterwards, Antonis, the manager of the stables gave us a tour. We met a few other horses they were in charge of including the beautiful male horse named Hermes and then his son, Duke.

Finally, we headed into the Saloon Stables on premises bar-café area designed like an American saloon.   We all admired pictures of our new horse friends that were framed along the wall.  There was my Bella running in the snow-clad landscapes of central Greece’s cold winter.

“Do you want to know a bit of history?” Antonis asked us.

I nodded as he tapped a photo of the horses we had just ridden.

“These are the same race of horse that Alexander the Great rode,” he said with a smile.  With emphasis he added, “Thessaly horses.”

I knew they had to be extra special.

Other details: Kids can ride.  Accompanied by handlers who also take great pictures!
Saloon also rents out peddle boats and has an arrow shooting range.

Where to Stay in Lake Plastiras

What to Do in Lake Plastiras

Love local gastronomy?  Head on a farm-to-table tour. Check out my post: Farm-to-Table Tour in the Greek Mountains.

This mountainous area of Greece shows of a side that isn’t about palm trees and beaches.  Check out my post: Agrafa Mountains: Hiking Among Waterfalls 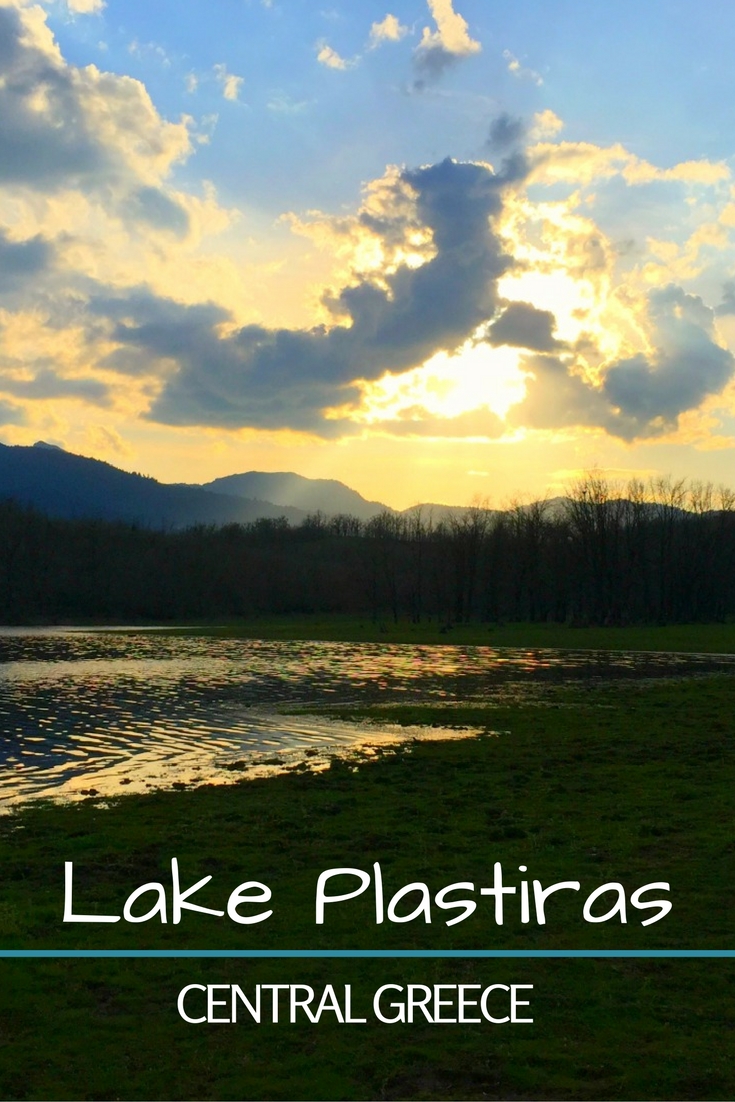