The best beaches in Agistri are beautiful island beaches that are easily reachable – just an hour away via ferry – from Athens.

Agistri Island: So Close to Athens

Agistri is one of the closest islands to Athens.  Several fast ferries speed off to to the Saronic island by the hour at the cost of €9 – 15  one way. The journey is about 50 minutes long. Then, voila! You’ve reached a pretty, green island.

Where else to head to next but the beach! 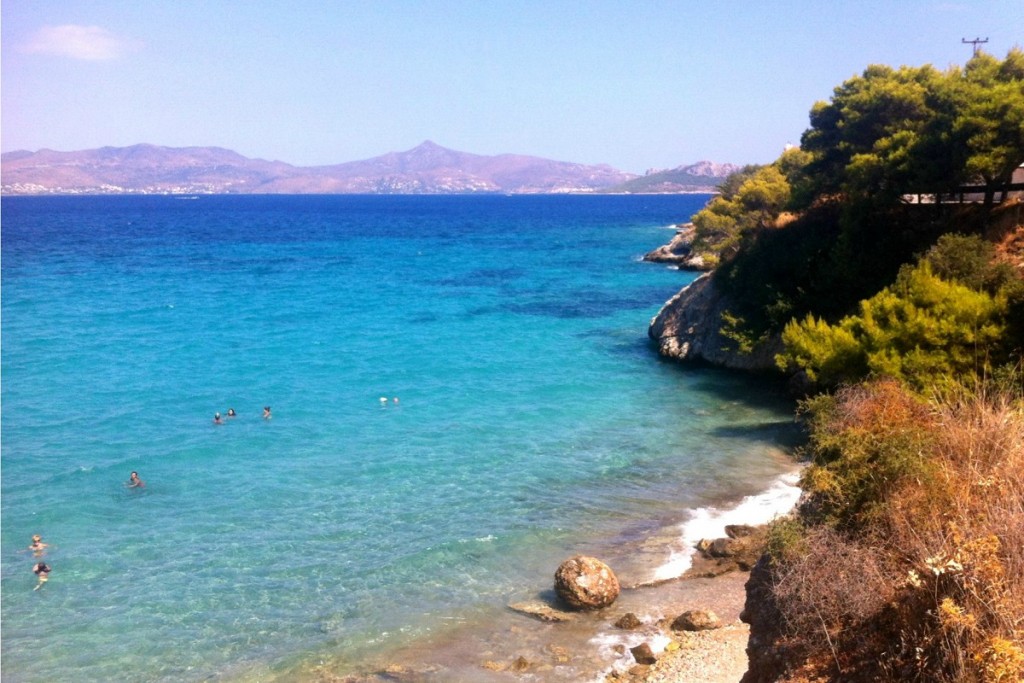 Agistri has a beautiful coastline. 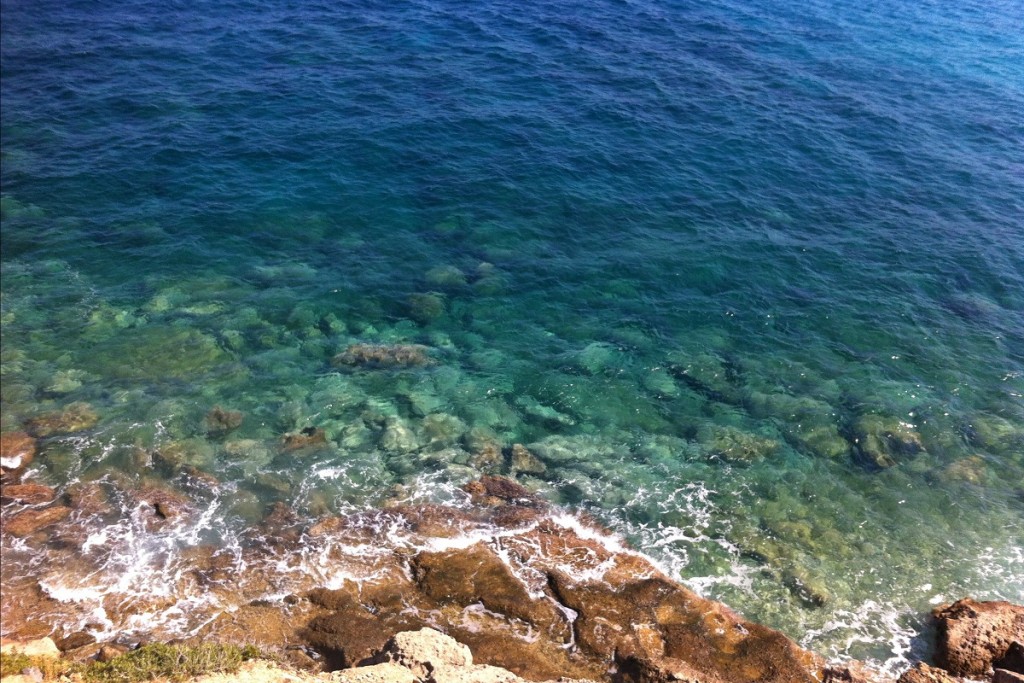 Here’s my rundown of the best beaches in Agistri.

These two beaches can be reached by foot.  I didn’t spend any time on  Skliri but saw it on my hike as I passed it to reach the neighboring beach called Halikiada. 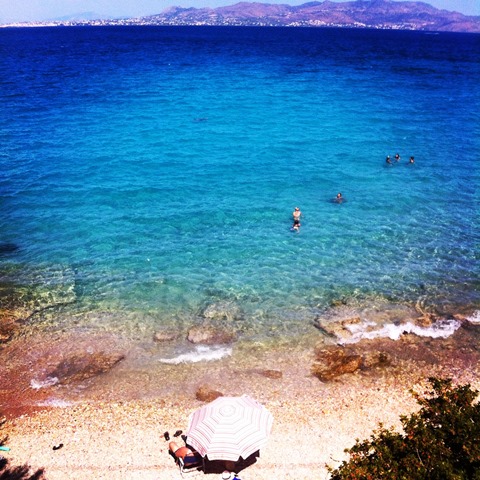 Aurore and I walked about 15-20 minutes in flip flops.  I’d highly recommend stronger shoes or sandals. You basically follow the road from Skala which turns into a narrow path that leads into a dirt road right into green, fragrant pine woods.  You’ll be distracted by some amazing sea views to your left. 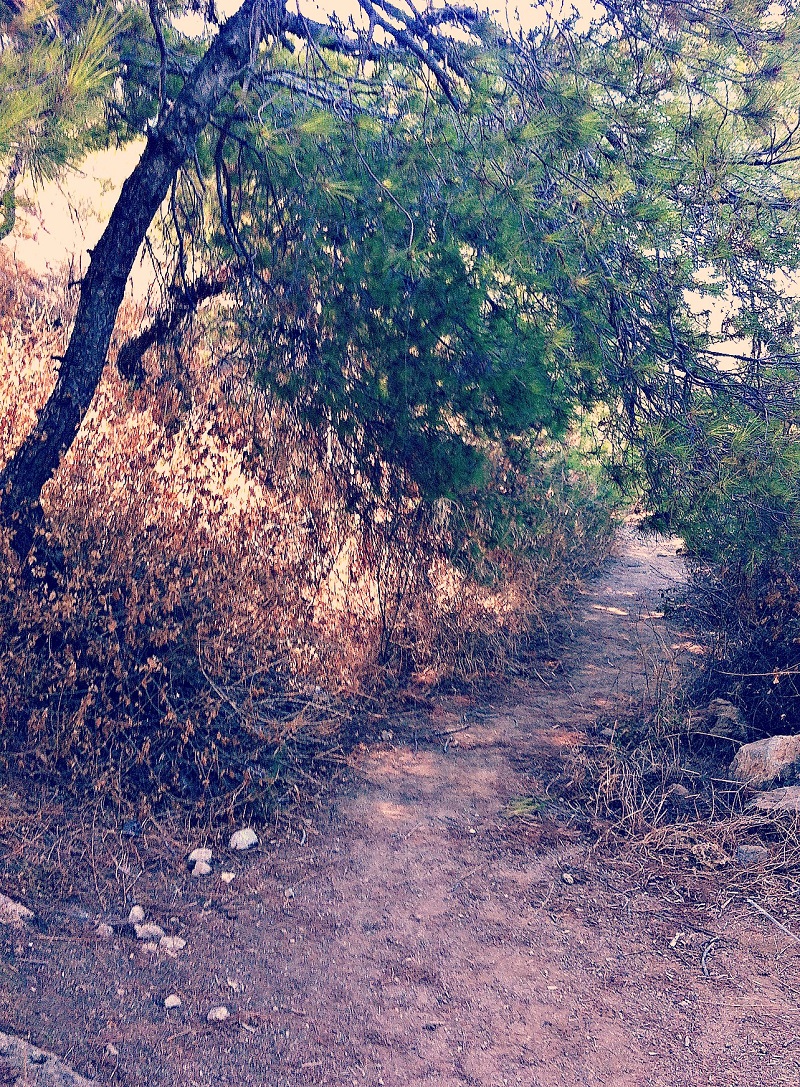 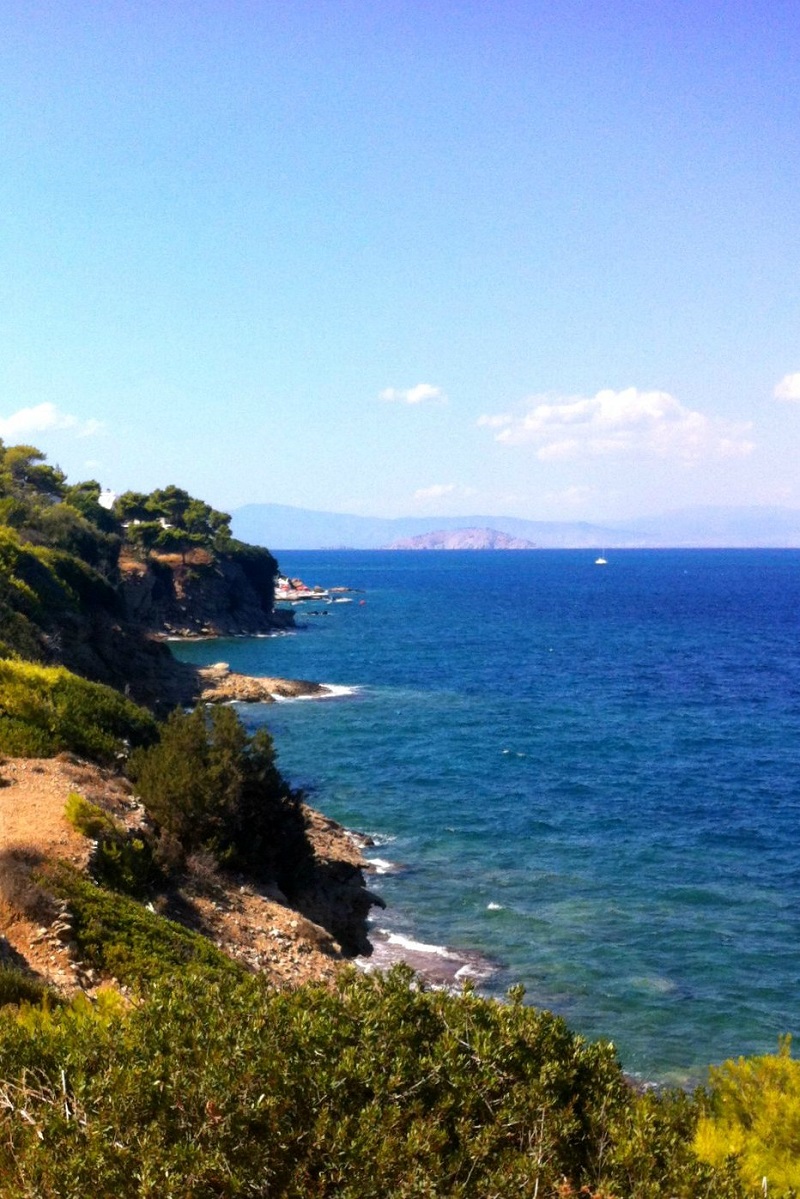 Walk the coastline to Halkiada beach. 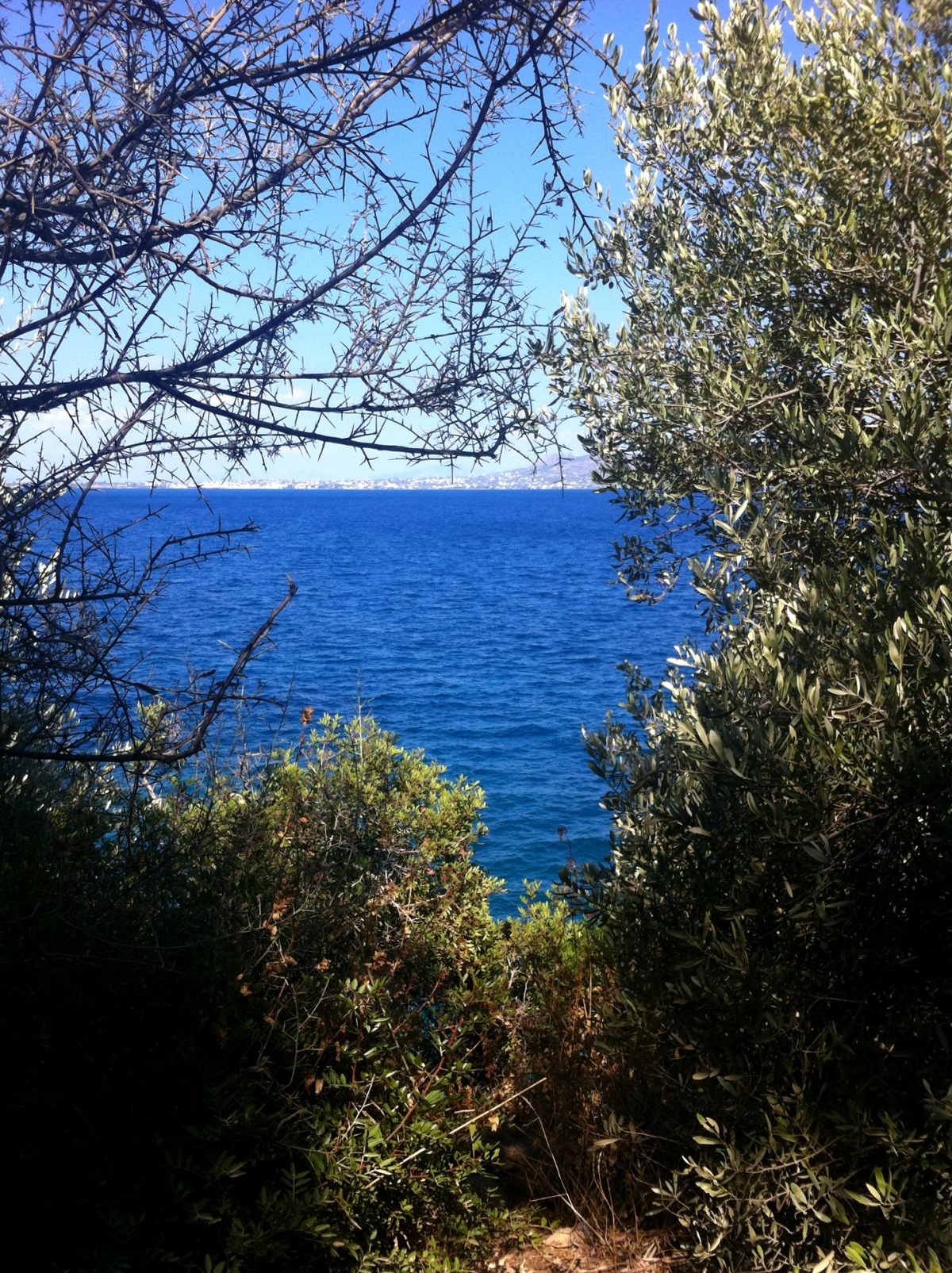 Sea views between the trees. 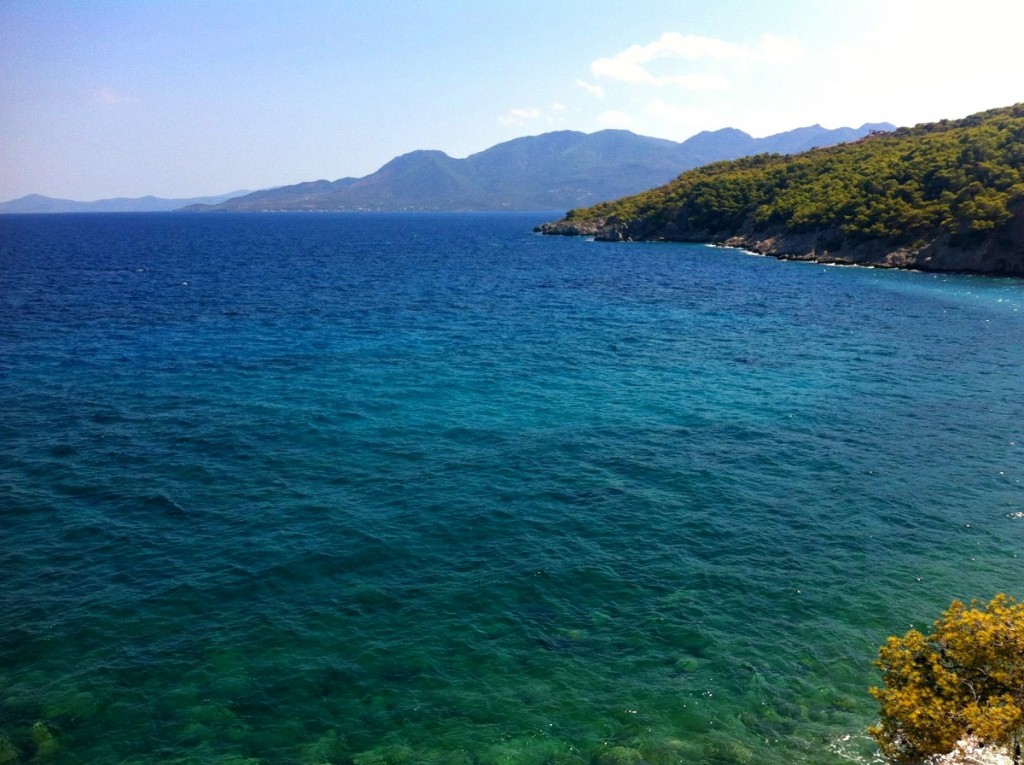 View of the sea as you walk to Halkiada beach.

After you reach a clearing you need to semi-hop your way down to get to another rocky path.  That’s when you reach a small rocky beach. By then, you may want to jump into the water.  Just continue on a bit more, be careful not to slip and you’ll follow the rock’s curve to make it to Halkiada. 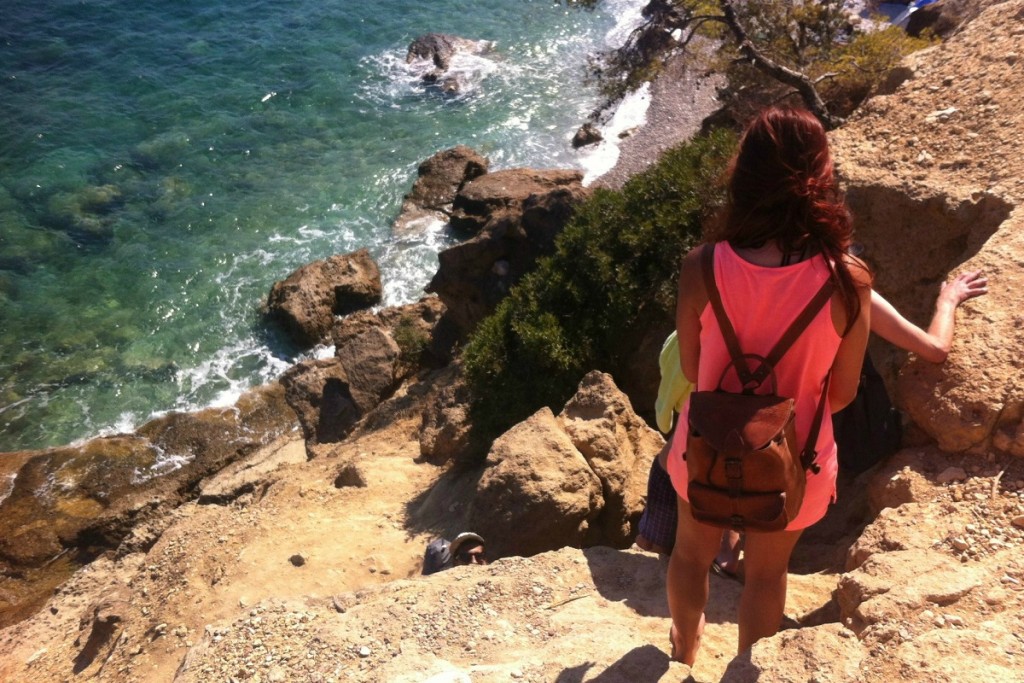 Hanging Out on Halkiada Beach

The waves were quite rough and the water got deep quickly. As for the beach itself, campers and nudists filled the small space. It was a rocky beach, no trees. The only shade would be from the cliff depending on the angle of the sun. 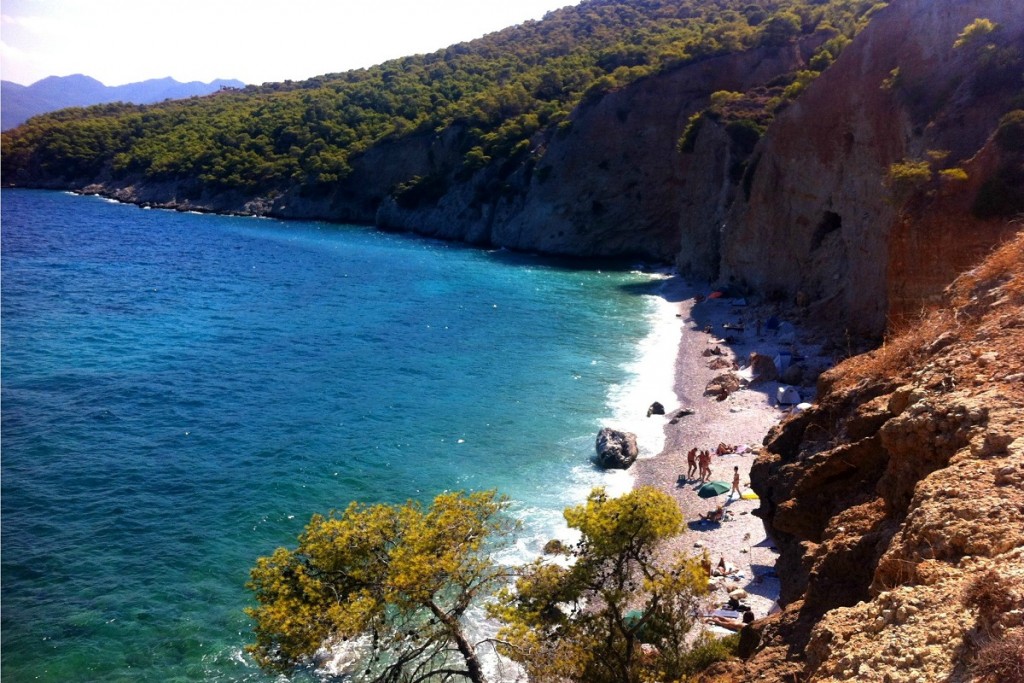 Here’s some video from my YouTube channel of the scene on the beach that day.

Another one of the best beaches in Agistri was a the pebbled beach known as Dragonera.   The saw was a spectacular blue.   A summer season beach bar rented out about two dozen deck chairs and umbrellas. They didn’t have any more available, so we sat under some natural shade provided by a group of trees nearby. 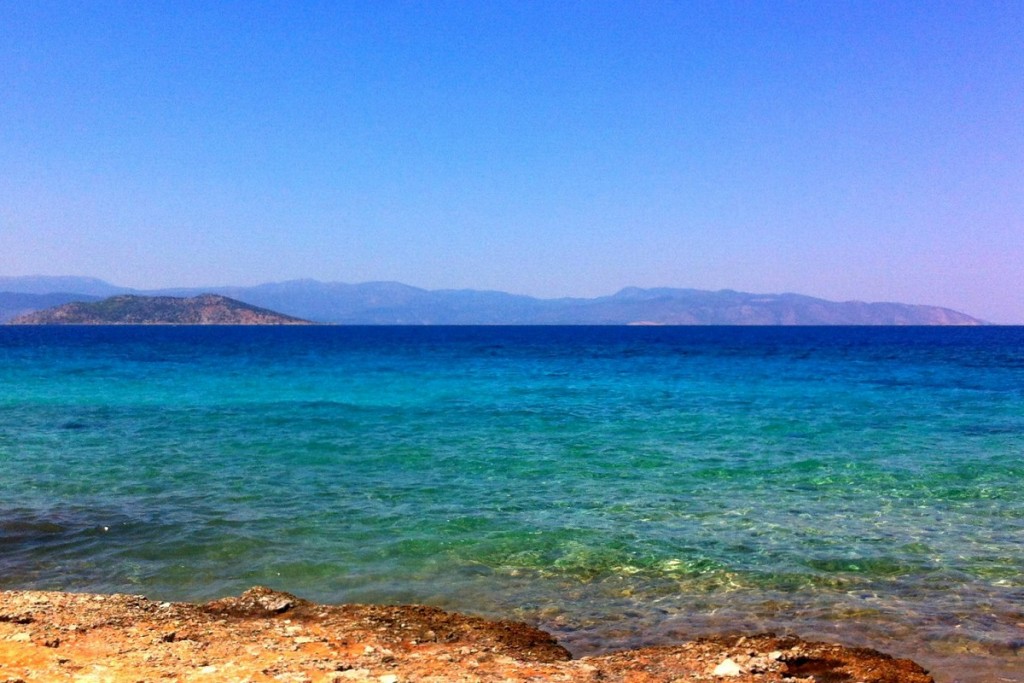 This was one of the best beaches in Agistri and ranked as my favorite destination on the island. Aponisos was a private island located west of the village called Limenaria.  Shallow clear baby blue water filled the small bay in-between Aponisos island and Agistri. 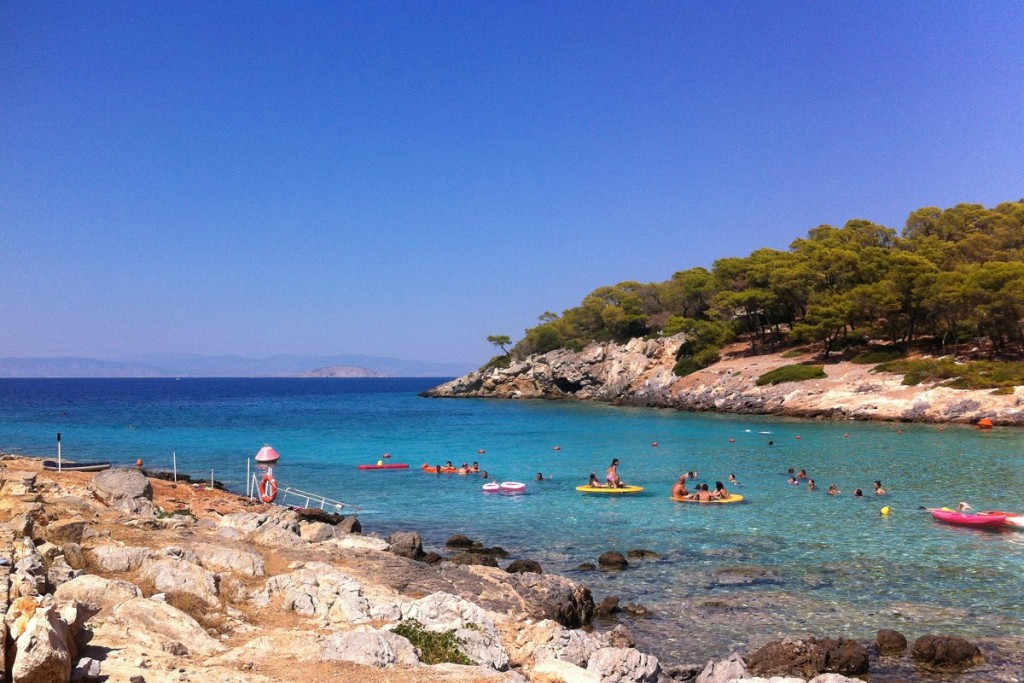 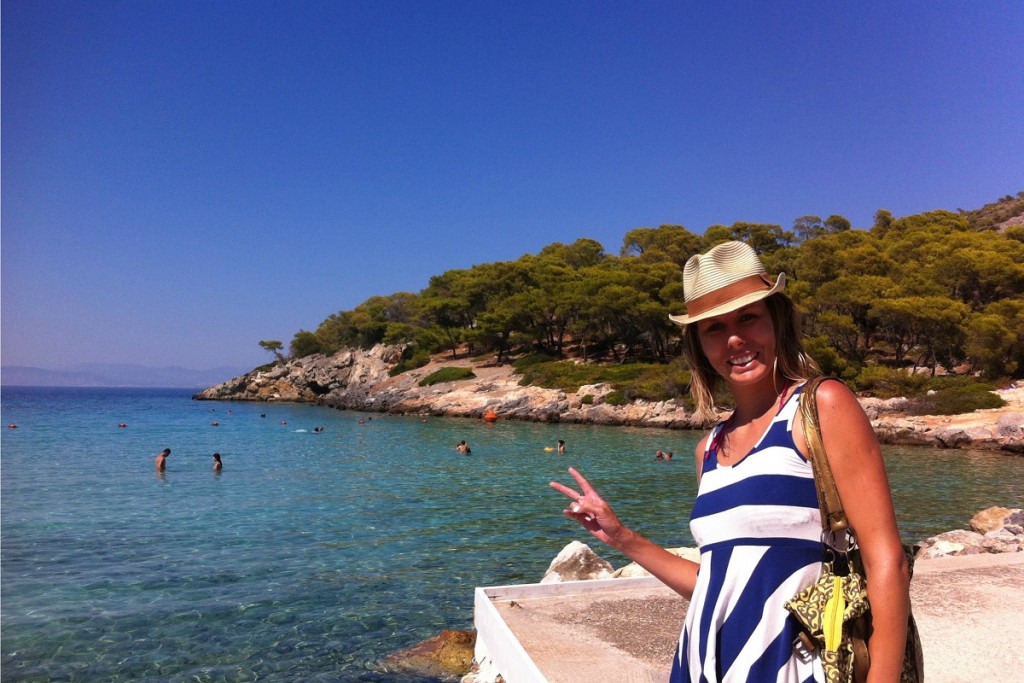 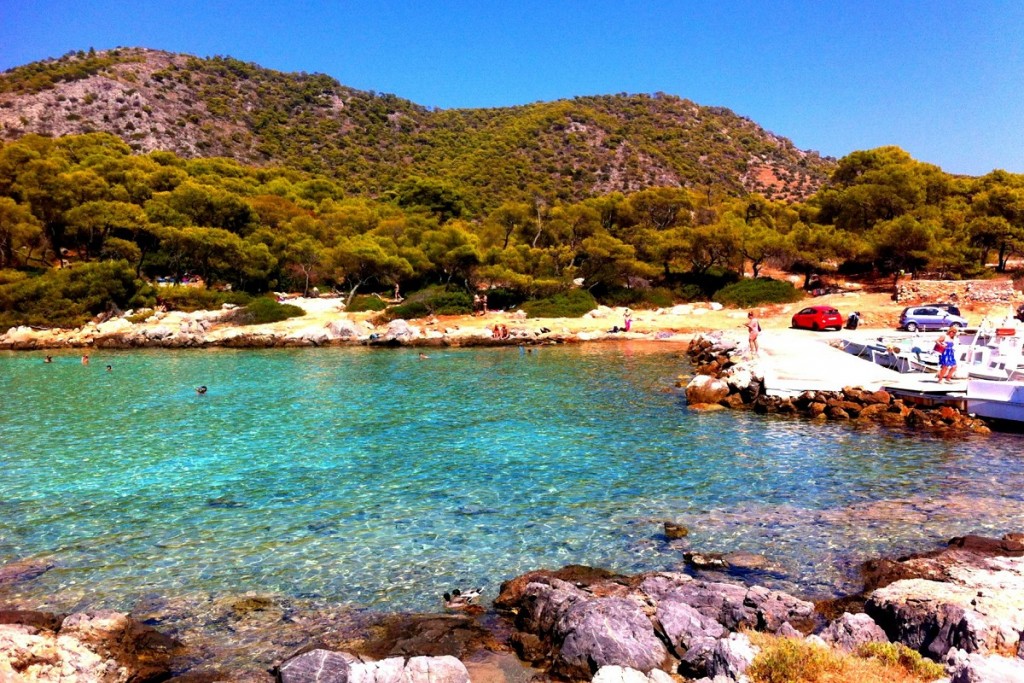 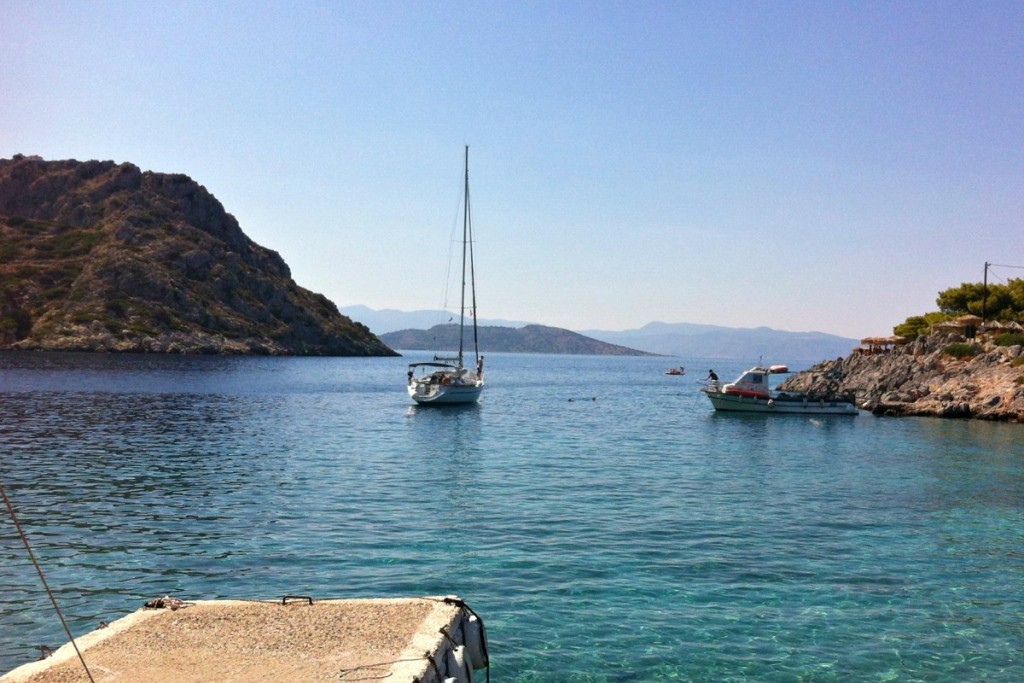 The lounging area on the opposite side of the island takes your into much deeper seas.   There was a good seafood taverna within five minutes walking distance off the main road. You can also order iced coffee, snacks and club sandwiches from the beach cantina from your lounge chair (€5 for two chairs). The great part was that we managed to grab two chairs during the days we arrived to spend the day. We found this pretty great being that it was the middle of August and many times beaches in high demand run out of lounge chairs pretty quickly. 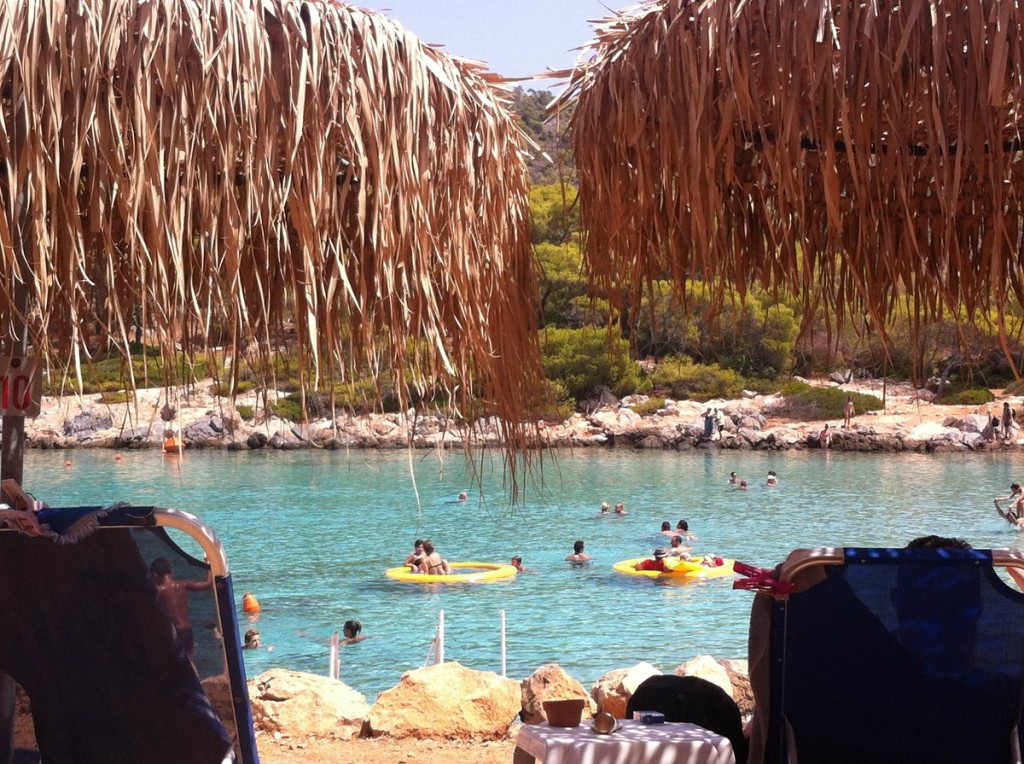 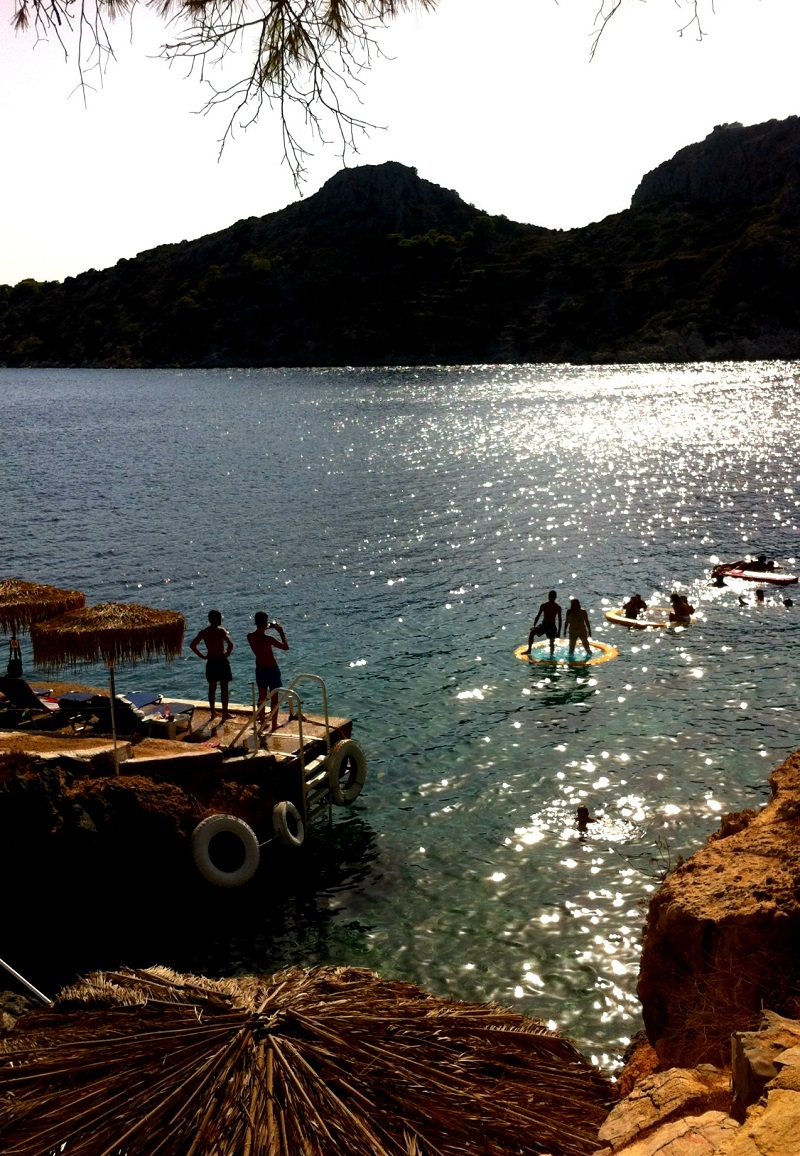 The deeper waters of Aponisos. 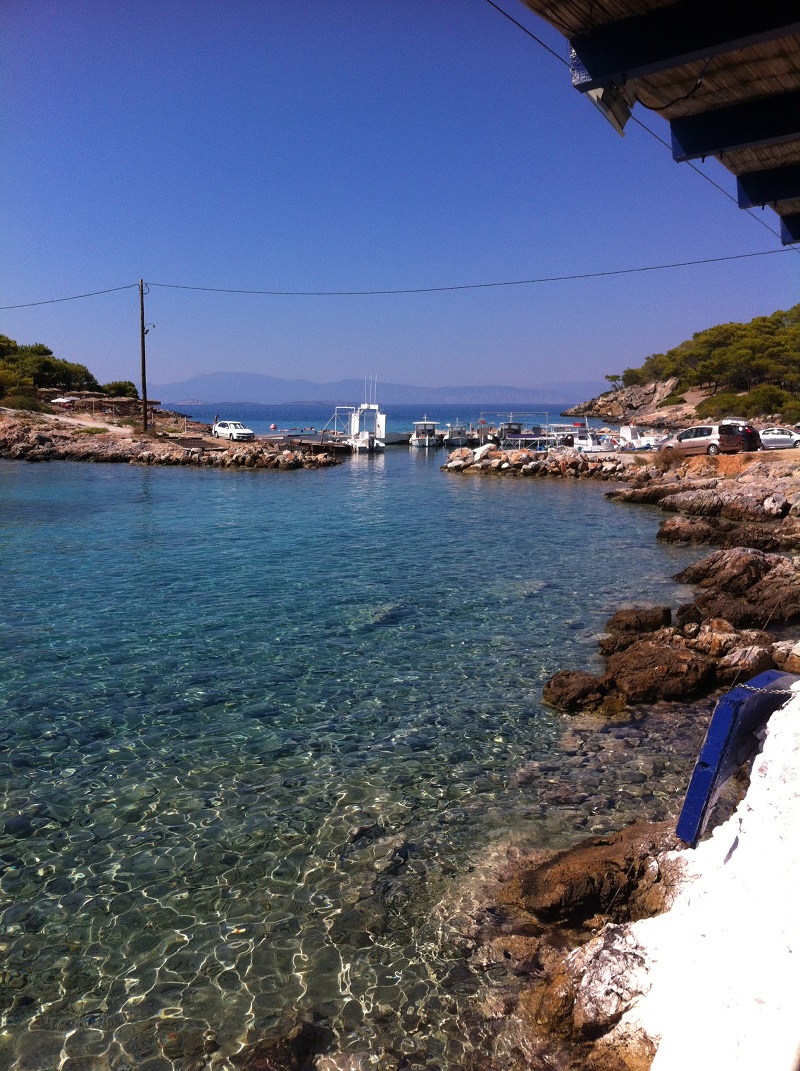 View from seafood taverna in Aponisos. 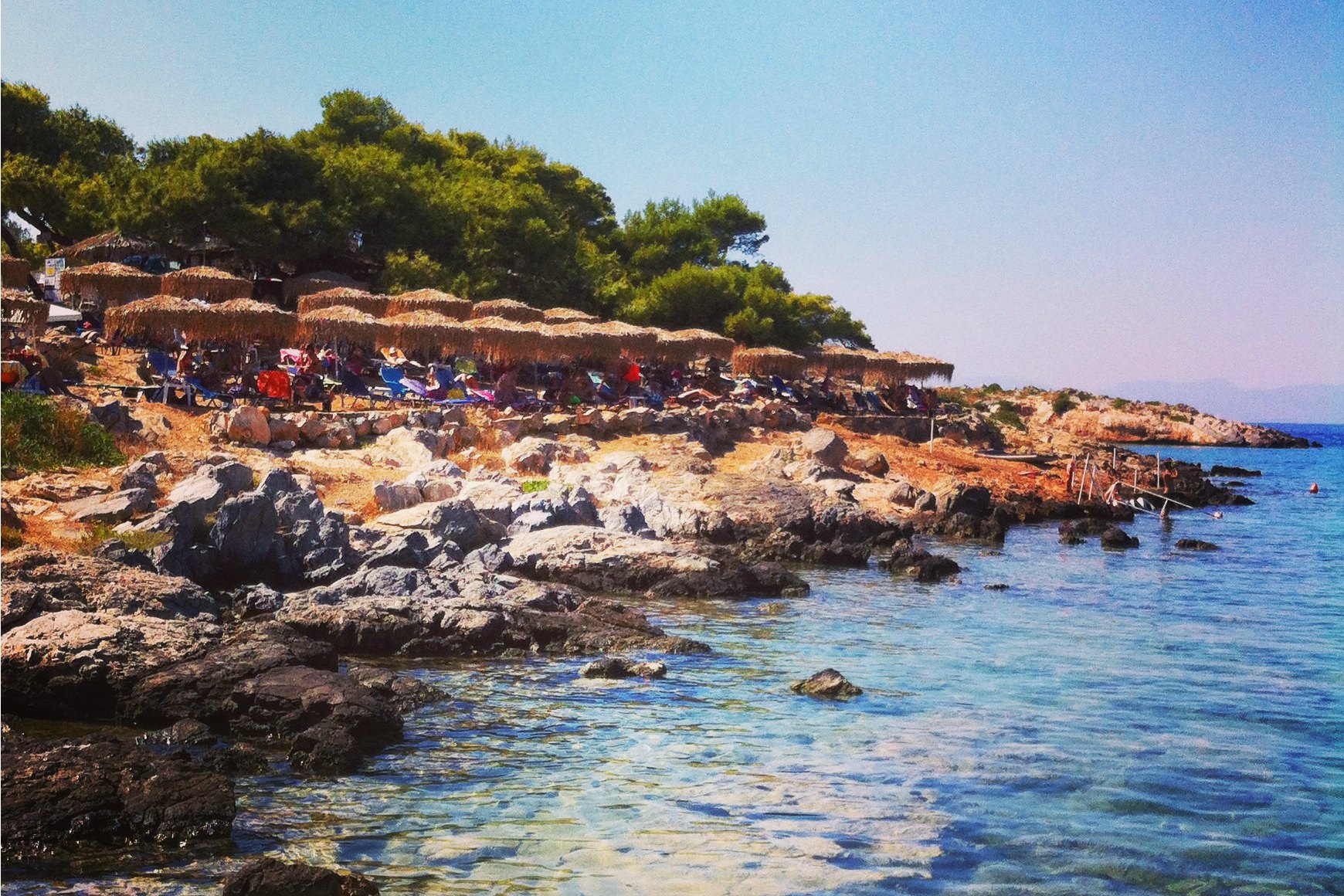 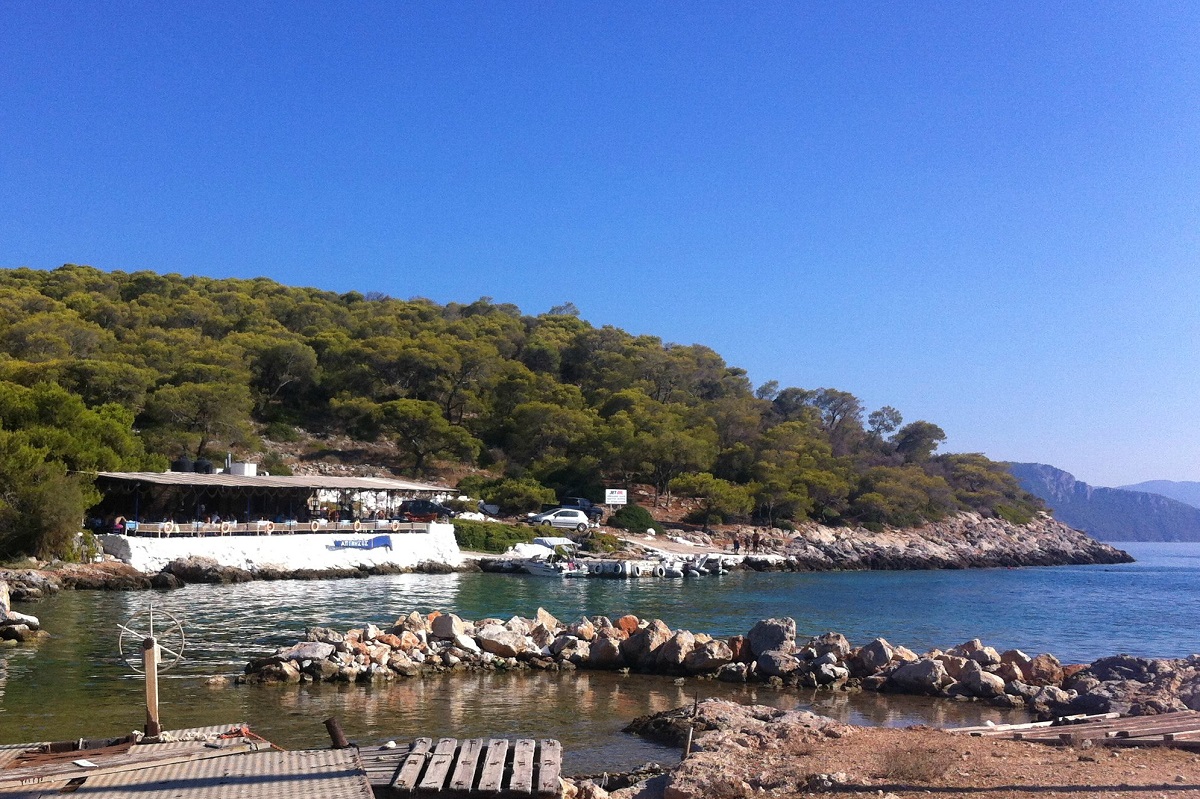 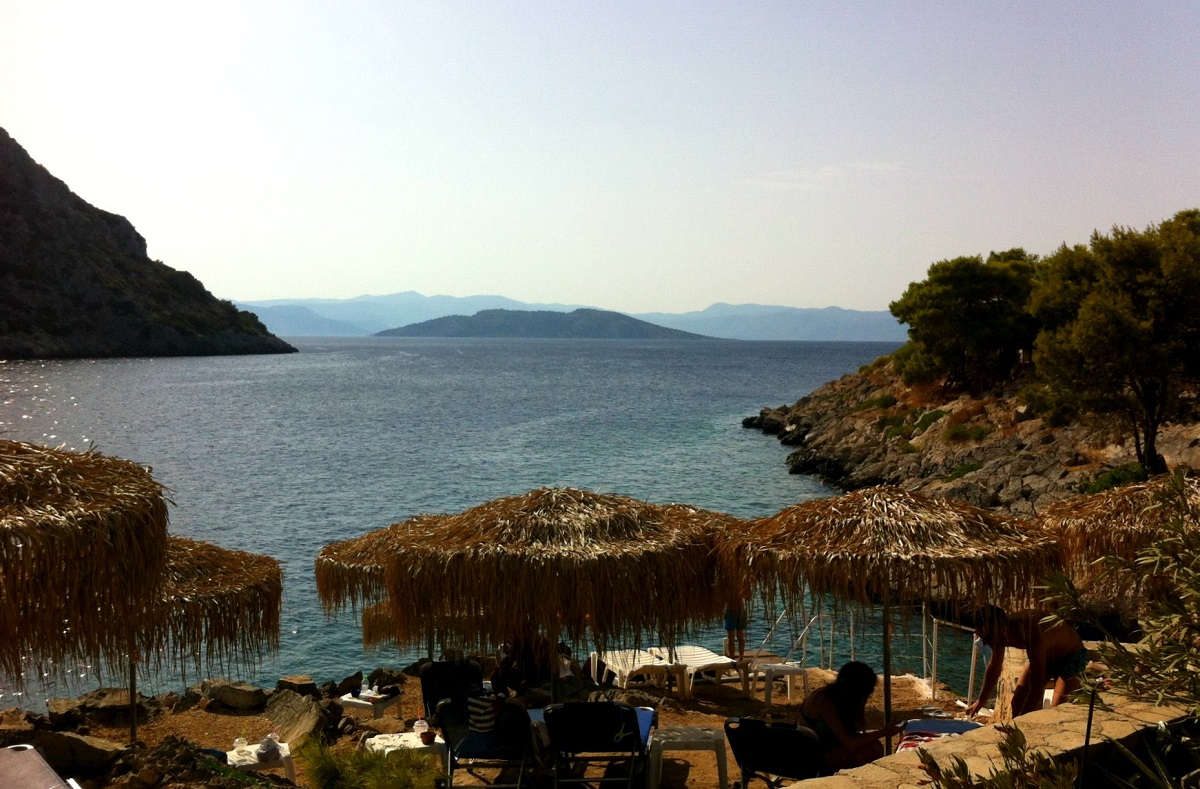 There were no big hotels or development around this area. We were just surrounded by Agistri’s green, lush landscape and sea’s calm blue. I really enjoyed Aponisos. I absolutely loved the calm of the environment.

Getting to the Best Beaches of Agistri

An island bus stops at these beach locations from the main lodging towns of Skala and Megalochori. Keep in mind there are also beaches that line these main villages, if you don’t want to venture far from your room.

Taxis are also available to get you around as well if you don’t want to wait for the bus.  The island is very small so the distances are just 10 to 15 minutes away from each other.

If you’re visiting Athens and just want to get away for a day or two heading to the best beaches in Agistri would be worth the experience.

Have you ever been to the best beaches of Agistri?