Athens has some magnificent blockbuster museums – the National Archaeological Museum is an absolute must –  but the experience, though gratifying, can be overwhelming in the wealth and the breadth of exhibitions. To get closer to history, a smaller museum can be just the thing. Our best pick for an intimate and rewarding museum experience is the Numismatic Museum of Athens. A vast and comprehensive collection of exhibits narrates the story of Greece in a tangible way. But for many, the main attraction is the setting. For whatever reason you visit- the collections, the historic mansion, or indeed even the charming and shady garden cafe – you’ll find the Numismatic Museum an oasis of culture and enjoyment in the sunny heart of downtown Athens.

Even the visitor who has no strong interest in coinage will find a visit here deeply rewarding, for the Numismatic Museum is housed in one the most spectacular neoclassical buildings of 19th century Athens, and has a fascinating story deeply linked to the ancient Greece of history and myth. 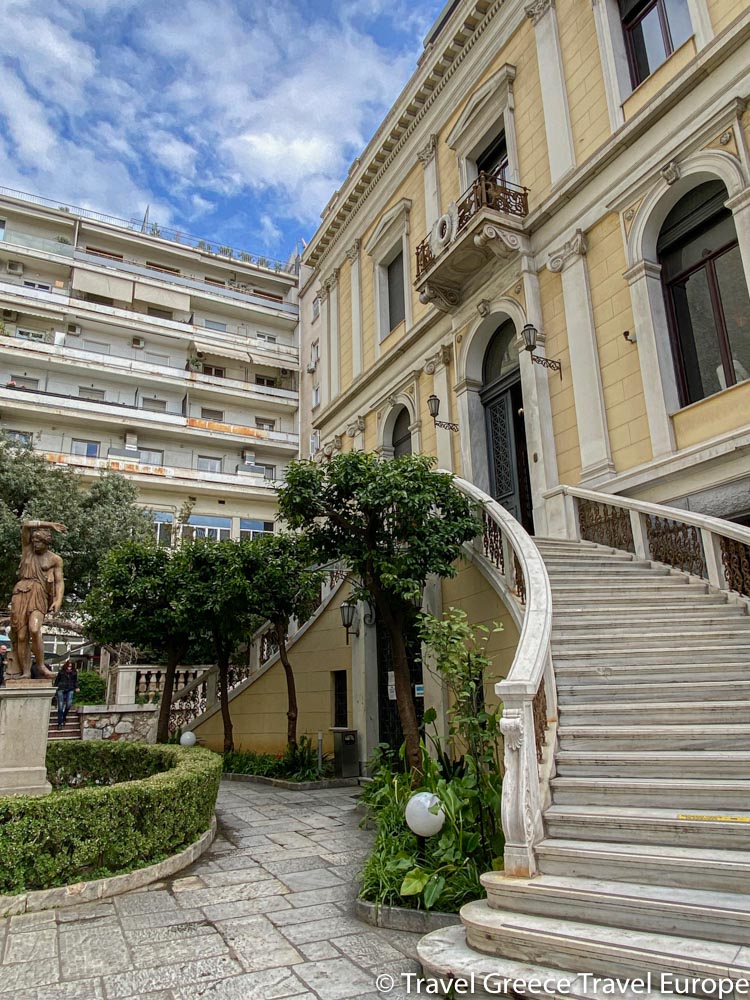 When Modern Greece was established after the War of Independence, Athens was but a small village with a spectacular history. Imagine the Acropolis and its parthenon surrounded by a tangle of humble dwellings, and relatively few of those. With the establishment of the Kingdom of Greece and the move of the nation’s capital from Nafplio, the first capital, to Athens, a campaign of building commenced. The Illiou Melathron was among them.

The Illiou Melathron means “The palace of Iliou” or rather “The Palace of Troy.” The Illiou Melathron, although far from the Troy of Homer, is intimately tied to its story, as that story is now tied to one of the most dynamic personalities in the world of Archaeology of the 19th century, the fascinating Heinrich Schliemann. 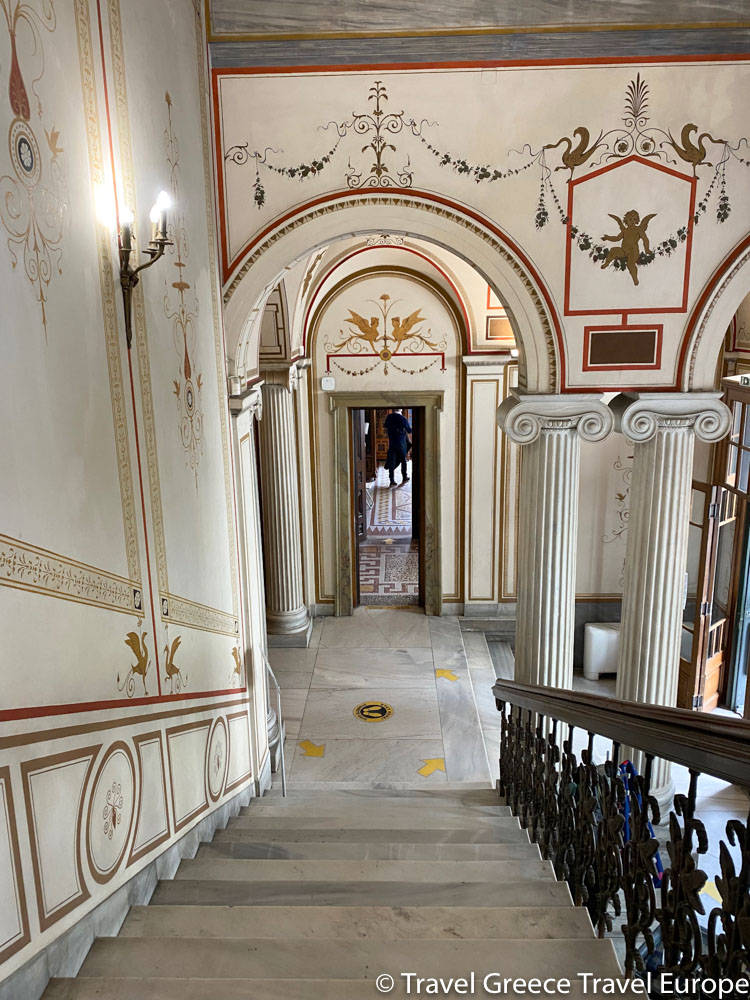 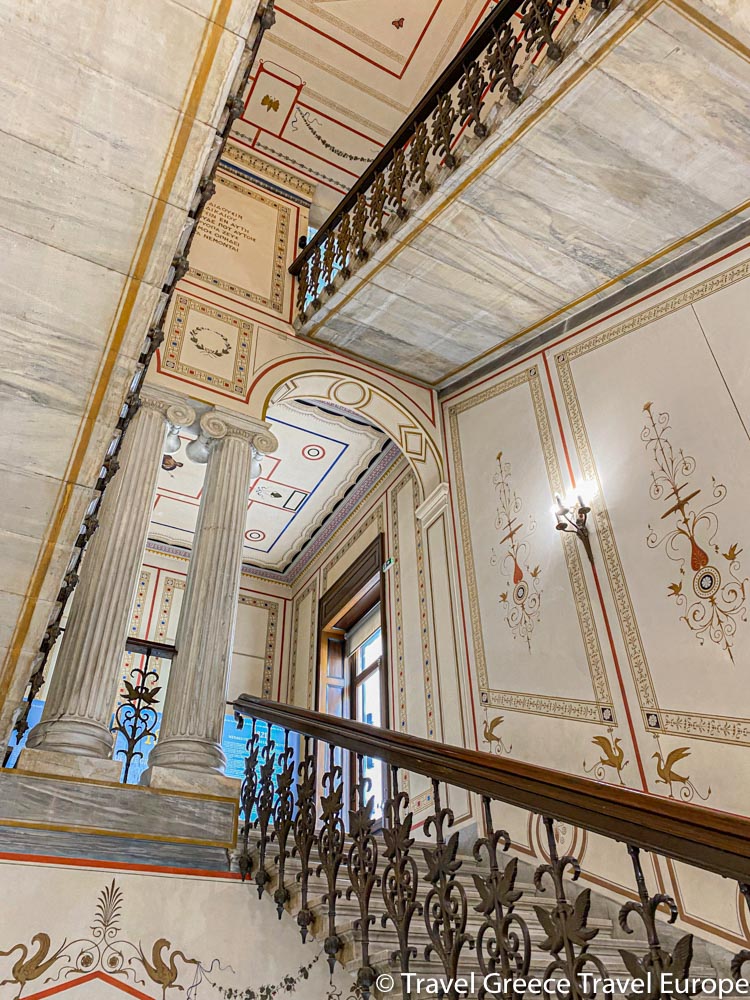 Schliemman, having amassed a great fortune in international trade, used his wealth to follow his passion: archaeology, and, specifically, his quest for archaeological evidence that the Troy of Homer that has so captured his imagination has really existed. He found what he was looking for in present-day Turkey, unearthing great treasures he presented as the Jewels of Helen of Troy, the Gold of Priam. 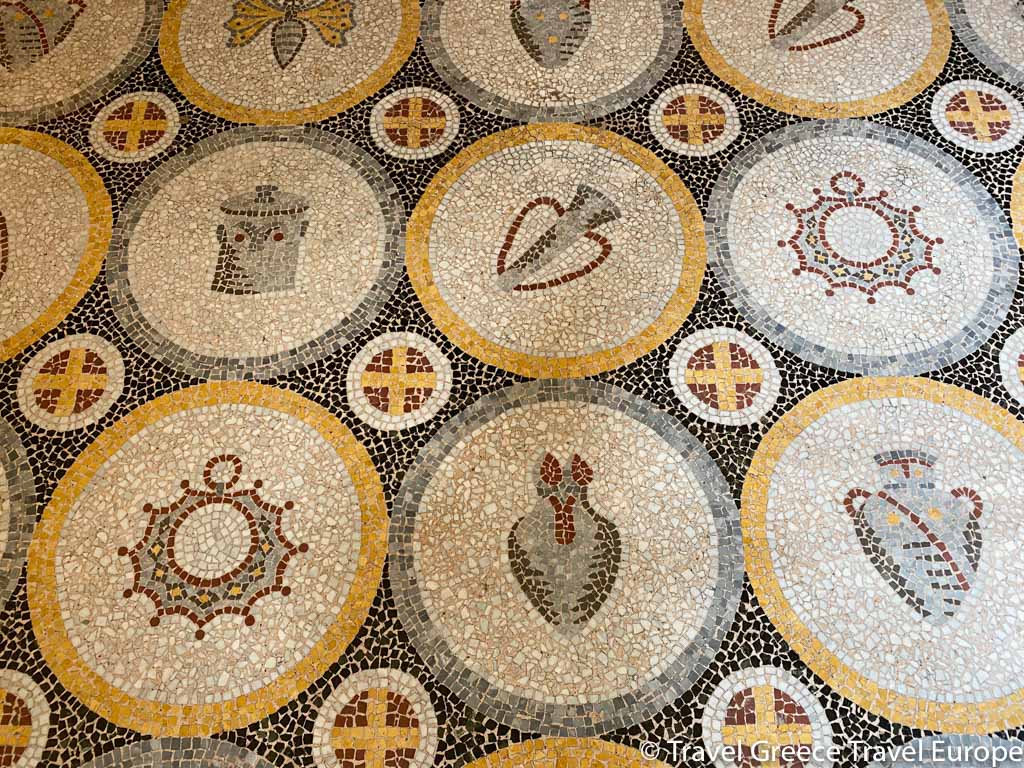 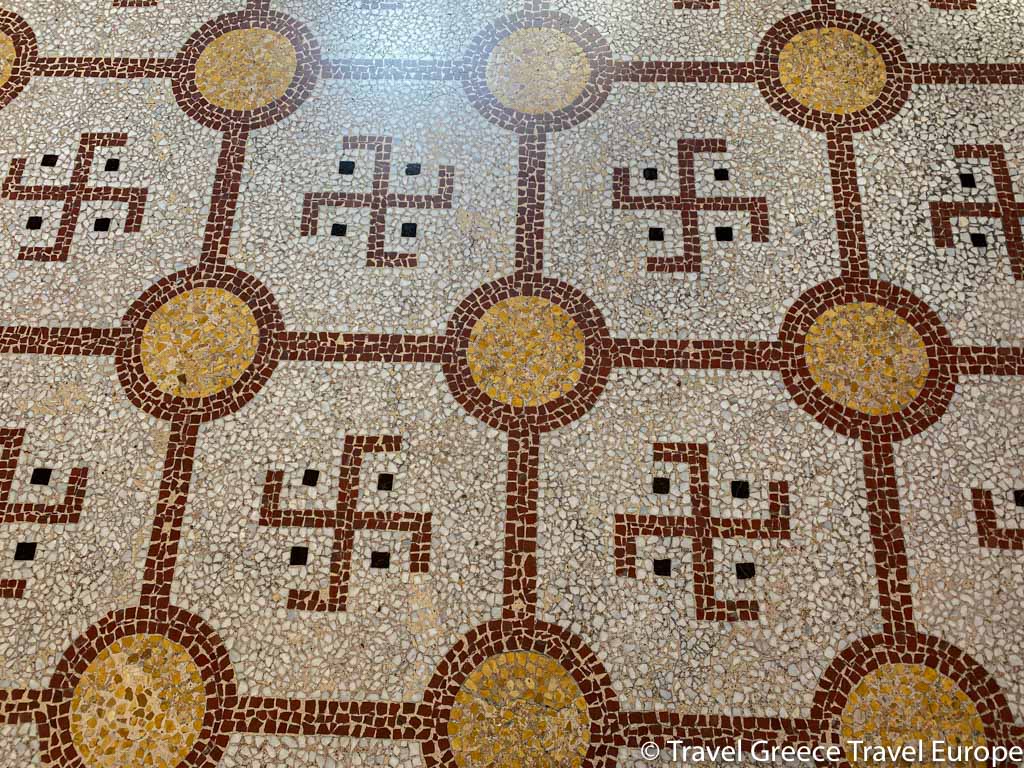 The Iliou Melathron was Athen’s most spectacular private residence when it was built. The sumptuous interior, boldly awash in color, has walls inscribed with quotations in Ancient Greek. Schiller lived here with his Greek wife Sophia and their children Andromache and Agamaemnon: we also have Schliemann to thank for the excavation of Mycenae.

The Vast Collections of the Numismatic Museum of Athens

But of course, many also come for the world-class collections on display in this fabulous setting. Millenia of Greek history is on display. Numbering well over half a million individual items, the collections of the Numismatic Museum rival those of the Biliotheque Nationale, the Hermitage, and the British Museum, among others. 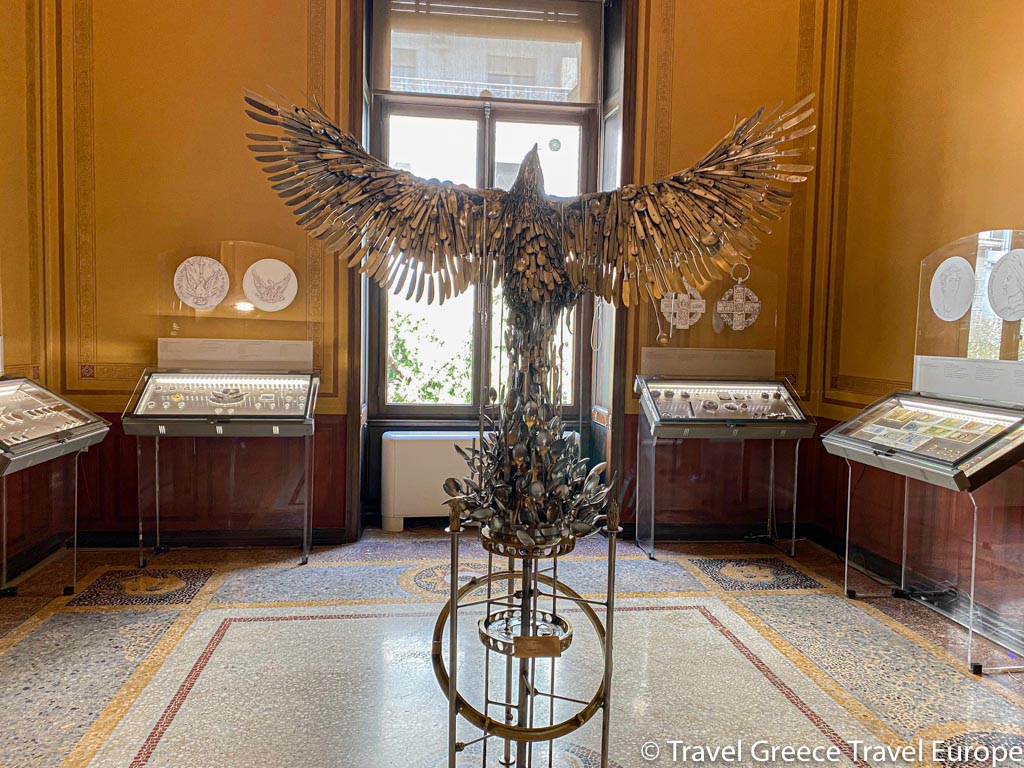 But besides being impressive, the collection also really brings centuries of everyday Greek society to life: while coins are the most prevalent, everything related to commerce is also on display, offering an excellent overview of trade in the ancient world. We see dies and stamps, standard measures, and other objects related to commerce. 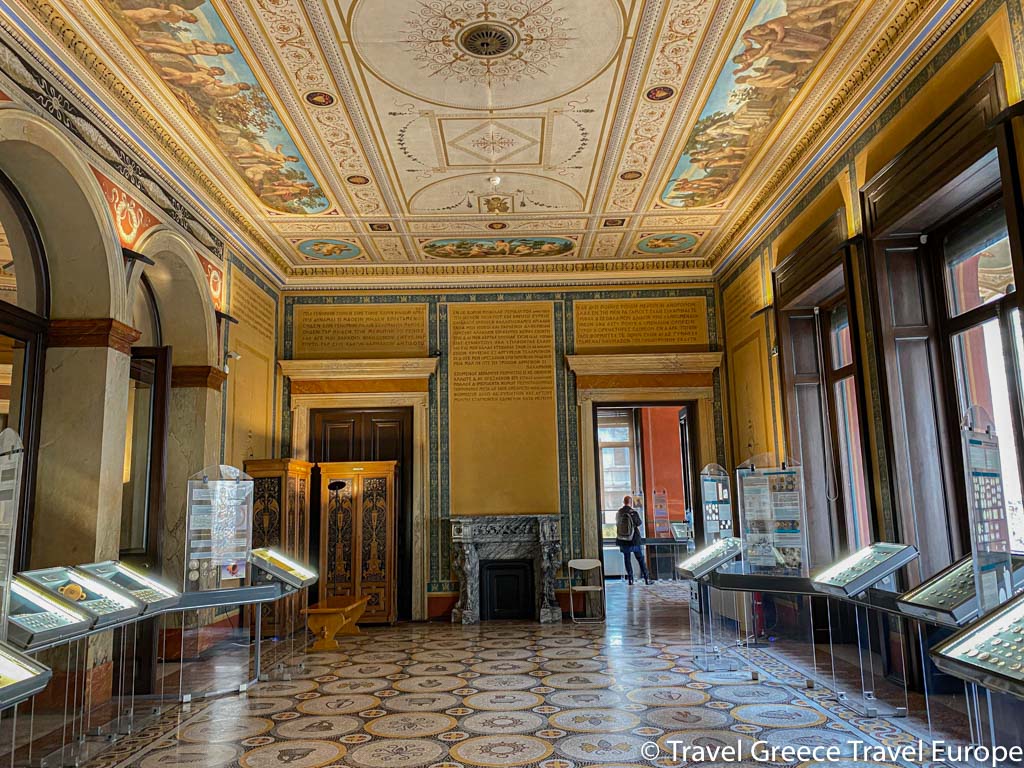 The collection spans Bronze Age Greece of the 14th century BC to our present era for a dazzling overview. Highlights focus on the coinage of Greece’s best-known eras – from the Golden Age of Athens (5th century BC, when the Parthenon was constructed), through the Hellenistic era (that’s the 4th-1st centuries BC, encompassing the era of the kingdom of Macedon and Alexander the Great), the Roman era (1st through 4th centuries AD – from the pagan world of the ancients to the dawn of Christianity), and the beginning of the great Byzantine Empire. 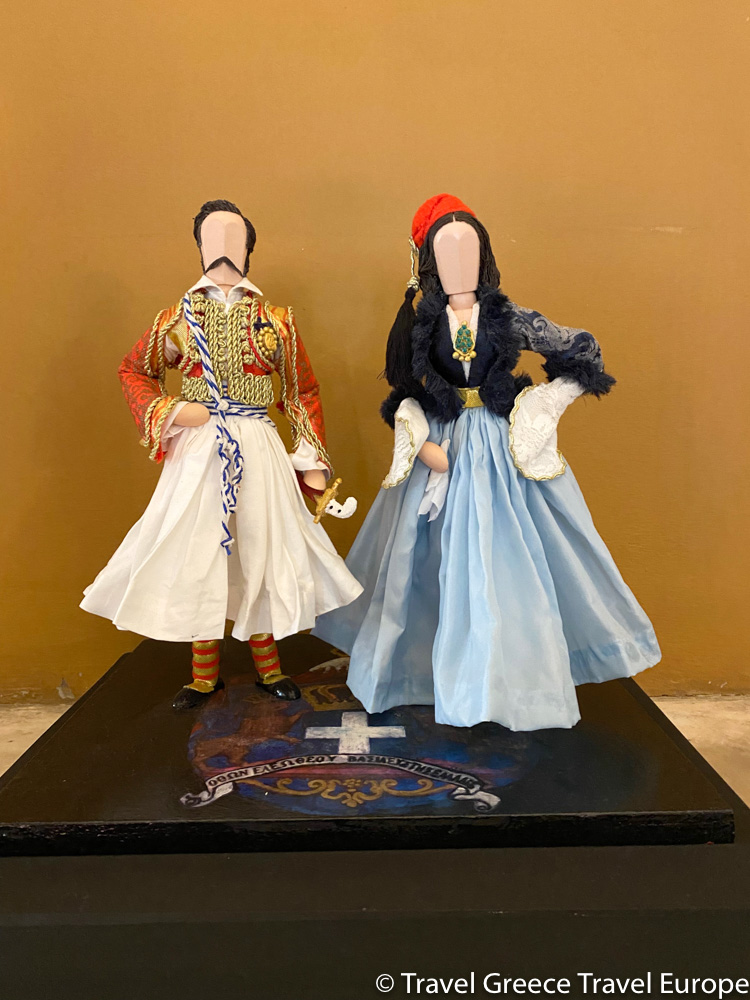 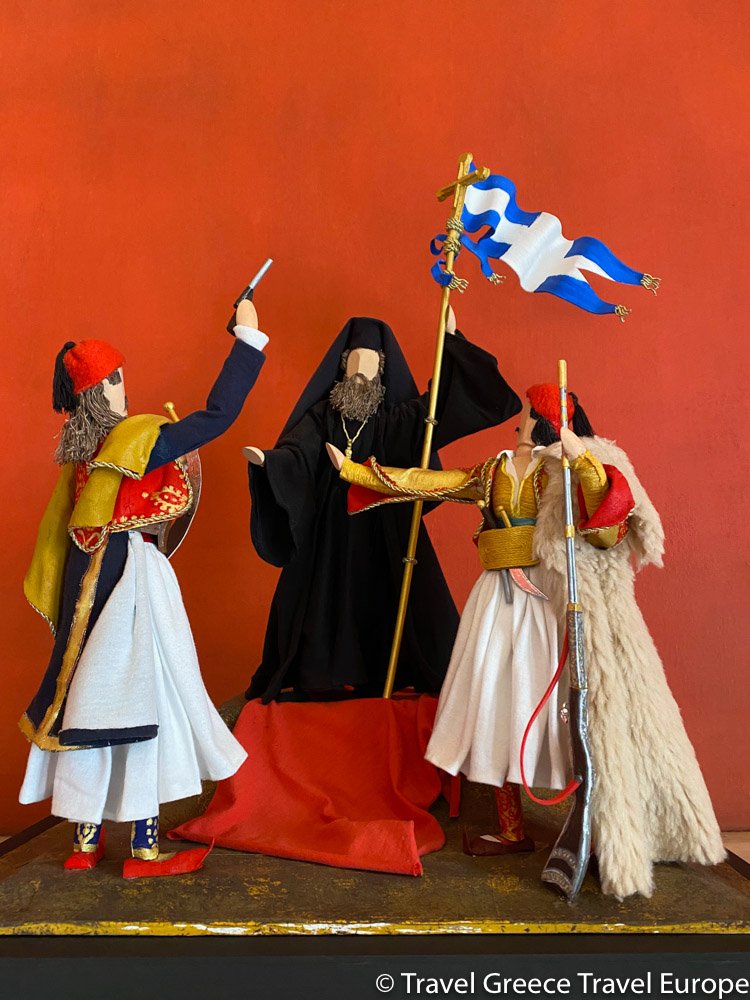 What You’ll See at the Numismatic Museum of Athens

Greece in the Ancient World, as you know, was organized into a powerful network of great City-States. Coinage from them all represents the famous kings and rulers in great detail. The Roman republic too is on full display, with the likenesses of Roman Emperors and the provinces of the vast empire represented. In turn, the Byzantine emperors and provinces are also represented in beautiful displays. 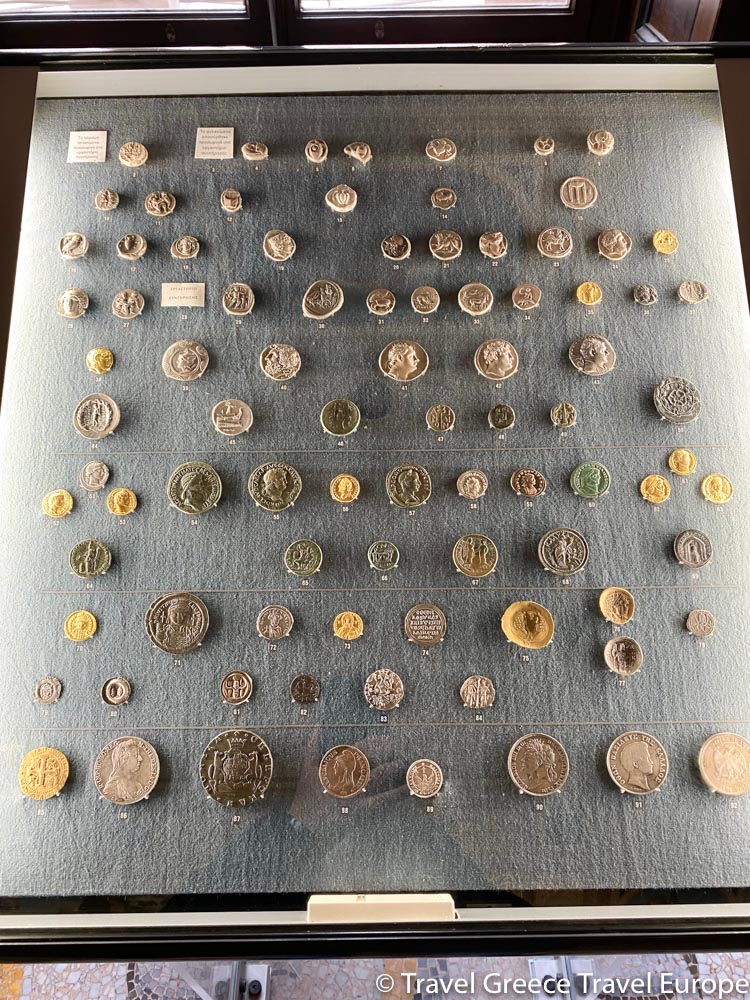 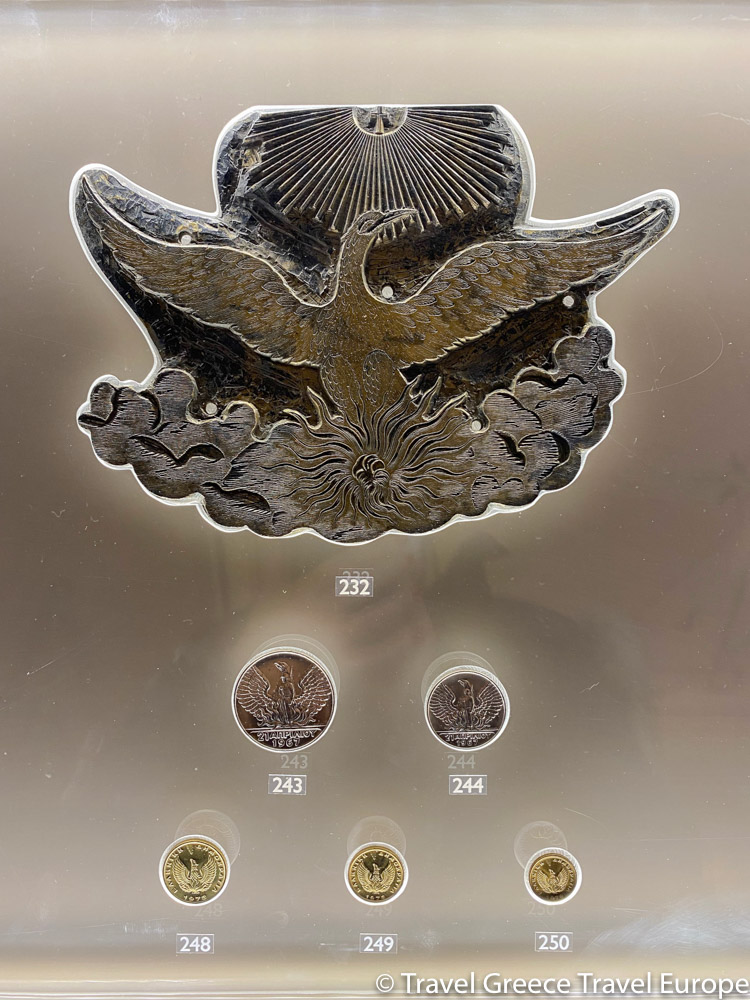 This coveted part of the world was often conquered and occupied through its long history. Among the conquerors were the Franks – this term covers the Christian Latin occupations of the Venetokratoria – the rule of the Venetians, and the Franckratoria – of the French and the Franks, dating from the 4th crusade at beginning of the 13th century (1204). 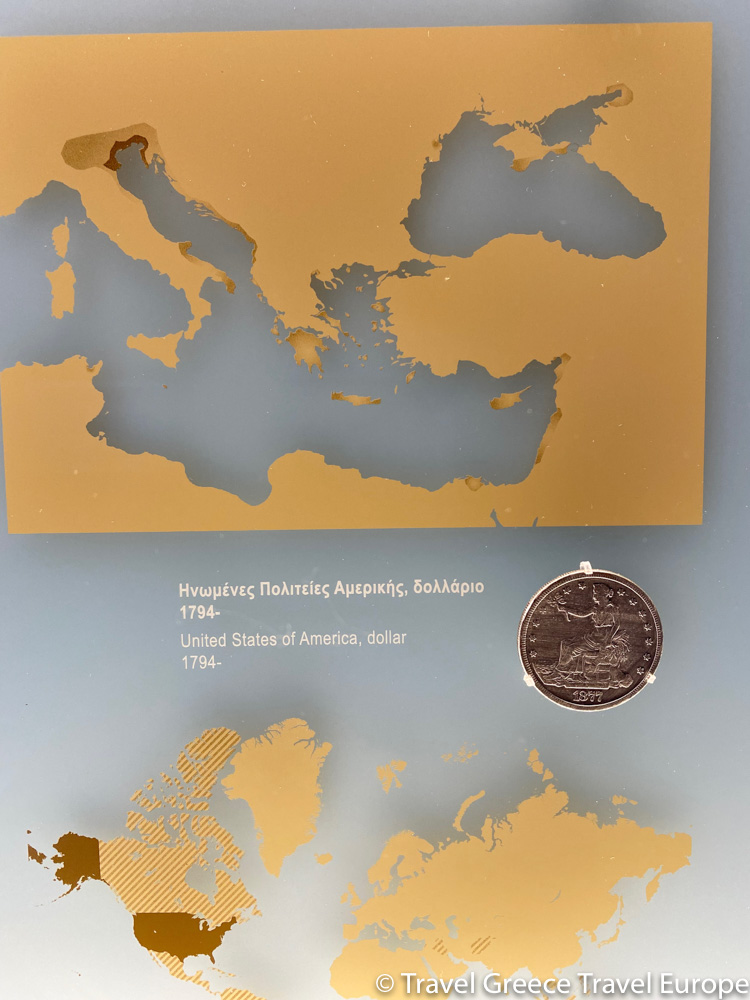 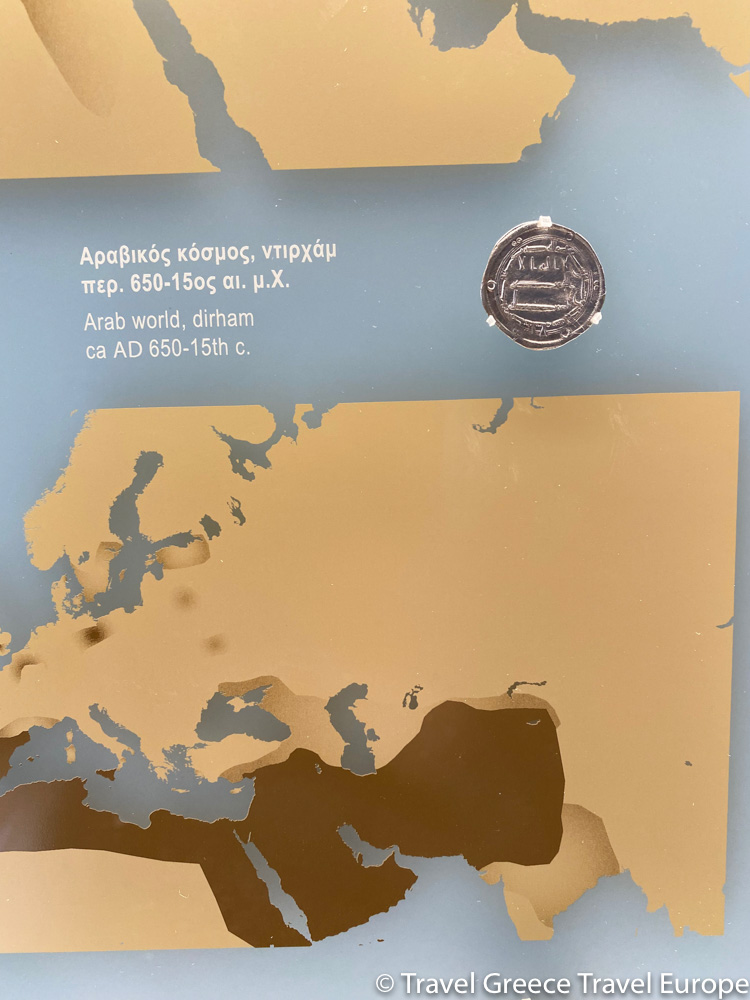 From the 15th through the 19th centuries, Greece was occupied by the Muslim world as it was encompassed y the vast Ottoman Empire. Related coins and objects illustrate this long period of history for the visitor. 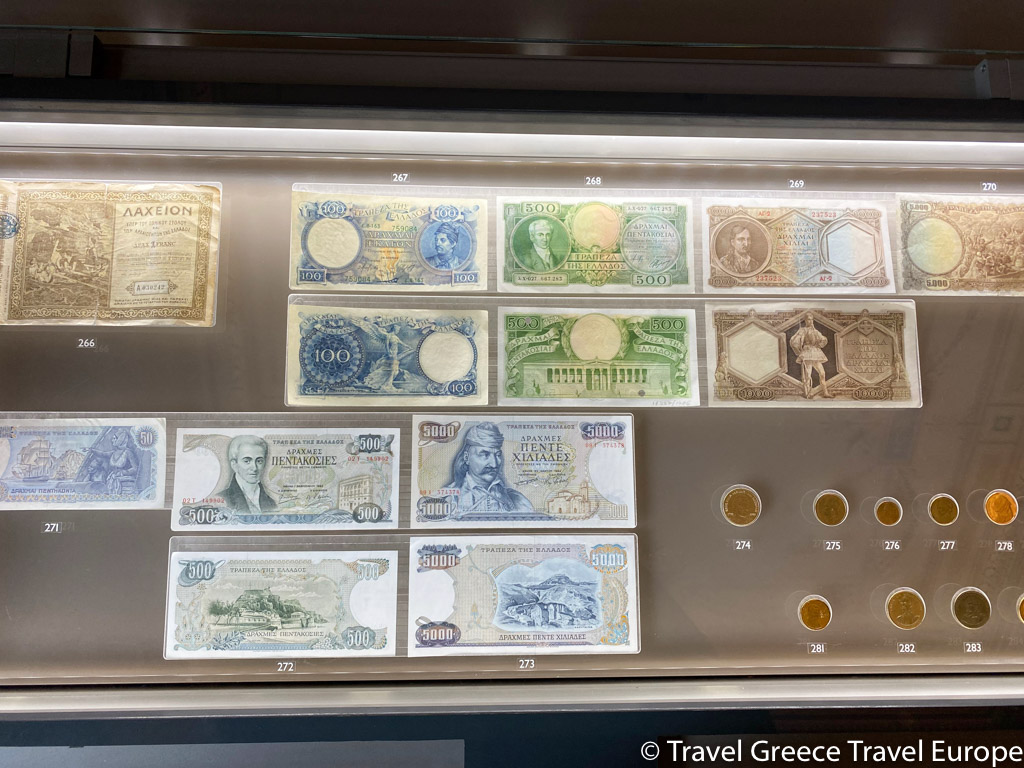 After the War of Independence and the establishment of the Modern Greek State, we see the triumphant return of the ancient Drachma in coin and on banknotes.

Locals often visit the Illiou Melathron to catch up with their friends over coffee, drinks, and light snacks in the charming garden cafe. It’s a perfect [lace to refresh yourself and unwind during a day of sight-seeing in Athens. There are also often events here, such as garden concerts. Check the museum’s website for details. 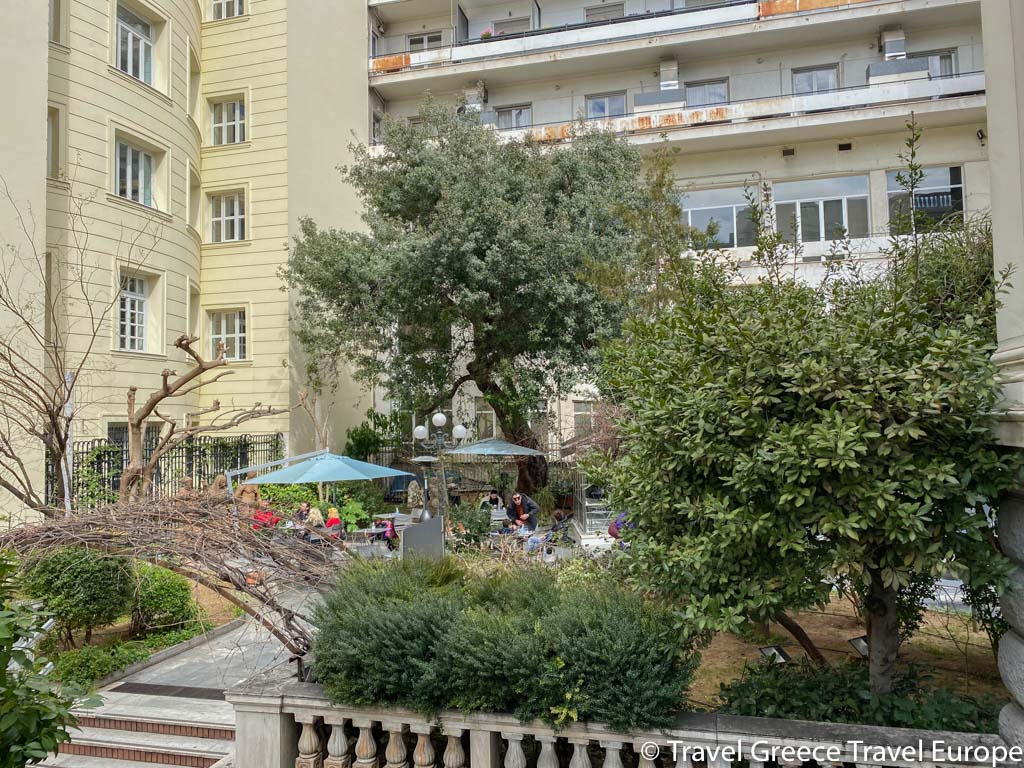 How to Visit the Numismatic Museum

The Numismatic Museum is easy to find, in the very heart of the historic center of Athens, mere steps from Syntagma Square (less than five minutes on foot). The Museum is open Wednesday through Sunday, 8:30 am to 3:30 pm. But it’s always best to confirm hours on the website above before visiting.

The admission costs 6eu/ 3 eu reduced. Also, it is included on the specially priced 15 eu ticket, which is valid for the Archaeological Museum, the Epigraphic Museum, and the Byzantine and Christian Museum.

Near the Numismatic Museum

Continuing along Panepistimiou Street another five minutes will bring you to the famous Athenian Trilogy: The National Library, the Academy, and the University, the work of Danish architects Christiand and Theophil Hansen (Ziller was a pupil of Theophil Hansen).

For another beautiful experience of Athenian neoclassicism, a three-minute walk from the National library will bring you to the Loverdos Mansion, Ziller’s own home, which is open 8:30 am to 3:30 pm daily except for Tuesday. Unlike the buildings of the neoclassical trilogy, you can wander around inside and explore; it’s marvelous, and the admission is free.