Paris is one of the world’s art capitals where every form of artistic expression can be sought out and appreciated.  Here’s a look at some of the artsy things to do in Paris. 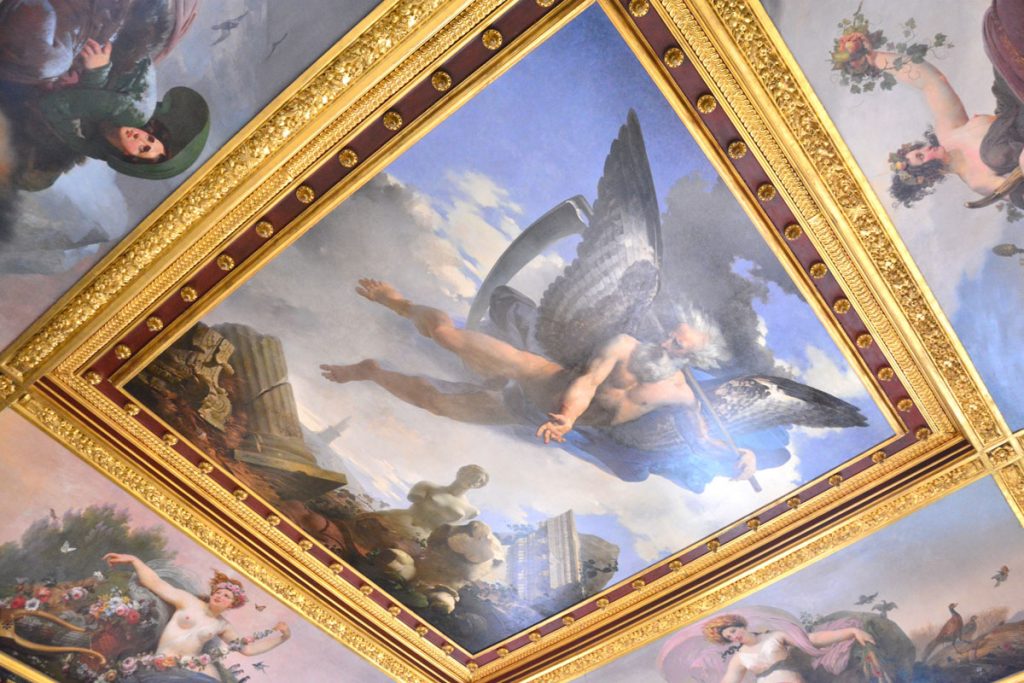 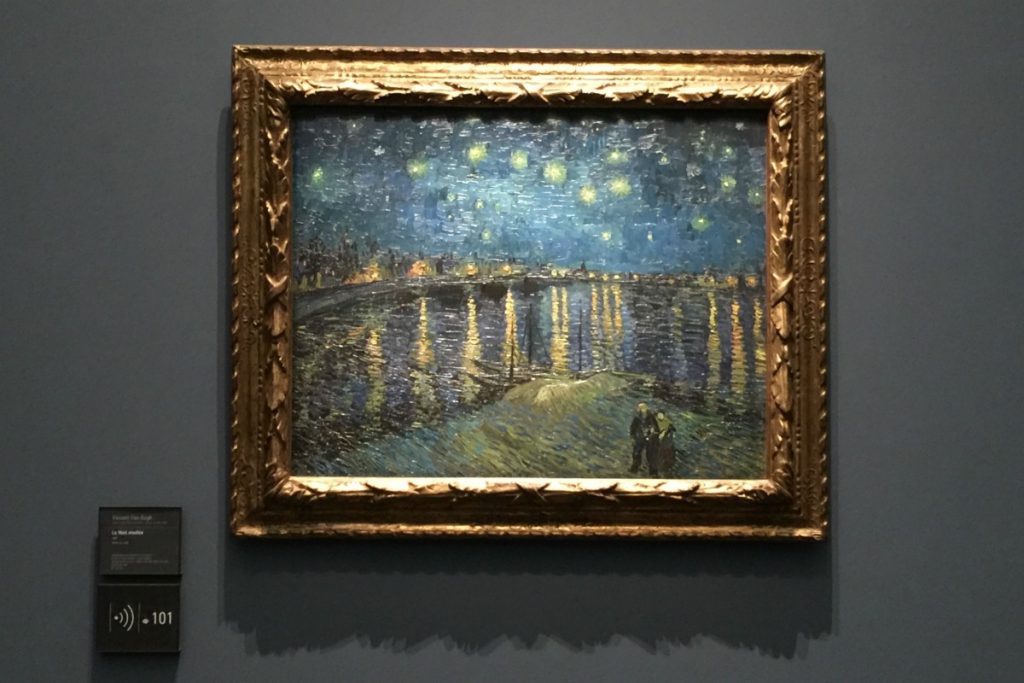 At the Musee d’Orsay.

Paris offers everything for a visitor looking to get a taste of a world that has famously inspired writers, painters, actors and all types of creators, designers and producers.

Paris is chic, Rococo, avant-garde, beatnik, bohemian, contemporary and modern all at the same time.  Exploring the artsy things to do in Paris is about discovering another layer to a city known for its light and love.

If you’re a book nerd like me, you’ll have to stop at Shakespeare & Company which is one of the most famous English language bookshops in the world.  It has been a source of inspiration for writers and readers for decades. Volunteers help and even sleep in the shop to keep it up. I loved perusing the shelves of its reading rooms. 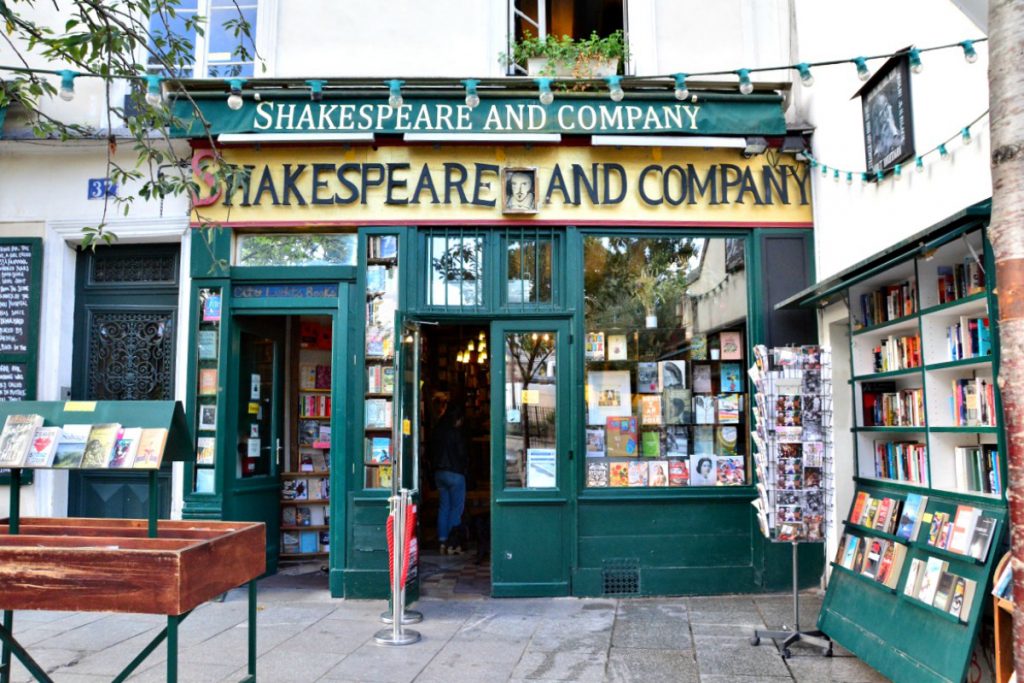 Besides Shakespeare & Company, there are other beautiful book shops to check out. Time Out Paris has a great list of their top 100 bookshops here.

Comedy is art and Paris has a lot of it in the form of stand-up comedy shows. For tourists, French comedian Oliver Giraud’s often packed, English-language show called “How to Become Parisian in One Hour” shines humor on those funny situations he has come across in taxis, bars, restaurants, hotels and the metro. 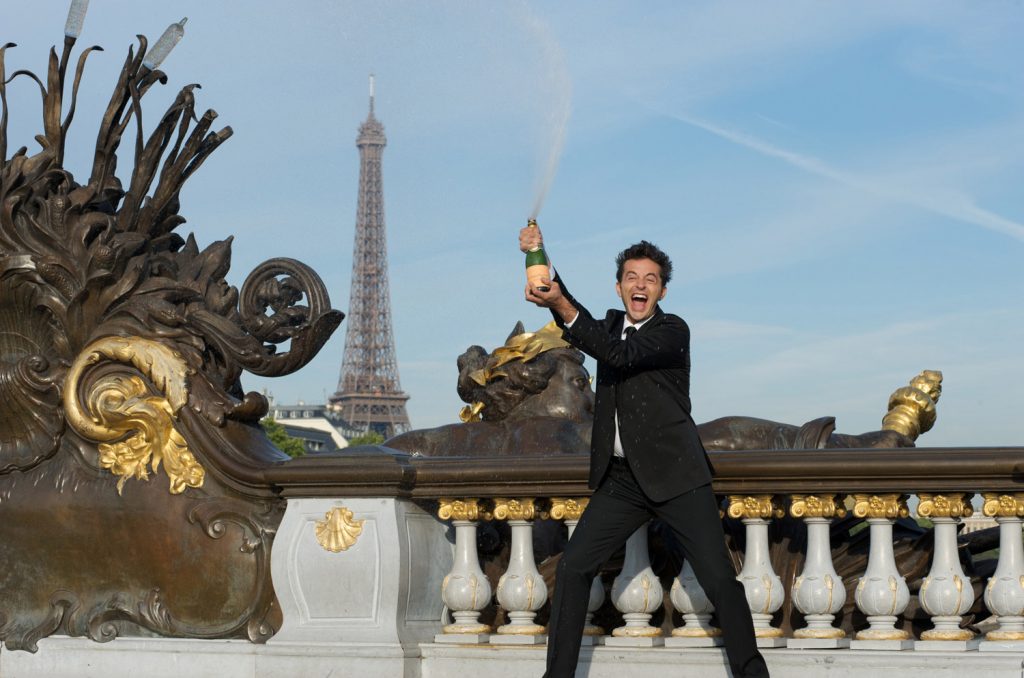 The one-hour performance will also teach you some French – in a pretty amusing way. You decide for yourself! For more information, visit: www.oliviergiraud.com

Take a flanér (stroll or walk) through the pebbled and cobbled lanes of Montmartre.

The small – but now very touristic – village sits on hilltop in Paris boasting a pretty impressive panorama which is one reason why it is still one of the most popular and one of the oldest places to visit in the city. This hill was also once home to Parisian artists. 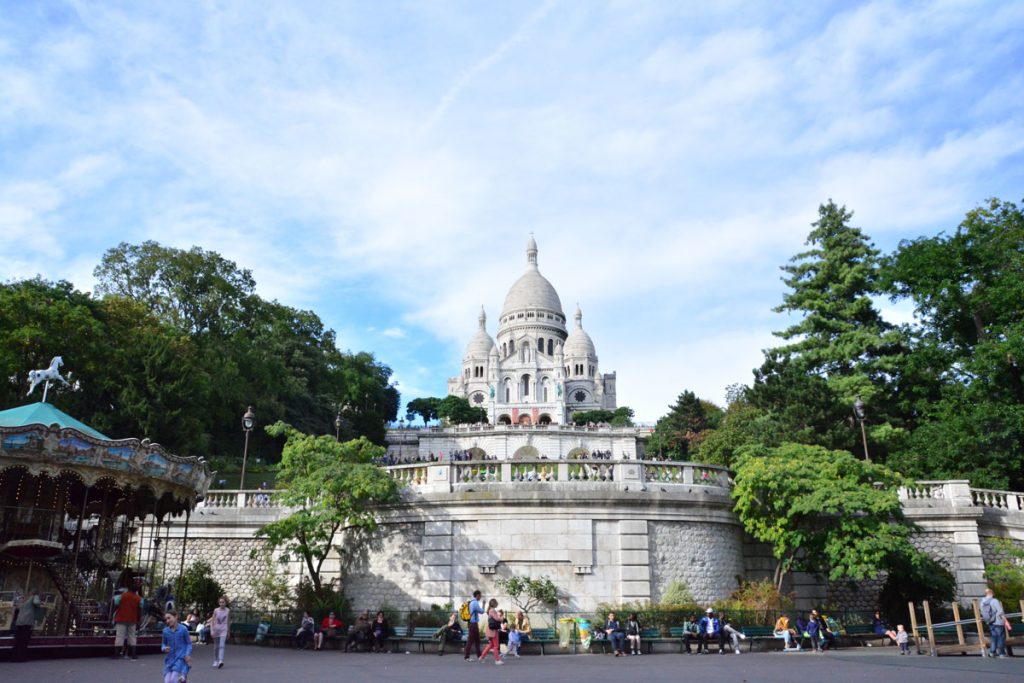 Today, lots of painters and sketch artists are planted in the square ready to draw or paint you should you if you want such a souvenir. You’ll also find the Basilica of Sacre-Couer in Montmarte.

Artsy Tip: While in Montmarte, head for the Salvador Dali Museum. Here you’ll find Dali’s art and drawings including sculptures of clocks and watches.

Spend Time at the Best Art Museums of Paris

A city’s passion for art is often reflected in its quality and breadth of museums. In Paris, there is a vast number of them – over 100 – which is one of the highest concentrations of museums in the world. 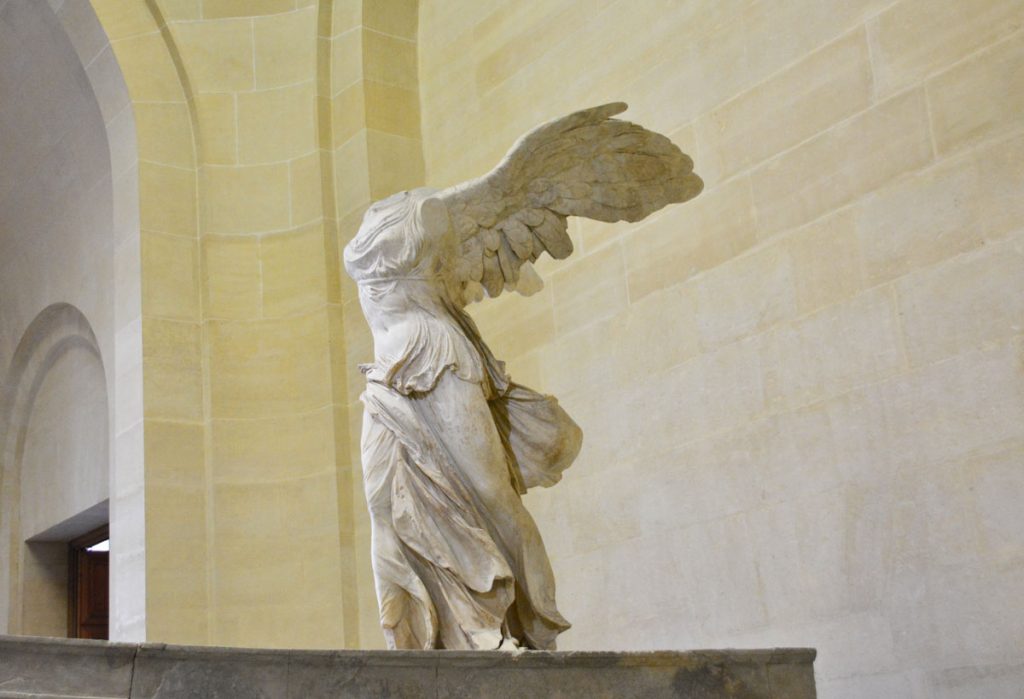 Winged Victory of Samothrace at the Louvre

The Louvre, the Centre Pompidou and the Musée d’Orsay are the most popular. The Smithsonian breaks it down for you and lists the five must-see art museums of Paris here.

Go to the Best Art Galleries of Paris

If you love contemporary art, Paris is the city to experience it at its finest.  The Culture Trip lists established up-and-coming contemporary art galleries in Paris here. 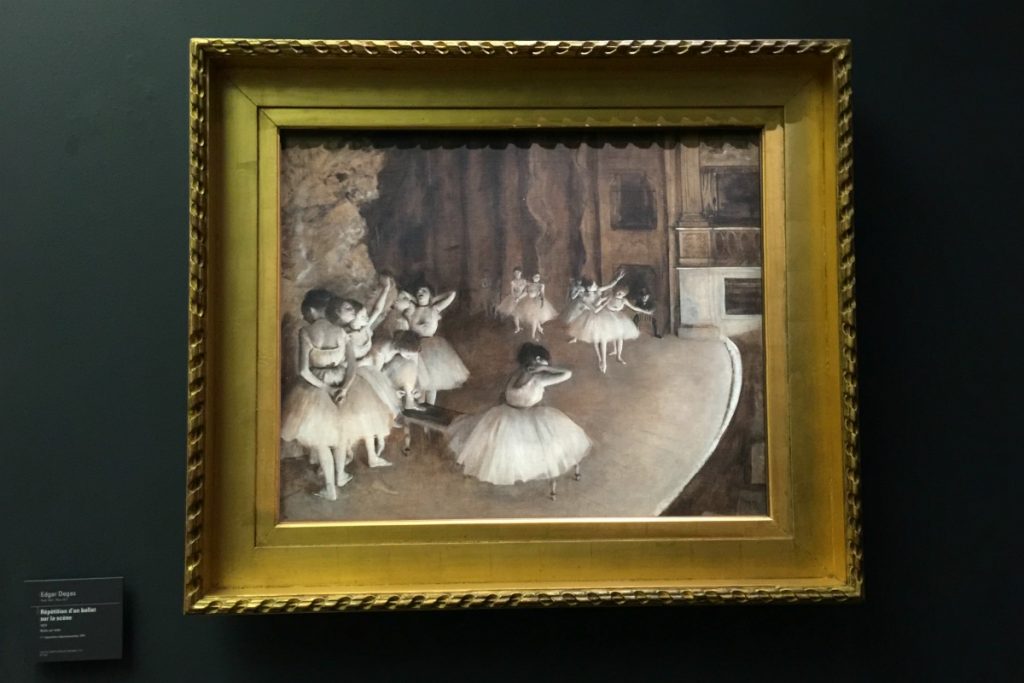 As the stomping grounds for so many artists, beatniks and musicians over the centuries, Paris is full of atmospheric artsy hangouts where anyone who needs a break or good conversation can order an apéro (pre-dinner drink) and watch the Parisian world walk by.

Cézanne, Picasso, Ernest Hemingway and Jim Morrison hung out at Cafe La Palette.  Au Petit Fer a Cheval is a charming horseshoe-shaped bistro in the beautiful Marais district which captures Paris’ café society. In the lovely Saint Germain des Prés area, grab a table at Café de Flore which  is one of the oldest coffeehouses in Paris.

Paris is dotted with tiny cinemas with quaint and oh so charming exteriors. They are the perfect local artsy thing to do in Paris for cinephiles. La Pagode is considered a historic monument and so is La Cinémathèque Française. Cozy options include Le Brady and Le Desperado.  Note that you probably should know some French before you commit since there won’t be any subtitles. Films are shown in original languages. So, if you love French language, time to learn!

Paris has its share of impressive street art. That’s something I noticed while taking a Paris city bike tour during my last trip. 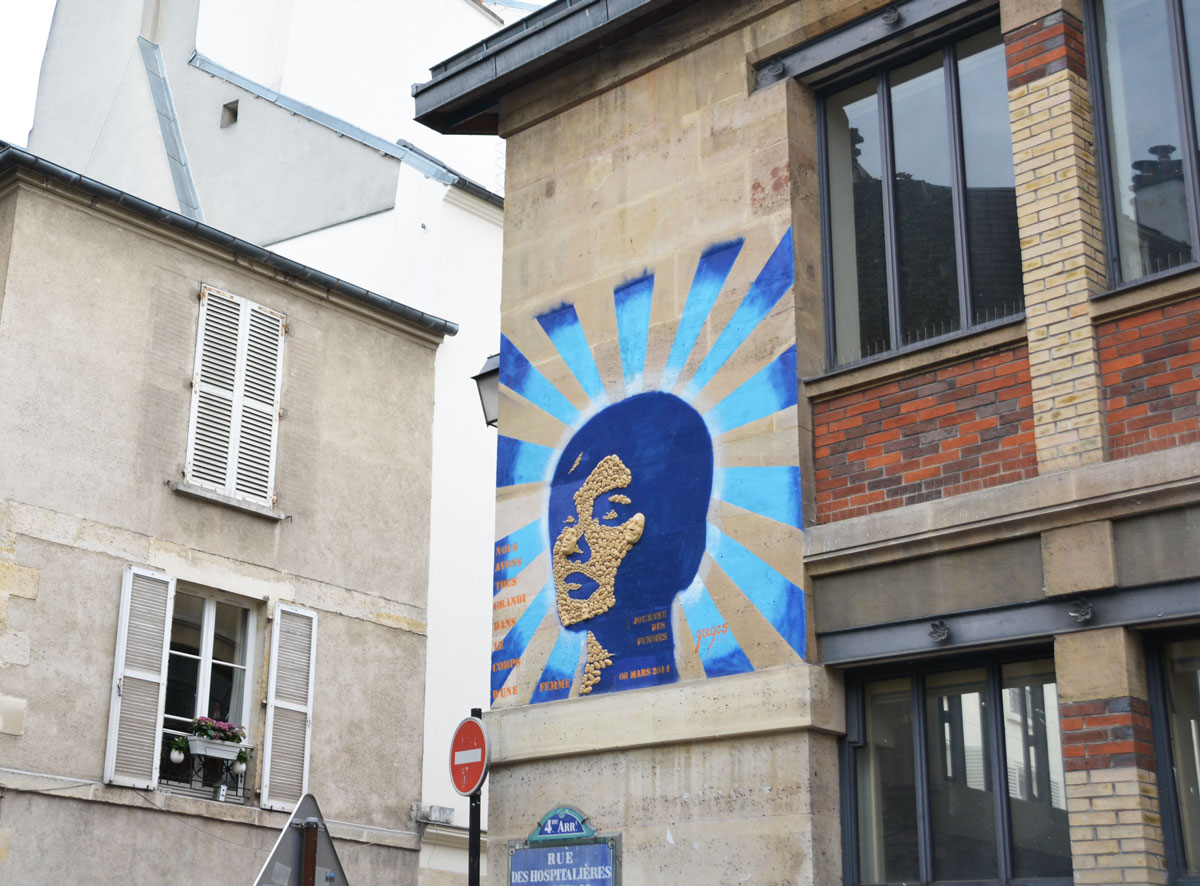 If you want to see more street art and learn about the stories behind the street artists’ talents, take a guided walk with  Street Art Paris.  You’ll step into districts you may not have thought of exploring in the first place.

If you’re ready to go on an artsy journey, head to Yatra’s Singapore Airlines Ticket Booking to book your next flight to Paris.

Have you ever experienced any of the artsy things to do in Paris featured on my list? Would you like to suggest something artsy to add?  I’d love to hear about it. Feel free to comment in the comment boxes below.

Tags: artsy things to do in Paris