Across Europe Across Greece Hotel Reviews Italy Southern Italy Where to Stay in ItalyOctober 5, 2014

A Sassi cave stay is a traditional experience you can only have in Matera, an ancient southern Italian city built into a rocky plateau.

The Sassi is the oldest district in Matera — a unique place. In 1993, it was declared a UNESCO World Heritage Site, a city where people had inhabited cave dwellings for 10,000 years.

Many people from various eras and times have made use of the natural earth around them creating shelters and homes in caves. In Greece, think Santorini.  I had stayed in wonderful Santorini cave hotels and apartments in the past — and loved it.

Like Santorini, Matera is another fantastic example of a troglodyte settlement in the Mediterranean.

I had decided to “cave it” too for my visit. I booked my cave apartment on AirBnB. 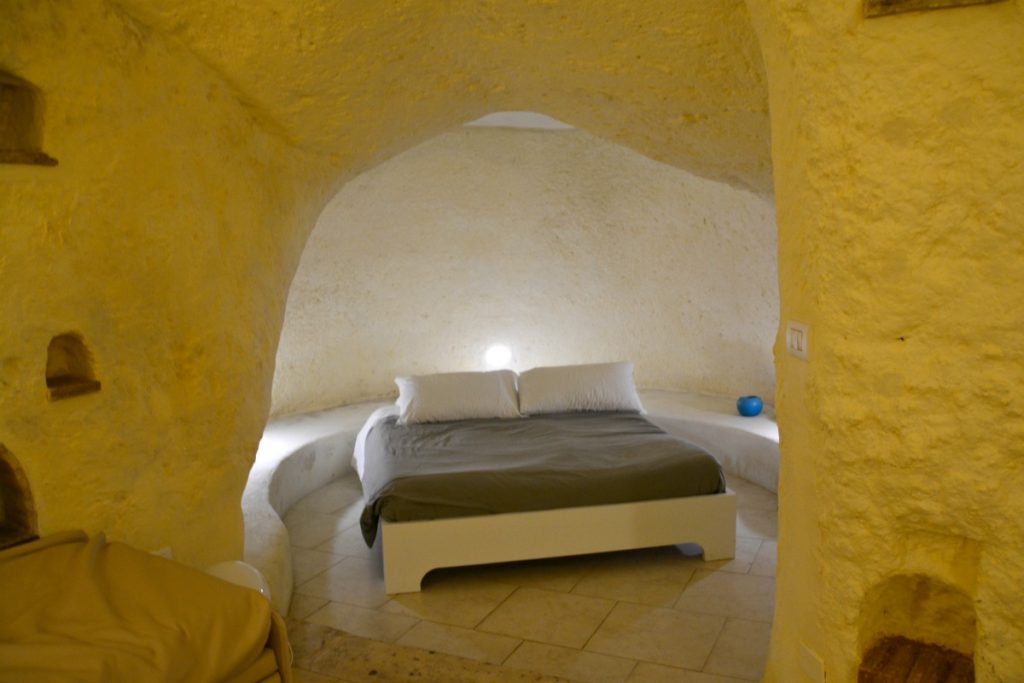 Earlier in the 20th century, Matera was considered the “shame of Italy,” due to the poverty and the deplorable conditions people lived in which spread diseases like Malaria. Imagine, that was up until the 50s.

In the 80s, the government forced the community out of their humble dwellings to modern apartments.  Think about it, the townspeople lived with their large families and even their livestock. Those days are gone. Now Matera is going through a rebirth, a shining destination in southern Italy for its history and unique beauty.  As a result, those who own these old caves are transforming them into hotels and B&Bs so visitors can experience what it is like to stay in a cave. 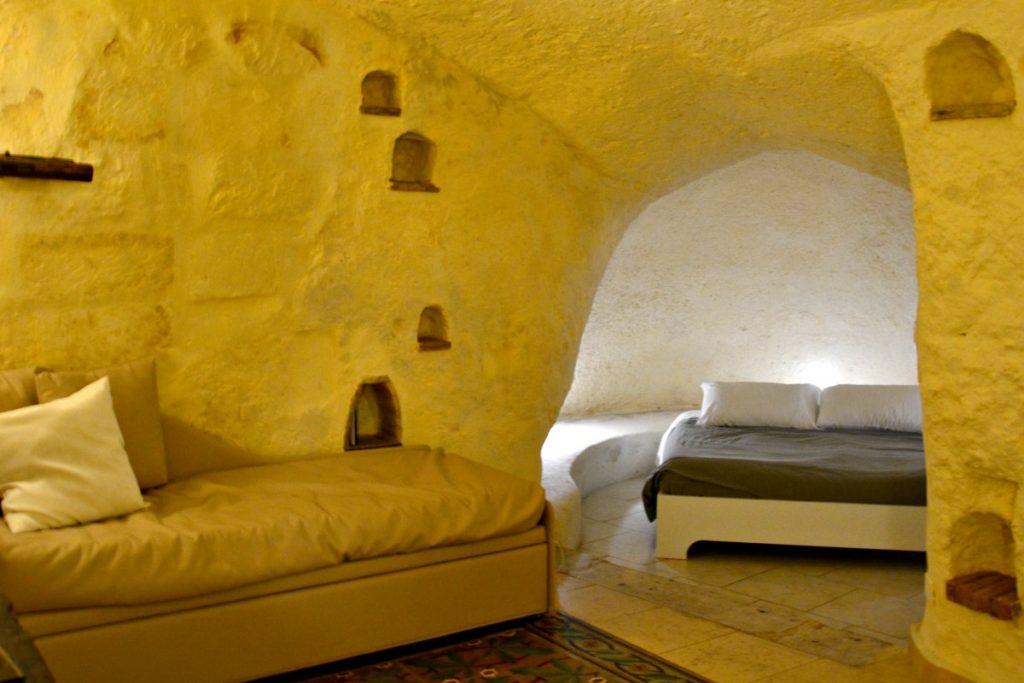 Why Book a Sassi Cave Stay

Here are a few reasons to book a Sassi cave stay:

It’s stylish. More of these caves are now being converted with amazing architectural style and all the modern amenities you could imagine.

It’s authentic. I mean when can you say you stayed in an ancient cave in the middle of Italy?

It’s unique. Staying in one of Sassi’s caves means you are right in the heart of the historic district where you can just start walking about to discover the town’s winding stone path alleys.  A larger city has grown around the periphery over time.  However, the historic Sassi is a special place – the ancient center of it all.

The one possible downside?

It’s slightly humid. I found my cave that way. Maybe that’s not all year round. It was end of September and a cold spell swept through the area. It didn’t bother me really. Mine was more underground so there wasn’t a window to open for some fresh air.  The difference with Santorini, was that once you open the door or windows fresh air came breezing in from the sea.

I also had a special experience my cave had a black hole. You see, the bathroom opened a gate that lead into another underground kind of cave. The pic above shows it lighted with a nice table in it.  I could have flicked on the light if I wanted to trek down there to hang. Well, I didn’t in the end.  The owner told me it was once a refrigeration unit since its colder the deeper you go down the ground.

Cave Stays Around the World

I’ve read there’s all kinds of possible cave experiences in the world like in Cappadoccia, Turkey and in the States in New Mexico. Like I mentioned earlier, there’s Santorini, Greece.

Have you ever stayed in a cave hotel? If so, what was it like?