Dreaming about traveling from the UK to Greece for your Greek island holidays? You’re one of one millions with the same thoughts. There’s no time like the present to start planning exactly where to you’ll be spending your summer days in Greece. 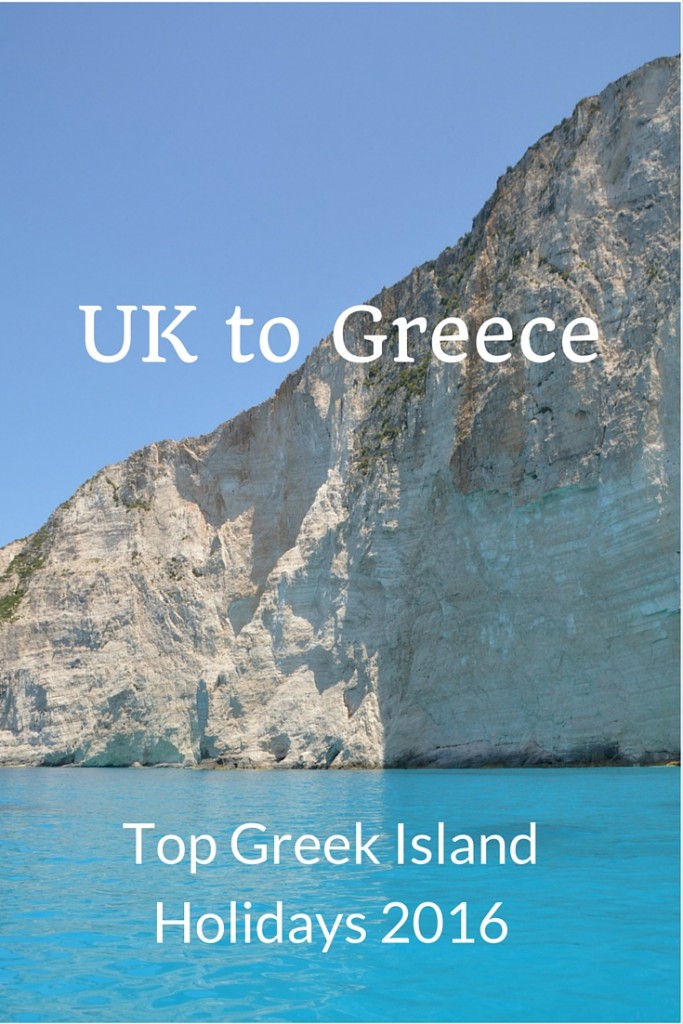 I recently interviewed Sunmaster UK about this very topic, a company that specializes in affordable travel to Greece. According to the Association of British Travel Agents (ABTA), more than two million British tourists visit Greece each year, a number that is only rivaled by Germany.

The lineup of all-inclusive holidays in 2016 by Sunmaster head from the UK to some of the most beautiful, relaxing summer destinations. Of course, that lineup includes the beautiful Greek islands.  Since there are many to choose from, Sunmaster called out the top five that British holiday makers love to explore.

Zante is a holiday destination that is so diverse it easily caters to those looking for fun summer nights to those that want a quiet beach time.   Zante, also known as Zakynthos, is located off the west coast of Greece in the Ionian island chain.

Laganas is the main “party” resort town on the island where clubs, bars and beach resorts line the coast.  Zante is also the home to one of the most photographed beaches in the world called Navagio or the Shipwreck Beach. Only boats can reach it. The abandoned ship sits on a spectacular white pebbled beach, surrounded by turquoise waters. The entire beach is framed by towering limestone cliffs. 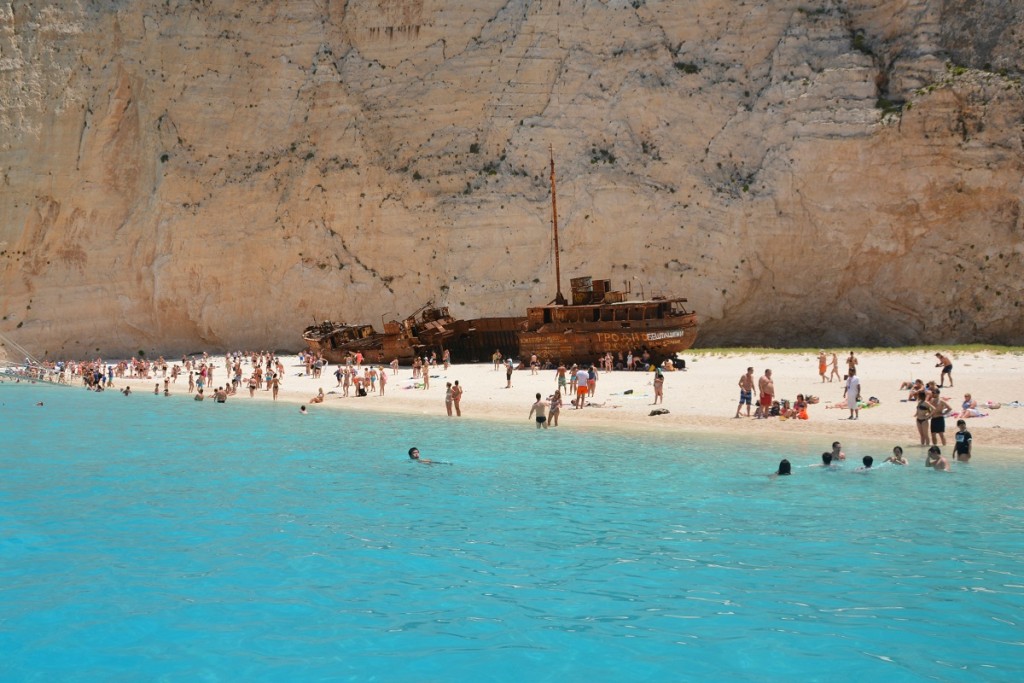 Kefalonia shot to fame as the gorgeous island backdrop for the 2001 Hollywood film “Captain Corelli’s Mandolin” starring Nicholas Cage and Penelope Cruz.  As the largest of the Ionian islands, Kefalonia has an impressive coastline length of 250 kilometers. It boasts some of the most notable and breathtaking beaches in Greece including Myrtos Beach, which is a long expanse of white rocks that border a turquoise sea.

During your Greek island holidays in Kefalonia, you can opt to explore the natural wonders of the island including Melissani Lake, Drogorati Caves, Koutavos Lagoon and the lush mountain range called Mount Ainos. Spend a day strolling through one of the island’s charming villages including Fiskardo, Sami and Assos.  The best cocktails and clubs can be found in the capital of Argostoli. 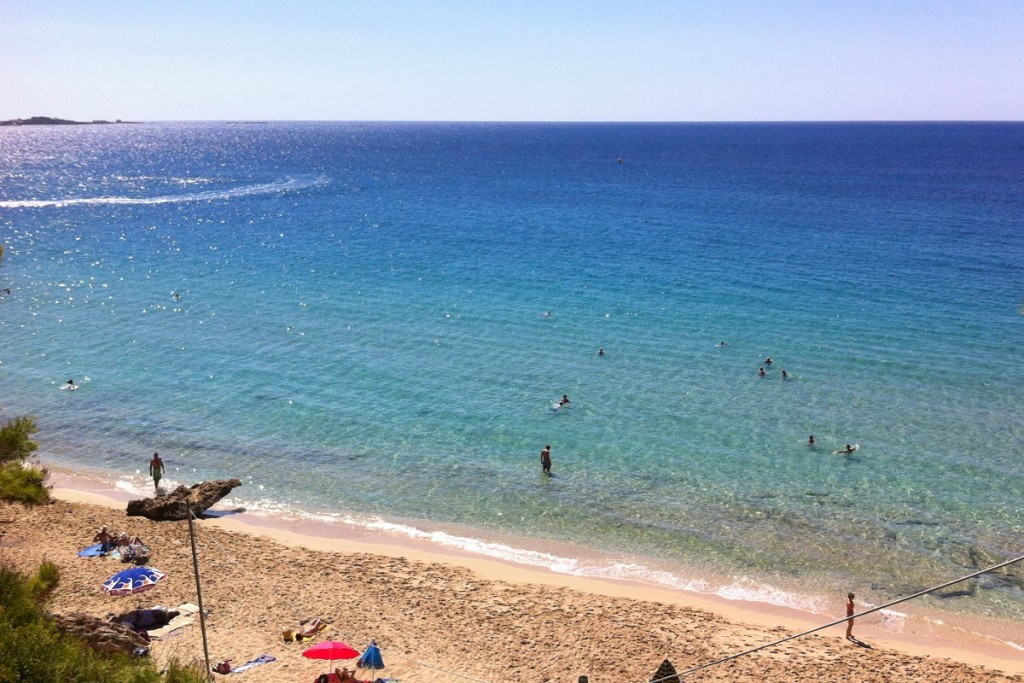 Kefalonia is one of the top Greek island holidays you can be on in 2016.

Rhodes is another popular island getaway. It’s a culture vulture’s dream escape.  Various civilizations settled on the island throughout the centuries. That’s why walking through its atmospheric Medieval Old Town, which been declared a World Heritage Site, is like a journey back in time. Discover its charming cobbled streets and Gothic architecture.  The magnificent Palace of the Grand Master of the Knights is a well-preserved medieval castle that once functioned as a palace, headquarters and fortress.

Another top site is the Acropolis of Lindos which dates back to ancient Greece. It is surrounded by a beautiful village lined with historic 16th century houses.  When it comes to beaches, there are too many beautiful options in Rhodes. The most popular are Kalathos, Faliraki, Tsambika, Ladiko and Lindos. 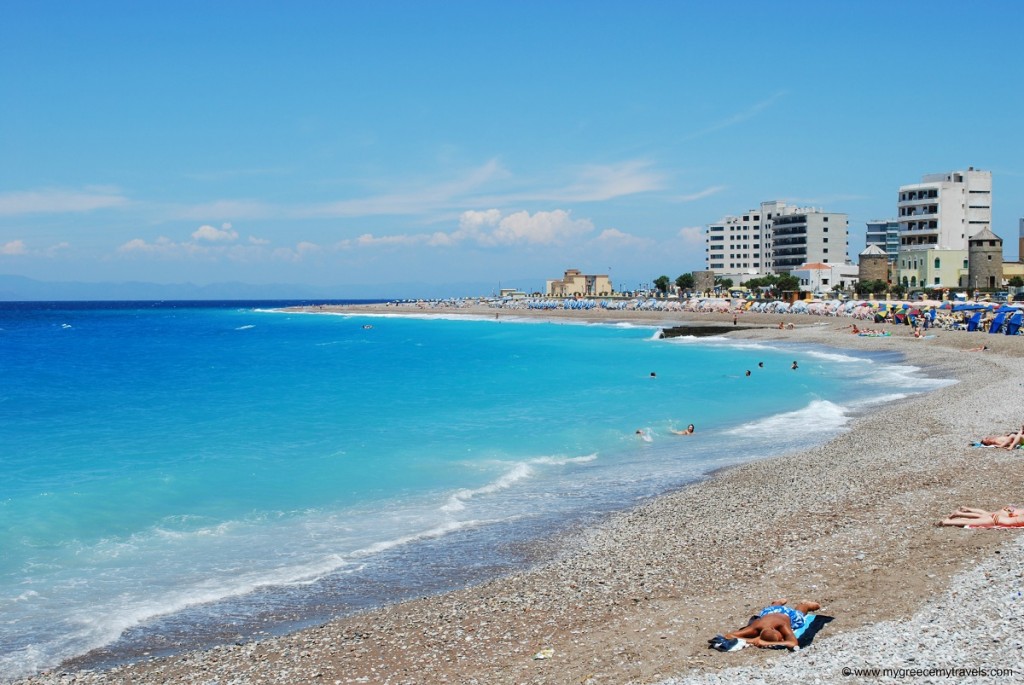 Rhodes has amazing beaches, a definite reason it is one of the top Greek island holidays this year.

There’s a reason Mykonos is one of the top island destinations in the world. Since the 1950s, its natural beauty, cosmopolitan character and vibrant nightlife have earned it jet-set status.  Those looking for a calm getaway love its wide selection of picture perfect beaches. Some Mykonian beaches cater to all types of vacationers including party lovers, families to nudists. 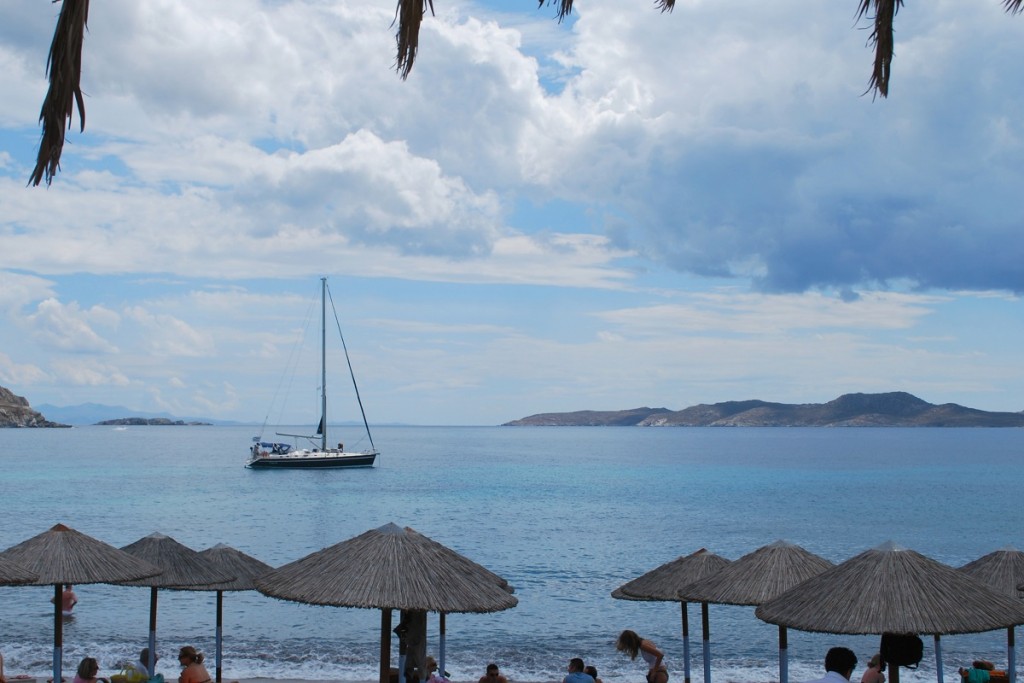 Mykonos maintains a traditional side. You can visit its whitewashed windmills and small Orthodox churches. Its main town called Chora is perfect for shopping and strolling. It’s also full of great restaurants and nightlife options. Mykonos’ Chora is one of the most well-preserved traditional villages in Greece. The tiny island of Delos, just off the Mykonian coast, is worth a day trip. It was once a magnificent ancient Greek city and it has been declared a UNESCO World Heritage Site. 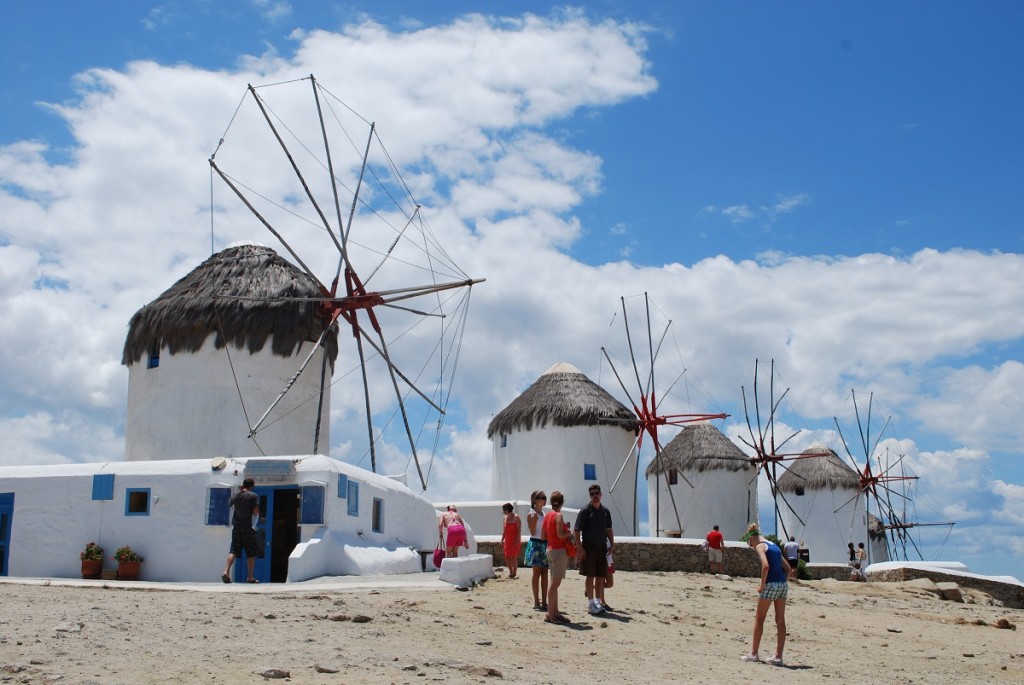 Considered one of the most unique island settings in the world, Santorini is a destination for those who love to revel in beauty.  The sight of Santorini’s flooded caldera is simply breathtaking. The volcanic crater sits deep in the Aegean and can be viewed perfectly from the clifftop towns of Fira and Oia. The crescent-shaped island is famous for its blazing sunsets. Thanks to its volcanic nature, the island is home to unique volcanic beaches with black, grey, red and amber sand. 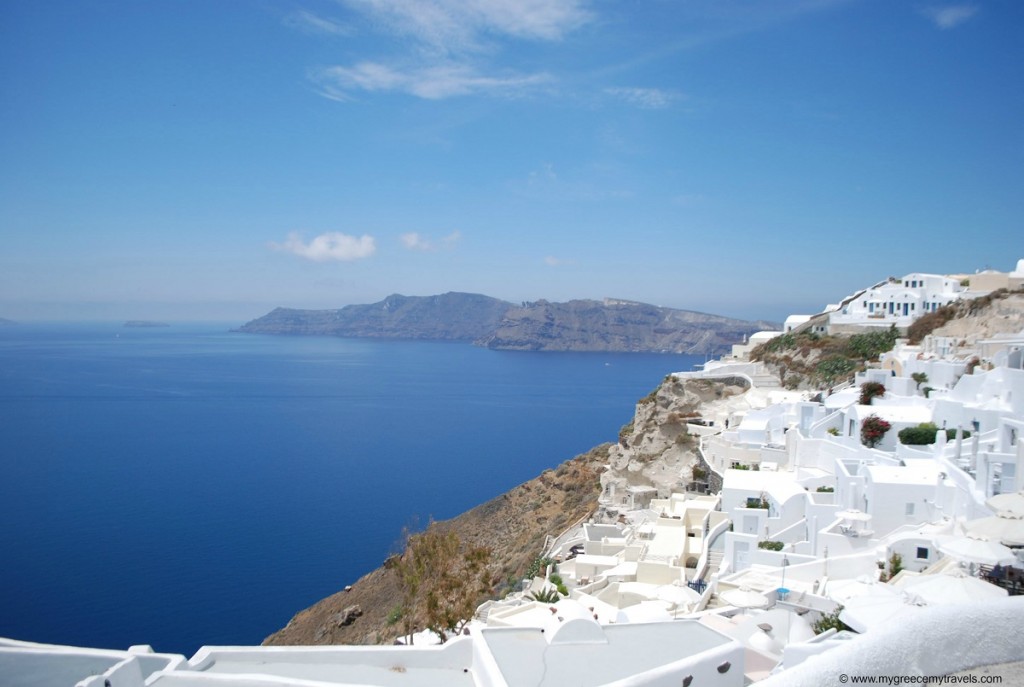 Many of Santorini’s hotels, restaurants, cafes and businesses are built into traditional whitewashed caves offering spectacular views. There are an array of beautiful bars and lively clubs to enjoy a drink or two.  Food and wine lovers adore the local gastronomy. The volcanic soil produces excellent fava beans, tomatoes and white eggplants, ingredients found in delicious local recipes.  The island’s blooming wine industry has led to the opening of several island wineries open for tastings.

Planning Your UK to Greece Getaway

Greece has so many islands that British travelers and travelers from all over the world love.  The five listed are just some of the most popular Greek island holidays to consider.

Enticed by any of the photos above? If you’re planning to travel from the UK to Greece this summer which Greek island would you love to spend your holidays?

*This post was written by My Greece, My Travels for Sunmaster UK.