Bergamo is a tale of two towns.

An airport line bus whizzed us past the modern, organized streets of the Citta Bassa, also known as Bergamo’s Lower Town.

We transferred to a cable car station and soon we were gliding to the top of a hill. We unloaded ourselves into the heart of Bergamo’s Citta Alta — another world from what we just saw minutes earlier.  There I was surrounded by what I have come to love most about European travel: old world charm born of rich history.

I managed to balance my attention between the colored window shutters, century old doorways, and centuries’ old public squares. I wanted to shoot a picture of everything.

The Citta Alta maintained a moody scenic beauty despite the hard downpours that soaked the stone buildings and alleyways. 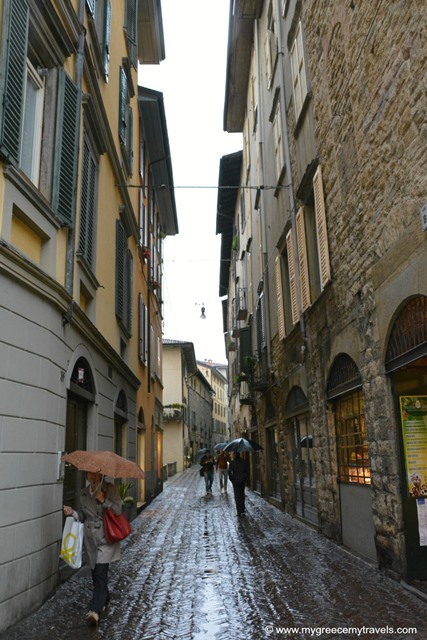 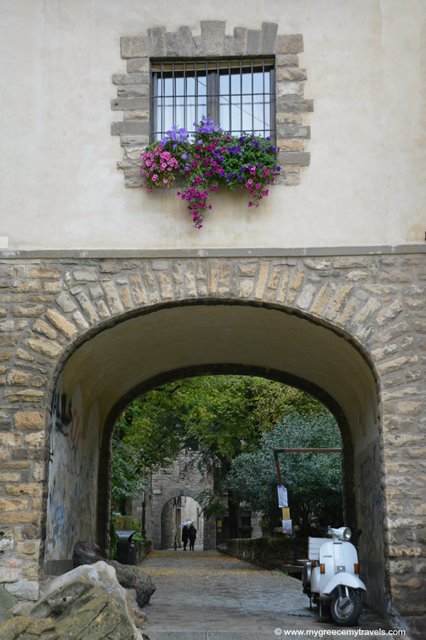 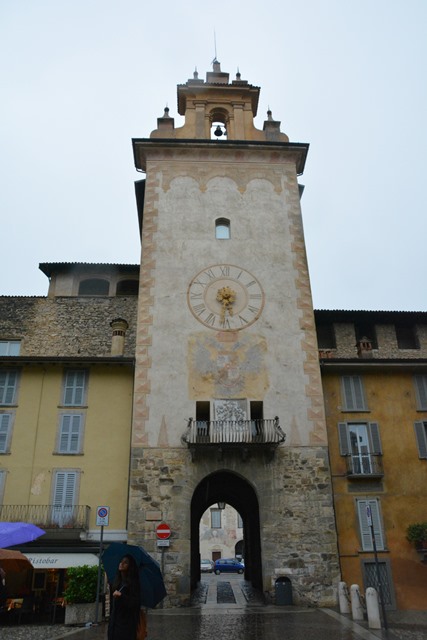 I immediately compared Bergamo to Matera in my mind. I was walking through an off-the-beaten Italian city, virgin to the fame of Italy’s best known destinations.

Citta Alta: A History of Bergamo

Bergamo’s obvious architectural feats took centuries to build. The Venetians ruled from the 15th to 17th centuries. During that era, a thick stone fortress was built to protect the city. History was around every corner.

The Piazza Vecchia is the Cita Alta’s main square, which dates back to the 12th century. It is one of the upper town’s most significant historic landmarks. Lined with some cafes and restaurants, it seemed to be a lovely meeting place day or night.

Bergamo Piazza Vecchia in the rain.

The Bergamo Cathedral was built in 1459 and was dedicated to the city’s patron saint, Saint Alexander. It featured interesting neoclassical touches on its exterior.

The Colleoni Chapel’s unique, soft pink-toned stonework made a particular contrast with its remaining grey exterior on the rainy day we visited.  It was built between 1472 and 1476 to honor the saints Bartholomew, Mark and John the Baptist.

The Colleoni Chapel was also a personal shrine for a wealthy local named Bartolomeo Colleoni, hence the name. Right next to it stood the circular shaped Colleoni baptistery.

The Basilica di San Maria Maggiore boasted a Romanesque façade with rich frescoes in its interior and was founded in 1137. 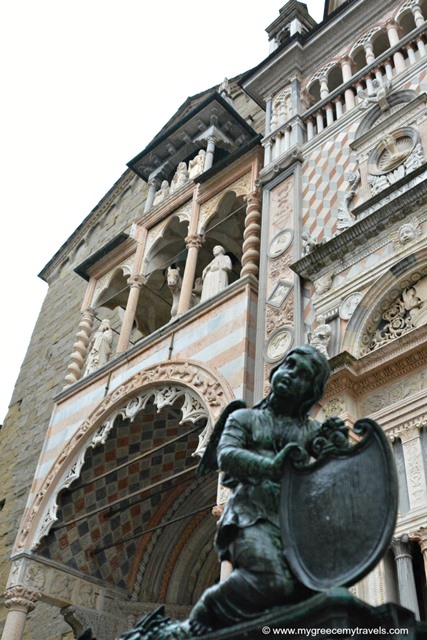 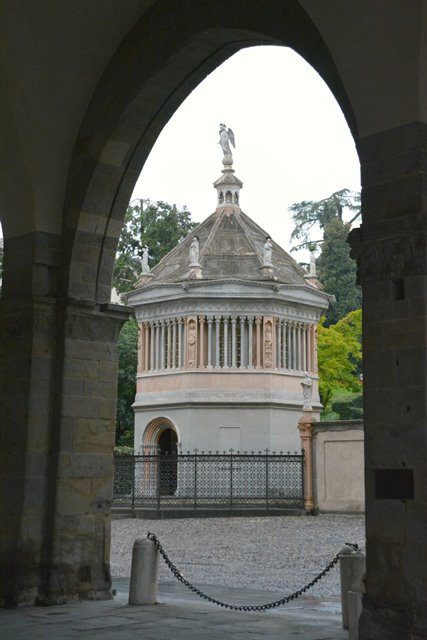 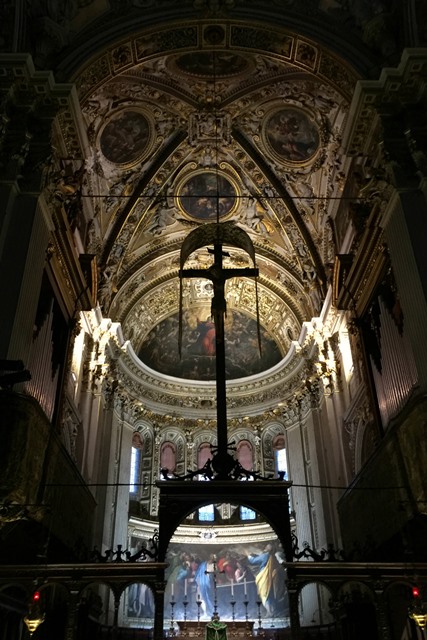 It was built as the administrative center for Bergamo in the 12th century.

The 13th century, 53-meter tall bell tower had a modern feature: a little elevator that reached the city’s famous bell. From there, we snapped panoramic (but cloudy) shots of the Citta Alta. 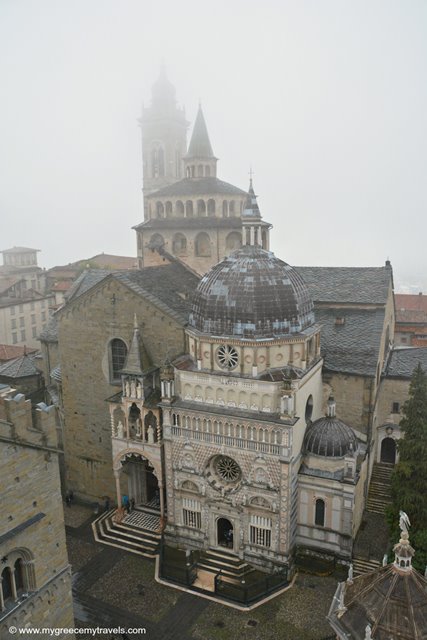 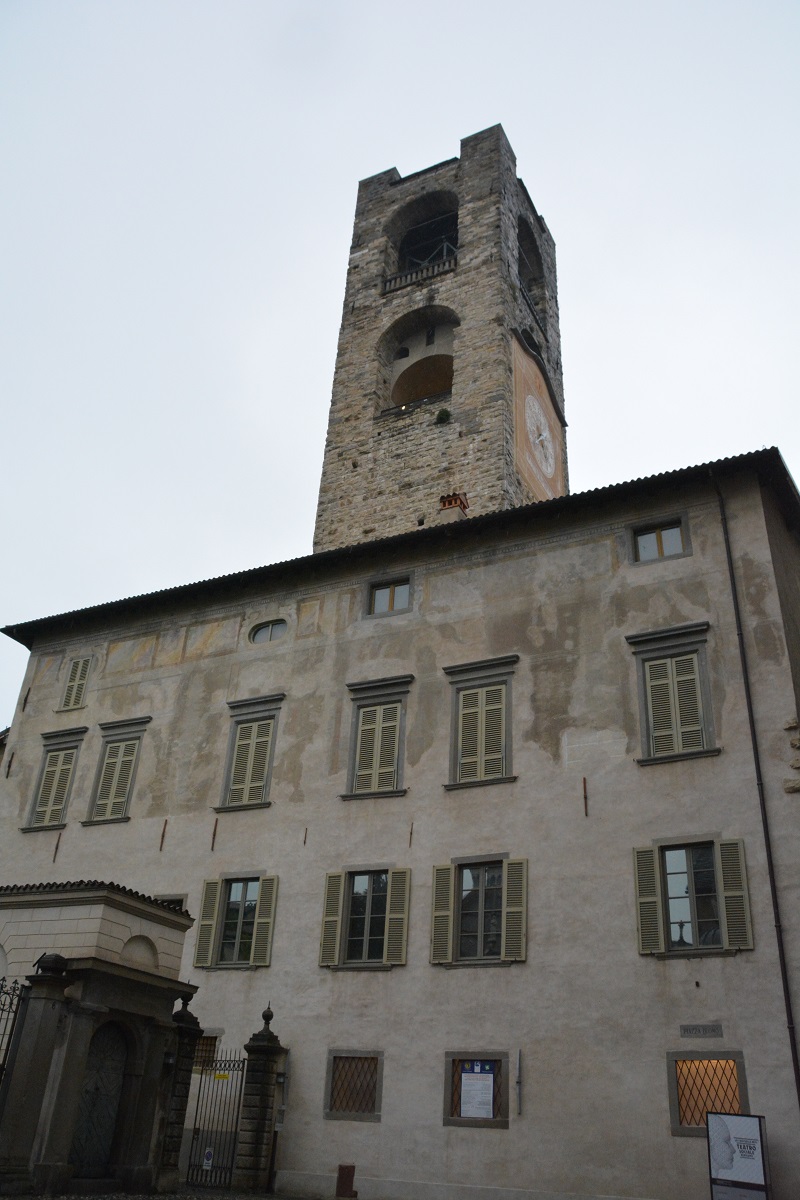 Over the centuries, the Bergamo bell chimed to inform citizens about enemies approaching, emergencies and meetings.  Bergamo once had an evening curfew and the bells alerted everyone the city gates were closing.  The bell continues to chime today to keep up the long standing tradition of its use.

The Carrara Academy turned out to be a big highlight.  The beautiful galleries are home to some of the Italy’s leading provincial art collections.  Our guide pointed out paintings that told fantastic stories of the transformation of European art, society and culture. The oldest works date back the 15th century. 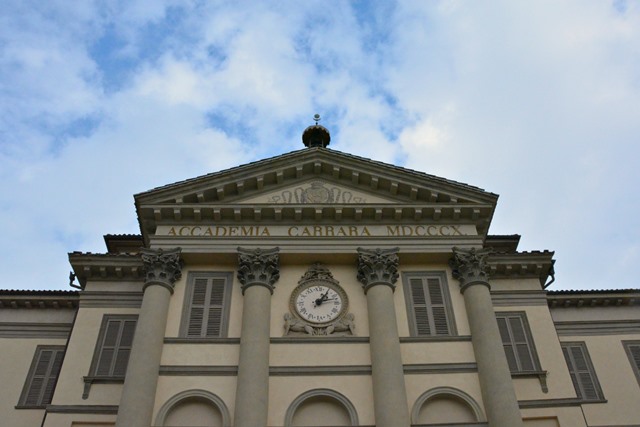 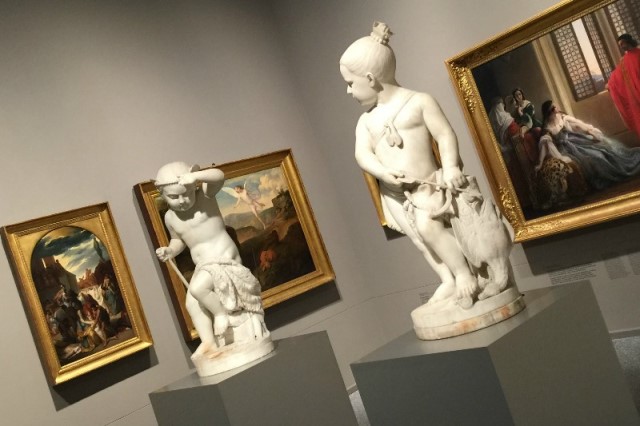 The academy was located outside of the old historic district, just a short scenic walk away. On the way to and from the museum, we had a great view of the lush green public spaces, a panoramic view of the sprawling lower town and a more up-close look at the thick stone city walls. 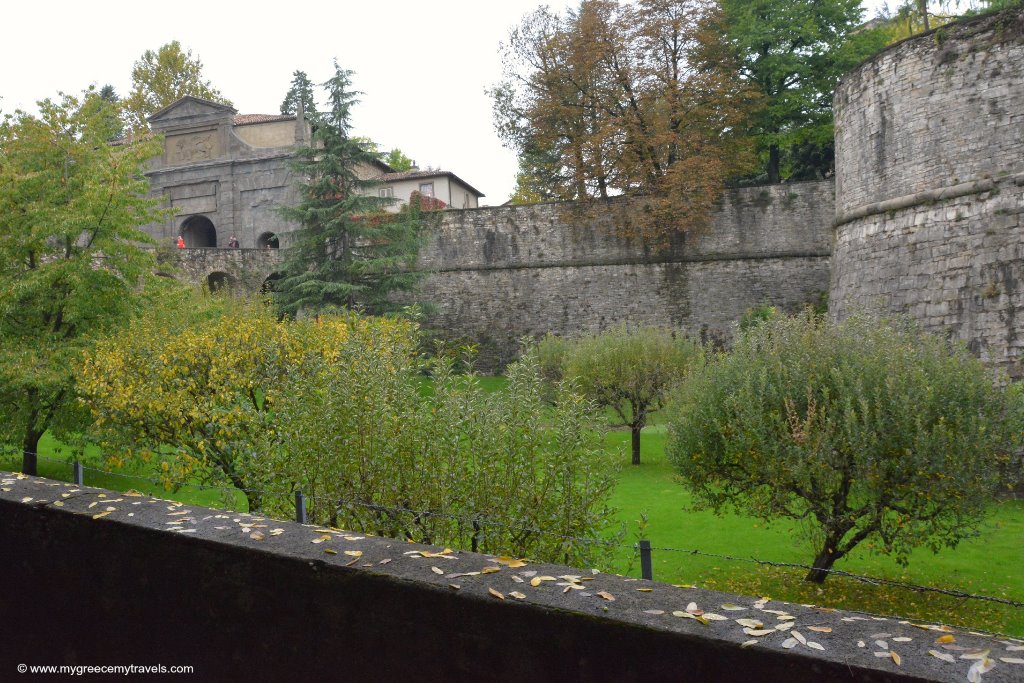 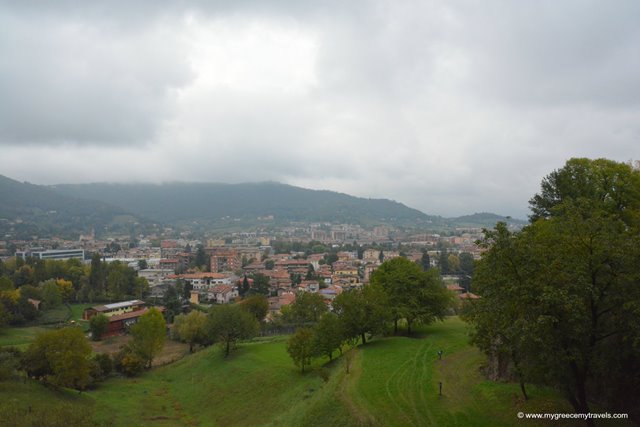 In the end, I have to say that I didn’t have much time to explore more of Bergamo’s Citta Alta. I would’ve loved to have a few more days to eat more gelato, Bergamo style pasta, snap more photos and sip a few more Aperols at leisure.

I do plan to be back one day. From my first look, Bergamo’s Citta Alta is worth exploring over and over again.

My tale of Bergamo’s two towns isn’t over!  The aforementioned Citta Bassa (known as the Lower Town) is up next. 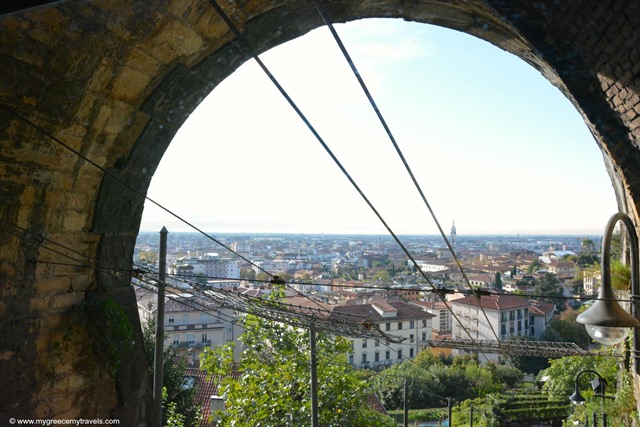 Have you been to Bergamo’s Citta Alta or Upper Town?