in budapest: the széchenyi baths

“We’re going out there?” I asked in disbelief.

I looked around for a secret door that would lead to a different spa area – particularly one that was indoors. There they were in plain sight, three round (but gorgeous) pools of steaming water set in the middle of a grand courtyard. The idea of approaching them was unreal to me since it was 8:30 p.m. in Budapest in mid-February. It was about 0°C or 32°F outside.  As I stood there, bathing suit clad and wrapped in a towel, I couldn’t help but think, “How do Hungarians do this?”

So naturally, I looked over at my Hungarian friend, Timi, in desperation.  Before I could  protest she belted out an commanding, “Run for it!” A good-natured laugh accompanied her orders. She had been great about showing me her beautiful city and the beautiful Széchenyi Baths was on the list that night. I had to follow through.

Budapest gives you the unique opportunity to bathe but not in just any bath.  The country has an amazing spa culture that dates back 2,000 years during Roman times.    There are approximately 450 public baths and dozens of them have undergone modern upgrades that qualify them as spas with services for healing, relaxation and physical therapy.

Timi took me to one of the most impressive.   Established in 1881, the Széchenyi Baths in Budapest is one of the largest medicinal baths in Europe. It’s been rebuilt and expanded since and stands proudly with its grand exterior architecture and impressive classic interior that leads you outdoors to its steaming pools. Its water is supplied by two thermal springs and the temperatures are 74 °C (165 °F) and 77 °C (171 °F), respectively.

So, we ran for it. I adjusted quickly and felt my body melt slowly into the hot water that soon became soothingly warm around me.

In the baths, we sat among other tourists and Hungarians.  Some older men even played a game of chess on one end and we guessed their wives gossiped on the opposite side. After about an hour of socializing, relaxing and walking about the water, we made a run for it again – to the sauna and showers.

I left Széchenyi with a smile. I just had an authentic Hungarian experience.  A unique spa therapy that history has been proven over time to be good for the body – no matter what the outdoor temperatures may be.

What’s in the water?

Components of the thermal water include sulphate, calcium, magnesium, bicarbonate and a significant amount of fluoride acid and metaboric acid. This is all said to aid degenerative joint illnesses, chronic and sub-acute joint inflammations, as well as orthopaedic and traumatological post-treatments. 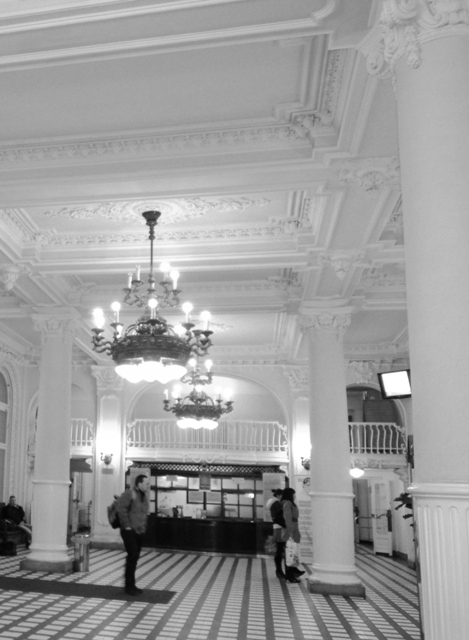